Giro’09 St.10: The Killer Pulls Out His Bowie Knife

Today was to be the day the world turned upside down in the Giro, but the course was altered due to landslides, resulting in some of the meaty climbs being cut out. Worry not, there was still some pop out there, and PEZ was right there to cover the whole plate of pasta as Di Luca delivered a very succinct message with a crushing victory. Read on!

The early part of the day’s action was animated by Stefano Garzelli (Aqua & Sapone – Caffe Mokambo) who launched the day’s successful attack on the Monscenisio, the first climb of the day, and quickly established a gap. 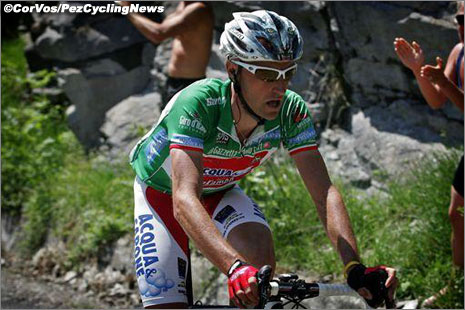 Stefano Garzelli was the lone animator at the pointy end of the race. He took home this year’s Cima Coppi. 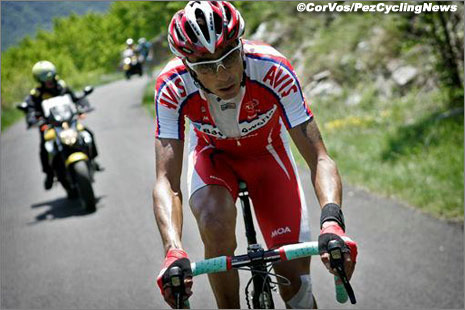 Mauricio Soler was prominent during the early going. He tried to get across to Garzelli, but there was nothing doing against the Italian.

Inside 20k it was all Liquigas, all the time, taking the front by the horns and driving the pace. The three up front, Stefano Garzelli (Acqua & Sapone – Caffe Mokambo), Andriy Grivko and Giovanni Visconti (ISD) worked like clockwork while holding a 2:00 lead, hoping to take it to the line. 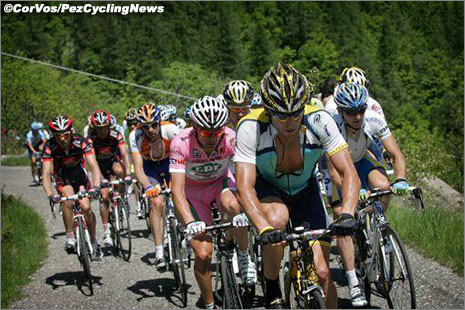 Armstrong is looking better and better as the race wears on.

Then came the much talked about Pra Martino, a steep but short little bugger of a climb near the end. And it turned out Grivko didn’t have the cash to sit at the table anymore, and he excused himself out the back of the leading trio.

While Liquigas drove, the rest of the top GC riders sat attentively watching; Menchov, Leipheimer, Di Luca, and all the rest surveyed from behind the neon green train working for Basso. Garzelli and Visconti ploughed their lonely furrough up ahead just a few km/hr slower than the chasing bunch. 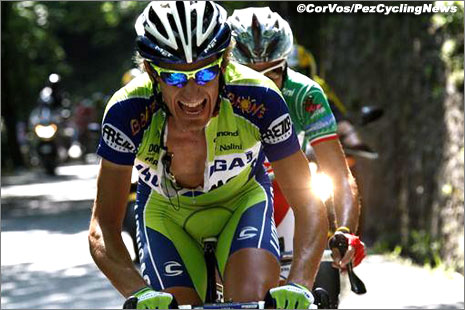 Franco Pellizotti made a great move in hopes of the win, but he couldn’t hold off Di Luca.

Di Luca moved up on the shoulder of the Liquigas train, bearing that chippy pedaling style signaling he may be wanting to attack. Instead, Pellizotti of Liquigas simply rode away from the group and quickly made the juncture to the slowing Garzelli and Visconti. Blond locks flowing from his helmet, he was clearly committed to pressing for a victory. Visconti took a pass, Garzelli dug deep to take his new compatriot’s wheel, if only for a moment. 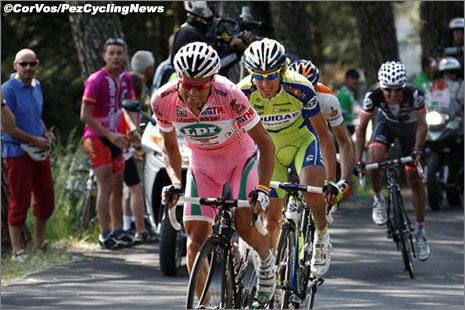 Behind, Di Luca reacted and pushed a hard pace, and the group behind all at once shattered. The team leaders made the effort to stay on board, all the helpers decided on a slower pace, including one Lance Armstrong, who had Cunego for company with the lead group still in sight. Under Di Luca’s impetus, the lead group kept Pellizotti at :12. 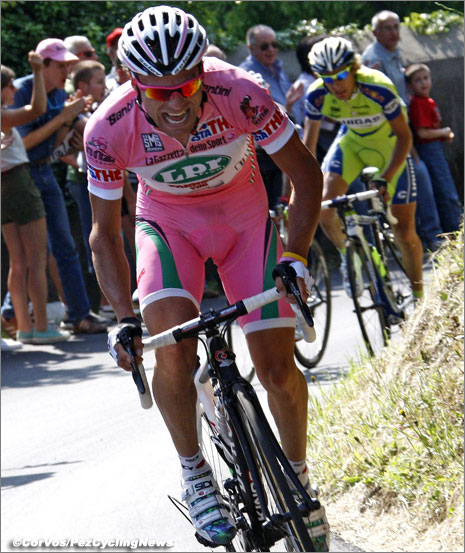 The lead chase group was 7 strong.

Over the top, the shattered group began the long and twisty descent PEZ rode yesterday and previewed for you. The Killer took to the front and simply bombed down the hill, gapping off Leipheimer among others. Di Luca caught Pellizotti, who could keep the Killer’s wheel for just a moment. Sastre and Menchov were the only two favorites who could stay within a few lengths of the maglia rosa. Behind, Leipheimer and Basso worked together to limit their losses. A true show of strength from The Killer as he was free and clear by himself in the finishing turns of the climb. He sure does talk a lot, but he’s seemingly got the legs to back it up this year. He entered Pinerolo to the deafening cheers of the 5-deep tifosi gathered on the barriers.

Despite the shortened stage, it still clocked in at over six and a half hours.

Di Luca was still out of the saddle at 300m, he gave a short look back, a point at his own chest, and delivered a clear and definitive stage win. He claimed he wanted to hold the maglia rosa until Roma, and with that performance it’s getting easier to believe that boast as truth. 10 seconds after the killer came in, Pellizoti, Menchov, and Sastre rolled in. 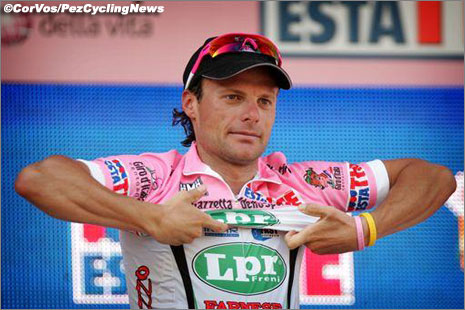 Di Luca managed to steal another :29 seconds over the nearest favorites to further tighten his grip on the leader’s jersey.