Race Report: In a display of beautiful climbing prowess, Franco Pellizotti reminded us that he too is in with a shot at the final step of the podium today, as he pounded his way to a huge solo win on the Block Haus climb in Danilo Di Luca’s home region of the Abruzzo. The stage was Pello’s, but the real action was once again from behind.

Franco Pellizotti put on an amazing display on the famed slopes of the Block Haus today. Pellizotti attacked early on the climb, and the field never saw him again. 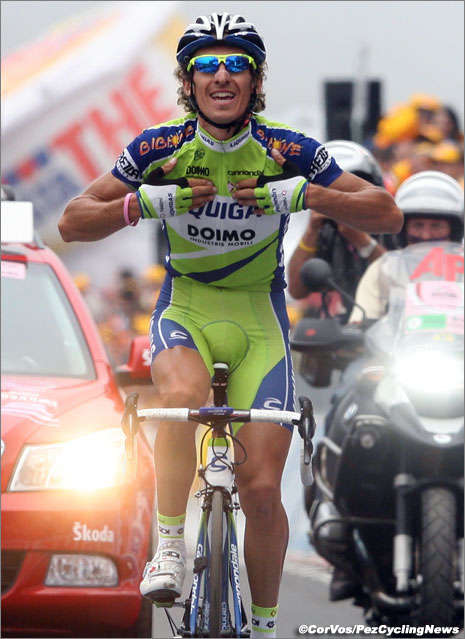 Sastre’s highly anticipated follow up performance to his dazzling Stage 16 fizzled badly and early. The only attacking Sastre did today was in the reverse direction, and right off of the podium.

Di Luca Digs To Uncharted Depths
For all of Pellizotti’s fine riding, it was never going to be enough to see him ruffle the fine fucsia and pink colors of the race’s top two. The real racing was between 1 and 2 – Di Luca versus Menchov: man v. man v. mountain. 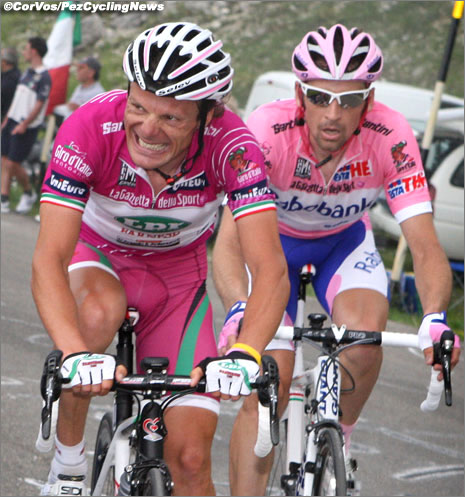 I understand that the phrase: ‘rode like a man possessed’ is beyond the realm of cliche at this point, but on a day like today, you get a chance to see where exactly the phrase came from, hell, I’ll go so far as to say that Di Luca managed to redefine it. Danilo Di Luca did in fact ride like a man possessed. His face was a constant display of utter agony and hatred. If he couldn’t drop Menchov, he surely was going to wilt all flora and kill all fauna with his satanic expression on his torrid ride upward.

I think Di Luca will be feeling this effort for a couple of years, nay, probably for the rest of his days. We’ve all seen Di Luca giving mighty amounts of stick during this Giro, but today he made it look like he had been soft pedaling up until this point. We got a chance to see into his naked soul today, and it was fierce, intense, nigh insane. 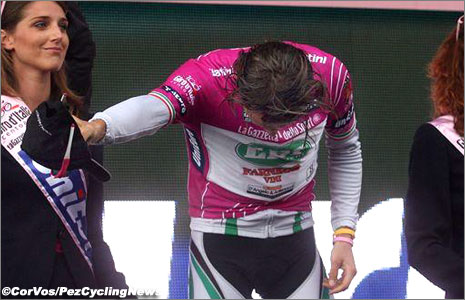 It wasn’t enough though. For all of the ugly faces, pounding pedals, rocking shoulders, and attacks – Di Luca could not be rid of his parasite. Menchov calmly followed, never once looking to be under any kind of great duress, until Di Luca attacked one last time in the final 200m. He lost a whopping 5 seconds there, but there we finally saw the man break down. Menchov, who has made nary an expression since he was born, found himself exercising muscles he didn’t know he had on the line. Menchov, for all of his non-faces, does in fact hurt, he just reveals it around 150%. 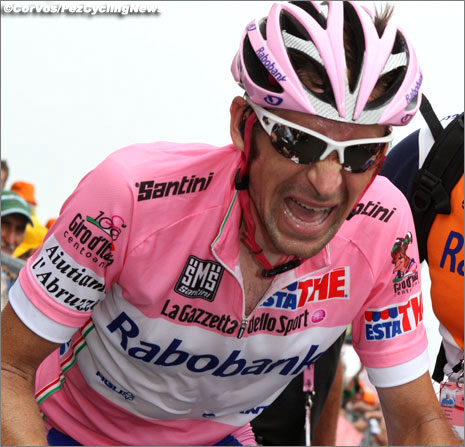 Menchov ascended Block Haus as the opposite of Di Luca. Where Di Luca hunched low, rocked hard, made diabolical faces at the pavement, Menchov sat high in his saddle, pedal stroke smooth and powerful, face a picture of, well, nothing.

It is done. We can all hope for miracles and wonder if someone might be able to drop way back, close their eyes, and toss a Hail Mary, but it ain’t happening. The only way Menchov will be unseated from his pink throne is by way of accident, desperate illness, or doping positive, and I really hope none of those occur.

The Race
Much has been made about this decidedly peculiar seventeenth stage of the Giro. It comes directly after the final rest day, numbers just over 80 kilometers, and contains one helluva big mountaintop finish: Block Haus. Many wondered how it would be raced, would the race be on from the gun, would the attacks go from a long way out, etc etc. The answer? It looked pretty much just like a normal stage of any Grand Tour, just about two hours shorter.

The break went early, it stayed away until the lower slopes of the final climb, the favorites went hard, the strongest on the day rode away, there you have it. See, there really is merit in shorter stages. 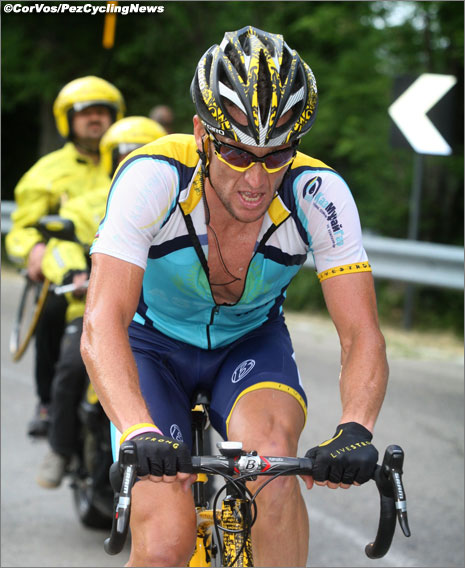 On the early slopes of the Blockhaus, Liquigas took charge, then off went Franco Pellizotti. Pello quickly rode out to a gap, and then what’s this? Lance Armstrong followed. Armstrong tried to get across to the smooth going Pellizotti, but in an agonizing display of not going to happen, he didn’t. About the time it was clear that Lance had no hope…Di Luca clocked in, and made sure everyone knew that this was HIS climb.

Di Luca Erupts, Pt. 1
In one stern effort, he got rid of nearly all of the offending riders who dared follow his furrow – just like that, all that were left: Di Luca, Menchov, Basso, and Garzelli. From then on, it was the Killer ALL the time. No one even so much as made a move in contemplation of doing something. It was dangerous to try and come around the guy, he might have eaten the man who tried. 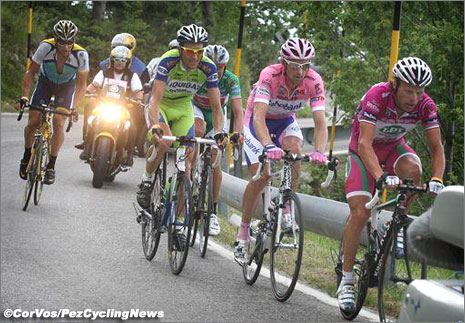 Di Luca never turned around, never asked for help, never so much as acknowledged that anyone was even there. Hell, he might have thought he was solo.

Up he went, tearing after Pellizotti, but not making any ground. For all of the brute force, courage, and panache some will say Di Luca displayed, it just wasn’t good enough to catch the curly blonde up the road. Di Luca could well have made baby’s cry with his face, but his legs were only second best on the day, no question.

Di Luca Erupts, Pt. 2
Towards the top, just when it was looking like Pellizotti might pull off a minute, Di Luca snapped to and entered a new realm of suffering – he attacked again, dropped all but Menchov, and gave a positively graphic display of using every muscle in your body to go faster.

It’s not hard to see where he was getting the extra gear from though – he had a small army chasing him up the slopes. This was Di Luca’s home, his army was there to love, adore, and support him, and support him they did. In normal races, motorbikes and cars follow the riders – at the top of the Block Haus – all you could see were people on foot, chasing after their suffering hero, urging him forward, doing everything they could to give him that last little bit to get rid of the implacable Russian.

Di Luca’s penultimate attack wasn’t enough to get rid of Menchov though. He just couldn’t do it, nor could he sustain the effort, and soon Garzelli caught back on, Basso wasn’t much further behind, but there it was: Ultimo Chilometro.

Di Luca Erupts, Pt. 3
As Pellizotti was enjoying his moment in the fog up high on Block Haus, Di Luca put in one final dig, and this time he did get rid of Menchov, but not Garzelli. Garzelli, like Di Luca, smells finish lines like a ‘coon dog, and this time was no different. Garzelli beat Di Luca on the line though, and in that moment, Garzelli became Public Enemy Numero Uno in the Abruzzo. 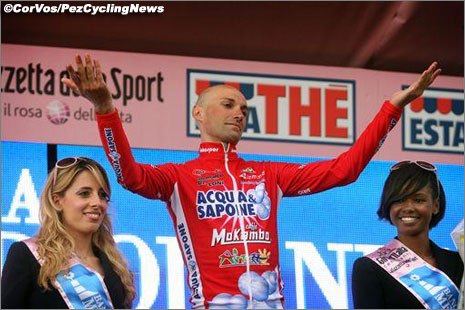 It wasn’t a pretty sight to behold when Garzelli took the podium this afternoon.

Choose Your Own Adventure: Stefano Garzelli
I too am not terribly sure about Garzelli’s move. Did it warrant the outrageous booing he receive onstage afterwards? No, but it did take away some very valuable bonus seconds from Di Luca. Garzelli has no hope of the overall, nor does he really have a GC spot to defend, so the 2nd place was good only for the 2nd place of it on one of the sport’s great mountains. He didn’t need the mountain points – he’s cozy on top there. The 2nd place wasn’t necessary, it was for Di Luca, however.

It’s hard to criticize Garzelli for racing though, because that’s just it: it’s racing. He shouldn’t be expected to put his personal ambitions aside in a moment like that – screw Garzelli, that sweet 2nd place was his. BUT, had he set his ambitions aside just a little bit, he would have been a hero in Abruzzo, he would have had a huge debt in his favor from the Killer, and we’d be talking about Garzelli’s ease off to allow Di Luca the bonus seconds for a long while to come. That’s all. He wasn’t wrong to do what he did, but he could have come out way on top had he ridden differently…in my opinion.

Speaking of Garzelli: he has to be one of the big surprises of this Giro. Garzelli hasn’t been a real factor in a Giro in a fairly long time, and suddenly this year, he has been involved in all of the important proceedings in every stage save for one – and that’s why he’s 8 minutes down.

Other Victims On Block Haus
As previously mentioned, Carlos Sastre was a big loser today. Every bit of forward gain he made on Stage 16 was taken back with interest today. He never looked to be in it, and this time, he didn’t spring back to life and go roaring off into the sunset with yet another mountaintop victory.

Levi Leipheimer was once again a shell of his former GT overall threatening self. He just didn’t have it. I’m guessing there’s something going on behind the scenes here – injury or illness would be my guess.

Lance Armstrong showed some more sparks of goodness today. He was at the tippy top of the front of the race early on the Block Haus, trying to make the race happen, but his engine isn’t quite where his motivation is just yet. I think that difference will be minimized in a couple of months time. I’m starting to wonder if we shouldn’t be a bit nervous about Armstrong’s upcoming Tour bid. 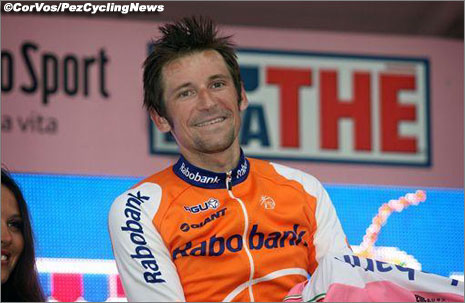 Another happy day for Menchov on the podium.

Let’s Wrap It Up
Menchov again did what he needed to today. Di Luca did all that he could, but it wasn’t enough. Some will say he should have attacked more wisely, perhaps more often, or harder, but I don’t know about you – that man looked 100% maxed out. When he attacked, he looked like he was in Zone Purple (that’s two notches above red if you were wondering). He did the best he could with the gifts that he has plus an extra million percent in hometown motivation and a whole region’s hopes on his back. Another good ride for Di Luca, another few seconds to the good for him. Tomorrow should be interesting. If Di Luca could manage to break Menchov just a little bit earlier, and then ride the time trial of his life? I dare not say it.

Questions? Comments? Angry? Happy? Sad? Let me know your thoughts. I have some opinions, I’m always ready for a debate: jered at pezcyclingnews dot com.
Like PEZ? Why not subscribe to our weekly newsletter to receive updates and reminders on what's cool in road cycling?