Race Report: The stage profile had ‘perfect for a breakway’ stamped all over it, and that’s precisely what happened. It wasn’t quite a day off in the peloton as the speed was high all the way, but with twenty-five riders eventually getting clear, it was a truce for the overall contenders.

Gianni Savio’s Diquigiovanni team are revelling in a third stage win on this year’s Corsa Rosa, thanks to a perfectly ridden day from Michele Scarponi. He won solo in Innsbruck two weeks ago. Today, he was the smartest in the big group, made the spilts when it counted and comfortably creamed his remaining companions in the small group sprint. 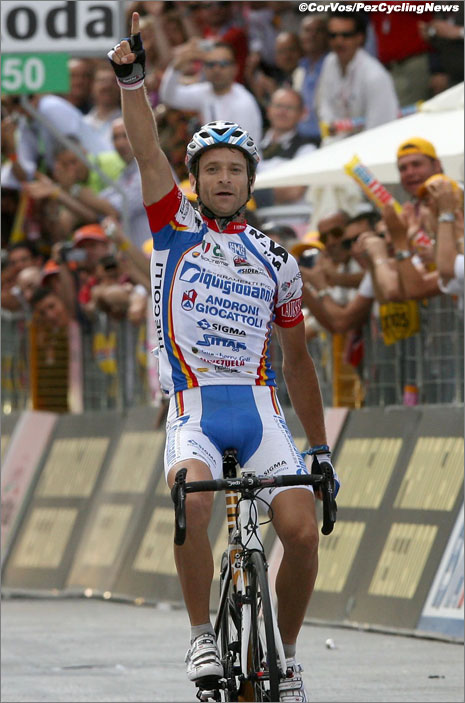 America’s Danny Pate was pipped on the line for second by Felix Cardenas – the young Garmin rider just ran out of gas as the finish line loomed.

The early lumps and bumps caused no major problems – just loads of attacking as escapes got away, failed, got reabsorbed … repeat. 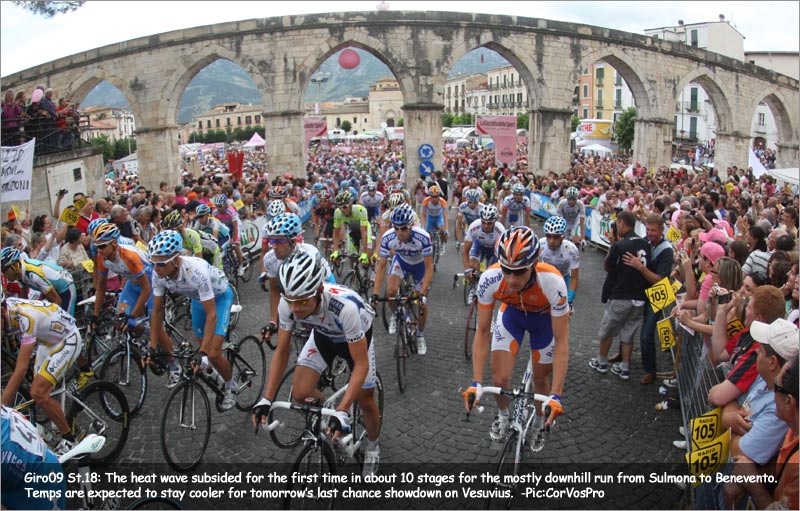 Eventually, the right move did go, and it was all a bit Biblical as the breakaway riders made like animals escaping the floods in good old Noah’s ark: two-by-two. 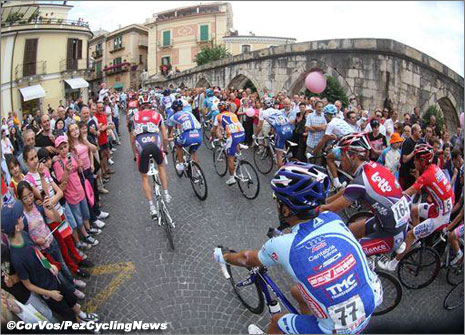 In the peloton, Garzelli and Di Luca had an amiable summit meeting, rolling along discussing Garzelli being roundly booed by the fans at the stage finish yesterday. The green jersey leader Garzelli sprinted ahead of Di Luca for the mountain points but also swiped some vital bonus seconds from ‘The Killer’- darling of the home fans.

What was Garzelli to do? Roll over without a fight? This is bike racing, and Di Luca backed him up. There are pats on the back and it’s all pals again.

The helicopter camera picked out Pez favorite Dario Cioni pulling over for a new front wheel as the peloton rolled through Piedemonte Mantese. 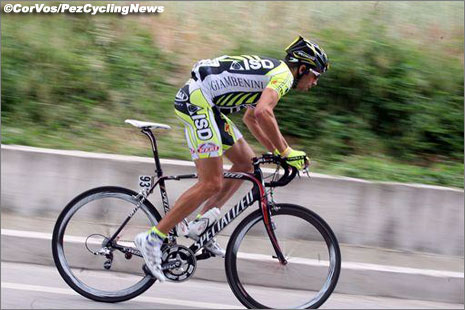 Up ahead, Gavazzi and Deignan are sporting cuts, bruises and ripped racing kit after a tumble. Deignan gets some band-aids from the race doctor and he’s back in the move again.

The peloton ramps up the speed with 40kms to go. Rabobank string it out, and Menchov looks like some sort of gangster with some very neatly sculpted stubble.

Eventually, Grabovskyy attacks from the break, and McCartney follows. 25 together is far too big a number to stay together. It’s the smart Scarponi who tows a handful of riders across, with Seeldrayers sitting right behind Masciarelli – his rival for the white jersey of best young rider. 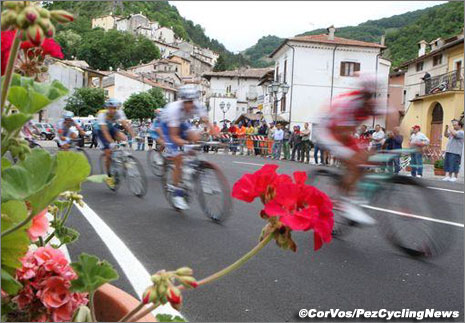 Devenyns and Bak jump clear from the first eight-man grupetto, but it’s all back together as they roll through the finish line to start the finishing 7.5km circuit.

The lead group has completely fractured, but with 3.5kms to go, we’ve got six clear: Bak and McCartney, Pate, Cardenas, Scarponi and Devenyns. Odds should favour the SaxoBank duo of Bak/McCartney … but you never know at the end of a long, hard Grand Tour stage. Grabovskyy gets up to them as the road tilts up slightly. It’s a nasty cobbled finish – not for pure sprinters. 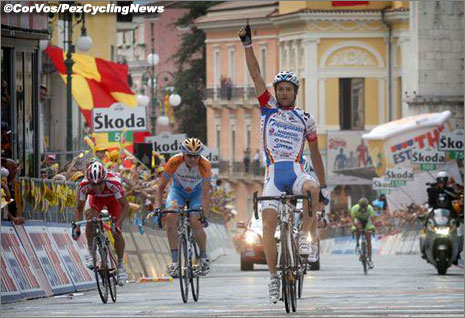 It’s the magnificent seven survivors together as they go through one kilometre to go. 800 metres to go, it’s uphill and Devenyns has stretched ahead by about 15 metres, but he’s cooked and pulls to the side of the road, cooked.

Danny Pate tries to go through a gap but just doesn’t quite have the legs. He loses momentum and Scarponi grinds clear and has time to savour his second stage win of this Giro. 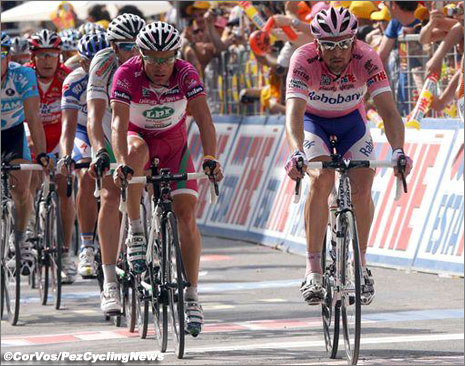 Rabobank drag the peloton through to the finish about four minutes back and Menchov ends side-by-side with Di Luca, so no overall changes ahead of tomorrow’s last chance saloon ride up Mount Vesuvio.

Loads more to come on Pez, with Ed on the roadside! Don’t touch that dial!