Here at PEZ, we are unabashedly Italo-philes. After the racing and the riding and the eating and especially the drinking, comes time to learn some of the language. While pointing and sign language are acceptable ways to communicate with accommodating Italians, throwing around a few choice words garners appreciation, throwing around cycling ones earns you Serious Bonus Points.

When I first arrived in Italy over 11 years ago, I was pleasantly surprised to learn that they had a word specifically for harvesting grapes, vendemmia (they’ve got one for harvesting all of other things also). And why shouldn’t they? Such is the cultural, historical and economic importance of wine. Cycling’s importance also merits having its own terms [note: the French can make the same claim, many of their words have even become integrated into English, but who cares about those]. What follows is a brief lesson we’re calling Italian for Cyclists, broken into various, logical groupings.

1. Everything in Italian is pronounced, unlike English where we slur things and some things are just there for looks.

2. Every letter is pronounced as it’s written, no irregulars.

3. The accents usually fall on the next to last syllable.

6. “GIO” at the end of words is pronounced JOE, not GEE OH, Joe DiMaggio should start and end with the same sounds.

7. Italians are usually very good at speaking Italian (though they aren’t very adept at English), so if you get close to the approximate pronunciation and grammar they will gladly fill in the rest.

8. When in doubt, add an O or an A to the end of an English word and hope for the best.

Fondista (phone DEE stah) – Fausto Coppi is considered the ideal embodiment of the fondista; agile, all-arounder that shines when the roads point upwards. The modern equivalent would be someone like Contador. 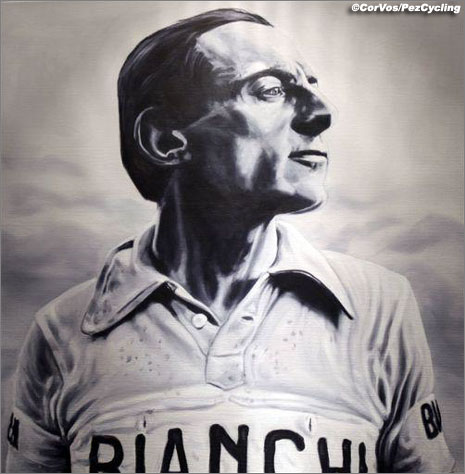 Passista (pahs SEE stah) – Francesco Moser fits the bill here. The passista is a big, powerful rider able to maintain 50 km/h for an hour at the front of the peloton. Their strength and toughness make them naturals in the northern classics. 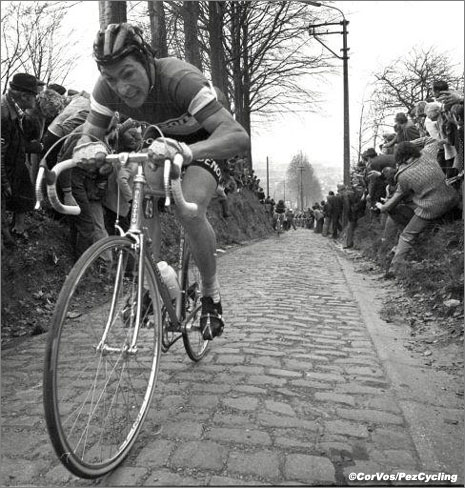 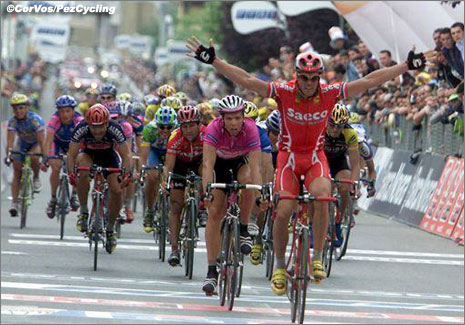 Scattista (skat TEE stah)– The scattista is a quick burst rider, someone that has deceptively great speed, that can attack on short climbs or take a sprint victory from a reduced pack. Paolo Bettini is an excellent example. 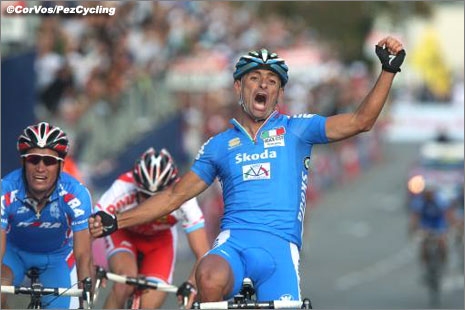 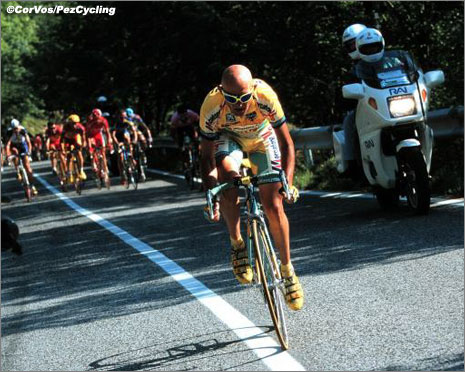 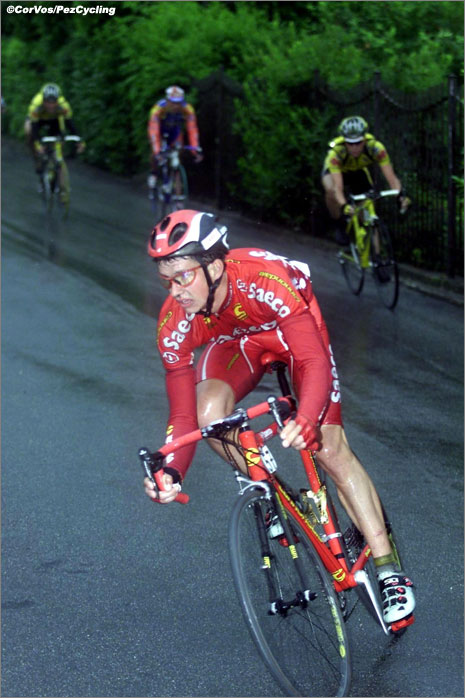 Attacante (ah tah KAN tay) – This is one of those guys that are always attacking, even when it doesn’t make sense, see Johnny Hoogerland 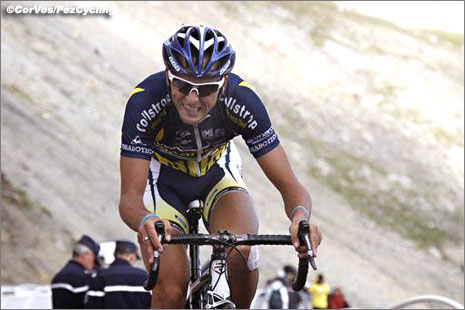 Gregario (greh GAR ee oh) – Italian for domestique, who serves the capitano – Matteo Tosatto serves as a great example of the embodiment of the gregario. The car in the back with the director and mechanic is referred to as l’ammiraglia (lah meer RAL g’ya) which translates as flagship. 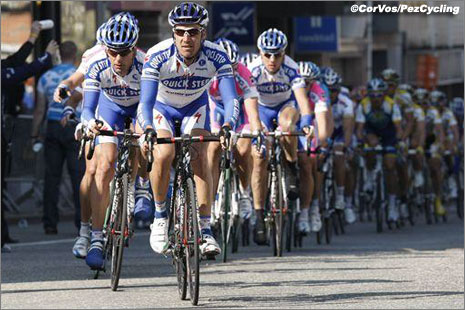 *Often a rider has several characteristics, hence these terms can be combined, for example a Passista Scalatore would be a strong guy that defends well in the climbs. Or if the rider is a specialist, the term “puro” or pure is added, as in Scalatore Puro.

gruppo compatto (GREW po come PAHT toe) – Compact group, when the whole peloton is together or when the peloton catches up to the breakaway. 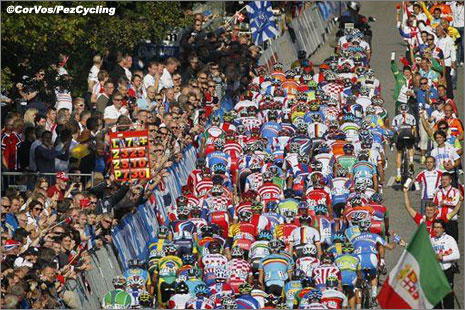 attaccanti/contrattaccanti (ah tah KAN tey / kon trah) – these are the attackers and chasers that reel in the breakway cyclists.

scattare in faccia (ska TAR rey in fah CHA) – This translates to ‘take off in your face’ and means blowing someone away, see The Lance Look – ok, not a picture of the Look, but it happened a few minutes before this moment. 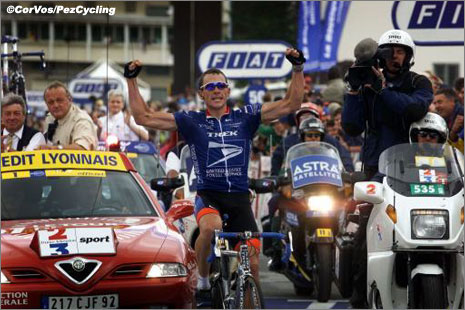 staccati (stah KAHT tay) – to break off, getting dropped 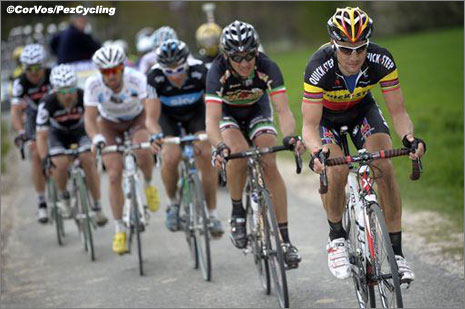 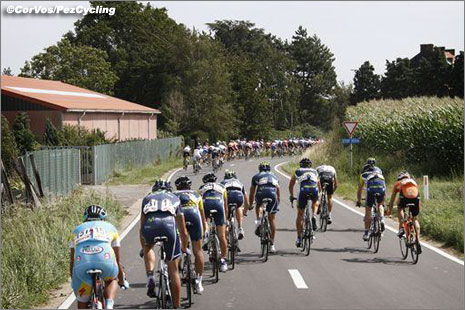 ventaglio (venn TAHL y’oh) – After the group has been blown apart, this describes cyclists riding in a diagonal form as protection from cross winds 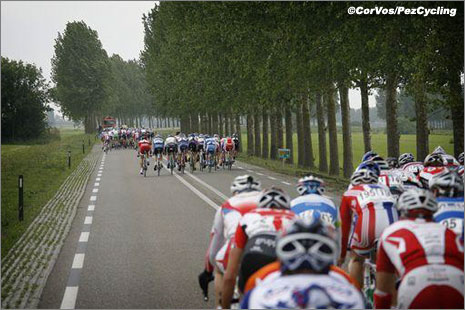 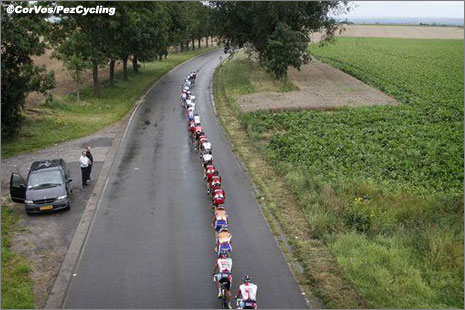 i fuggetivi (fu jet TEE vee) – meaning escapists, these are the breakaway riders 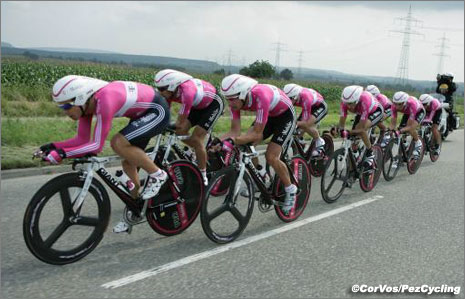 fare l’elastico (FAR ray LAST ick oh) – ‘Making the elastic’ is the rubber band effect when a fast peloton goes around corners or other obstacles, the ones in the back have to brake harder and reach speeds of 80km/h to catch back up to the main group. 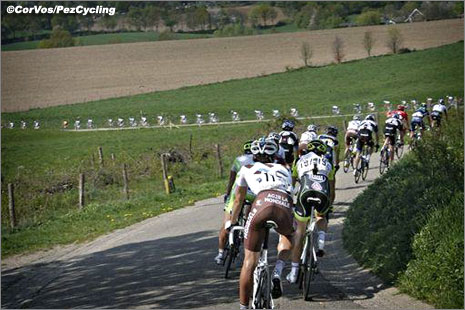 **It’s little wonder that most of these terms deal with the initial, crucial phases of the race where constant attacks try to establish a breakaway.

pedalata dura (DOO rah) – dura means hard and is not a good sign, it can also be referred to as a pedalata legnosa (len YO sah) or wooden, also a bad sign

pedalata in scioltezza (shoal TET zah) – taken from the Italian word for melted, in cycling jargon it means smooth, similarly a pedalata agile (ah JILL lay) describes the agility or ease of one’s effort or the freshness of their legs. In fact, the 25 through 28 cogs are often referred to as rapporti agili (rah PORT tee).

punta di sella (POON tah dee SELL ah) – if a rider is described as on the ‘point of the saddle’, he is positioned all the way forward on the saddle and is burning up the track

pedalata di punta (dee POON tah) – punta means point, or in this case, tip of your foot and refers to pedaling with one’s feet pointed down. A pedalata piatta (PEE ah tah) is flat, while a pedalata di tallone (tah LONE eh) or tendon means the heel is lower than the pedal axle, a la Merckx.

***Many oldtimers are aghast at the ugly pedaling seen in today’s pros, claiming that clipless pedals are the culprit. The importance of their complaint becomes apparent when considering how many words they have for pedaling.

giornata no (jor NAH tah NO) – A ‘no day’ means you’re not winning this race – in this case, one of the most famous giornata no’s in recent history – Jan Ullrich’s colossal ‘no day’ at the Tour de France in 2008, which gave Marco Pantani (see above) the overall lead. 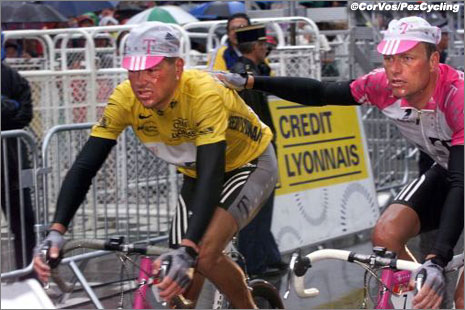 fatto (FAH toe) – ‘being made’ in cycling refers to doping

la bomba – ‘the bomb’ was an amphetamine cocktail popular in Coppi’s time, one memorable interview with him went like this. Interviewer: “Mr. Coppi, have you ever taken the bomba?” Coppi: “I only take the bomba when I need it.” Interviewer: “And when do you need it?” Coppi: “All the time.” He continued: “Everyone denies taking the bomba, but watch out getting near them with a lit match!”

circuito (cheer KEW it toe) – a circuit, for example races like the World Championship where the same course is repeated several times

cima Coppi (CHEE mah koe PEE) – describes the highest mountain in the race, it awards riders the most points in the GPM or Gran Premio della Montagna classification

sali-scendi (SAH lee SHEN dee) – literally ‘raising-falling’ refers to hilly roads where one is either going up or down all of the time, visit Tuscany to live it for yourself

piano/falso-piano (PEE ah no/FALL so) – piano means flat terrain, whereas a falso piano is a “fake flat” these occur in climbs where the road flattens out for a brief stretch before returning to its normal rise.

muro/strappo (MOO row / STRAH poh) – A muro is a wall, these are usually hard, yet short climbs, sometimes referred to a strappo meaning tear. A strappo can also be a stretch or section. Pictured below – the ferocious Muro di Sormano – once a part of the Giro di Lombardia. 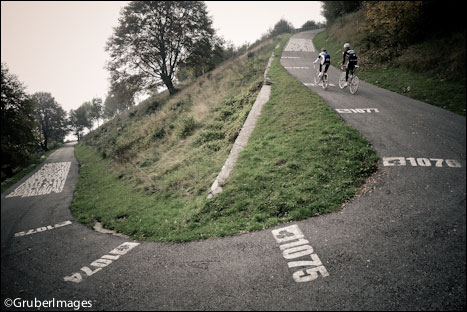 la volata (vo LAH tah) – Meaning flight, in cycling it refers to the sprint finish. A volata corta (KOR tah) means a short one taking place in the last couple hundred meters, while a lunga (LOON gah) starts further back. Volatas can be referred to as corretta (kor RET ah) when everything goes smoothly or scorretta (skor RET ah) where things don’t. 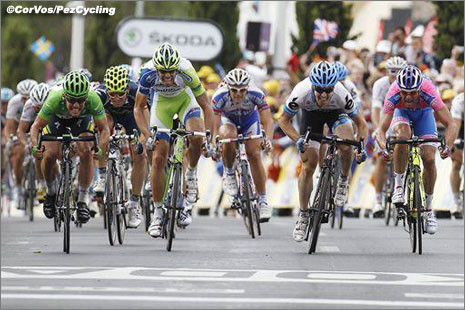 treno or trenino (TREY no / trey NEE no) – Sprint leadout train or a smaller, reduced train. 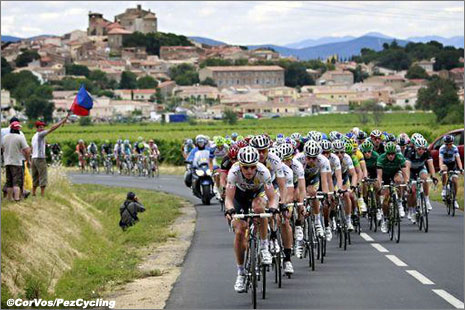 vittoria a mani basse (vit TOAR ee ah ah MAH nee BAH see) – ‘victory with low hands’ or winning the race with one’s hands still in the drops is good, but not the most glorious way to win a race, better is vincere per una ruota/bici (veen CHAIR rey pear oona rew OAT tah / BEE chee) or wining by a wheel or a bike’s length.

However, the best is vincere con distacco (CONE dis TACK oh), winning by a good margin, with enough time to zip up that jersey, raise the hands and salute the heavens. 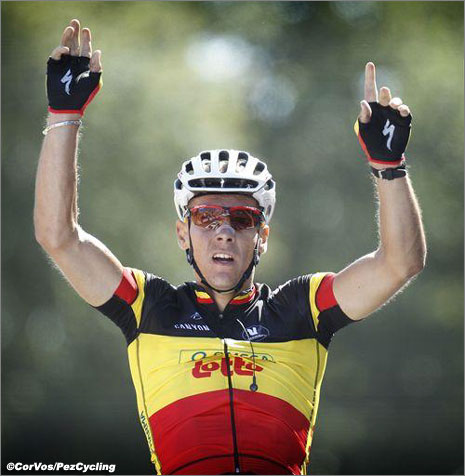 Cambio (KHAM bio) – taken from the word for ‘change’, in this context it means the rear derailleur

Forcellini (for CHEL lee nee) – these are the drop-outs, front and rear

Pignoni (pin YO nee) – sprockets, the whole cassette is the pacco pignoni

Campagnolo (kahm pa N’YOLL oh) – means someone from the country. In this case it’s the family’s last name. “Mario Rossi” is the Italian equivalent of “John Doe”, the generic name used to fill dummy forms.

Dura Ace (doo RAH chay) – most pronounce this gruppo as one Italian-ized word, remember the “C” followed by “E” or “I” has a CH sound. Centaur (CHEN tower) is another example.

In bolla (in BOW lah) – this means the saddle is perfectly flat, ‘bolla’ means bubble and it is a reference to the little one in a level.

Some Speaking Pros:
There are lots professional cyclists that speak Italian to greater or lesser extents. Many live and train here or perhaps ride for Italian teams. Also the DS world is full of Italians, so many terms proliferate thoughout the peloton. Based on interviews from RAI TV, Pez grades a few personalities.

Cadel Evans: Cadel is married to an Italian and has close ties to Italy from his start with Team Mapei and relationship with Dr. Aldo Sassi (RIP). Cadel’s Italian is really quite good, but his pronunciation is atrocious. Bonus points awarded for effort, he likes speaking the language and always cheers up for interviews, unlike his sometimes grumpy English ones. Grade: B

Eddy Merckx: Eddy’s Italian is excellent, obviously due to his long career with Italian teams, the industry and media. Grade: A

Alberto Contador: Spanish is so similar to Italian that one can pretty much understand everything, though Contador makes very little effort, speaking mostly Spanish. Every now and then an Italian term is thrown in for appearances. The media and fans like to play with his name “conta d’oro”, meaning count the gold or gold counts. Grade: NA

Vincenzo Nibali: originally from Sicily (where they really don’t speak Italian), Nibali’s transplant to Tuscany – the region of Dante, the father of modern Italian – at a relatively young age has enabled him to learn Italian surprisingly well with little trace of a southern accent. However, he often suffers from the typical athlete syndrome of relying on cliches like “take it one day at a time”. Grade: A- 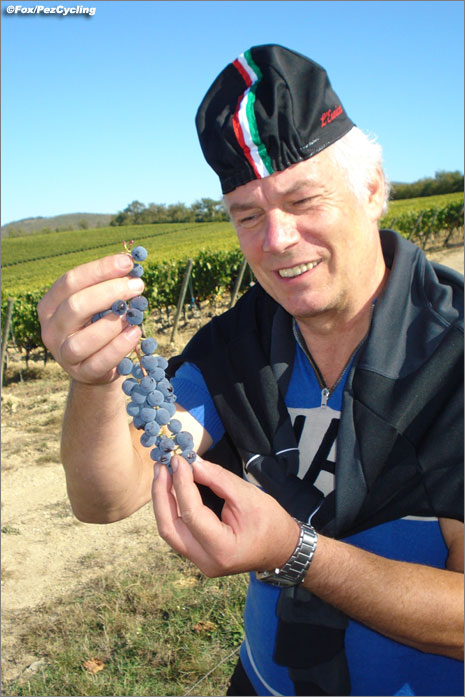 Giro di PEZ: A Quiet Day On The Stelvio