PCN correspondents Duncan Steele and Armando Gennarelli were “live and in-person” at the Giro 2003 presentation in Milan on Saturday. We talked with several riders about the route, which has a little something for everyone.

Our full route review will follow Monday, but here’s what some of the riders had to say… 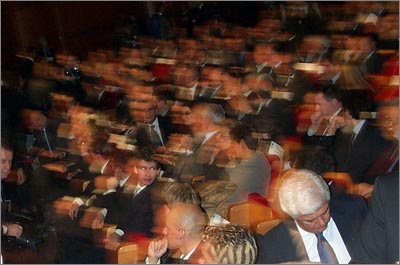 Davide Cassani: ex cyclist and commentator on Rai TV “It is a complete Giro, not the toughest but there should be a lot of riders in with good chance, could suit Frigo or Aitor Gonzalez” 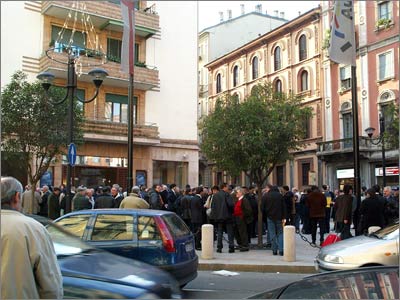 The Giro presentation, although carried live on tv in Italy, was was barely visible from the street save for the milling crowd of prominent Italian sports stars… 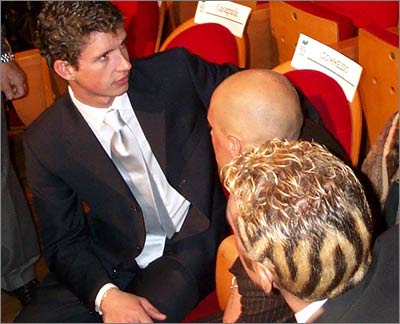 The 2002 Giro surprise winner Paolo Savodelli, and recent telekom signing: “A great course, all in Italy. I think the last week will decide everything and the selective days will be Stage 14 at Alpe di Pampeago and the 18th which arrives at Chianale. I hope to be riding the Giro but this will be confirmed later.” We had no comment from the rider with the interesting hair-do. 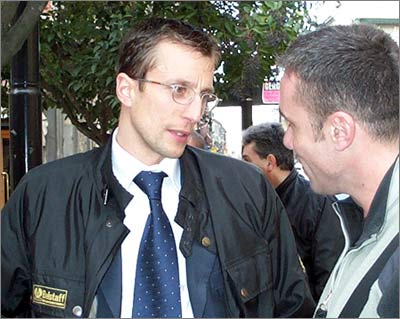 Maurizio Fondriest thinks: “It will be a battle between the climbers and not the Cronomen who defend in the mountains. The usual favorites Casagrande, Simoni, Savodelli (if he rides as he has now signed for Telecom) and keep a look out for Caucchioli and Gonzalez.” 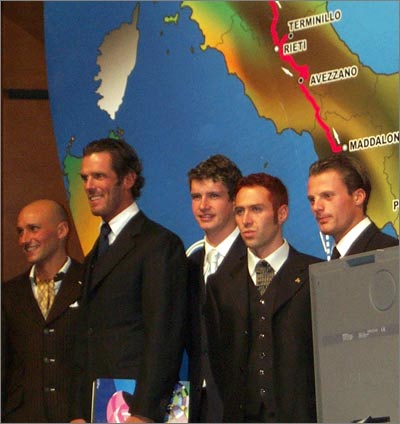 Gilberto Simoni: “I like it, it’s going to be between us climbers and if I had to pick just one rider I would say Gonzalez. For me the key stage will be the 14th with the finish at Alpe di Pampeago or the 12th arriving on Monte Zoncolan and if I had a choice of winning a stage it would Pampeago. By the way, I LOVE CANADA!” 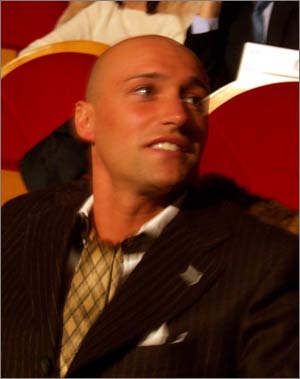 In a room full of sharp-dressed Italians, Stefano Garzelli looked “smashing baby!” and is looking forward to putting 2002’s ousting behind him and regaining some past glory “It is very much like the Giro in ’97 and 99, it should be fun!”

Di Luca:”My aim is to help Simoni and to win a couple of Stages, it’s a nice Giro for Simoni to win and for a lot of riders to do their bit.” 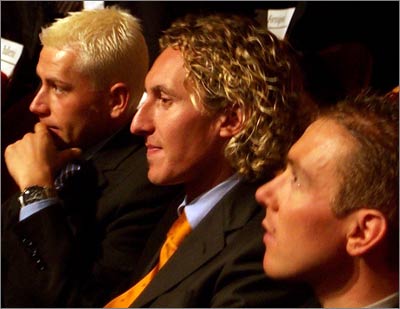 Caucchioli: “It will suit the climbers and the 82 kms of TT will give it a bit more spice. I am working not only on going up the tough climbs but I am also working on coming down them better!! I see Gonzalez as a rider to watch.” 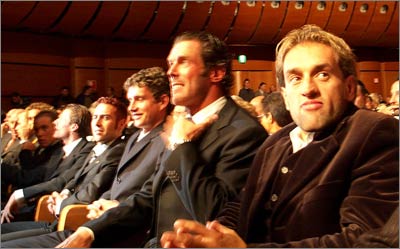 Who me? Why I’d love to win the first stage and set more records… The Re Leone Cipollini: “It’s a complete Giro. There is a bit there for everybody.” Ivan Gotti may have his own ideas…

OTHER STUFF
Pantani is training in Greece and likes the Giro and wants to be a big part of it. But we have heard all that before haven’t we!!!

The Giro should finish in Piazza Duomo, 50 years after it finished there last time in ’53 a Giro that was won by the Great Fausto Coppi, but has not been confirmed.

So it seems a well balanced Giro that everybody likes. A true Giro d’Italia that stays in Italy. The name that popped up a lot between the cyclists was Gonzalez and the TV Journalists say Caucchioli.
Don’t forget that if Cipollini wins the first stage in Lecce he will equal Binda’s record of 41 stage wins in the Giro. Not bad for an old man eh!! And who is going to beat him??

Next time please send me on a mission that have PODIUM GIRLS! See ya Duncan