Serguei Gontchar did what he does best – hammering his Time Trial gears like a demon – to romp home in the final stage of this year’s Giro d’ Italia. But blowing kisses to the fans as he finished, the Maglia Rosa rested firmly on the shoulders of an ecstatic Gilberto Simoni. 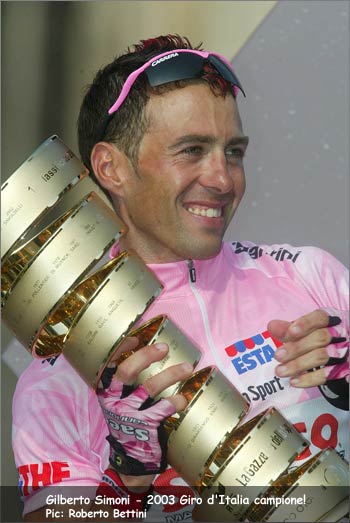 Today, big Magnus Backstedt set the early pace over a dead-level 33km course into Milan. The Swede led for a long time, and confirmed his victory in the Intergiro contest, dipping under 40 minutes for the test. But with Simoni’s lead safe, the biggest battles were for the stage win, and 2nd and 4th on the final classification.

All eyes were focussed on Garzelli and Popovych fighting for the runner-up spot, and although the young Ukrainian did briefly gain on his Italian rival, the more experienced Garzelli put in a storming climax to salvage a couple more seconds and keep his 2nd place.

Likewise, Andrea Noe held on to 4th ahead of Totschnig and Rumsas – a surprising but deserved result after 3 weeks of hard slog for the Alessio rider.

Ultimately, top man on the day was Ukraine’s former World TT champion Gontchar who produced a blistering 52 km/h average to nip the Fassa Bortolo triumvirate of Bruseghin, Gonzalez and Frigo. Simoni himself eventually coasted home in 18th place on the day, but enjoying every second of his procession into Milan.

All the praise must go to Simoni this year. After a miserable 2002, which saw him disqualified from the Giro, the Saeco man was supreme when it counted in the mountains; smart when surprising Garzelli to pull out vital seconds on the undulating 10th stage; and gutsy when putting time into his main rival in the first TT. ‘Gibi’ also takes the points title after the demise of Alessandro Petacchi, to go with his 3 stage wins and Azzuri d’Italia title.

Now that his principle aim has been taken care of, who’s to say what he’ll do in the Tour de France? With a free rein to create havoc, Lance Armstrong will have to keep an eye on Simoni in July.

So what did we learn over the last 3 weeks? Simoni is awesome; Garzelli’s a fighter; Petacchi is the new Cipollini; Cipo’ is not quite the old Cipo; Pantani’s not finished; Popovych is going to be the biggest thing in road racing over the next decade.

And the Italian drug squad were conspicuous by their absence.. maybe things are changing for the best.

Let’s wait and see if the Tour can match up to the drama of the Giro!