After a long awaited win for Cipollini at this year’s Giro, the question started to fly around that maybe he wasn’t “in forma”, had lost his sprint, his power, was too old and maybe has really had enough of cycling after a few years of moaning. Then there was the story that the team had abandoned him and no longer believed in him… Was all this really true or was it just that Petacchi was too good and hit his moment? 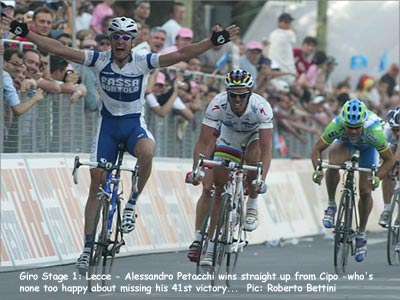 Not happy to let these things pass by, I phoned a few people who are in the knowin Italian cycling and a few of Cipo’s team members to find out the real truth. I was lucky enough to to spend some time with Cipo and a few of his team this winter, when Cipo was pretty relaxed (at the Giro,relaxed he wasn’t!). He’s a good guy, not easy going, but has a time and place for everything. He needs everything in good working order and demands total commitment from his team. But as Bennati said this winter ” An in forma Cipo is unbeatable” …so why wasn’t he winning??

I got a few answers that I had heard all before, usual stuff…..THEN someone said to me ” I’ve never seen Cipo be anticipated in a sprint, Petacchi is constantly doing it, ever asked why?” Wow…I asked this to a few other people and they confirmed it as well.

To explain what I’m getting at, can you remember all Cipo’s other sprints with his “Treno”? Can you remember what some of his team members said? Cipo likes sprinting from the front, going in progression to the finish, going off Lombardi’s wheel at top speed, slowly increasing his speed in the last 200mtres leaving the others in his wake.

SO… I looked at his sprints in this year Giro… and yes it was true… when Lombardi led out the sprint, instead of all the others fighting just to hang on to Cipo’s wheel because the speed was hell, they were bunched up waiting for Cipo, Petacchi even anticipating and winning by a good margin. Lombardi is having difficulty in reaching the speeds of last year, so poor old Cipo isn’t getting his usual clear run at the finish post and not winning like he is use to. So children, be good girls and boys and don’t write off Cipo (I’ll put money on him being excepted in the Tour, Preatoni, Domina’s owner is meeting LeBlanc as I write this and I’m sure nothing can’t be solved that a big cheque normally solves!!) and Cipo will be back winning in his normal style and flair when Lombardi find’s his legs and correct body weight again.