The countdown is on – only 5 days till the start of the Grand Tours – the 86th Giro d’Italia hits the road at full gallop with 192 km road stage in the south eastern city of Lecce. The Giro has had it’s share of trouble in recent years – flamboyant police raids, disgraced leaders, arrogant tv producers choking more life out of their national Tour by demanding outrageous sums for tv rights – for sure ne’er a dull moment! Add to the mix Italian “passione” and always unpredictable weather, and you’ve got a stage set for epic battles. PCN historian remembers some of the most “epic” of Giri…

The birth of the Tour de France in 1903 had been watched with increasing interest in Italy. It was joked about during the first years, but soon became a way to promote cycling – and especially its specialised press – some years after. Two major Italian newspapers – Gazzetta dello Sport and Corriere de la Sera – began thinking of organising a major cycling event that could match Henri Desgrange’s Tour de France.

The Gazzetta dello Sport was faster: they announced the very first Tour of Italy, departing May 13, 1909 from Milan. The Corriere de la Sera – with Italian elegance – admitted to be beaten and offered an extra 3.000 lires to the first Giro winner. It took the Giro about 30 years to become an internationally recognised competition, essentially reserved for Italians in the beginning. The battle with Desgrange’s Tour de France has been tough … and has been lost.

Major Italian champions as Girardengo and Binda dominated the Giro, but never played any major role in their scarce participation’s in the Tour. It was the first non-Italian victory of Hugo Koblet in 1950 that gave the Giro world-wide interest and put it on the “Grand Tour Map”. If you look at its victory list, you will notice that all record Tour winners (Anquetil, Merckx, Hinault, Indurain) won at least one Giro. The Giro used to be the second major race of the season. The rider who will win the Giro 2003 will surely have deserved it, but will he match the history books when we talk about Koblet, Gaul, Anquetil, Gimondi, Merckx and Indurain ?

Let’s take a look at the history of the legendary Giro!

1909: The First Giro
On May 13, one hundred and twenty seven riders took off from Via Monza in Milan for a Tour of Italy that would cover 2,450 kilometres in 8 stages. The first stage sees the 2 main favourites disappear: Giovanni Gerbi loses 3 hours repairing his bike, and Lucien Petit-Breton – the 1907 and 1908 Tour winner. Finally victory goes to Luigi Ganna, beating Carlo Galetti (who will win in 1910 and 1911) and Giovanni Rossignoli. Born in 1883, Luigi Ganna finished 5th in the 1908 Tour de France, and won Milan-San Remo in the year he won his first and only Giro.

By winning the initial stage from Milan to Mantua, Learco Guerra earned the honour to be the first to wear the newly installed symbol of being the Giro leader: the Maglia Rosa. This 19th Giro d’Italia will be won by Francesco Camusso, second Luigi Giacobbe, third Luigi Marchisio (the 1930 winner). Guerra will win the Giro again in 1934.

In 1933, the King of the Mountain competition was introduced. First winner was the great Alfredo Binda, who also won the overall classification that year. It was his last of a record 5 Giro victories, knowing that he could have won more. After winning the 1925, 1927, 1928 and 1929 Giro’s, the organisers thought that Binda’s overwhelming superiority would bore the public, and therefore paid him the victory price money … to stay home.

The Points competition will only be introduced in 1966. 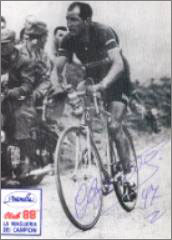 After winning his very first Giro stage in 1935, Gino Bartali starts in an all Italian 1936 Giro. Due to the international isolation of the fascist Mussolini government, no foreign riders participate. After 6 stages – all finishing by mass sprints – 8 riders are in first place. Leading in the points classification, Aldo Bini is awarded the Pink Jersey. The next day, Giuseppe Olmo wins another peloton sprint, and joins Bini in both time and points classifications. Exceptional fact: 2 Pink Jerseys take the start of the next stage ! Finally, Gino Bartali will take the Pink and keep it till Milan, beating Olmo and Canavesi – and thus putting an end to the Binda-Guerra-Camusso era. 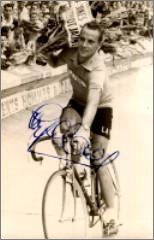 Favourites that year: the inevitable duo Coppi-Bartali and also Jean Robic, the 1947 Tour winner. But Coppi falls during the 9th stage and breaks a hip. Robic also falls in the 12th and abandons with an eye wound. The road now seems paved for another Bartali victory. But it is not “Gino the Pious”, but a young Swiss that dominates the mountain stages.
At 25 years of age, Hugo Koblet was more known as being a good track rider rather than a road racer. He never weakens and finally wins the Giro, more than 5 minutes ahead of Bartali. Koblet will win the Tour de France in 1951, but never managed to build up a career matching his capacities and elegance. Health problems will keep him from winning more major races. “Beautiful Hugo” will die young: on November 2nd 1964, he drives his white Alfa Romeo into a tree near Zьrich. No traces of braking have been found …

1956: The Incredible Victory of CHARLY GAUL 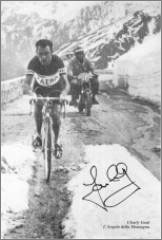 At the end of the 16th stage, all seems lost for Luxemburg’s Charly Gaul. Despite winning 2 stages, he is only 24th and more than 15 minutes behind on leader Fornara. Then comes this memorable 8th of June, the last Dolomite stage from Merano to Trente. It rains and it is very, very cold when Charly Gaul attacks in the climb in the Rolle, where he reaches the top with a 2 minutes lead. But in the dangerous downhill part, his brakes do not function, and he is forced to use his feet to reduce speed. He is passed by most other favourites, and loses more than 6 minutes on them. But then rain and cold affect rider after rider: Padovan, Monti, Defillipis, Fornara, … they all bend and then break. Rain has now changed into snow, but nothing can stop Charly Gaul, who catches rider after rider, and finally wins this historic stage more than 8 minutes ahead of Fantini. He will win the Giro 2 days later. 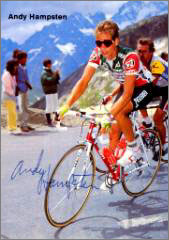 Polar conditions on June 5th : snow and ice, and above all … a terrifying cold. The 7-Eleven team took all precautions to face these conditions: all riders covered their arms and legs with vaseline, the team cars were filled up with hot drinks and dry clothes. Everyone was freezing, and so was Andy Hampsten. But he suffered less than most of the others. The damage after this “dantesque” stage to Bormio was huge. Breukink won, but most major favourites were KO’ed: Saronni and Visentini lost more than 30 minutes, Van de Velde more than 45 … Two days later – in nearly the same awful conditions – Hampsten and Breukink take off again, forcing the whole peloton into a violent pursuit of more than 100 kilometres on the road to Innsbruck. Andy Hampsten will then win the time trial on de Col de Vetriolo, and therewith assure the first American victory in the Giro.
1° Andy Hampsten 2° Erik Breukink at 1’43” 3° Urs Zimmerman at 2’45”