On a stage that could have been more decisive, most of the top men were not doing much, until the last climb, conserving their energy for tomorrow’s time trial, except Colombia’s Freddy Gonzalez.

Freddy Gonzalez of Colombia, the mountans leader, to-day threw down the gauntlet and went off on his own to collect some more points. He took the first climb, behind him was a group of 6 and between them and the bunch was Pavel Tonkov of CCC-Polsat. 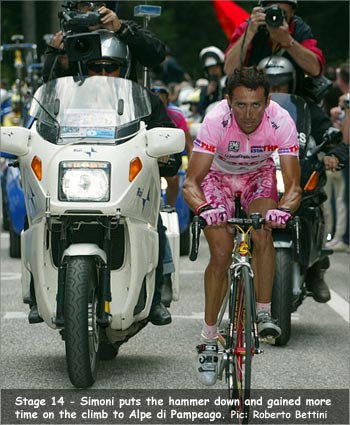 Over the second climb of the day, Passo di Valles, on this the 14th. stage to Alpi Di Pampeago, 162 kilometres with three hard climbs and a summit finish, Freddy was first about a minute infront of the 6 and 5 minutes on the bunch.

The third climb, Passo di S. Peligrino, Freddy was first again, 1 minute 26 seconds infront of th 6 who were: Gobbi, Lanfranchi, Zaballa, Belli, Nocentini and Lunghi. Tonkov was still in between and the bunch were at 4 minutes 34 seconds.

Before the start of the summit finish, freddy was caught, with a nice bag of mountain points. The bunch were now doing a bit of work, mostly Saeco for Simoni in pink. Tonkov was caught and nearly dropped and the chase was on, the gap now to the lead 7 was only 2 minutes 45 seconds.

The escapees started the finishing climb to Alpe de Pampeago with 1 minute 47 seconds in hand, which was not going to be enough. Zaballa of Kelme put the hammer down and split the group to pieces, they were now in ones and twos. Simoni was leading the bunch, all the other team leaders were there, Rumsas, Casagrande, Garzelli, Pantani and Popovych.

Simoni attacked, Popovych got to him and they had 100 metres lead on the others and were catching the front runners. At 5 kilometres to the top, Simoni dropped Popovych and there was only Belli infront of him.

Simoni passed Belli with about 3 kilometres to go with some 15% slopes to come. Garzelli got up to Popovych with Rumsas and Pйrez (Panaria), Pantani was now not in contention, Popovych was the first, then Pйrez, second to get dropped, it was now down to Garzelli as Rumsas could’nt work with him.

Simoni took the stage and 35 seconds out of Garzelli, who out-sprinted Rumsas, the others staggerd in as best they could.

Tomorrow’s time trial, 42.5 kilometres from Merano to Bolzano, should’nt change things too much, unless some-one has tried too much to-day?