To-day, the first of the big 3 Tours starts with a nice flat stage for “Super Mario” to put him-self in the history books, to equal the 41 stage wins of Alfredo Binda. Did he do it?

Nice warm day on the South East heel of Italy, for stage one, a circuit of 201 kilometres round Lecce. Cipo, Pantani etc. all looked very keen, Robbie McEwan watching Cipo close-up all day. 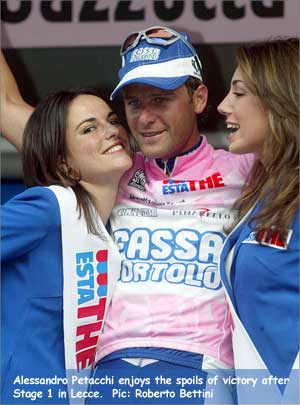 An easy start along the coast road, 3 hours passed like a club run, round beaches and small harbours, lots of “totty” to look at but not much race excitement!

Julian Winn (Fakta) went to the front for a look, followed by Scott Sunderland (also Fakta), a fairly fast pace now with 60 kilometres to the finish. The sprinters were on the move now as there was a special sprint with a time bonus soon. Elio Aggiano of Formaggi tried his luck, but was pulled back by Lampre.

The Intergiro sprint was taken by Andrus Naudusz of CCC-Polsat, followed by a group of 8 riders who got some fresh air for a few kilometres, until Domina Vacanze brought them back.

Frank Hoj (Fakta) and Cristiano Frattini (Tenax) looked strong, as they were still away with 40 kilometres to go they had 27 seconds. 10 kilometres later they had 41 seconds, the bunch being pulled by Domo/Lotto and Domina Vacanze for McEwan and Cipollini, every-one else is just rolling along.

25 seconds was all they had at 20 kilometres out, Lampre and FdeJ had started to help in the chase. On a long straight road they had them in sight, Fassa Bortolo and Alexa also moved forward. 5 hours had passed at an average speed of 37.7 kph, not too fast, but it was getting warmer as the two got caught in the last 12 kilometres, Cipo’s team on the front.

5 kilometres to go, Lotto-Domo leading the string, but no team in control, CCC Polsat and Sidermec also showing. The Domina Vacanze team took over at 3 kilometres, the well trained squad leading him out, on his wheel was Petacchi (Fassa Bortolo) and behind him McEwan (Lotto/Domo) and Graeme Brown (Panaria) were head butting. The last K, 3 left to lead out Mario, then 2, then only Lombardi for the last push. Mario came off the wheel, but Petacchi was too fast and got him on the line.

RIDER COMMENTS (reported by Michele Tomasi)
Petacchi: “I still cannot believe that I won the first stage. At the last 1500 metres I was sure to not be going to win it, as I was in a very bad position. But thankfully to
Velo and Trenti, especially to Velo, I got the chance to catch the Mario’s rear wheel. I was thinking to surprise him by spurting before him but then I waited. And when Lombardi left him alone I was waiting for his change of speed but…it didn’t happen. And so I won! I’m really glad of this victory, stage and jersey. This is for all the people who believed in me”.

Cipollini: “What didn’t work? Me. I haven’t been able to do a good sprint, perhaps because of the heat. But I’m already waiting to start tomorrow and try to catch my first victory at Giro for this year. Petacchi has all my respect after Zolder, and congratulations to him for the victory”.

Tomorrow’s stage is between Copertiro and Matera, 177 kilometres, mostly flat with the 3rd. cat climb of the Alto de Montescaglioso at 156 kilometres. Maybe tomorrow Cipo?