The Saeco team blasted things apart to-day on the 10th. stage from Montecatini to Faenza (213 kilometres). Gilberto Simoni was third on the stage, he had 25 seconds on Garzelli, plus 8 seconds bonus put him in pink by 2 valuable seconds. 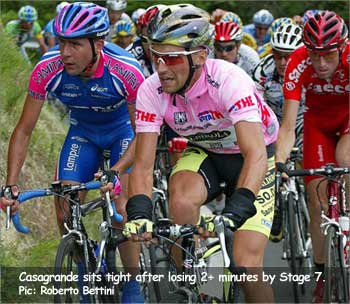 To-day was never going to be a day for the sprinter, or for the mountainmen, it was a day for a hardman and it was that Team Fakta who sent a man up the road again, Kurt-Asle Arvesen was that hardman.

There was a big group off the front that never got more than two and a half minutes.

The action came with 40 kilometres to the line, Gilberto Simoni and Leonardo Bertagnolli (Saeco), Kurt-Asle Arvesen (Fakta) and Paolo Tiralongo (Panaria) were away and going flat out for the gap. At the top of the last climb they had 36 seconds, Simoni waited for Arvesen and Bertagnolli, as they were the strongmen of the group.

Behind Garzelli (Vini Caldirola) in the pink jersey was on his own as his team were worn out with early chase. Pantani (Mercatone) had been droped, but managed to get back up to the chase group.

5 kilometres to the finish and they could see them 17 seconds infront, Casagrande (Lampre) and Tonkov (CCC-Polsat) did some work, but they couldn’t get them back. On the last kilometre Arvesen jumped, it was too early, Simoni got back to him, but Arvesen was not finished, he put in another attack and took a fine win.