Giro Stage 12: Simoni Breaks Them All

The riders taking part of the 86th edition of the Giro d’Italia were greeted this morning by a beautiful blue sky, a far cry from the dismal weather that dominated yesterday’s stage into San Donna di Piave that saw the current World Champion Mario Cipollini slide out in a wet corner in the last 200 meters of the race. Cipollini, who is now the outright record holder for stage wins in the Giro, decided not to start this morning because of his injuries suffered in the fall. Kelme rider Isaac Galvez, who caused yesterday’s crash, also decided to abandon overnight. 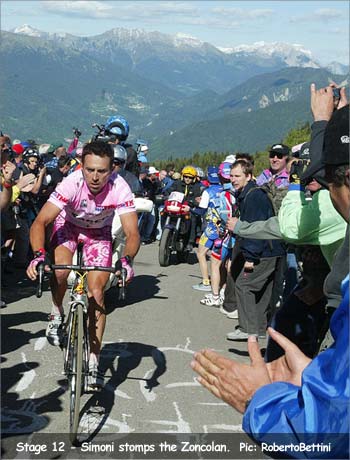 Today’s 12th stage took the riders 185 kilometers from San Donna di Piave to the summit of the Monte Zoncolan, a climb that has never before been used in a major bike race. Despite being unknown this giant has a feared reputation, being 13.3 kilometers long and climbing to 5,676 feet. Many of the top contenders for this years race have visited the Zoncolan during the winter months and have claimed that near the summit it steepens to an incredible pitch of 27%.

Saeco’s Gilberto Simono started this morning with a 2” advantage over Stefano Garzelli of the Vini Caldirola-Sidermec squad. Both previous winners of the Giro, they were expected to continue their GC battle on the slopes of today’s mountain top finish and they didn’t disappoint.

Most of stage 12 was covered with one man in the lead, Fassa Bortolo’s Marzio Bruseghin. The Italian would carry his solo lead over the first major climb of the day, the Passa Feusse, leading a 10 man chase group by just over 2 minutes. The Colombian Fredy Gonzalez would lead the chase group over the climb extending his lead in the mountains competition.

The real fireworks were reserved for the mighty Zoncolan, Lampre’s Wladimiro Belli launched himself off the front of the chase group and quickly ate Bruseghin’s advantage. Behind in the pink jersey group Francesco Casagrande and Raimondus Rumsas were being given an armchair ride thanks to their teammates acceleration. At the head of affairs was Simoni, Garzelli, Casagrande, and the suprising Marco Pantani.

With 5km to go Simoni launched his first attack, taking Casagrande, Landbouwkrediet’s Yaraslov Popyvich, Garzelli, and Pantani with him. One by one Simoni rode the others off his wheel and soloed to victory. Behind Garzelli and the re-born Marco Pantani lead the chase, but there was no stopping ‘Gibi’ who still has a fire in his legs after last year’s disqualification. He would finish 34” in front of Garzelli, 39” on Casagrande, and 42” in front of the 23 year-old Ukranian phenom Popyvich. Pantani would round out the top 5 by losing only 50”.

In the GC, Simoni now leads Garzelli by 44” and Alessio’s Andrea Noe retained his third place overall by making a great comeback on the slopes of the Zoncolan to finish in the top 10.

“Perdi” Wins Stage 3 Of The Vuelta A Castilla Y Leуn