Gilberto Simoni has taken a decisive grip on the Maglia Rosa, as his rivals crashed, faltered and suffered on the mountains blocking the way to Chianale this afternoon. Barring inconceivable disasters, Simoni will finish in pink in Milan. 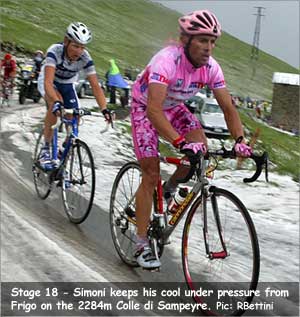 It wasn’t only the mountains that caused chaos, though. The weather turned nasty, shocking the tired systems of the peloton by unleashing snow, ice and rain on the riders. In particular, the penultimate slog up the Colle di Sampeyre caused suffering as Simoni took the opportunity to reel in the remainder of an early 13-strong breakaway while the snow came down.

Dragging Dario Frigo (Fassa Bortolo) and Gerolsteiner’s Georg Totschnig in his wake, the Italian flew clear of rival Stefano Garzelli, while Yaroslav Popovych dug in to come back then attack on the tricky descent. 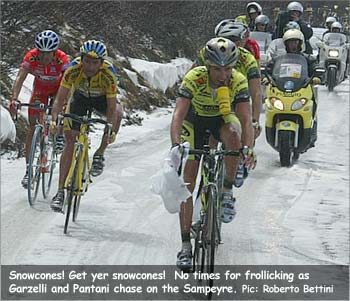