For the first time in the 86th edition of the Giro d’Italia a break attempt (excluding the mountain stages) succeeded. The decimated peloton on today’s 20th stage was lacking any one team strong enough to control the race and the result was a continuos flurry of attacks and break attempts. In the end it was Giovanni Lombardi, Cipo’s leadout man, taking his customary opportunistic stage win beating out Eddy Mazzolini (Vini Caldirolo) and Giuliano Figueras (Panaria). 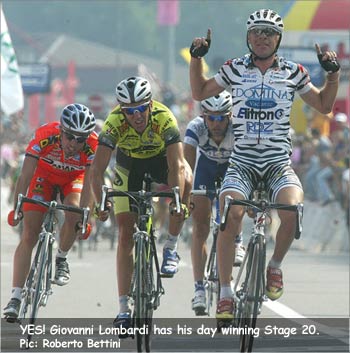 The day started banally enough with race leader Simoni’s Saeco squad controlling things at the head of the race for the first 50 km. From then on, however, it was a no holds barred battle to the finish line. The first to mix the mess up was the Domina Vacanza duo of Gabriele Colombo and Lombardi. Eventually the dust settled and 27 riders found themselves with enough space to make a go of it.

Among the attackers was the re-born (and re-shaped) Marco Pantani who made the split with three Mercatone Uno teammates (Manzoni, Gasperoni, and Codol). Because this break was over ј of the entire peloton it was pretty much guaranteed to succeed with only Jan Svorada’s Lampre team trying to pull it back together. Saeco seemed content to just cruise to the finish.

The group was too big for Marco Velo (Fassa Bortolo) who launched an attack with 28 km to go. The crafty and experienced pro Lombardi saw the Velo train leaving station (Velo has been twice the Italian national TT champion) and flew of the front of the lead group. The only riders able to match the duo were Mazzolini and Figueras. As soon as they caught Lombardi and Velo, Garzelli’s teammate Mazzolini attacked to try and make a solo bid for it. Just like his stage win last year, Lombardi did all of the work to close down the attack and then easily took the sprint.

Simoni followed in 1’42” behind the zebra-clad sprinter. With only tommorow’s 33km time trial in Milan, all he needs to do now is finish the stage and the Giro will be his. The real race is for the final two positions on the podium. Garzelli leads the 23 year-old phenom Popovych by a mere 2 seconds making tomorrow’s test the deciding factor for both riders.