Mario Cipollini has agonisingly failed to tie Alfredo Binda’s Giro stage wins record, edged in a desperately close finish by Maglia Rosa Alessandro Petacchi. Not even the proximity of Mount Etna could inspire the necessary sprinting eruption from the World champion. 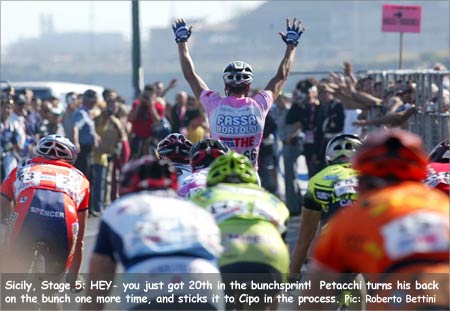 The margin at the line was a matter of centimetres, but Cipo’ will be fuming that his team ‘botched’ the finish, with Petacchi taking the best advantage of Giovanni Lombardi’s lead-out once the Domina Vacanze crew had done their work in the closing kilometres.

Cipo’ found himself behind Petacchi as the line approached, but just didn’t have the speed or sharpness to snare the 41st Giro stage win of his career. Maybe his lack of racing between Ghent-Wevelgem and the Giro is going to haunt him in his quest to make the record books alongside, or ahead of, Binda.

However, he’ll be encouraged by the fact that today, at least, he survived the 25km long Portella Mandrazzi climb to have a shot in the sprint for the line. We saw another impressive performance from fdjeux.com’s ex-MTBer Bernard Eisel who came in 3rd. Marco Pantani again stayed up front and out of trouble rolling in 15th.

At the top of the GC, Petacchi’s win gave him an extra 20-second time bonus, meaning he is now 49 seconds clear of Stefano Garzelli. He’s now looking good to hold the Maglia Rosa until the climb of the Terminillo on Saturday.

As the average speed suggests, nobody can go ‘piano’ like the riders in the Giro, and they just noodled along for the first 100 km, and not even the climb raised much activity. However, over the top Fredy Gonzalez (Colombia Selle Italia) and Kelme’s Ignacio Gutierrez decided to try their luck.

They gained 3 minutes or so, but, even with Tenax’s Daniele Pietropolli for company, they were hauled back in time for a far from sedate charge down to the finish. The speeds looked incredible as the sprinters’ teams successfully repelled any getaway attempts. And the fact that they’d only managed a 35.8 kmh average speed shows how slowly they were riding for the first 4 hours or so!!

It was a spectacular sprint finish played out at the front, as a couple of crashes near the back held up a number of riders. Those with bumps and bruises will be able to recover a little tomorrow as the riders have a ‘rest day’ – which involves the hassle of an air transfer from Sicily back to the Italian mainland, where the Giro resumes in Maddaloni on Friday.