For any mortals who believed his sprinting prowess had deserted him, cycling God Mario Cipollini laid down the irrefutable truth today in glorious style – he’s still the best. And as of today, no one in the history of the Giro d’ Italia has ever won more stages. 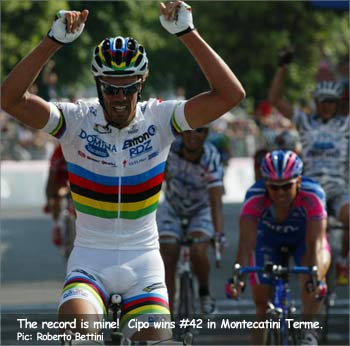 And it’s going to be a hell of a long time before anyone else even comes close to matching Cipo’s 42 career stage wins. ‘Re Leone’ stormed into the record books, overtaking Alfredo Binda’s previous Giro stage wins record, scoring his landmark victory in Montecatini Terme this afternoon.

It has taken a while for the 36-year-old motor to warm up this year, but Cipo’ shrugged off the disappointments of losing to Alessandro Petacchi and Robbie McEwen last week, as well as today’s Tour de France snub, by holding off the fast-charging McEwen in the dash for the line after a flat 160km today.

After proving he still had it in him by equalling the record yesterday, Cipollini once again finished off the fine work of his Domina Vacanze squad, negotiating a tight bend 400 metres from the line in 3rd slot, before hurtling off Giovanni Lombardi’s wheel.

McEwen tried desperately to come past, but the Tuscan was too strong, and sailed into the record books on home soil. Petacchi came home 3rd.

The bunch went to work straight away this afternoon, with none of last weeks dawdling along. 82 kms disappeared under the wheels in the first 2 hours of racing.

The only significant move of the day saw 6 riders escape a larger breakaway, mid-way through the stage. For the record, and for the sponsors, they were: Brozyna (CCC-Polsat), Bruseghin (Fassa Bortolo), Casar (FDJ.com), Faresin (Gerolsteiner), Miholievic (Alessio) and Sacchi (Saeco).

They gained a maximum lead just shy of 2 minutes, but the course profile meant they had no hope of holding out. It came down to a big bunch charge, and Domina Vacanze, despite losing Ongarato in a late pile-up, were in total control, setting Cipo’ up perfectly.

It’s impossible to compare Cipo’ with such a legend as Binda – cycling was a very different game 70 years ago, and Binda was one of the great Italian champions, winning the Giro overall 5 times between 1925 and 1933 – something Cipo’ knew he was never capable of. But to have notched up so many stage wins is a sign of great talent and incredible consistency.

And who would bet against the new record being put out of sight between now and June 1st, as Mario vents his frustration against Jean-Marie Leblanc and the Tour de France organisers?

TDF Selection: Another Load of Crepe?