Stage 17 down, 4 to go. Petacchi has done what no one expected, but claims he’s still in pain from the crash, Lomabrdi makes excuses, and Simoni has a secret. Read the comments… 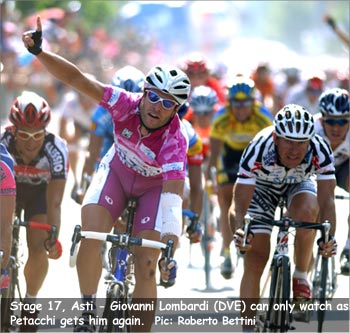 Petacchi: “I must stop saying that I’m suffering a lot, or someone will start to tease me, because it’s 3 days that I’m saying it, but I continue to win. Beside the jokes, I’m
really having a lot of pain, especially on my left side. If someone touches me there, for example during a sprint, I will really feel a lot of pain. In these days, I’m running as Cipollini used to; I mean, everybody tries to catch my wheel, and this is good for me, because I can think just to prepare for the sprint. Today I followed Velo, because I know that he is in a great condition now, and even if he started his sprint too soon, at 500 metres, he lasted until the last 200 metres. Then, his speed was going down and so I sprinted to not risk to lose the race. Now I don’t wanna talk about the Tour. Of course I’d like to take part at it, but for example, now Zabel
is at home, preparing it, and Cipollini too. I’m racing in here, and so I don’t know how much energy I will have at Tour. Anyway I will decide at the end of Giro”.

Svorada: “In the last 2-3 days my condition is growing, but today I couldn’t breath very well, perhaps I’m having a little cold. For example there was a little hill, and I risked to not be able to follow the group. Anyway at the sprint I’ve been lucky, because a FDJ’s rider carried me until the last metres, in a very good position, but I
didn’t have enough good legs to beat Petacchi”.

Lombardi: “I was in a good position, but then came Gasparre and he made a gap. So I did a first sprint for close that hole on Petacchi and when he spurted again I didn’t have enough energy to follow him. Anyway to beat Petacchi now, there could be only a Mario in a good condition”.

Simoni: “My mind was already thinking at tomorrow. It will be an hard stage, and I don’t care about what the others will do. I’ve a plan in my mind, and I won’t tell it to
anybody”.