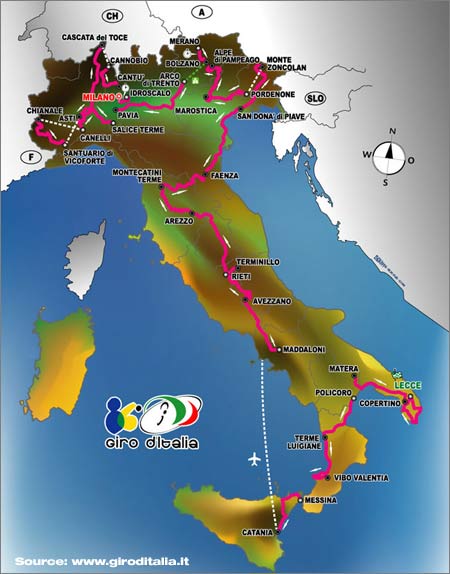 One of the happiest men at the presentation for the 2003 Giro d’ Italia race route in Milan on Saturday was sprinter supreme Mario Cipollini, who will take his world champion’s rainbow jersey to a course where at least 7 of the 21 stages could end in a sprint finish.

Needing only 2 wins to top Alfredo Binda’s record of 41 stage victories in the Giro, Cipo could be in the pink leader‚s jersey after the very first day on the race. In a break with tradition, the organisers (RCS organisation and La Gazzetta dello Sport) have dispensed with a prologue time-trial and opted to start with a 192km road stage from Lecce in the far south of the Italian
peninsula. The next 6 stages are all sprint finish possibilities, even if stage 3 is on a slight uphill. Despite these chances for sprinters, there’s
something for all types of rider in a spectacularly open race profile for next year.

Like recent Vueltas d’ Espana, the event concludes with a time-trial, but specialists hoping to be in a position to take advantage of their skills against the clock will note that they’ll have to climb like never before to have a shot at victory, because the first of 2 TTs in the race doesn’t
appear until stage 15. By then the riders will have faced some hellish climbing stages.

There are 5 mountaintop finishes next year, with the most intriguing coming on Monte Zolcolan, a climb making it’s first Giro appearance. At over 13km
long, and lying in the region of Friuli, in Italy’s far north-east, it has sections of 20-22% gradient over the final 5kms or so – many observers rate it as harder than the Mortirolo! A possible rival to the Vuelta’s notorious Angliru stage, then!

The other mountaintop finishes are on stage 7 to Monte Terminillo; stage 14 to Alpe di Pampeago in the Dolomites; stage 18 in the Italian Alps to Ponte
Chianale; and finally stage 19 to Cascate del Toce. The ‘Prima Coppi’ – the prize awarded to the first rider over the highest point in the Giro – will be won on the Colle di Esischie on stage 18, which climbs to a height of
2366m.

There will be 2 rest days, after stages 5 and 16, giving the riders a chance to rest up for the first serious mountain tests, and then the final, 5-day push to Milan. They‚ll need the rest – the route has around 17,000m of
climbing – but the fact that there are only 82kms of time trials, and with the average stage length coming out around 165km per day, in less than 3,500km of racing should ensure that their systems will be able to cope.
However, the earlier than usual start to the Giro – it heads out of Lecce on May 10th – means the weather could be a factor. The high mountain passes could be pretty unpredictable if snow or heavy rain hit.

Unlike the ‘Euro-Giro’ of 2002, next year’s edition doesn’t stray outside Italian territory, so home fans will have a lot to shout about, and foreign riders may be slightly less motivated than they were. The usual home
favourites, like defending champ Savoldelli, Simoni, Garzelli and perpetual challenger Casagrande will all fancy their chances, along with those foreigners who made a splash last time – Hamilton, Evans (Aitor Gonzalez, who broke through at last year’s Giro may concentrate on the Tour in 2003). Maybe we’ll even see a little action from Pantani?

Regardless, the man who pulls on the final maglia rosa of the 2003 Giro in front of the Piazza Duomo, home of Milan’s beautiful cathedral, will have won a challenging but open Giro.