Two days before the opening stage of the 99th Giro d’italia, the first pre-race press conferences took place at Race Headquarters in Apeldoorn’s Omnisport. Please find below a selection of the main declarations: 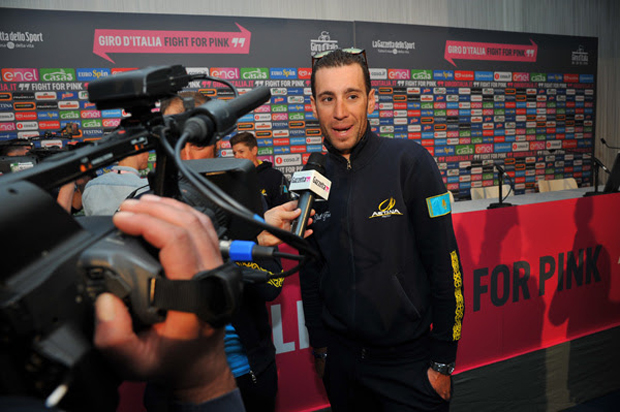 ASTANA PRO TEAM
Vincenzo Nibali: “I struggled a bit at the Giro del Trentino. My last race was Liège-Bastogne-Liège and I have recovered since. I’ve prepared for the Giro d’Italia as best I could. Looking back at the past two years, the most improved young rider has been Mikel Landa. He’s one of my main rivals for this Giro, and there are also good young riders in Tom Dumoulin and Esteban Chaves. There will undoubtedly be surprises along the race route too, so concentration will be key. The first big day will be the time trial in Chianti, with very fast downhill sections and changes of rhythm uphill. The stage to Arezzo includes some sections of dirt road and will be very hard too. The Chianti time trial could favour me over Landa, who is a rider we know very well. Time trialling has always been a weakness fo rhim, although he’s a great climber and he’ll be the man to beat in the mountains. He descends well, although he isn’t a real specialist. However, we can’t focus on him alone when there are riders like [Alejandro] Valverde and Dumoulin in the race.” 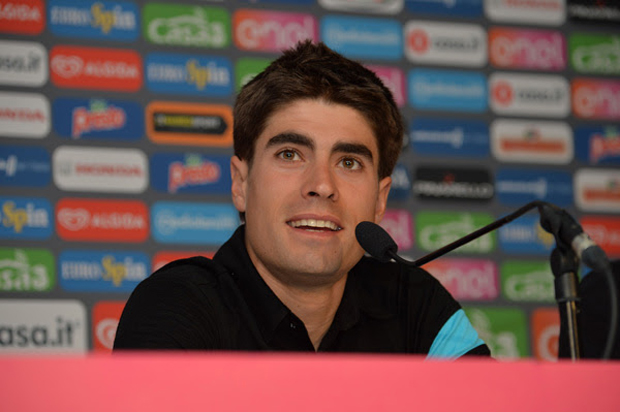 TEAM SKY
Mikel Landa: “I resumed racing only a little while ago so I don’t think I peaked too early at the Giro del Trentino. I believe I can still improve. It’s not a problem to have a sprinter in the team(Elia Viviani) because, if he wins, he can create a good feeling in the team, and it will keep us concentrated in the sprint stages, so I think it’ll play in my favour. It’s a great opportunity for me to lead Team Sky at the Giro d’Italia d’Italia, after a spell riding with Vincenzo Nibali at Astana. He’s very strong, uphill as much as downhill. He’s got real power and he’ll be hard to beat.” 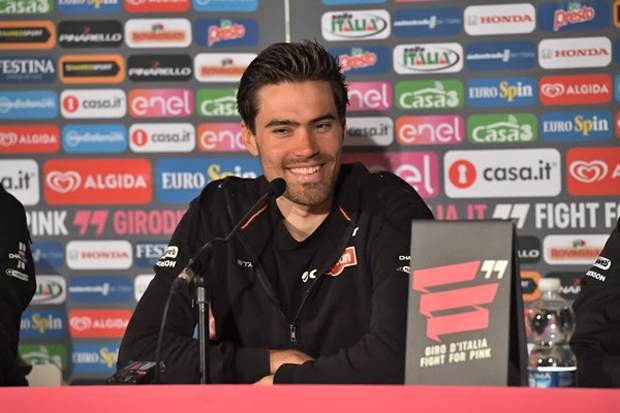 TEAM GIANT – ALPECIN
Tom Dumoulin: “The big start in the Netherlands, with the opening time trial, is one of the reasons I wanted to ride the Giro. I didn’t go to altitude for a pre-race training camp, which is necessary these days if you want to target the overall classification in a Grand Tour. The main goal of my season is the time trial at the Olympic Games in Rio, so at the Giro d’Italia I’ll be targeting the time trials on Day 1 and Day 9. The mountain time trial should suit me too. I think that I’m a bit more relaxed than I was last year when the Tour de France had its Dutch start in Utrecht. I’ve learnt from experience. On Friday I believe my biggest rivals will be Fabian Cancellara, Jos van Emden and Vassil Kiryienka. At Tirreno-Adriatico Cancellara won the final time trial in a time that I’ll probably never be able to match so if he’s in the same form now, he’ll be very hard to beat”. 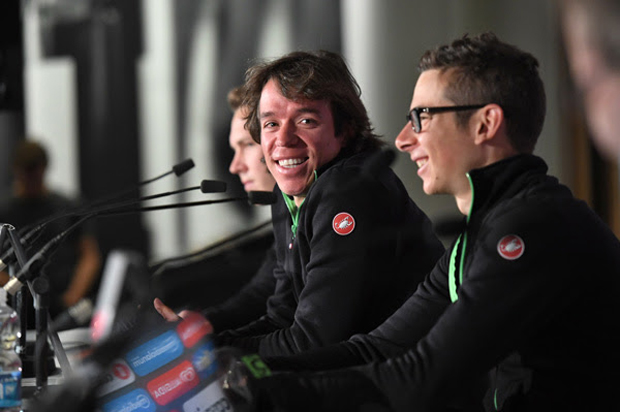 CANNONDALE PRO CYCLING TEAM
Rigoberto Uran: “I’ve been riding as a pro for ten years. I’ve kept great memories of my previous participations to the Giro. Like every year, I’m motivated and I’m here to win. I believe the decision will come in the third week in the mountains. We have a pretty young team in which I feel good and you’ll see, the revelation of the Giro will be Davide Formolo! We’re six Colombians racing [with Esteban Chaves, Carlos Betancur, Sebastian Henao, Darwin Atapuma and Daniel Martinez]. It’ll make a lot to talk about but it’s a pity there’s no more Colombian team participating and operating in Europe. We’ve lost that”. 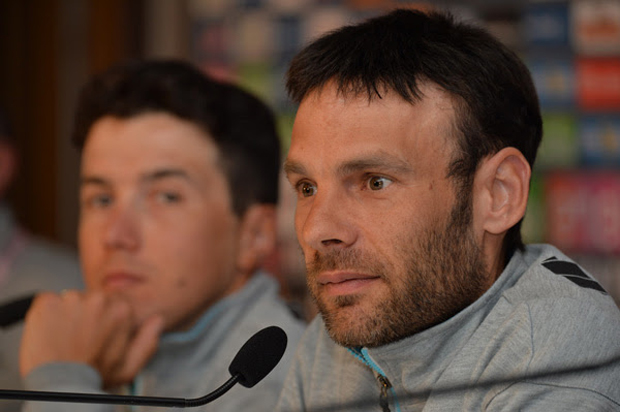 AG2R LA MONDIALE
Jean-Christophe Péraud: “The two key words for me here are pleasure and sporting goals. I’ve ridden the Vuelta and finished second in the Tour de France, and I wanted to discover the Giro d’Italia because I know cycling has a huge following in Italy. I had good sensations at the Giro del Trentino. I’m not here only to take part but also to perform. The team has two captains (the other is Domenico Pozzovivo). I’m aiming for a top 10 spot and if I can do better, I won’t hold back. Your last season of racing is different. There’s less tension and I want to profit from every moment”. 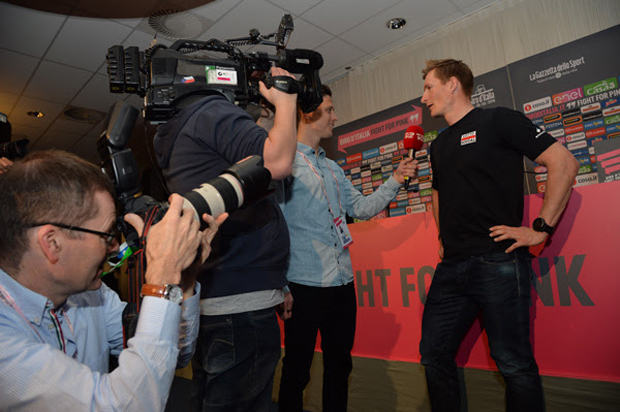 LOTTO SOUDAL
André Greipel: “I foresee six or seven opportunities for sprint finishes and I’ll take every chance I get to try and win a stage, as I have in every Giro I’ve taken part in. There are nine or ten top sprinters here, with a new generation coming through. Caleb Ewan has already won a stage at the Vuelta a España, and I got to know Jakub Mareczko at the Tour of Turkey last week. It’ll be a different story for him at the Giro but those two young sprinters have a bright future. I’ve had my worst Spring ever since I became a bike rider. Now my condition is OK. I won a stage in Turkey. Now I just need luck to stay off the ground”. 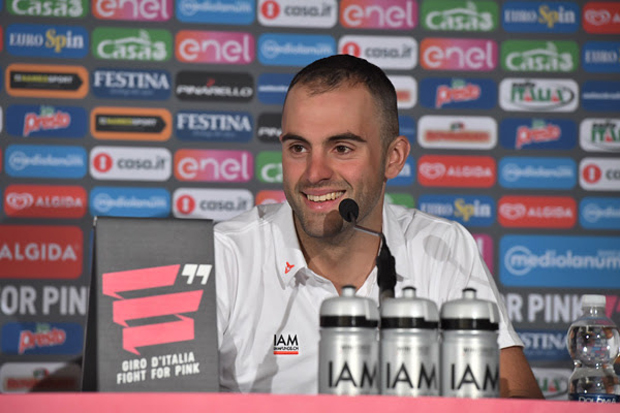 IAM CYCLING
Matteo Pelucchi: “Last year I collected a second place in a bunch sprint finish, after which I crashed and pulled out. This year’s Giro suits me more, starting with Saturday and Sunday’s stages. Marcel Kittel and André Greipel are potentially above us, Giacomo Nizzolo looks in good shape, and Elia Viviani will be good, even if he hasn’t raced much recently. Caleb Ewan and myself are the other favourites for the sprints. I see myself as a potential points classification winner in Turin but first I will try for stage victories”. 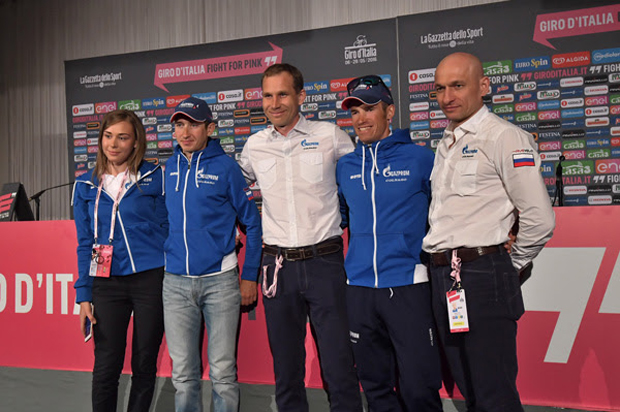 GAZPROM-COLNAGO
Sergey Firsanov: “I’ve been feeling good since the beginning of the season [winner of the Settimana Coppi&Bartali and Giro dell’Appennino]. The Giro d’Italia will be my first experience of riding a Grand Tour”. Team manager Renat Khamiloudine added: “We’ve brought a versatile team with a leader for GC [Firsanov] but also fast riders and time trialists who will go hunting for stage wins. We’ll fight every day. Our sponsor Gazprom is the world’s 17th biggest company, and we’ll do everything we can to ensure they stay in cycling for a long time”.