Stage 19 Race Report: After a couple of bad days, when Alberto Contador looked around and saw just how much Fabio Aru was suffering, the young Sardinian romped away in the last few kilometers to win a brutal stage. For Aru the day’s spoils, and up a place overall, but Alberto Contador was as comfortable as could be on a lightning-fast ride to Cervinia.

The Spaniard managed his resources well and could afford to not chase Aru when the youngster jumped away. With one more stage in the mountains tomorrow, Contador’s job is almost done – the maglia rosa is nearly won. 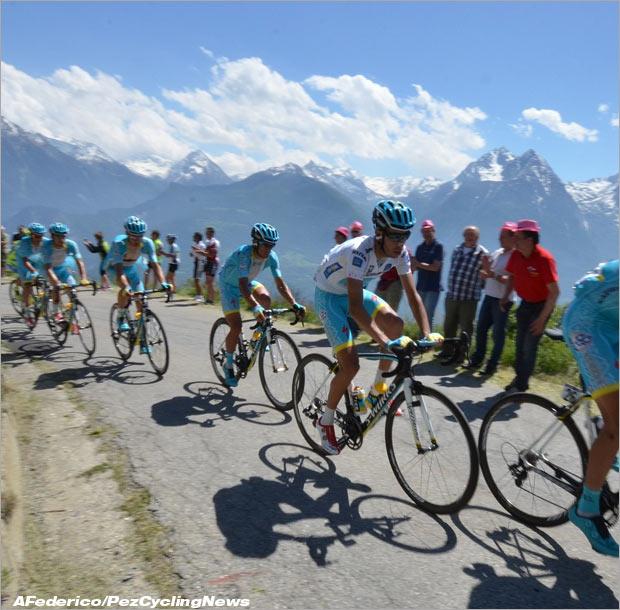 Surrounded by teammate’s on the Col de St. Barthélemy, Aru kept his powder dry until the final kms of the stage.

How it unfolded
We’re heading south out of Gravellona Toce, and then turning south-west towards the third-category Croce Serra. After that it’s northerly with a bruising triptych of first-category drags. All long, not fearsomely steep … but it’s a beast of a stage. 236 kilometers on the last Friday of the Giro. Be glad you’re watching at home, not racing it. 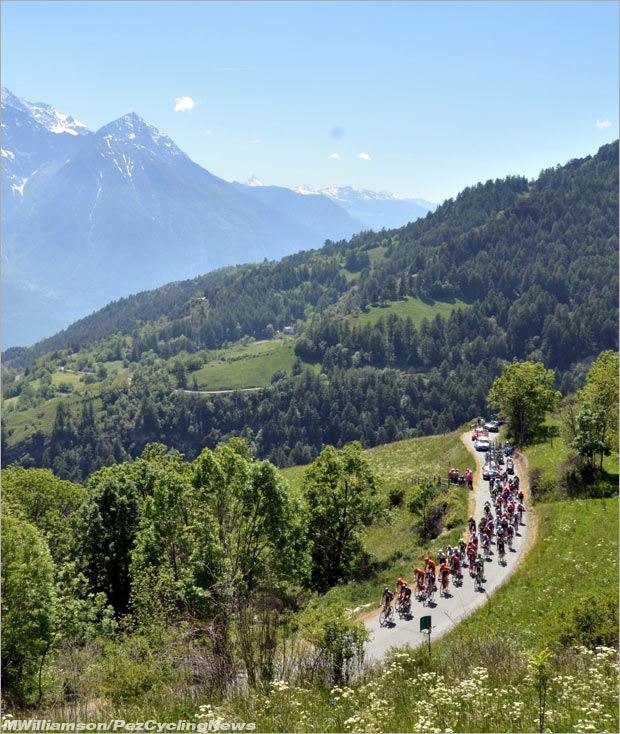 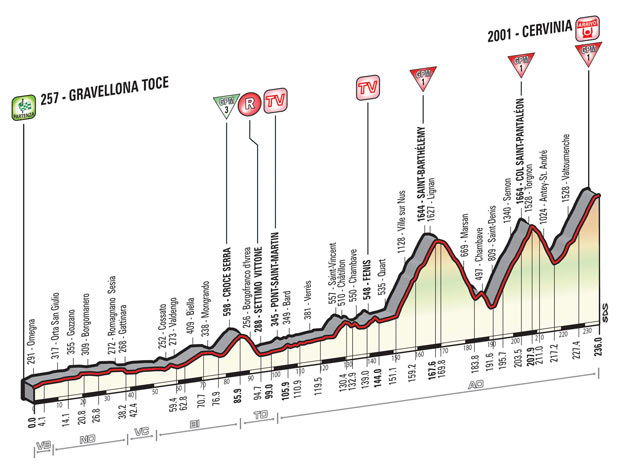 It’s an undulating road, gradually bumping upwards towards the Val d’Aosta for the final 90 miles or so. The climbs come like heavyweight uppercuts – a bit telegraphed, but packing serious weight. First up is the Col de St. Barthélemy (20km at 5.6%), followed by the Col de St. Pantaléon (16.5km at 7.2%) and the Cervinia to finish (19km at 5%).

A bit like recent stages, it starts off very fast, discouraging breaks, but eventually one does stick. It takes a long time to claw out a sizeable advantage – and the reason is that the escape has some good riders. Not general classification threats, but Androni Giocattoli have missed out and are chasing. Away are the Ag2r duo Carlos Betancour and Matteo Montaguti, Vasil Kiriyenka (Sky), Lampre-Merida’s Diego Ulissi, Movistar’s Gio Visconti, Marek Rutkiewicz from CCC, Esteban Chaves from Orica-GreenEdge, Katusha’s Pavel Kotchetkov and LottoNL-Jumbo’s Nick Van der Lijke. 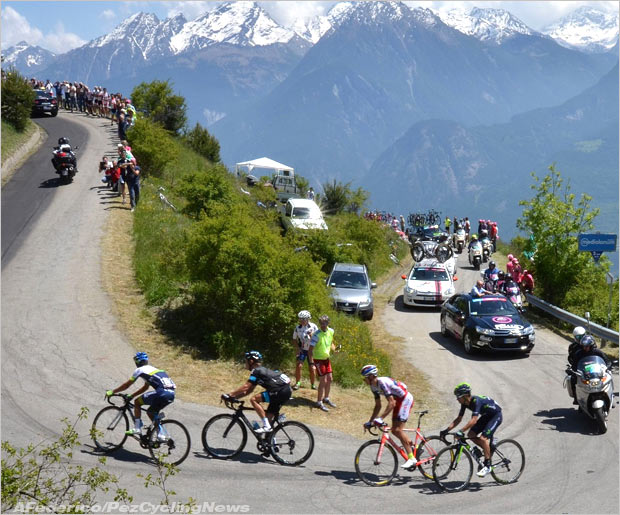 The break swings upwards on the Col de Saint Barthélemy.

The Dutchman’s job is to beat Betancour to any mountain points on offer, but the Colombian is too good on the first climb, the Croce Serra. Over the top of that one, the gap is pretty much four minutes, but Astana suddenly appear out of the ether to set the pace in the field. Maybe Aru and Landa have been given a rocket up the behind after yesterday’s pasting from Contador?

Astana continue to barrel along, and they reduce the gap to under 3’30” at the foot of the Saint Barthélemy. The escape is splitting ahead with Chaves and Visconti going clear. Kiriyenka and Kochetkov get up to them, and Rutkiewicz is chasing desperately as they near to top, but Betancour is dropped and about to be swallowed by the peloton, as Jonah into the belly of the whale.

Visconti takes the points, and so begins the plunge down to face the Saint Pantaléon. Inside 40 kilometers to go, and Visconti has just under three minutes on the maglia rosa group. It’s seven Astanas on the front of it. Kochetkov and Kiriyenka are in between. After exactly five hours of racing, today’s average speed is a soul-scorching 39.9 kilometers per hour.

The Italian just keeps grinding along, looking at the road. He’s got 1’15” on Kochetkov now, and the peloton a minute further behind. It’s still an Astana-heavy group with Zeits, Kangert, Cataldo, LL Sanchez, Tiralongo, Landa and Aru, and a bunch of Movistars around Andrey Amador. Contador has just Mick Rogers and Ivan Basso with him.

Visconti takes the points, and Kochetkov hangs for second; Kruiswijk and Intxausti battle for the third spot – the Dutchman just went too long, and the Basque overhauled him.

Visconti flies the descent and sets off on the final haul to Cervinia, with still about two minutes in hand. To hang on is a huge ask, however. Only 10.7 kilometers remain when Astana thunder past Visconti, who surrenders with a wave to the camera, “A domani!” Tiralongo, teeth gritted, just keeps battering along and what remains of the peloton is one long line.

Kosta Siutsou (Sky) goes just inside 10 kilometers to race, and it provokes a reaction. Landa (Astana) comes across with Contador (Tinkoff-Saxo) and Ryder Hesjedal (Cannondale-Garmin). Fabio Aru (Astana) gets across with Uran (Etixx-QuickStep) and Kruiswijk (Team LottoNL-Jumbo).

Inside 9 clicks, Aru tries to go, but Hesjedal closes up … and grinds past, with no immediate reaction. His head goes down and he commits 100% to this bid for glory. Then Landa jabs, but Contador counters with Kruiswijk and Aru. 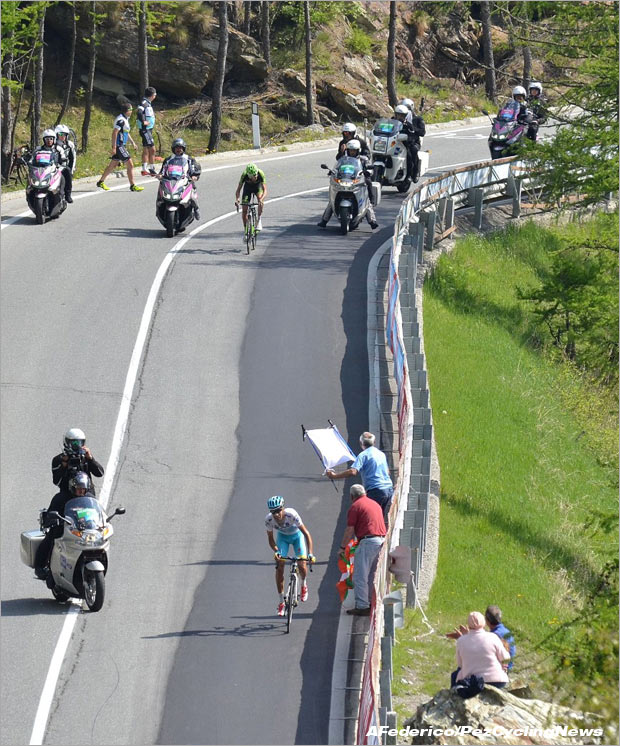 Aru catches Hesjedal on a pace too high to match.

Aru then goes again, and Contador just watches him go … with the Sardinian over six minutes down, the overall leader doesn’t need to react. Aru is closing on Hesjedal, but it’s painfully slow progress, and the Canadian 2012 Giro champion isn’t waiting for him.

Inside six to go, Aru catches Hesjedal, and then attacks. The Canadian tries to hang on, but has to let go. Aru is pushing his lead out towards 40 seconds; the chase, or what passes for it, is being driven by Kruiswijk and Leo Konig (Sky) with Landa and Contador sitting on. Andrey Amador (Movistar) is dropped and his hopes of the podium are being suffocated on the slopes.

Aru’s face is contorted in agony as he whips the pedals round, but Hesjedal ain’t giving up. The lanky Canadian can see him up the road. Contador continues to just sit at the back of his own little group as Rigoberto Uran romps past. 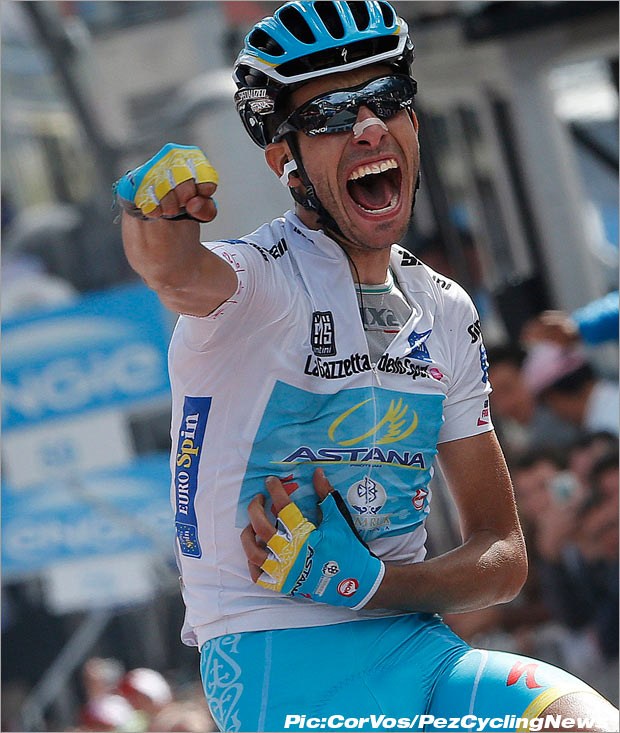 Finally a face with a different kind of grimace…

Under the red kite, Aru has the stage sewn up after almost six-and-a-half hours of effort, and a fourth stage win for Astana in this Giro. Hesjedal hangs on for second, coming in 27” behind (enough to move into 7th overall on gc). Aru has taken enough time to leapfrog his team-mate Landa for second in the overall … should be an interesting night on the team bus.

The riders trickle in, but for Contador it’s one more day ticked off. The beast remaining tomorrow is 200 kilometers to Sestriere, via the dirt road at the top of the Colle delle Finestre. Stay tuned to Pez – it should be a belter!