When looking back at the 2015 Giro d’Italia it’s hard to think of any negatives. Maybe there were a lot of crashes and definitely there were too many punctures on the last stage in Milan. The only ‘what if’ would be Landa being told to wait for Fabio Aru in a Froome/Wiggins sort of way. Ed and Martin are back home in Scotland and ‘happy’ to be at their day jobs, so we asked them for the ‘Top 12’ best things Giro.

Alastair, our Euro editor, has decided we should do a piece about our favourite ‘Giro things’ – he likes to squeeze those last drops. 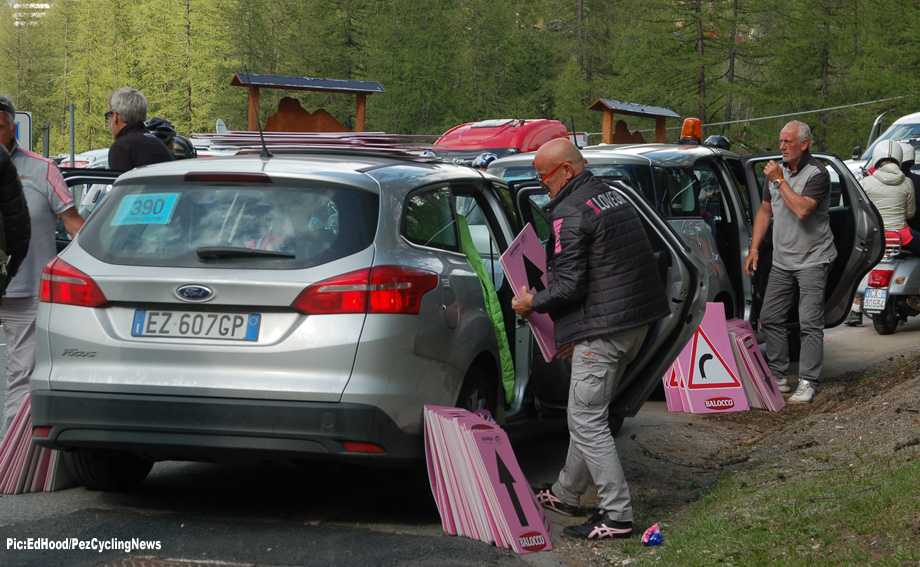 It takes a wee while to get back into the rhythm of being a journo on a Grand Tour.

Where everything lives in the car, every day run to a written schedule, finding a stampa to buy your Gazzetta, finding the start, not getting lost, finding the hotel, writing on the move, editing pictures, placing the pictures in the piece, pressing ‘send,’ finding a late night place to eat, doing the washing, bed, breakfast, REPEAT.

But it’s a rhythm which has its own beauty and simplicity and within a day you’ve found the groove and nothing, and I mean nothing, matters except, Il Giro. 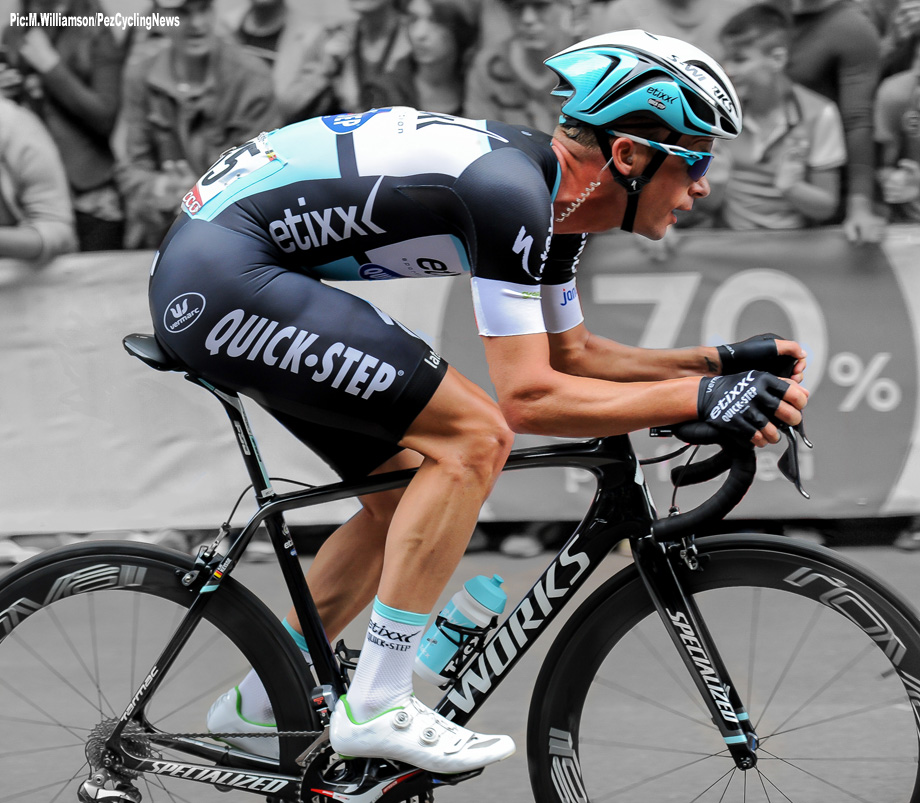 If you’re a man for betting on the dogs, then you’ll know that the greatest greyhound ever was a brindle male called, ‘Mick The Miller’ he had speed, stamina, class and charisma – he ended up a film star.

But it would be hard to imagine old Mick working as a mountain rescue dog?

On Saturday we watched Iljo Keisse battle his way up the brutal Finestre, the day before we watched as he did the same thing on cruel Cervinia.

On Sunday’s final stage into Milano, Iljo was let out of trap one.

Strong enough to hold off the peloton – albeit he had the right man with him – then fast and clever enough to take a beautiful win. 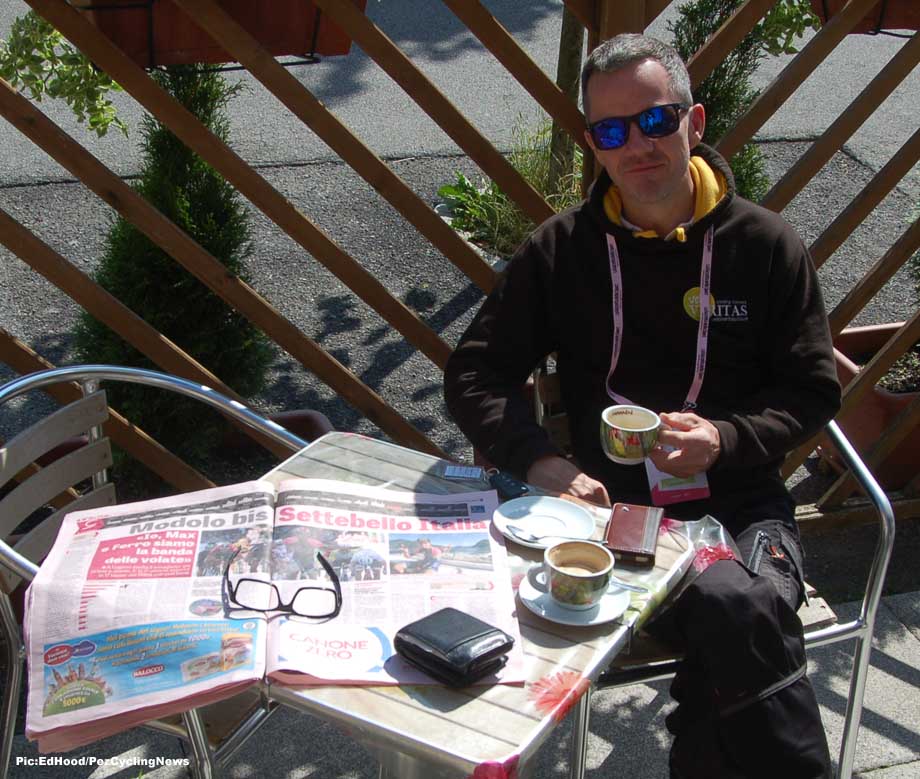 In Scotland you have to build a knowledge of where to get a good cup, and where, as John Wayne might say; ‘it ran offa some fella’s boots.’

No such worries in Italia.

Stop at the smallest, grottiest bar in the middle of nowhere and it’ll be smooth, at the right temperature and just perfect

And you don’t have to find a seat, you can lean on the counter, sip away and watch the world go by – life as it should be lived. 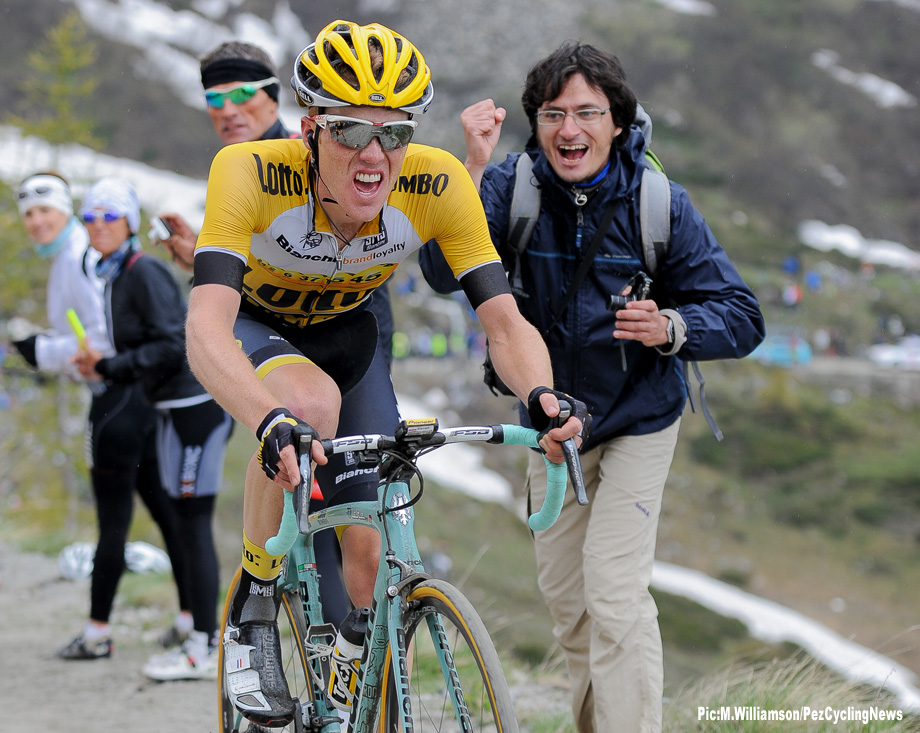 The time was when the men from the Flatlands were mountain kings; Kuiper, Winnen, Theunise, Rooks. . .

But not lately; Kruijswijk harped back to those days, aggressive, unafraid of ‘The Bigs’ and even riding himself into the blue jersey of Montagne leadership – only to be usurped by another battler, Visconti.

We liked his style and hope that he can continue his battle up the ladder – seventh in a Giro such as this could well be the harbinger of greater deeds. 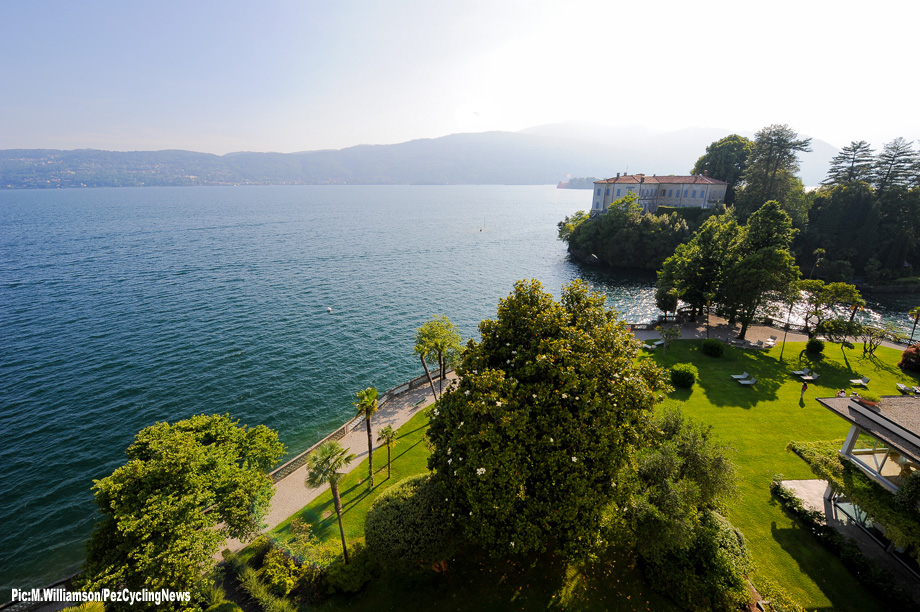 The montagnes get most of the press in Italia but we love the lagos, too.

We stayed in lovely Verbania, our hotel was Majestic with wonderful views of Maggiore.

We had our late evening meal in a ristorante just across from the lago, the pace of life there is down a gear or two from Milano to the south, people have more time – the water has a calming effect.

In the morning we sought out the beautiful and poignant lakeside war memorial we’d read about as the boats on the lago went about their business – wonderful. 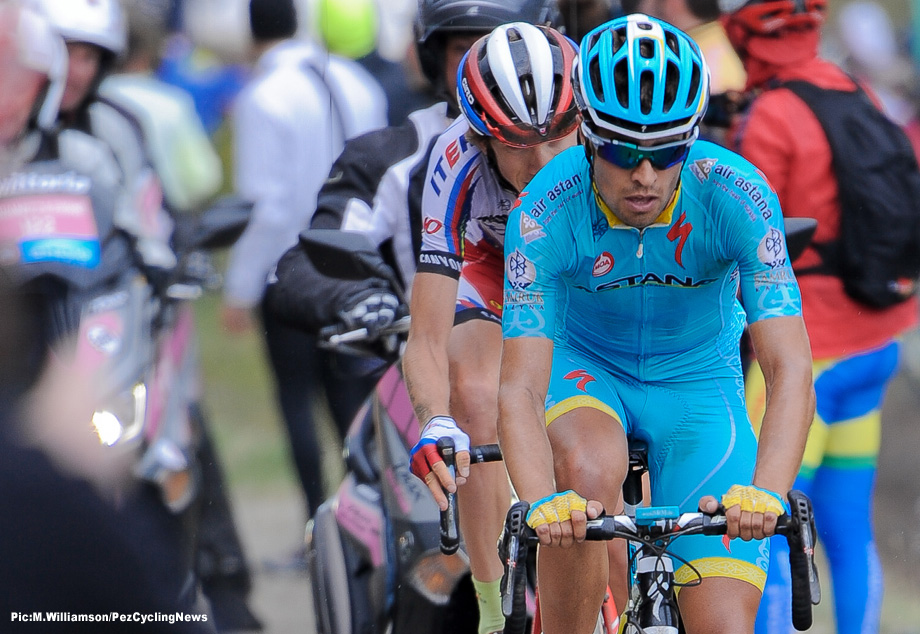 This Giro had been his breakthrough, albeit Charly Wegelius told us; ‘he’s been good for a long time, he’s no surprise.’

We liked his manner, he was obviously ‘held back’ to allow Aru to go second but handled it in a dignified manner.

It’s unlikely he’ll stay with Astana – too many chiefs and he’s the wrong tribe. . . 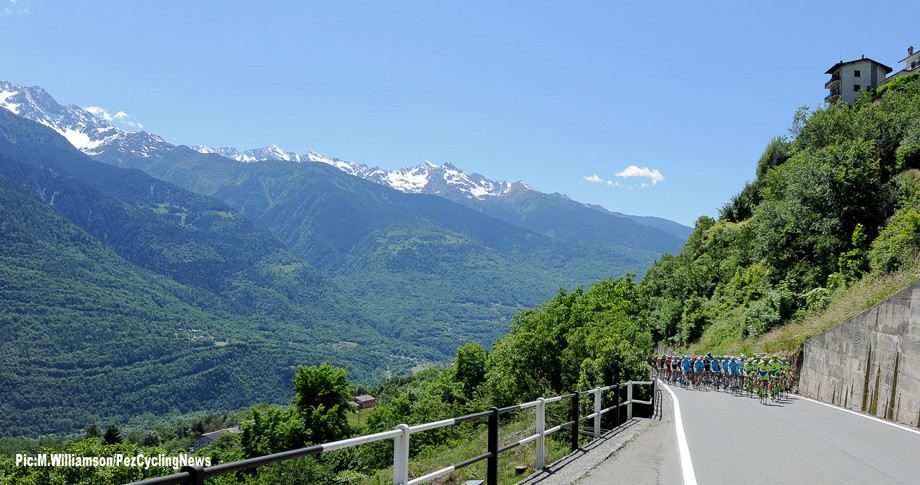 For me, there were just too many mountains in this race but the mountains are where the greats express themselves and where the time gaps are greatest.

The Alps really are beautiful – ancient, snow capped, silent witnesses to the grinta and resolve of these scrawny men who dare tilt at them.

Visconti won best climber but the question is; have the Van Impe, Pantani and Fuente days gone forever? 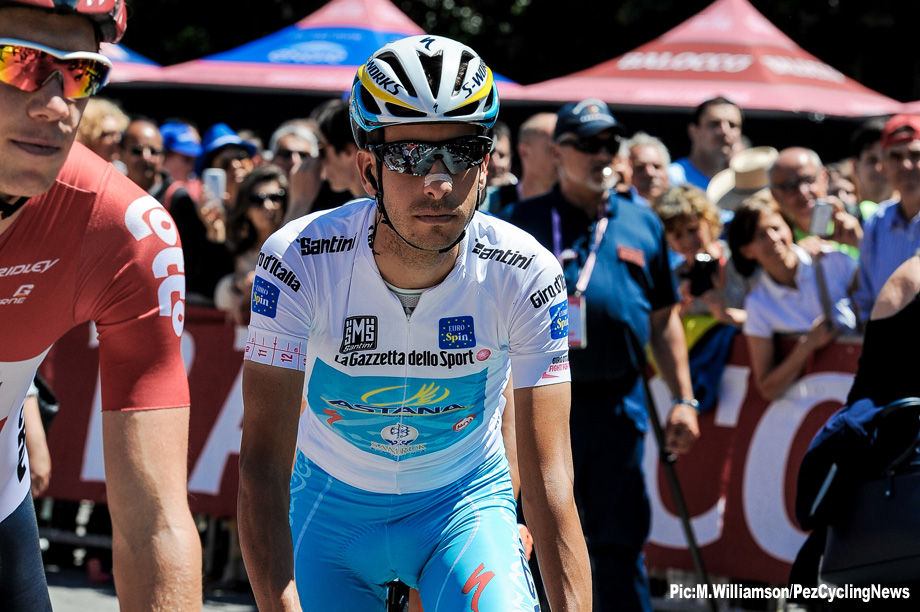 We have to include him, he’s the ‘coming man,’ he’s Italian, he’s aggressive, he won two stages and was second on GC.

But PEZ pundit and soothsayer, Viktor reckons if you believe the podium then you should believe in Santa Claus, too.

We think that’s perhaps pushing it a bit, but we were a tad surprised that he could come out and win two stages after crawling round a couple of the stages prior on his hands and knees. 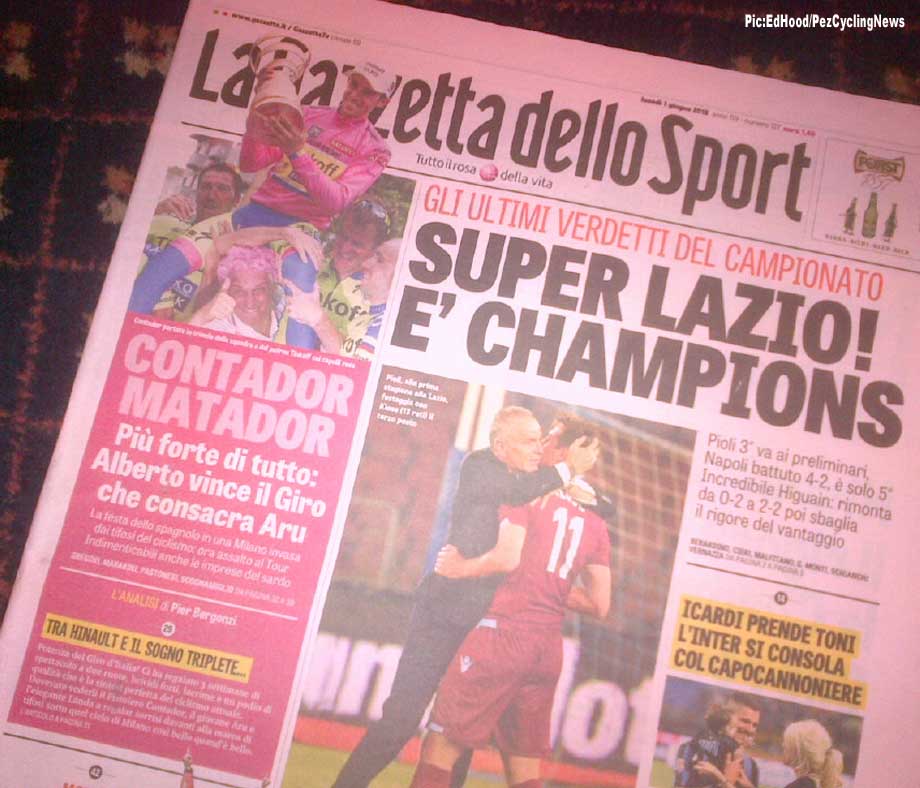 It’s their race so they have to make a good job of it – they do that, and more.

Your day doesn’t start properly until those lovely pink pages have been scanned.

Results, pictures, stats, analysis, history and they don’t bother if they offend – it’s how a sports paper should look.

The one we get (two days late) in Britain is skinnier and has much less colour than the original and best Italian edition. 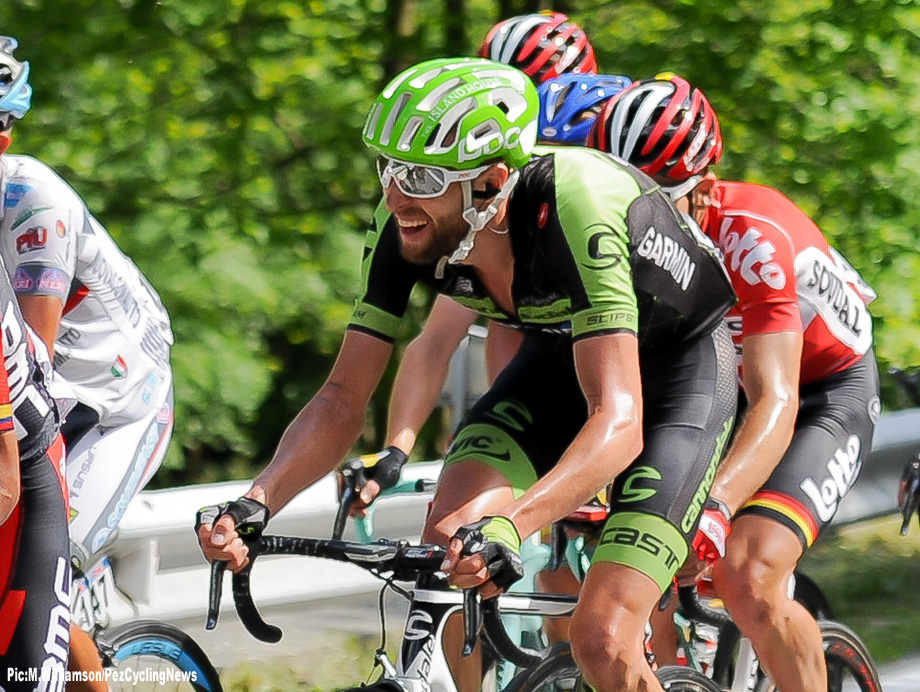 His team mate Marangoni says the big Canadian is a ‘warrior’ and that’s hard to argue with.

As the race entered it’s toughest phase – the brutal third week, he’s been there every day with two second places in crucial stages.

The Gazzetta’s ‘end of term report’ gives him 7/10 for his fight back: we think he was worth more. 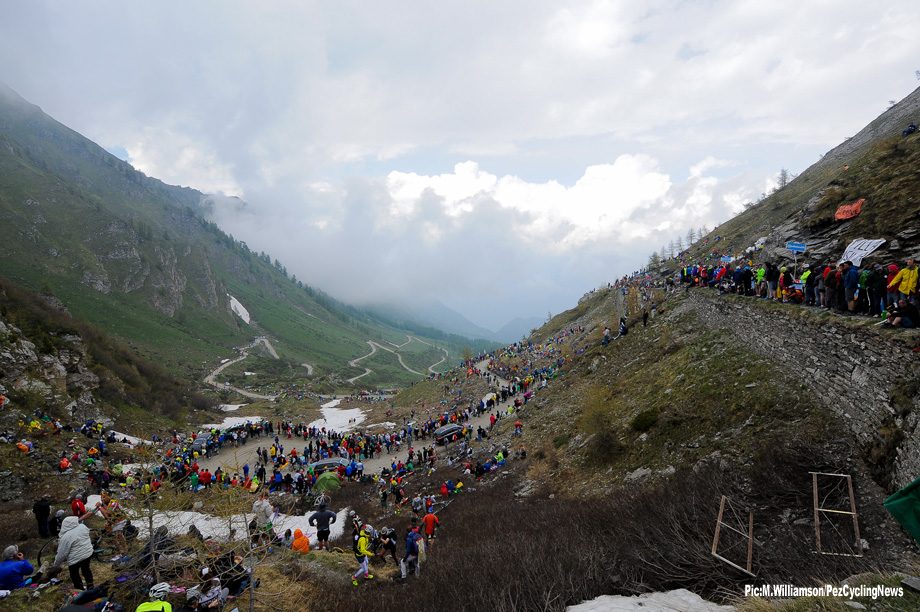 I have to be truthful, I’m not sure if this stage really belongs in a modern Grand Tour – not on the second to last day, anyway.

But for pure spectacle it was hard to beat.

Perhaps our marathon drive and the sense of relief at ‘beating the system’ to get up there had something to do with it but to be up there on that saddle where the summit sits was really special.

The crowd was huge – and they’d either had to pedal up or walk some kilometres from the bus park on the tarmac side – and the atmosphere was electric.

Landa was first over, taking the Cima Coppi as the Giro’s highest point.

All of the leaders were flying but Aru in particular was very impressive.

And very unusual to see Alberto on a ‘giornato no’ distanced before our very eyes on the tornantes which meander back down the mountain side.

The whole experience will stay with us for a long time. 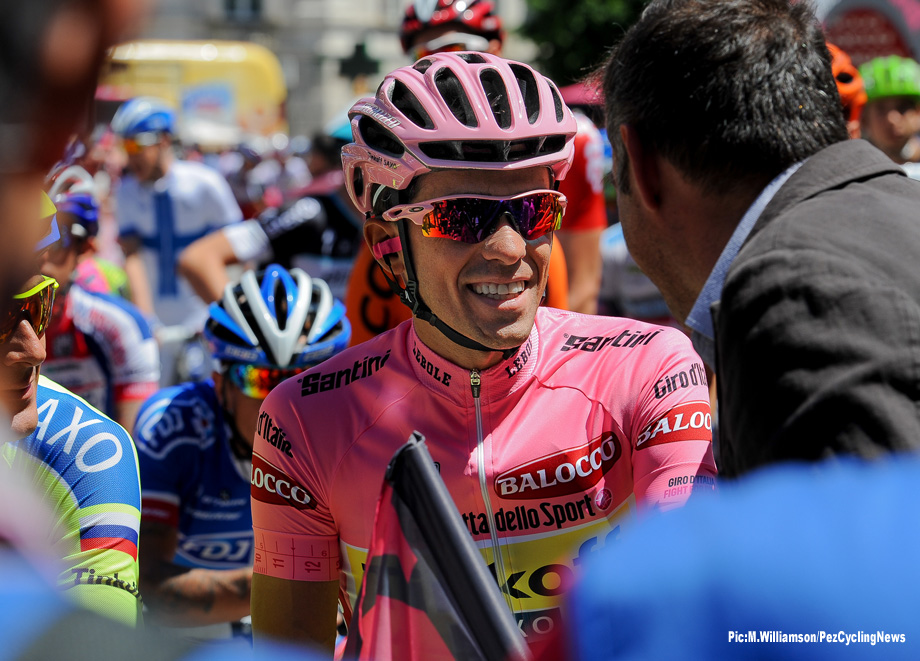 He’s won all three Grand Tours – one of only six men in history to do so, along with Nibali, Gimondi, Anquetil, Hinault and Merckx.

He stands fourth in the all time Grand Tour winners list; Merckx has 11, Hinault 10, Anquetil 8 and Bert has 7 but if you add in the two where he was declassed it’s 9.

He weathered crashes, the Astana machine, a ‘giornato no’ on the Finestre and an English-speaking press which seems incapable of recognising him as one of the greatest stage race riders who have ever lived to win an excellent Giro which contained hardly a dull moment.

Let the man savour the moment.

LOOK TEAMS UP WITH PARIS-MODENA ™