Race Report: Just when you thought this Giro couldn’t provide another high-octane thrill ride, the first-category Monte Ologno, and some carefully nurtured righteous anger, fuelled a further chaotic stage. We had it all: breakaways, chases, races within races. Dropped chains and thrown-down gauntlets. The maglia rosa on the charge. It was perfect.

To Philippe Gilbert went the stage, with a virtuoso breakaway masterclass; to Alberto Contador went the overall honours, as he mercilessly battered another nail or two into his rivals’ classification coffins.

How it went down: the first two-thirds of today’s romp are flat for around 125 kilometers. This being the Giro, we actually kick off in the Swiss village of Melide, nestling beside beautiful Lake Lugano. Then we return to Italy, via Varese and Sesto to Lake Maggiore, then through Arona and Stresa to Mergozzo and Verbania for the finishing circuit. 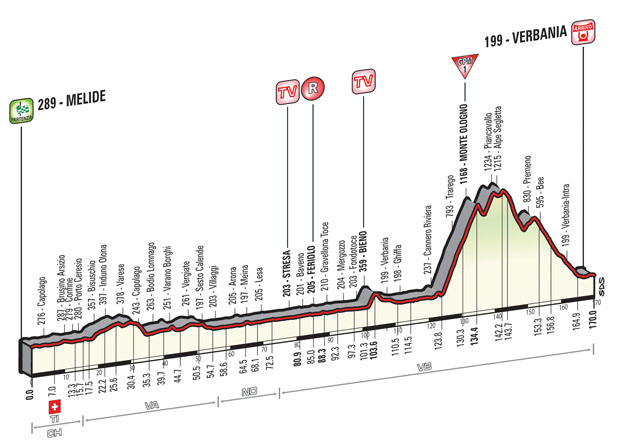 After the first passage through Verbania, it’s the day’s significant bump in the road. The Monte Ologno averages 9%, but hits a maximum of 13%.

The stage starts off steady. When the break finally goes … it really GOES! It takes until kilometer 44 of 170, but as the move gets working the lead balloons to over 12 minutes with Tinkoff-Saxo looking the other way. 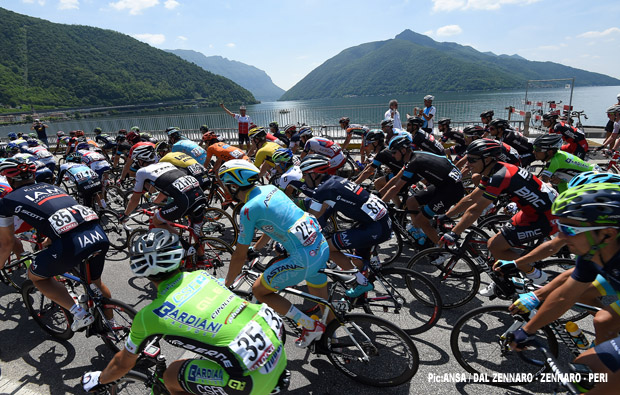 A nice lake view for the start

There was a futile and energy-squandering attempt to bridge over by Lampre-Merida’s Roberto Ferrari, Jesus Herrada from Movistar and Trek Factory Racing’s Fabio Felline.

Tinkoff-Saxo had no-one to fear in the break, so they sit steady on the front of the peloton, trying to keep Contador safe ahead of what is sure to be another bullet fast climb of the first-category Monte Ologno, and a terrifyingly speedy descent into Verbania.

Inside 70 kilometers left and the lead is nudging 13 minutes, so the breakaways surely understand that a little more co-operation and they’ll be fighting for the stage win among themselves.

46 kilometers left when we hit the Monte Ologno, and straight away Chad Haga is feeling the effects of a firestorm Giro in his young legs, and then Busato has to let go.

Unfortunately, we’d lost Damiano Cunego by this point, with a suspected collarbone fracture, and then there’s a big pile-up in the main field. Practically all of the remaining Sky riders are involved barring breakaway Siutsou and nominal leader Leo König.

Tinkoff-Saxo put the hammer down, none too discretely, as the news filters through that Astana’s Mikel Landa is caught behind. Ain’t payback a son of a bitch? The Spaniard has four team-mates with him, motorpacing it behind a team car, but it’s looking like oxygen debt and it isn’t pretty as they try to limit the damage.

Up front, De La Cruz ramps it up and the escape group splinters like balsa wood skyscrapers in a Godzilla B-movie. In the main field, Juanjo Lobato is down and in pain. 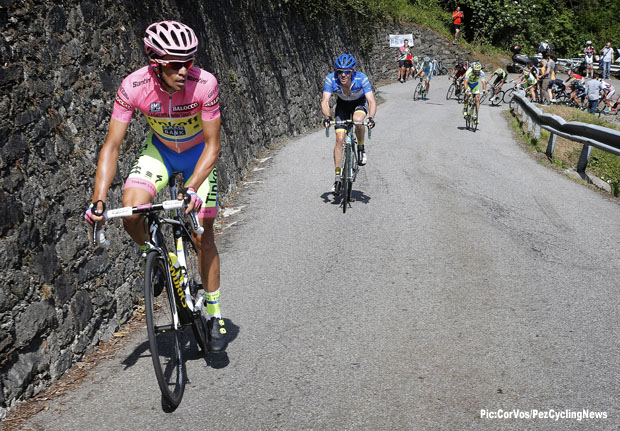 Contador imperiously comes to the front, dancing on the pedals and trying to add more speed. Forty clicks to go and El Pistolero tries to hammer in the final nail. He powers away, one team-mate and mountains leader Steven Kruijswijk with him, but this looks decisive. Fabio Aru is dropped, but Landa is clawing his way back into the main group.

He won’t catch the break, but suddenly Contador has two minutes on Aru/Landa; up front, the big escape group is down to five: De La Cruz, Siutsou, Moinard, Nocentini and Bongiorno.

Aru is looking to Movistar for help, sitting in a group of about a dozen riders, with Landa just behind. They’re gradually closing the gap to Contador, but the Spaniard wants this to hurt.

Contador looks as if he drops a chain with about 36 kilometers remaining, but before he even starts to lose balance he’s reshipped it, and a Tinkoff-Saxo mechanic earns his money, leaping out of the following car, giving him a push, and normal service is restored. The gap to Landa and Aru is about a minute.

Four leaders (Bongiorno, Siutsou, Moinard, De La Cruz) over the Monte Ologno, with Chavanel, Gilbert and Nocentini at thirty seconds. Contador battering away still, but looking for time, not a stage win.

Aru is really struggling, dropped by Landa’s group as Movistar try to move Amador up the general classification. And when you’re struggling, it’s worse still to see one of your team-mates (Kangert) go by to set the pace for another (Landa).

Cannondale-Garmin’s Ryder Hesjedal catches Contador just at the summit of Monte Ologno and we hit the technical descent. The road then pitches up to Piancavallo and Alpe Segletta, as the four up front start to attack each other.

26 clicks to race and Contador/Hesjedal pick up the Canadian’s buddy Davide Villella who sets the pace. This is all good for Contador, and the gap starts to stretch out again.

Twenty to race, and after Hesjedal has been asking, Contador comes through, streaking through the corners … his lead on Landa is now tickling two minutes. The Canadian, too, wants to improve his overall standing.

The front four have been mucking about too much, and Gilbert catches and passes them with 19 kilometers left. The Walloon is tucked low over the top tube, slicing through the sunshiny air.

This last stretch is wide, well-surfaced roads running downhill from Premeno to Verbania at fairly benign gradients before flattening out with five clicks to ride. It’s a run through the town center to the waterfront for Gilbert who has thirty seconds on his chasers. 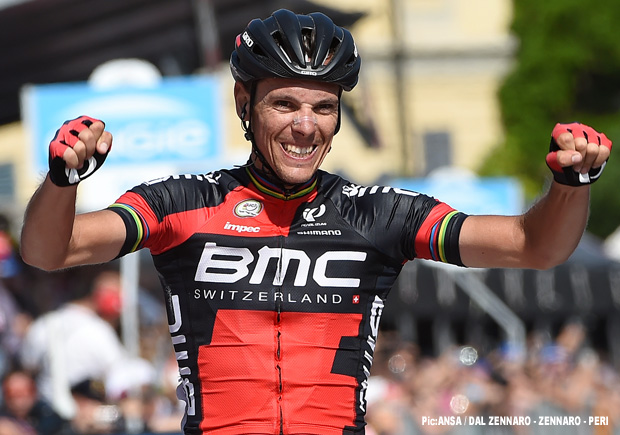 Gilbert is already celebrating and a big smile is on his face before he even reaches the red kite, and he cruises home for a second stage win in this Giro. Bongiorno is second as Chavanel takes third.

Hesjedal and Contador plough to the finish and, although their advantage isn’t what it was, the Spaniard picks up another 1’12” on his rivals.

The stage winner, Philippe Gilbert (BMC), said: [Watching TV screen behind podium] “It’s the first time I’ve ever watched the Maglia Rosa finish on TV when I’ve been in the race! I’m very happy with this second stage win. We rode a great race with Amael Moinard, my team-mate in the breakaway. We worked together. He went with the best climbers in the group, I followed at my own pace, and when I crossed the mountains point with a deficit of 40 seconds, I knew I could get back to them.”

The Maglia Rosa, Alberto Contador (Tinkoff-Saxo), said: “Today’s scenario was a bit different from what happened on the Mortirolo. Before the climb, my team was working hard on the front and expending energy because we knew that we had to be at the front going into the climb, and we wanted to avoid problems. In the event, Landa was caught behind, for the first time in the race. I’m very happy to have gained more time in the General Classification. I’m tired, because after the last climb it was a time trial, but every day is hard here. We’ll see what happens tomorrow and the following day.”

It’s been another brilliant, bonkers, baffling stage of the Giro, a day on which Alberto Contador raced as if he was a 1970’s Grand Tour contender – just attacking because he felt like it might work. No calculations, no saving energy, no watching the watts. Fantastic entertainment. 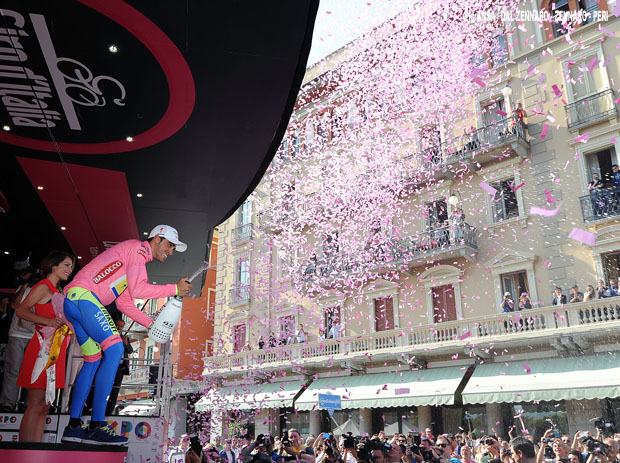 Another minute added to his overall lead