Ed and Martin are into the ‘Giro Groove’ and have this bike race chasing down to a fine art. They’ve worked out the best places to see the race, eat pizza & drink beer, plus find the very important coffee and a read of the Gazzetta. Day 3 of their Giro Adventure rolls to Verbania! 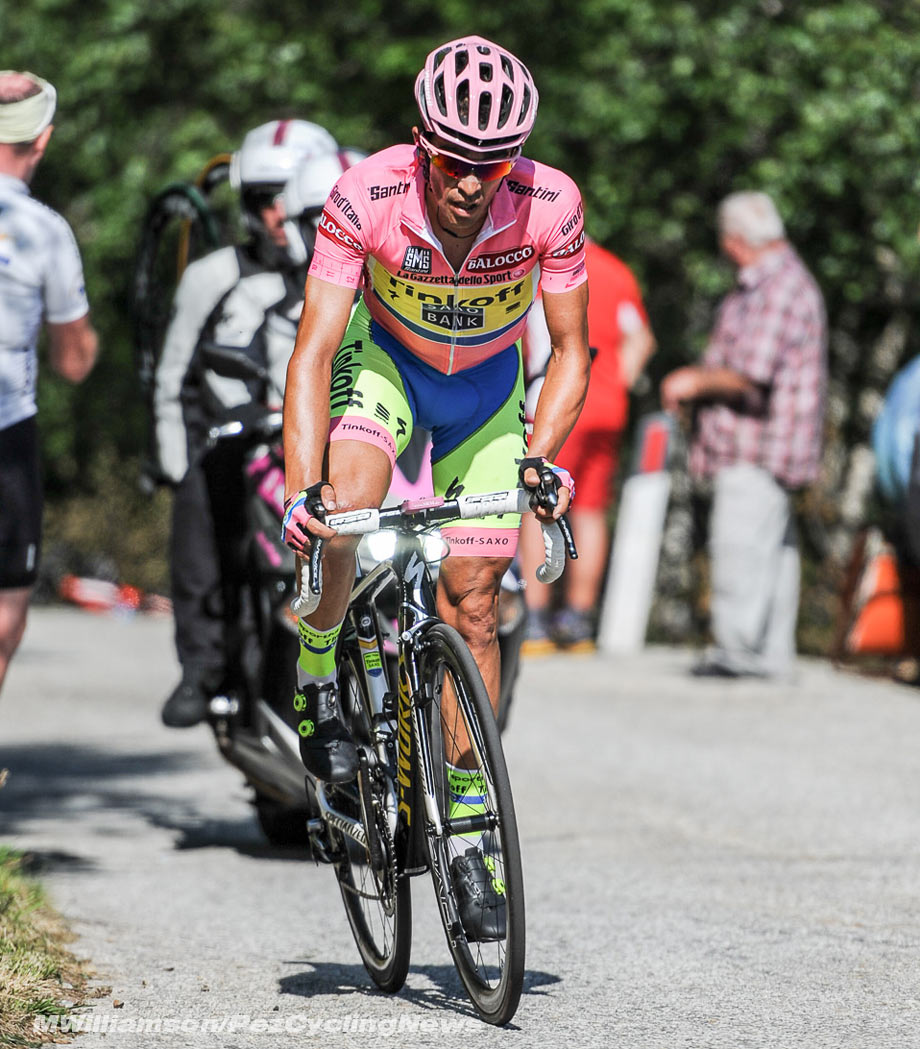 We pick out De La Cruz, Bongiorno, Siutsou and one more with the gap back to Gilbert, Nocentini and Chava at 42 seconds; we’re only 450 metres from the GPM, then there’s another lift before the sweet drop to Verbania and the soigneurs towel on your face – and just maybe a Prosecco shampoo… 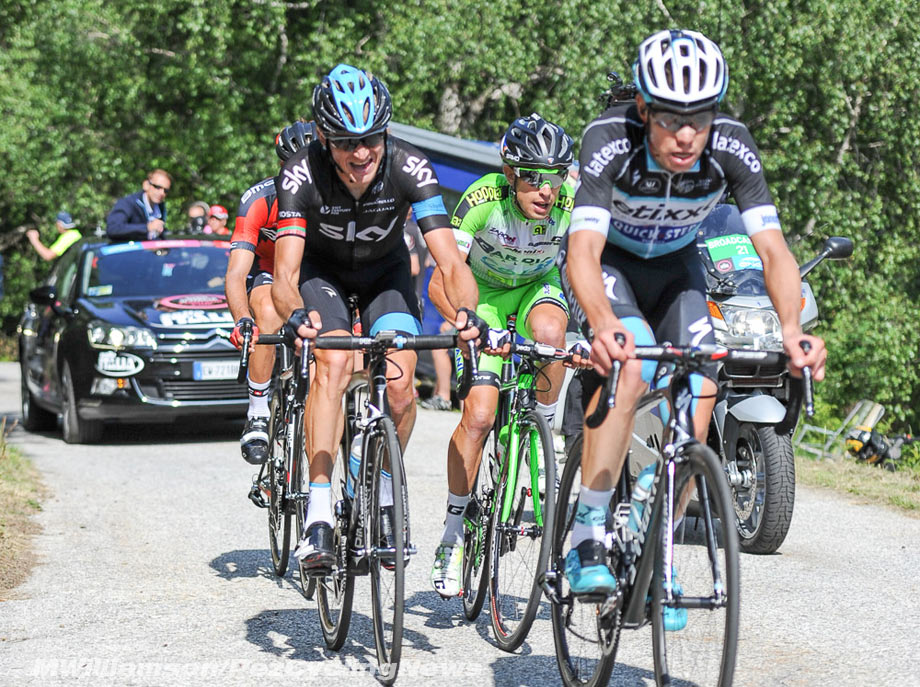 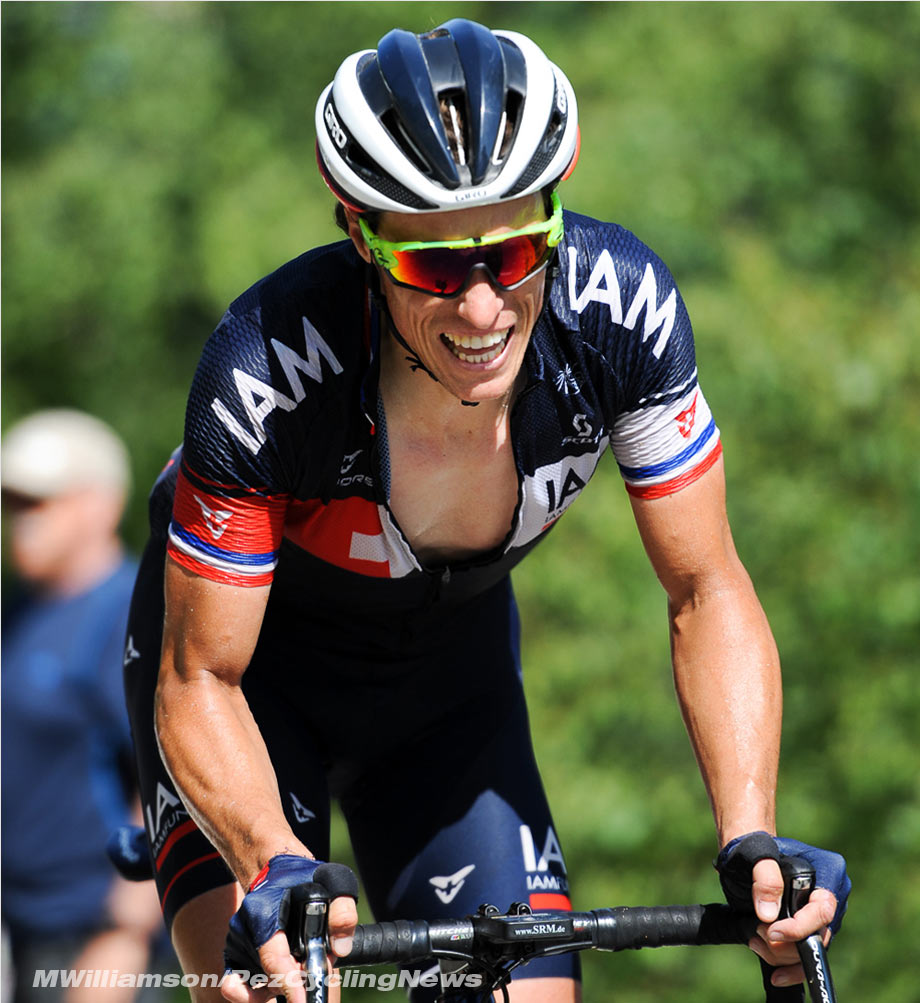 The winner is one of those six guys for sure. The break’s stragglers hirple past; and then there he is – pretty in pink, Alberto. He’s solo, majestic, dancing with just clear mountain air behind him and looking like the star he is, ripping up this nasty climb. 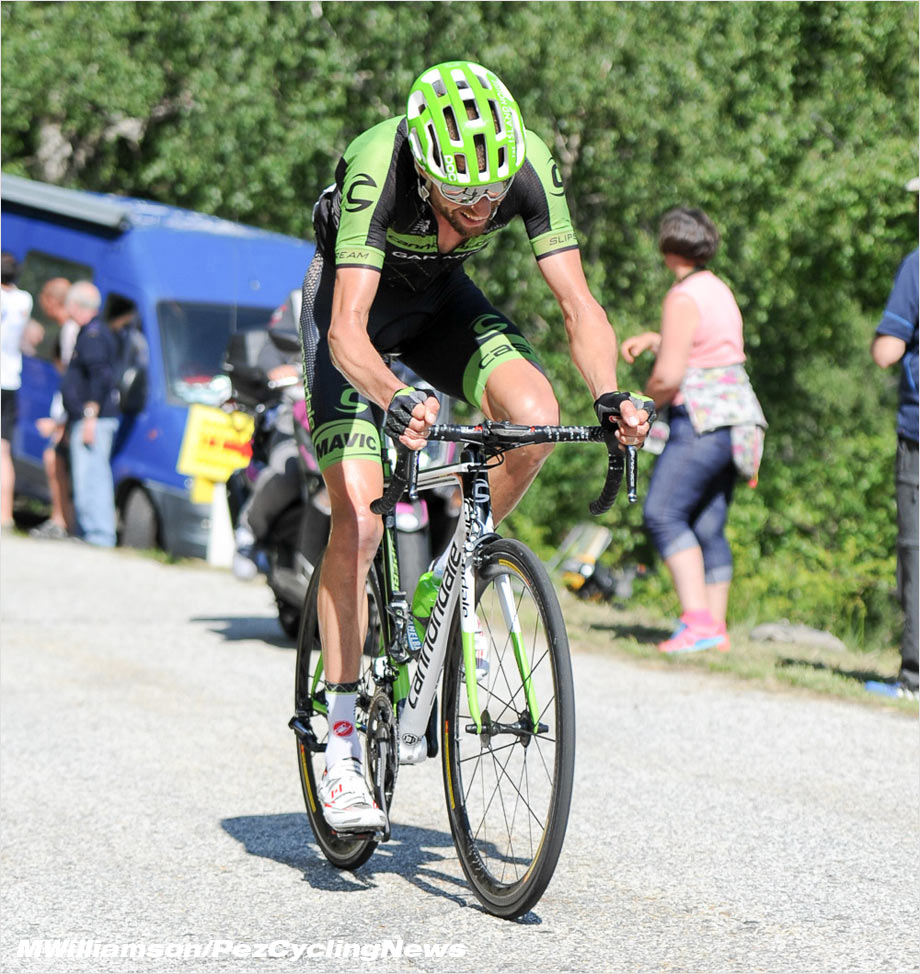 Then it’s Big Ryder, looking not too bad at all and not too far off Alberto – he could move up today? 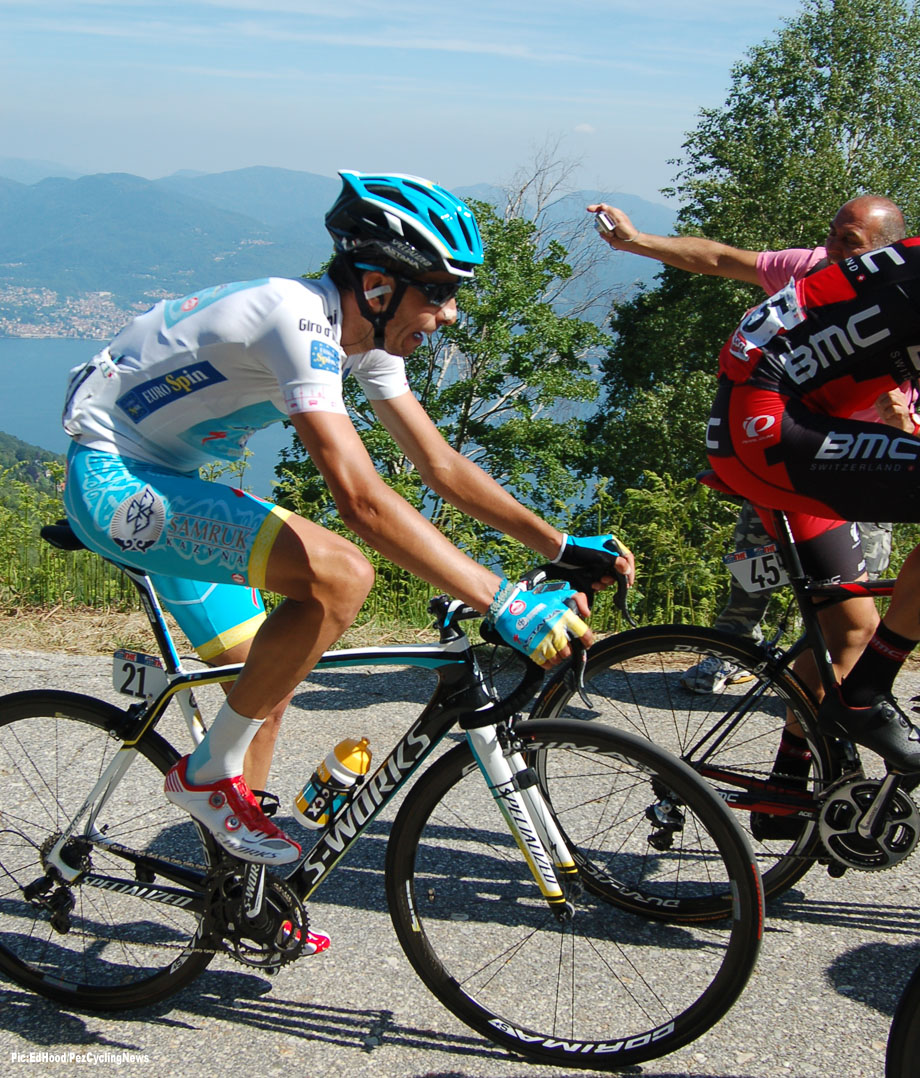 It’s a minute gap; compared to Contador their riding is controlled, steady – loss limiting. Contador is “expressing himself” again, today. There are riders all over the mountain, ones, twos and two big gruppos. 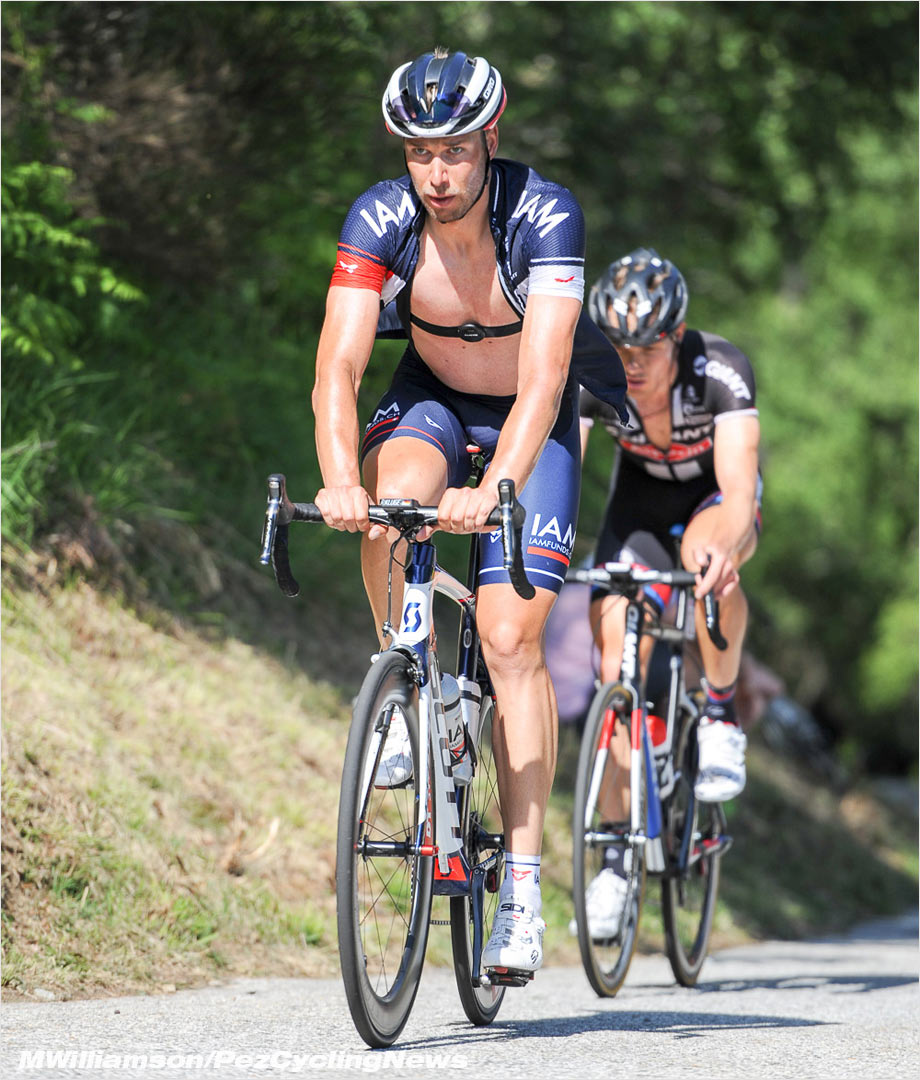 Big six day star Roger Kluge is having a better day today than he did yesterday when he was out the back door early. 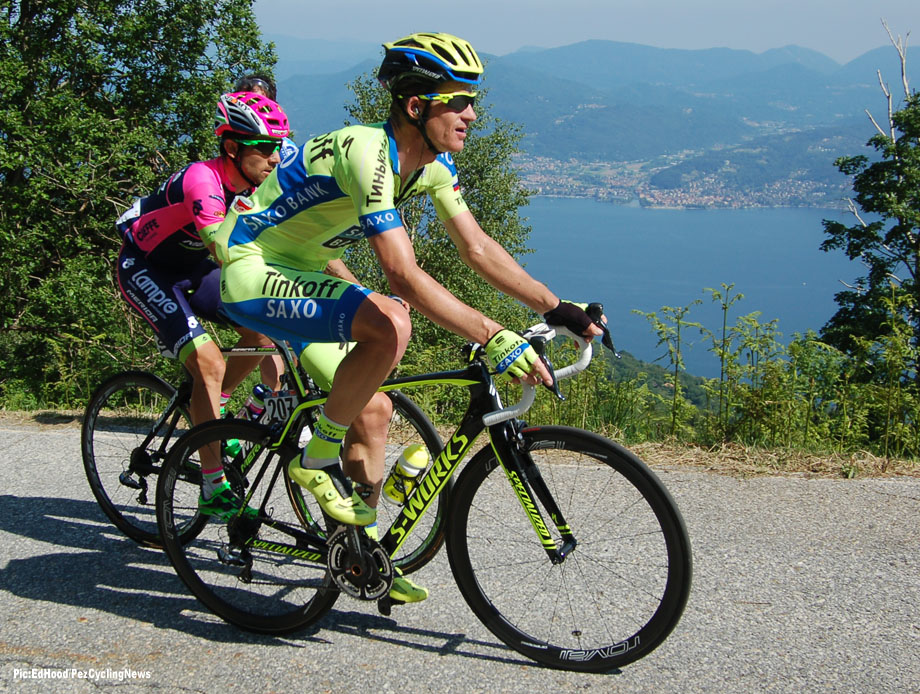 Mick Rogers won two stages here last year but this year it’s ‘all for Alberto’ and there’s no room for personal glory. 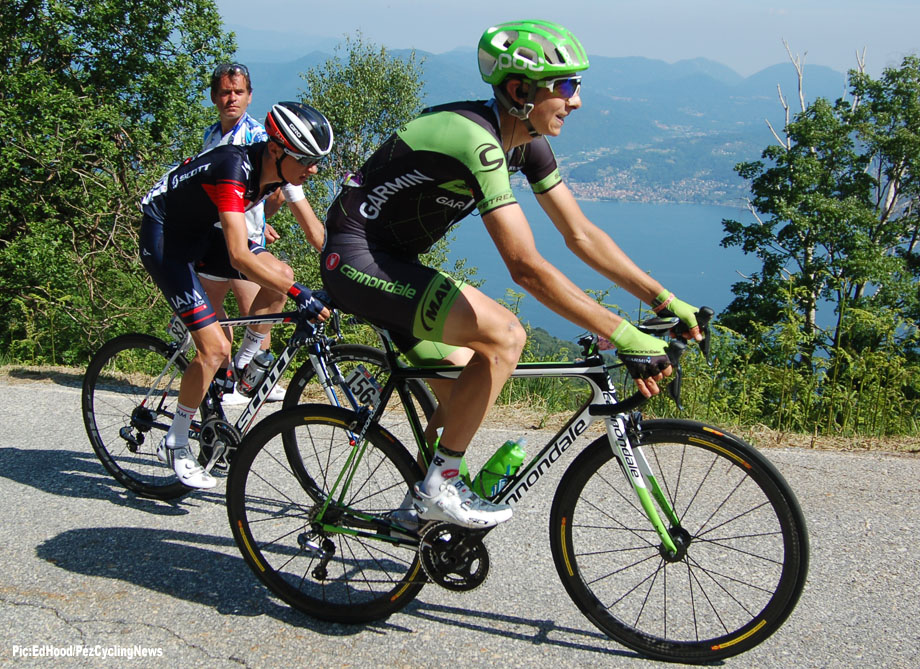 David Formolo has won a stage though – but there won’t be another one, this day. 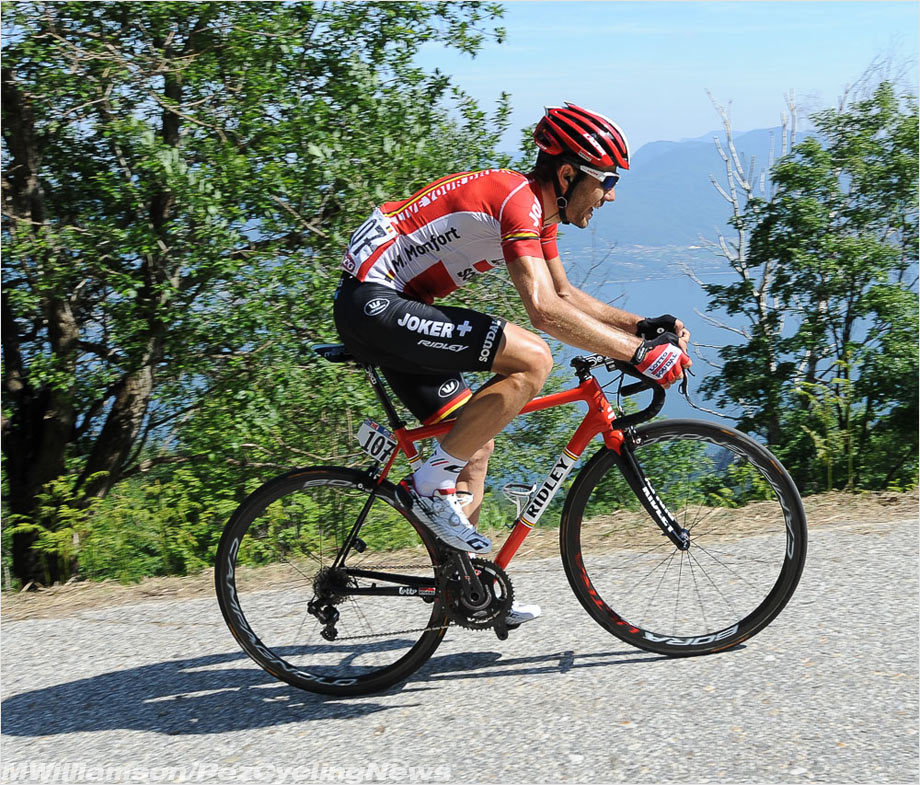 Maxime Montfort has been top ten in this race ’til now but it’s slipping away and tonight he’ll be 11th on GC. 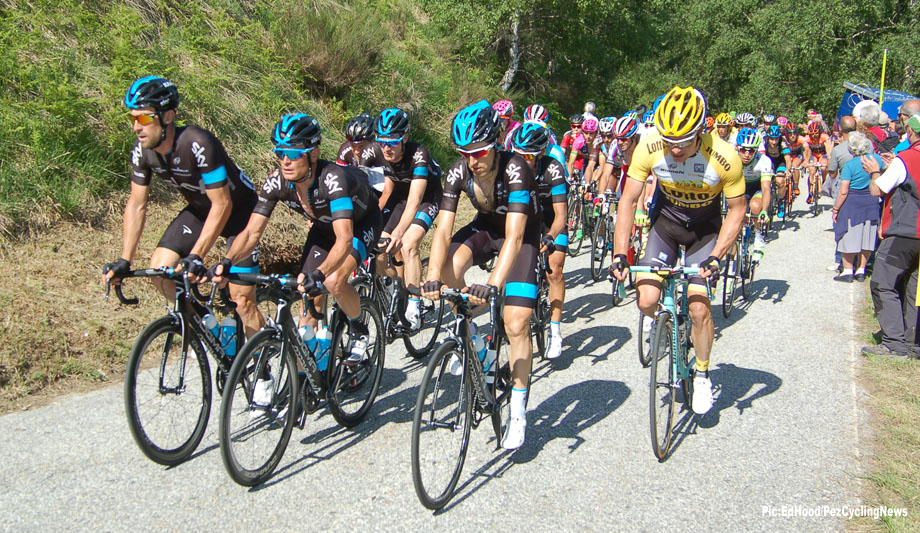 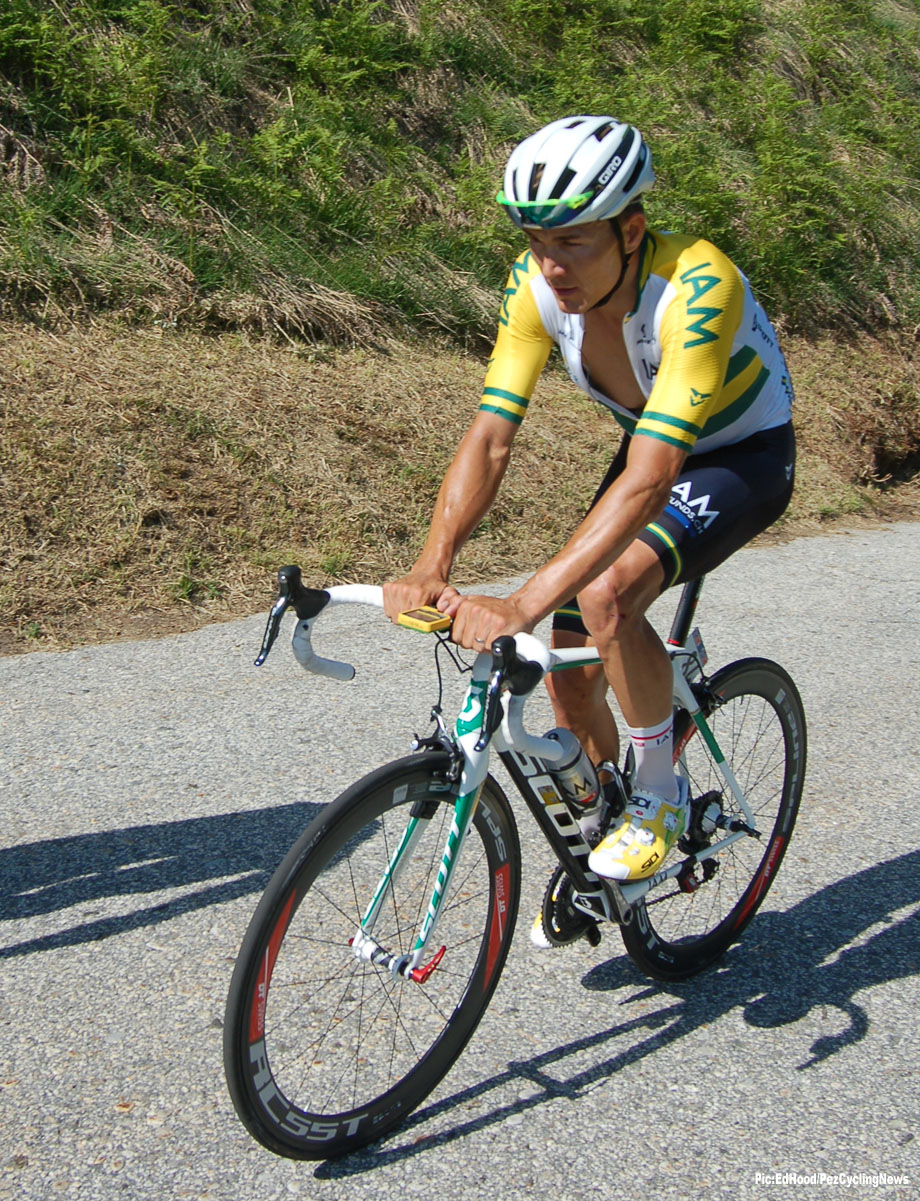 The first gruppo is lead by Sky and we make the last one nearly 20 minutes down on the break; Haussler is in that one – but he’s just marking time, this isn’t a day for his skill set. 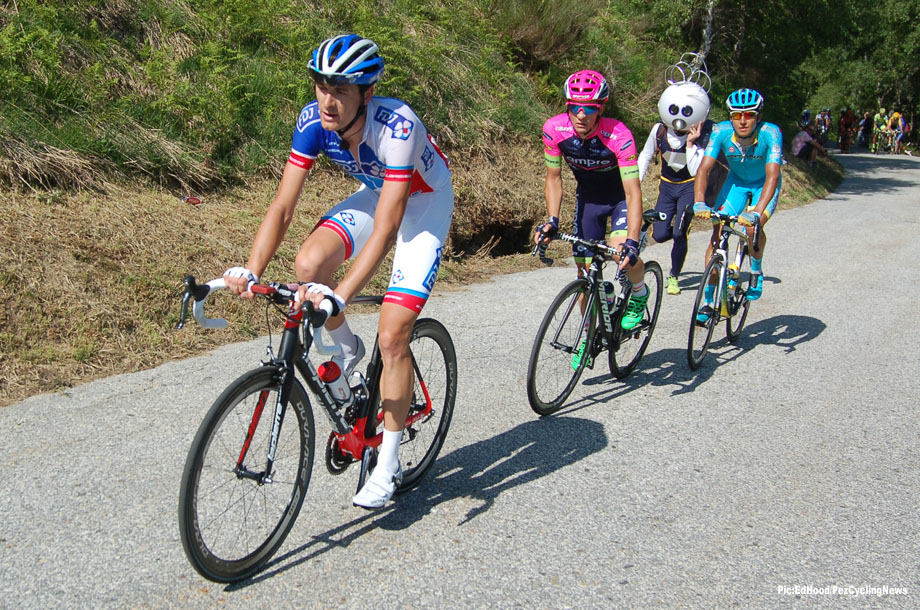 And jeez! There’s a Martian on the hill – or maybe that guy just needs help. 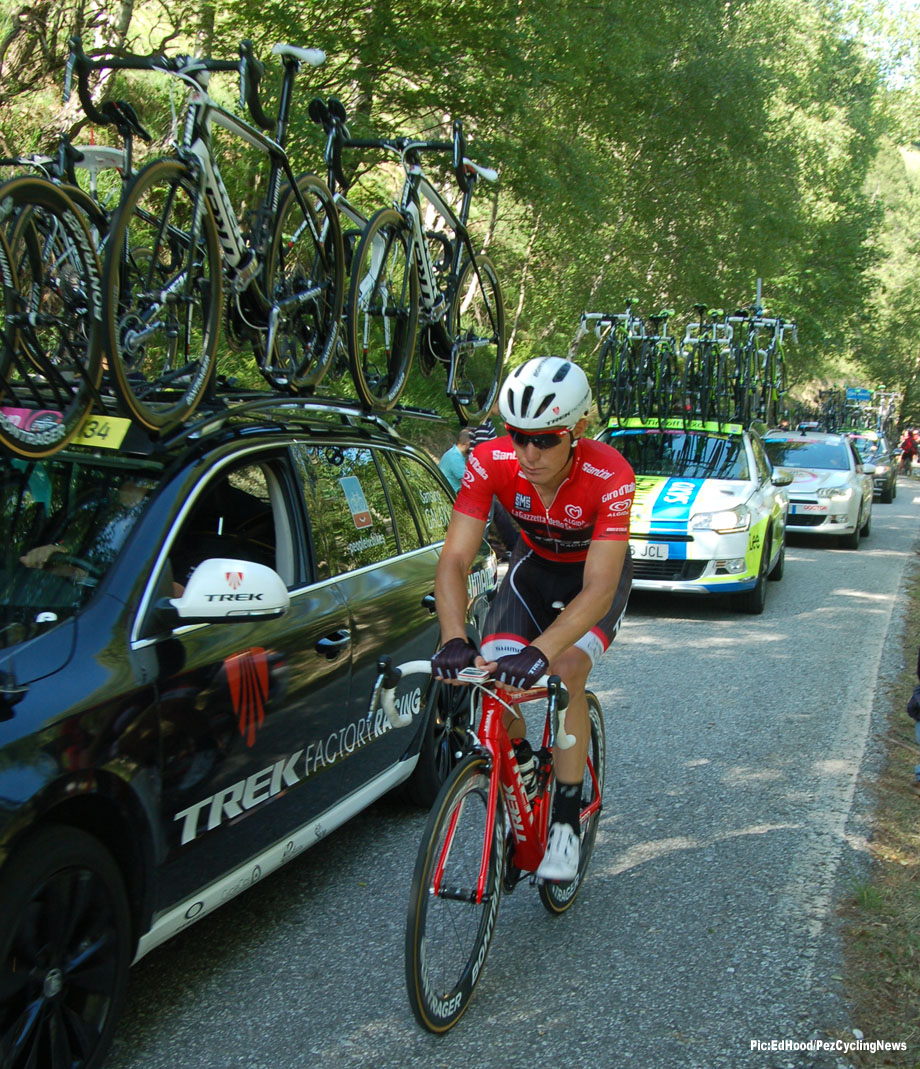 Stone last, behind the auto bus is the man in the red jersey, Nizzolo – saving himself for Milano and that stage win he dreams off after seven second places in Giro sprint finishes in his career.

Time to GO or we’ll be up here ’til tomorrow with all these bikes to come off the hill. 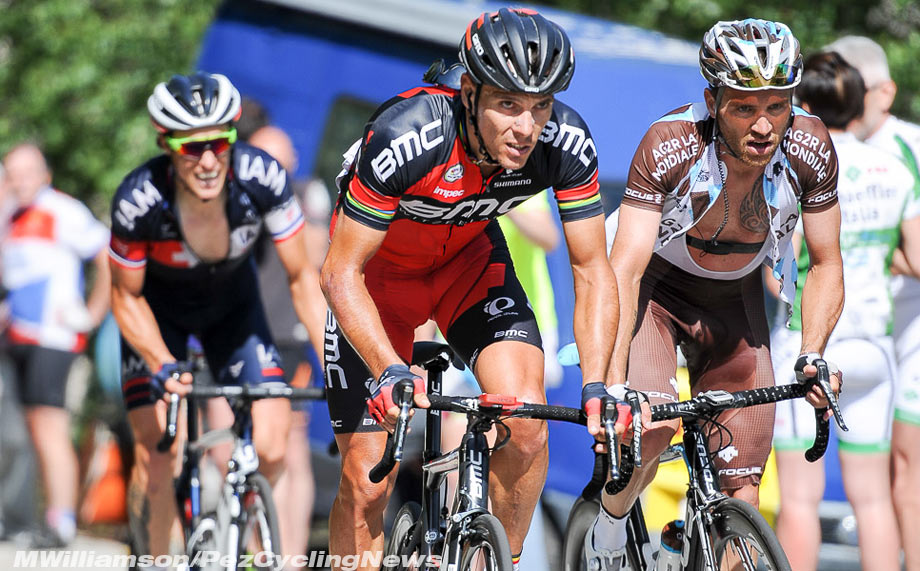 Kris texts us; “Gilbert…went from the break at 19km” – we’d tipped Nocentini but only if Gilbert didn’t get back. That means there’s still 12 teams without a win in this race.

It’s hectic off this mountain – and the shift started so calmly for us. . . .

We stayed in Switzerland last night, Chiasso – but fortunately the Italian border was only a couple of hundred metres away. I say fortunately because Swiss commercial culture is based on the time honoured formula of; ‘think of a number then double it’ – a €6:00 pizza in Italy costs €17 in Switzerland, a €1:40 Gazzetta costs €3:00; so PEZ ambled across the border for our pizza and beer.

Yesterday’s stage to Lugano got us to thinking about the ‘good old days’ – in ‘Cipo’s’ day there would have been no breakaway on that early climb and there would have been chat in the peloton with no one out the back. But there’s no Capo any more and it shows in the toughness of the stages – even Contador is saying that this is one hard race.

Today’s tappa has the proverbial ‘sting in the tail’ and is well suited to anyone with the morale or legs for an ambush. The first 120 K are flat and fast, then bang ! Monte Ologno; 10.4 K with a 9.0% average and 13% max. The top isn’t the top, there are three wee kicks after the GPM before a mad plunge to lovely lakeside Verbania and glory/disappointment. It’s a stage for Nibali – a pity he’s in the middle of the Atlantic, altitude training.

We’re heading for Laveno and the ferry across beautiful Lago Maggiore to the stage finish at Verbania where we’ll do the ‘Ologno loop’ back to the finish. Time for coffee – and the Gazzetta, in the sun. 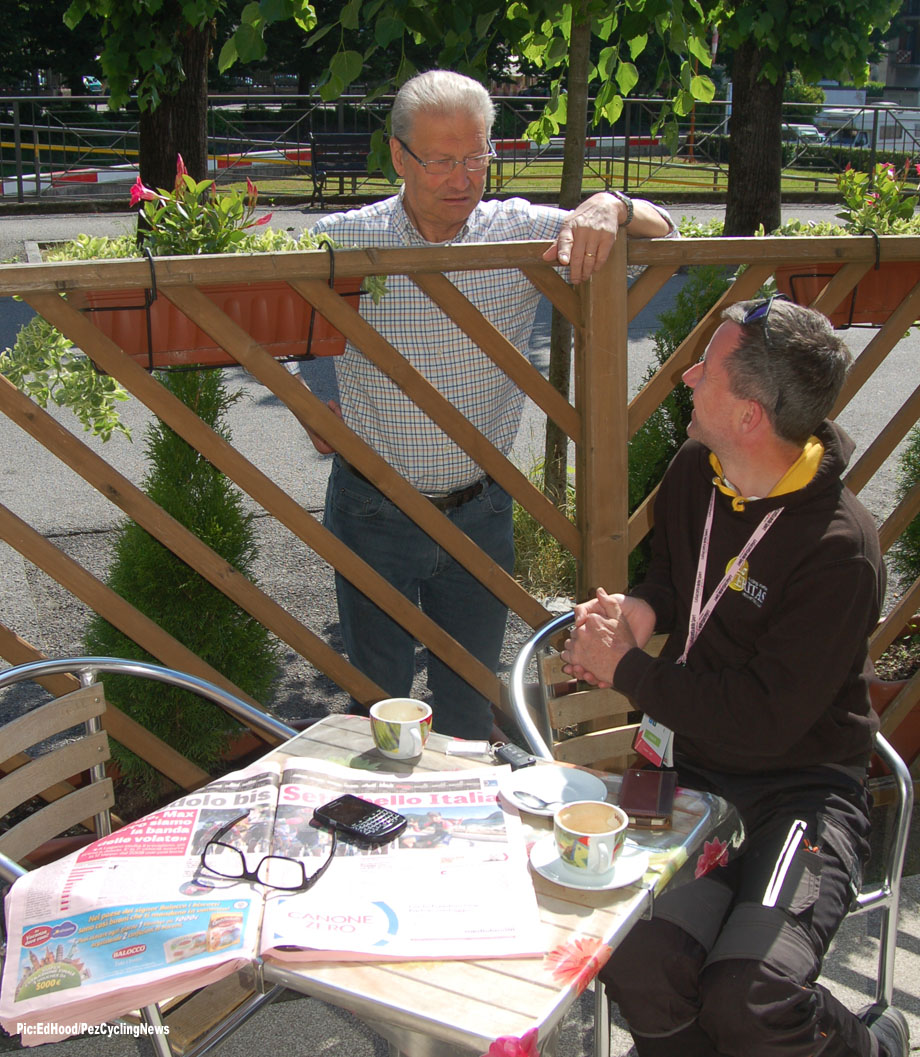 And we make a new friend who explains to us that the Giro is a more beautiful race than the Tour de France and – we’re only 100 metres away from the casa of the first of the Campionissimos, Alfredo Binda who was from here in Cittiglio. 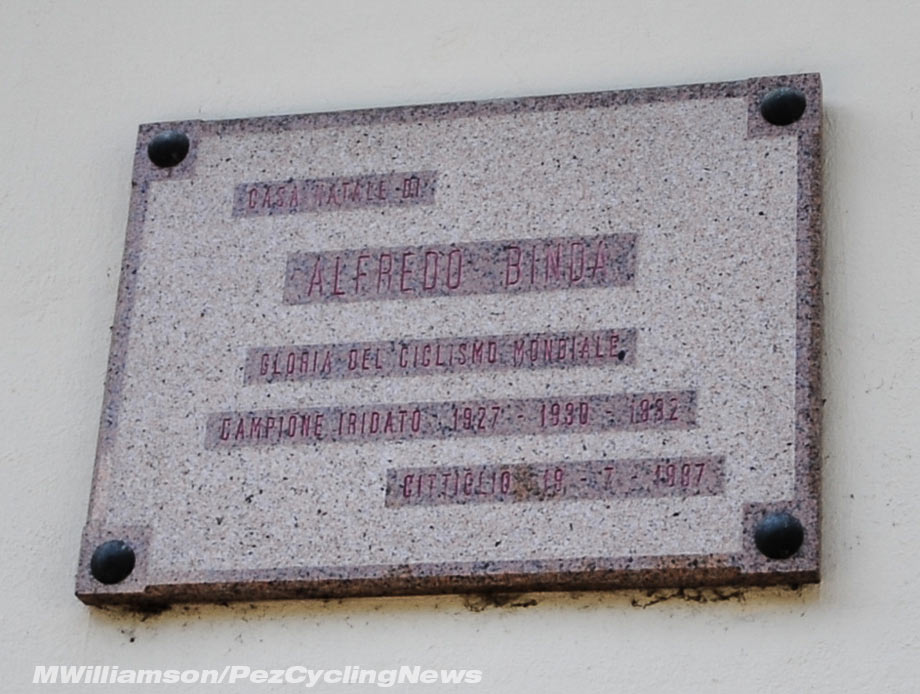 Binda won three Worlds, two Primaveras, four Lombardys and five Giros, our amigo’s papa did secretarial work for the Maestro and insists on taking us to see the house where a plaque records the great man’s birth. 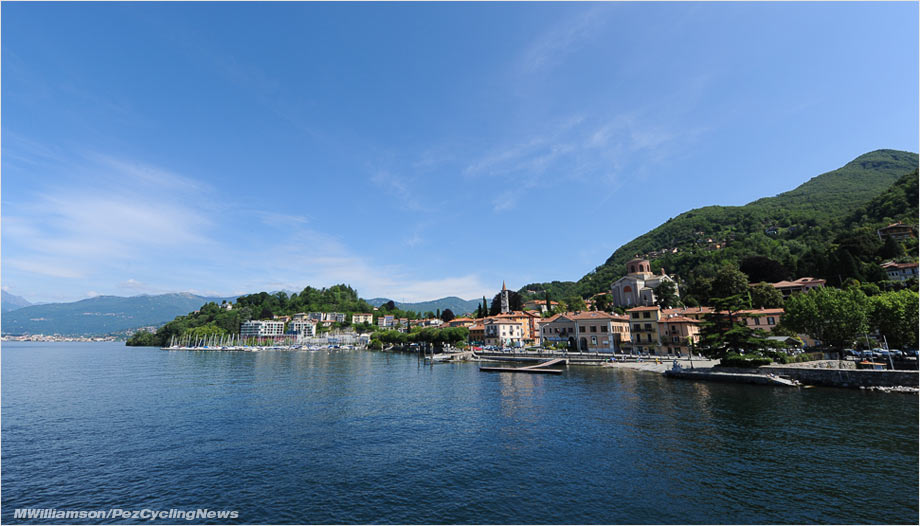 Laveno and the ferry to Verbania; if you’ve ever driven in northern Italy around Milano/Como/Varese we don’t need to explain to you about the traffic – it’s dire, average speeds by bike are higher that you’ll achieve in a car. The ferry cuts out a big loop through the worst of the sticky traffic goo and delivers us to beautiful Verbania with much less stress than a long drive with its attendant chronic tail gating and total ignorance of the speed limits and safe driving practice.

Verbania is at the bottom of the ramp as the ferry nudges in and within 50 metres we’re on the percorso; tracking the beautiful lake side. 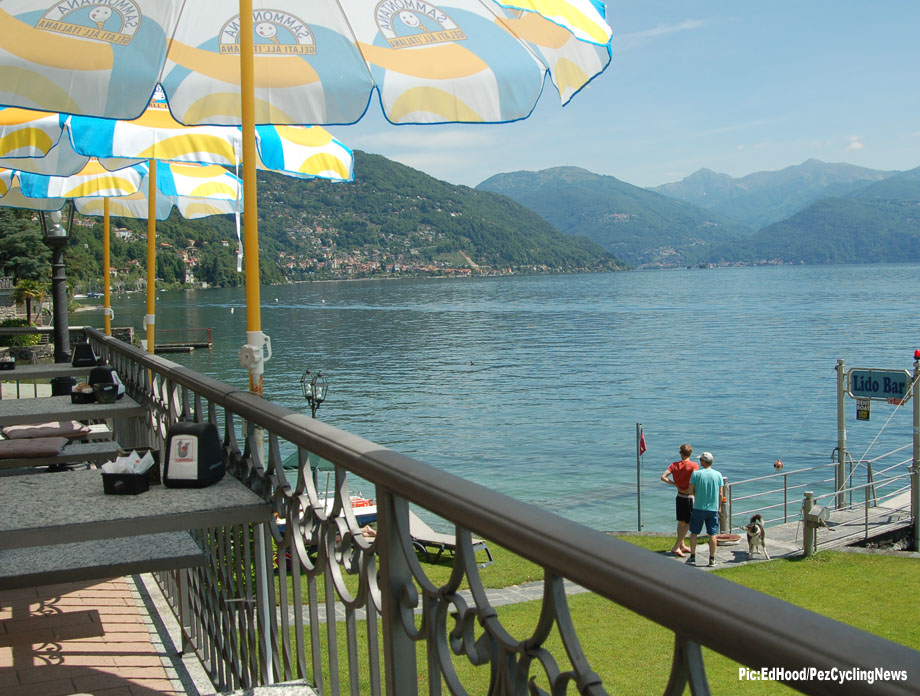 It’s too beautiful not to have a pit stop and the Ologno is just along the road.

More Gazzetta time and stats; most kilometres off the front in this Giro – 481 kilometres by Marco Bandiera of Androni; Modolo’s wins before this Giro, 33, but with zero Grand Tour wins; 10 teams have won a stage with Lampre taking four of those; 12 teams have not won a stage and will be becoming increasingly desperate; Nizzolo leads on points by 17 from Modolo; Kruijswijk leads the mountains for Jumbo by one point from Intxausti of Movistar; Aru continues to be best ‘Giovani’ by 43 minutes whilst Astana are best team on time and points. The Ologno is a beast, right off the coast road at Cannero Riviera and you’re on it, ramps, hairpins, pain.

Next up is to find our spot for the carnage; it’s not unlike the Mortirolo in terms of gradient and the fact that much of it is in the trees – but back at PezCentro they want scenic back drops so we inch higher and higher until at inside 500 metres it opens out and there’s our spot.

The little VW is coaxed off the road and up onto the grass – and we’re in business. Time to settle down and wait; we had to get up early to beat the road closure – no more ‘Mortirolo misses’ today. This’ll be a tough test for Aru, he conceded a total of 2:43 to Contador on the Mortirolo albeit the lead-in to the Mortirolo was far tougher than it is today.

The ‘sportiv crew’ are out in force; brackets creak and roller cages tinkle against spokes as MTB guys twiddle past in ‘granny’ gears. No caravan today, not on these roads; but the tat vans battle on – how can you survive without a Giro T-shirt and bandana? The choppers churn the air ever-closer to us, the Sky team helper (one of what seems like dozens) gets ready, the scooters swarm and it’s Il Giro in full effect. 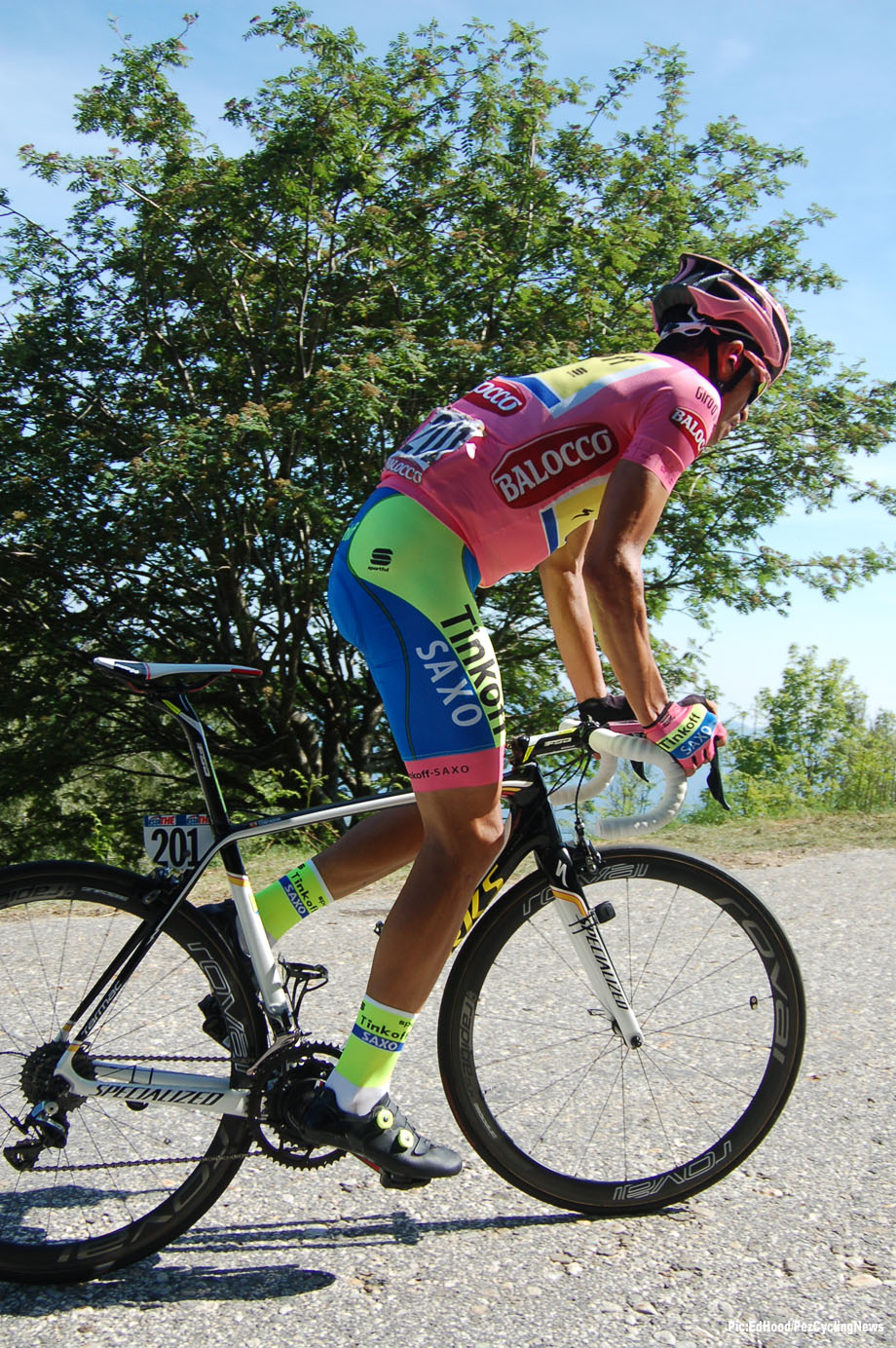 Gilbert makes it two and Contador adds another 1:15 – another great stage of a great Giro. But we need PASTA !