And to think, this morning started so well… We’ve been in them all; the hotel from The Shining, leaks, no heating, no hot water, no breakfast, no wi-fi…
But last night… “Majestic” by name, majestic by nature, back to a time when hotel staff didn’t wear Korn T-shirts and call you; ‘mate.’

Lakeside views with a balcony, an endless supply of hot water and a breakfast out of ‘Lifestyles of the rich and famous.’

Senor Pestes, we salute you.

And on the subject of things PEZ, we hope you like the new format; our piece for Stage 18 was the first time the new ‘wide screen’ pictures were used – we love it and hope you do, too.

The stage 18 finish town of Verbania nestles beside Lago Maggiore; we’d heard about the wonderful statue which is the centre piece of the memorial to the local men who died in the 1914-18 war when Italy fought with the Allies against Austria. 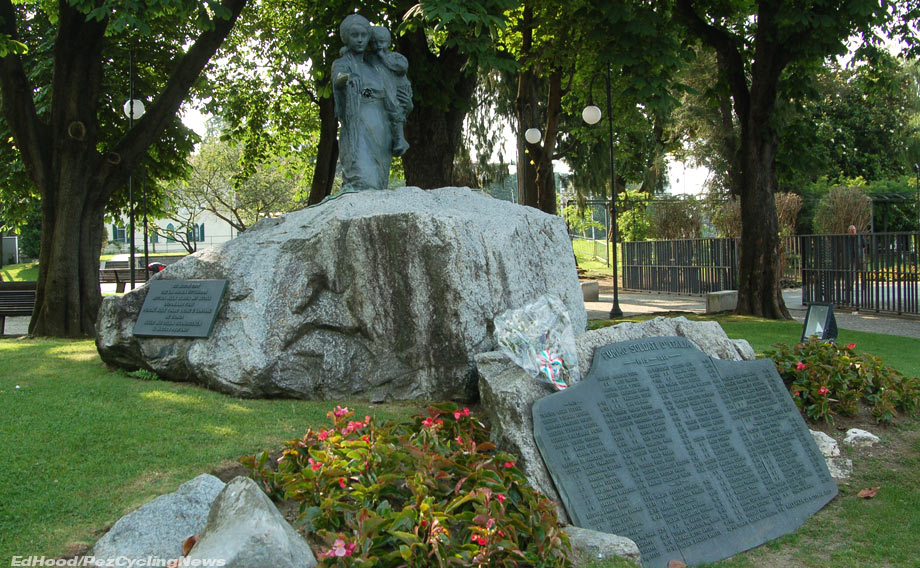 ‘Dove’ magazine describes it thus; “not a fallen soldier in a heroic or military pose, but a young, sad widow, kneeling above the plaque listing the names of the fallen, with one hand dropping a few flower petals, and, in her arms, a child too young to realise the tragedy that has struck, sucking his finger with innocence.

The bronze, by the genius Paolo Troubetzkoy, stands not on a high pedestal but at eye level.” 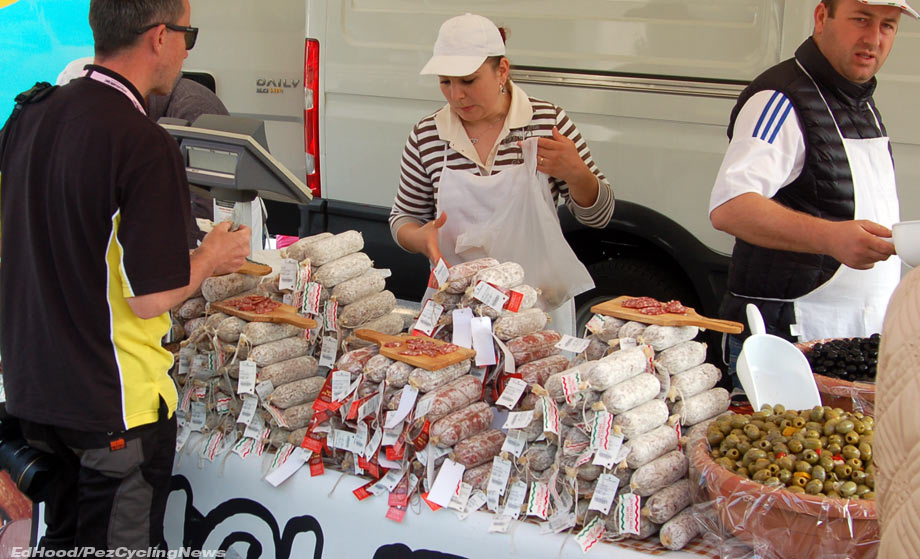 And there was a street mercato in Verbania; the sales girl on the pastry/cheese/salami stand was brilliant and we had to get out of there quick before she sold us anymore pastries.

We’re going to drive the percorso, to get a flavour for the first two ascents then embed on Cervinia to watch the show.

En route the first paper shop we can find, we pass a breaker’s yard – even the scrap yard guys salute the Giro.

“Alberto the wolf punishes Landa” says the headline – for sure. The word ‘vendetta’ is used too – best not mess with Alberto, he has a long memory. And Amador says it’s possible he can go third on GC at Cervinia today – we look forward to seeing that tussle; and don’t forget Amador won at Cervinia in the 2012 Giro so it’s not all just talk.

We’re down to 165 riders from 198 starter and just Astana, F des J, Giant and Saxo still have full squadras. 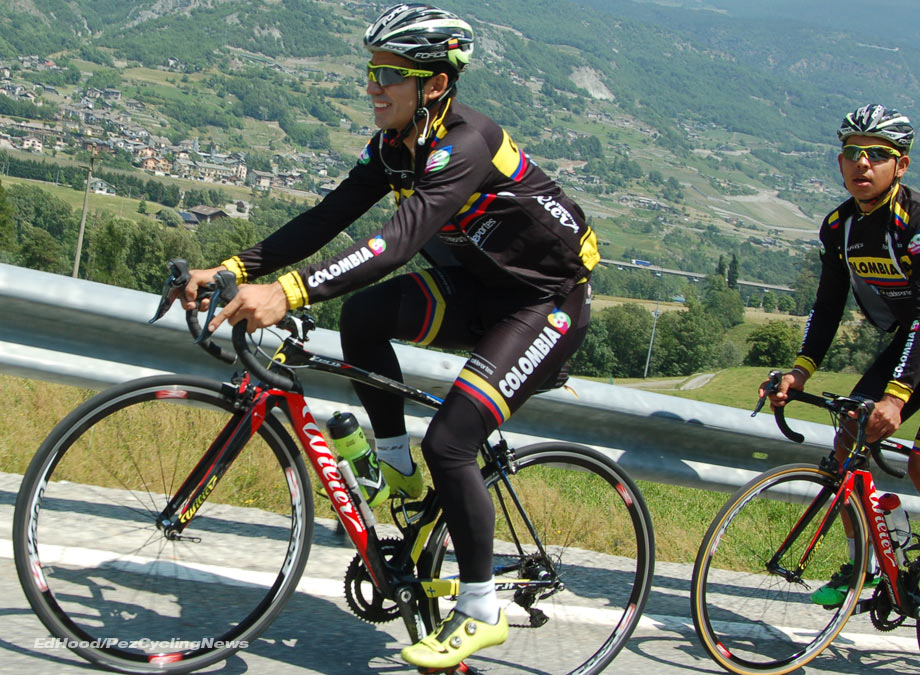 Fenis with 92 K to go and we pass the Claudio Corti’s Pro Continental Colombia squad out training; ‘Ciao ragazzi !’ We get a smile and a wave.
They had hoped to ride the race but with Androni, Bardiani, Nippo and Southeast all in there, the ‘wild cards’ soon go.

The Saint Barthelemy climb doesn’t mess around; valley floor, hang a right and we’re straight into the tough 13% section; total length is 16.5 K and average grade is 6.7%. 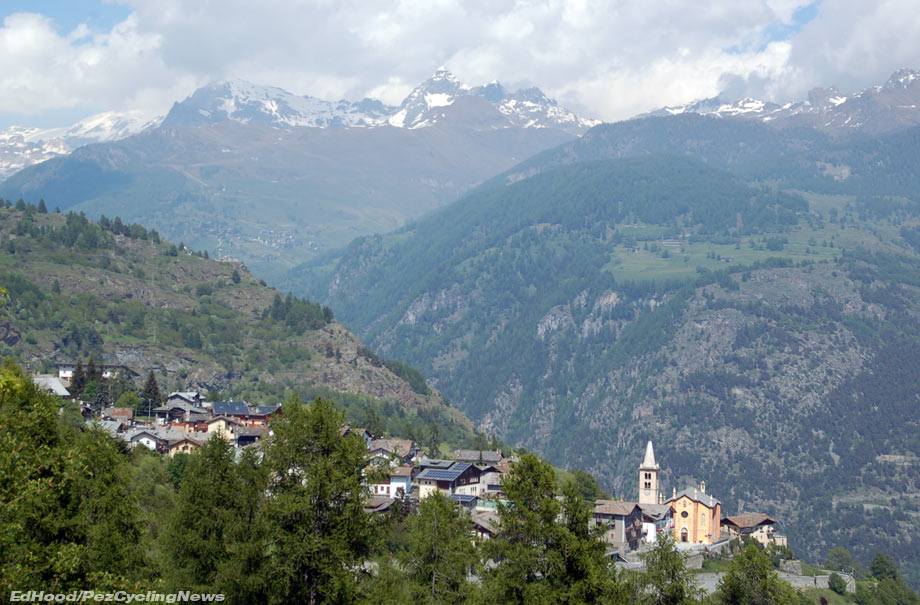 The views are splendid as it eases from horrible to hard, slicing across the hillside. The views may be magnificent but are witnessed by very few fans – this is maybe the quietest major Alpine col we’ve ever driven.

The descent is fast, well surfaced, not too technical. It’s very windy on the valley floor and we’re no sooner down that it climbs again – Saint Pantaleon, 16.5 K with an average of 7.2% and a max. of 12%.

Coffee time inside 45 K and time to demolish our wee pastries from Verbania. Dee-licious !

Upward, onwards – tornantes, views, nice surface, few fans but lots of wind – not as savage as the Barthelemy but sore nonetheless.
More nice views into the valley and a descent which isn’t too technical.

The road is wide, well surfaced – we can remember Gotti winning up here in 1997 as well as Amador, three years ago. It’s cool in the strong wind, half way up the climb and it feels like a tail wind to us.

The motor bikes begin to appear, some of the cops are standing up, it’s a long shift for them too and those backsides get sore. 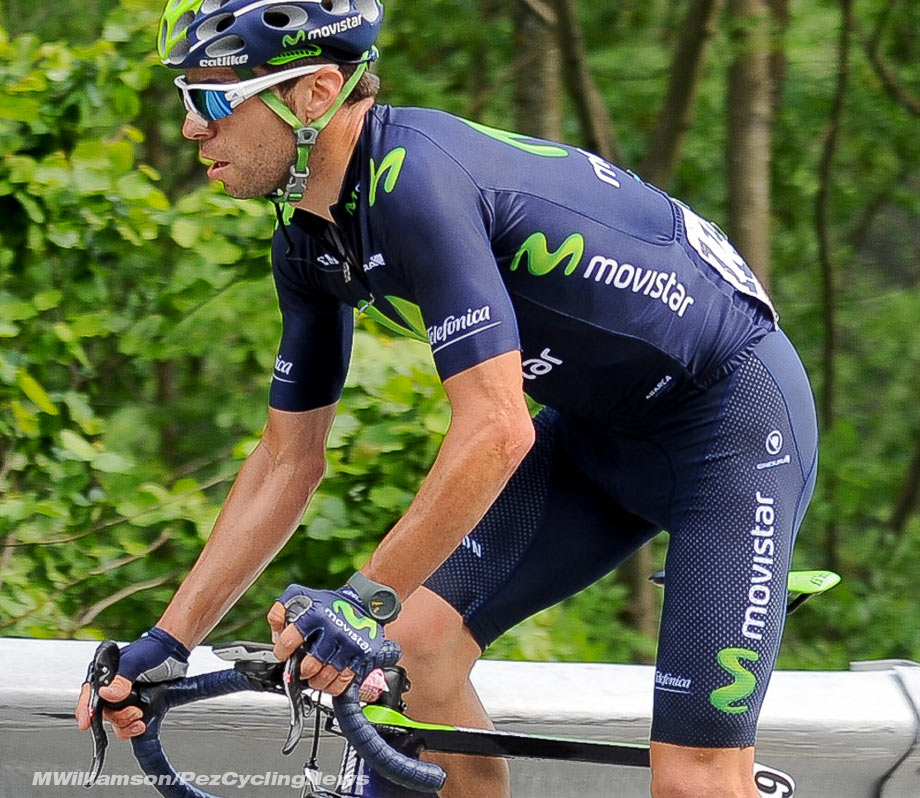 And then it’s Visconti for Movistar, solo but he’s running on empty and he knows it – you can see it, he’s going through the motions but he’s done.
At the end he’ll have the consolation of the mountains jersey. 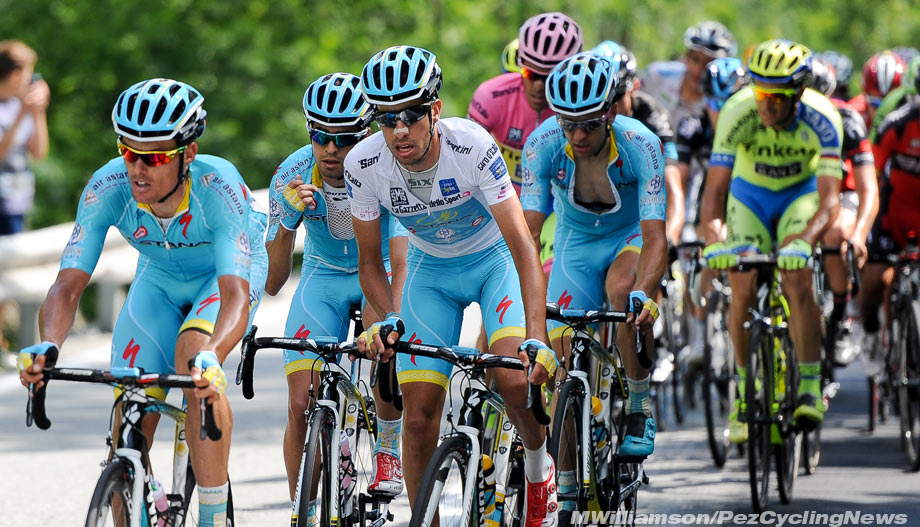 Sure enough, the Astana train is just 30 seconds back – but even they aren’t tapping out their usual rhythm of doom.
We’re half way up Cervinia, around 226 K into this monstrous tappa of 236 K. 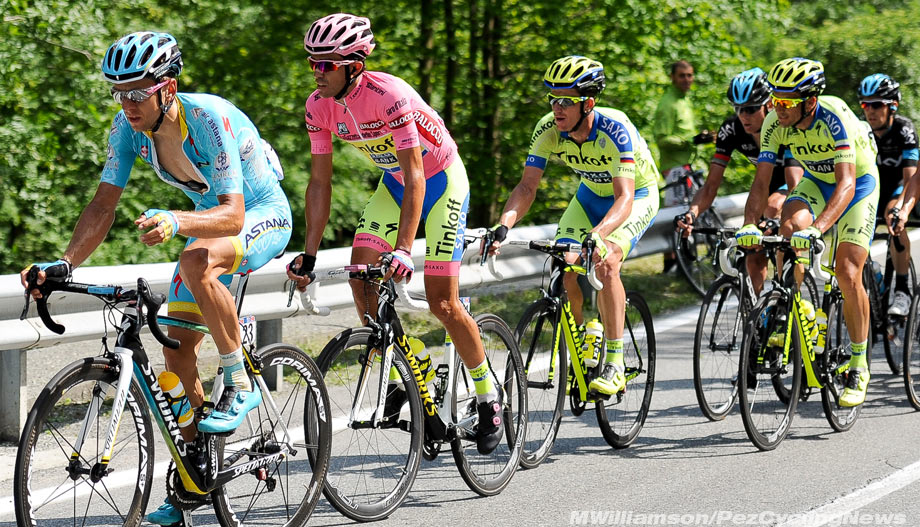 Alberto stretches his legs, he looks as comfortable as a man can at this stage of the game.

A gap, a Bardiani, a Nippo, two Katusha Russians chat, ones, twos . . 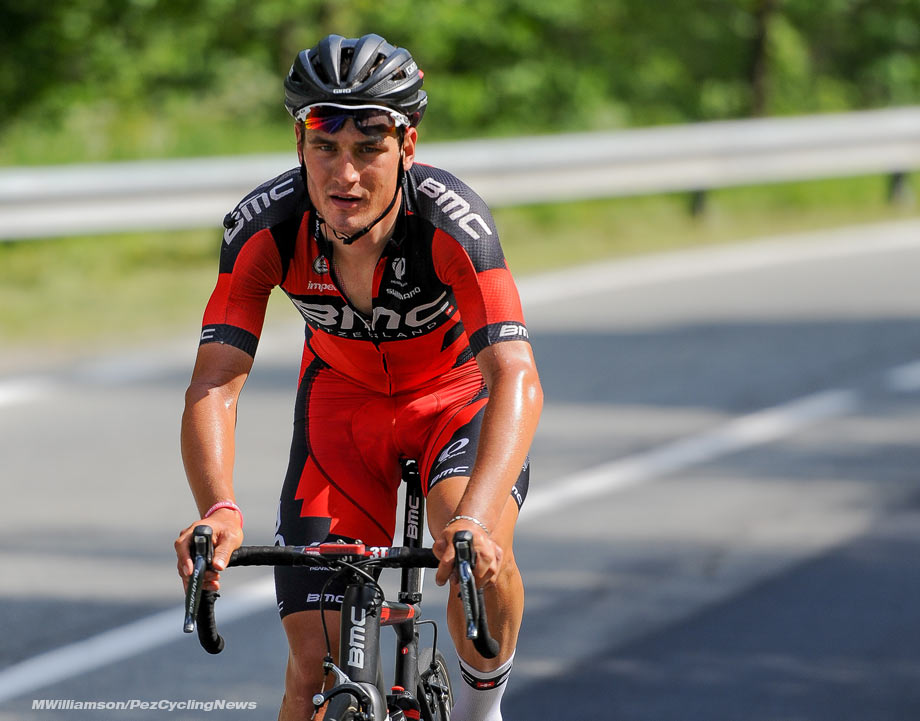 I recognise that dude, it’s a former charge of mine from the six days, world team time trial champion, Silvan Dillier; ‘hey ! Silvan !’ he’s wrecked but manages a smile and a little wave. 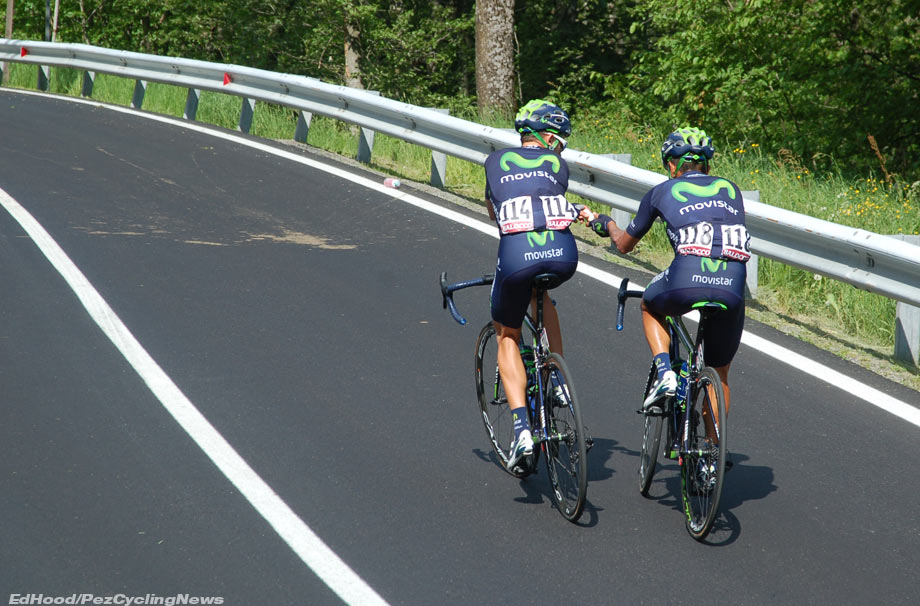 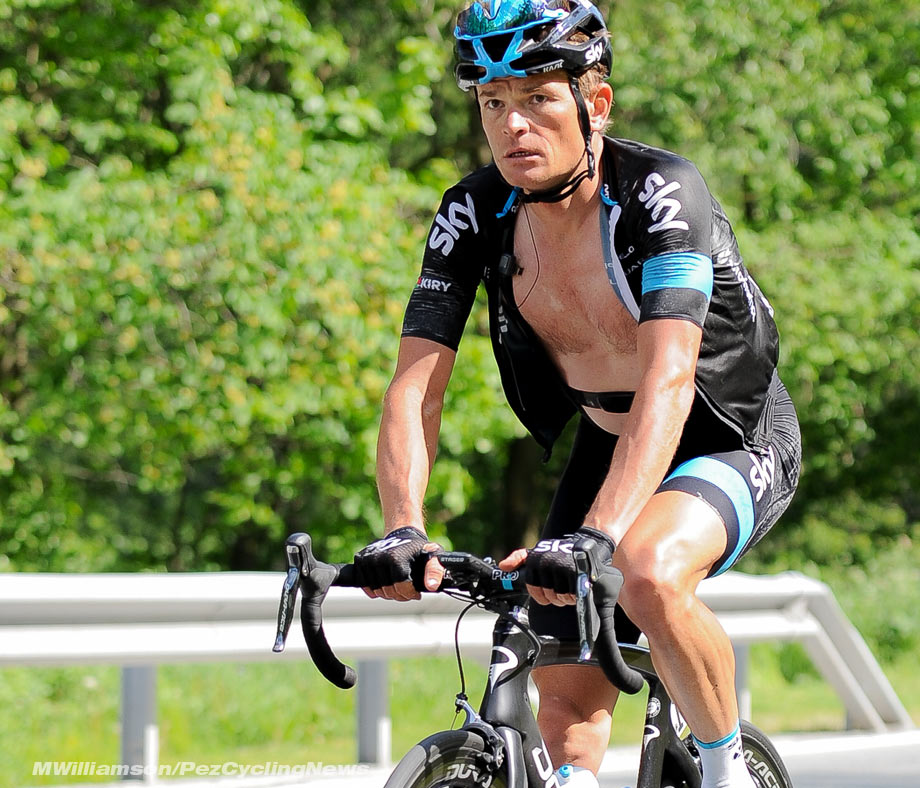 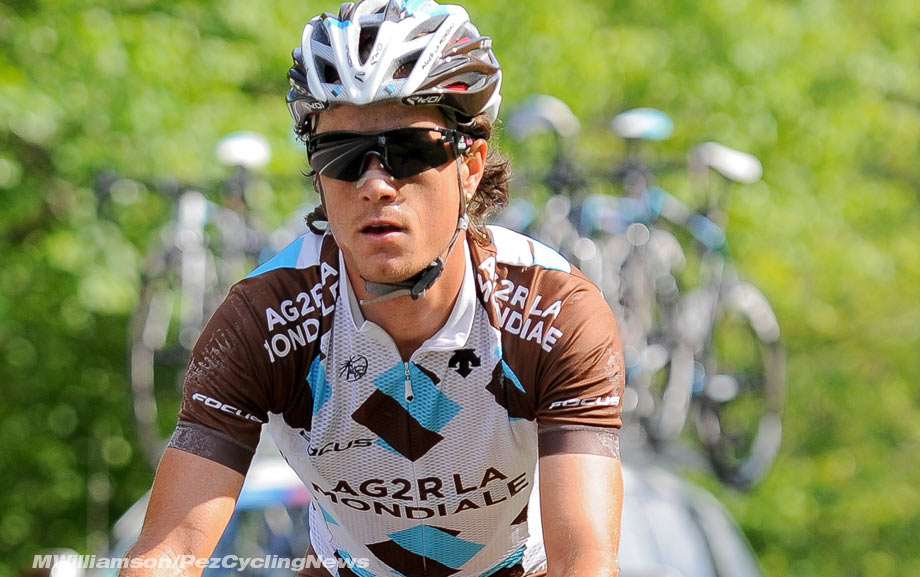 Betancur, I read somewhere he was a contender for this race . . .

More lone riders; De La Cruz, Geschke – then Gilbert leads a gruppo, the gaps are now huge and we can’t help but think that maybe this stage is just too much, too long, too hard – for most of the field it’s no race, just a grovel.

And at times like this; ‘we’re all in it together guys’ and names on jerseys matter less. 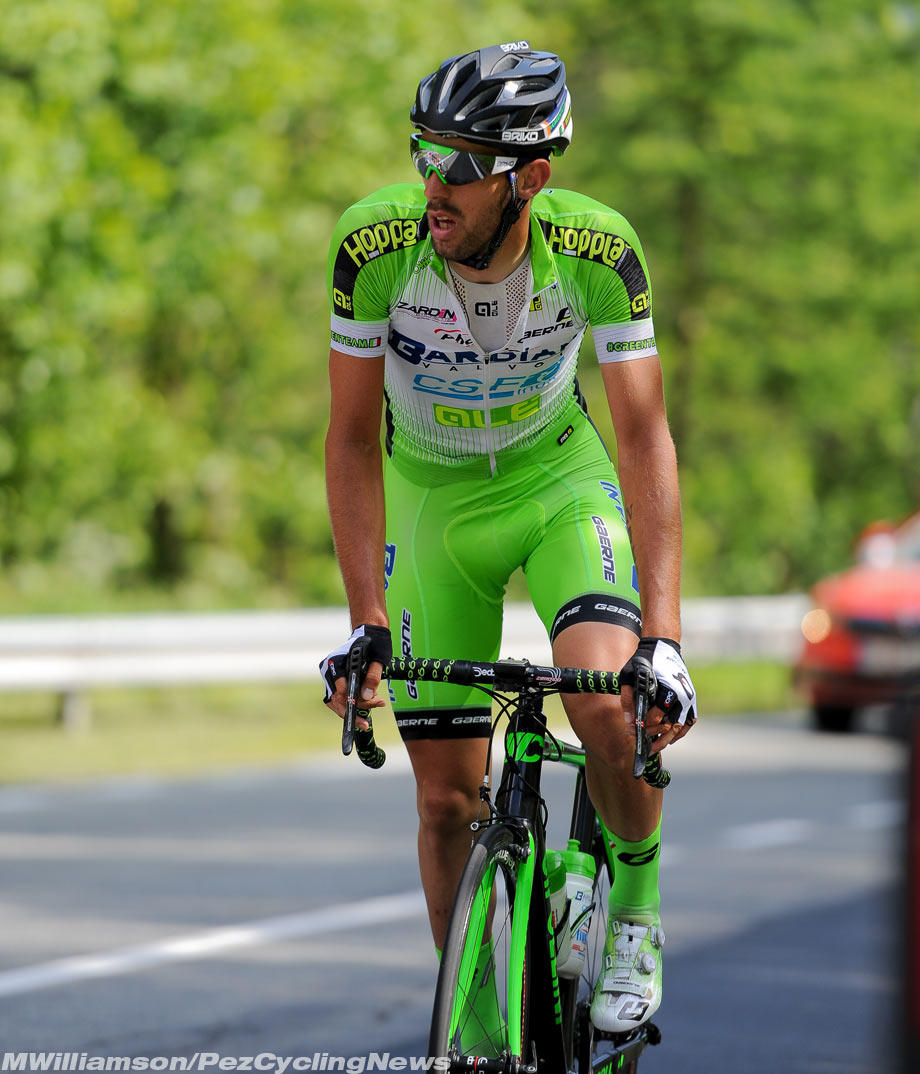 Stage winner, Boem rides like a zombie, it’s just instinct which keeps him pushing a pedal down when it comes up to meet him. 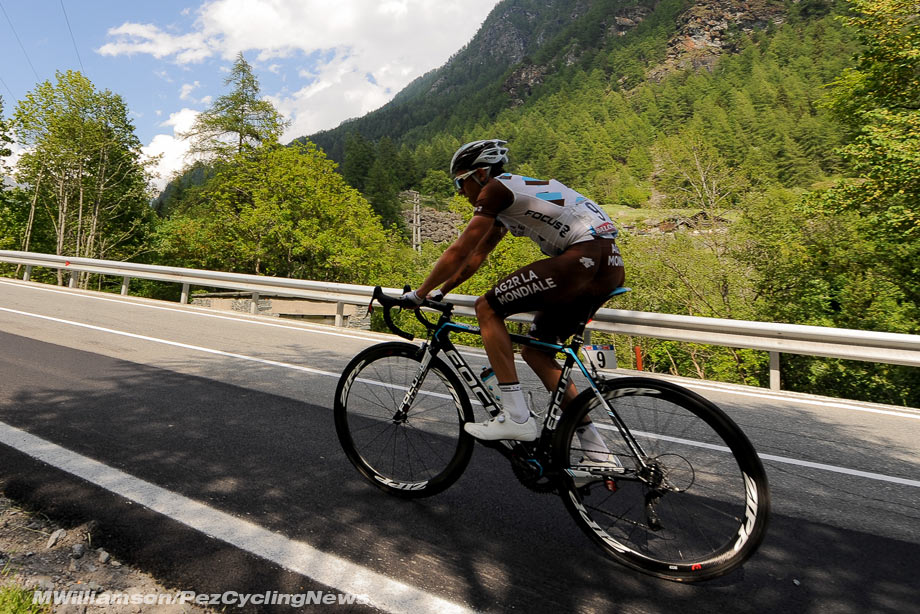 Nocentini is a man who’s worn the maillot jaune – today he’s another anonymous rider suffering in the wind and heat and gravity. 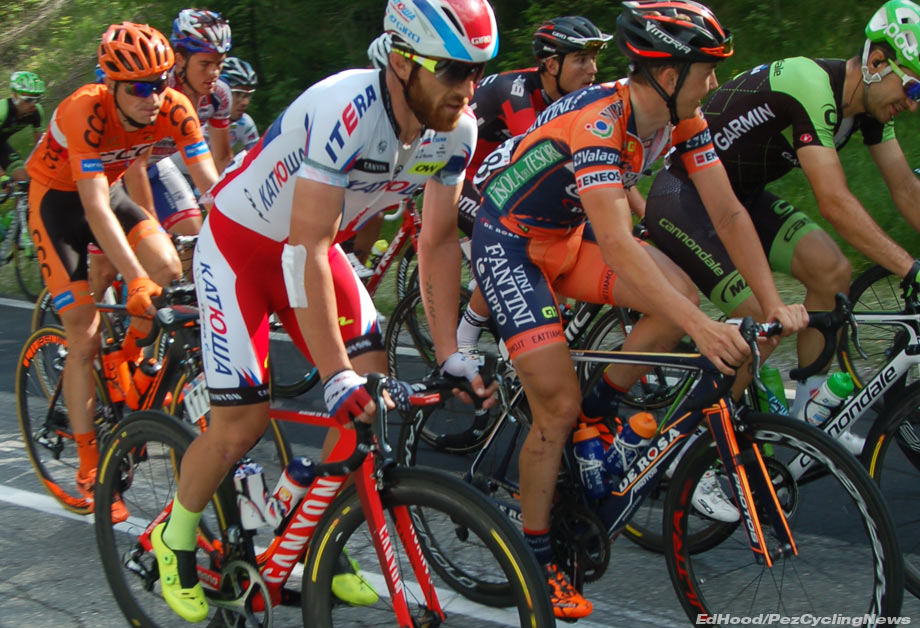 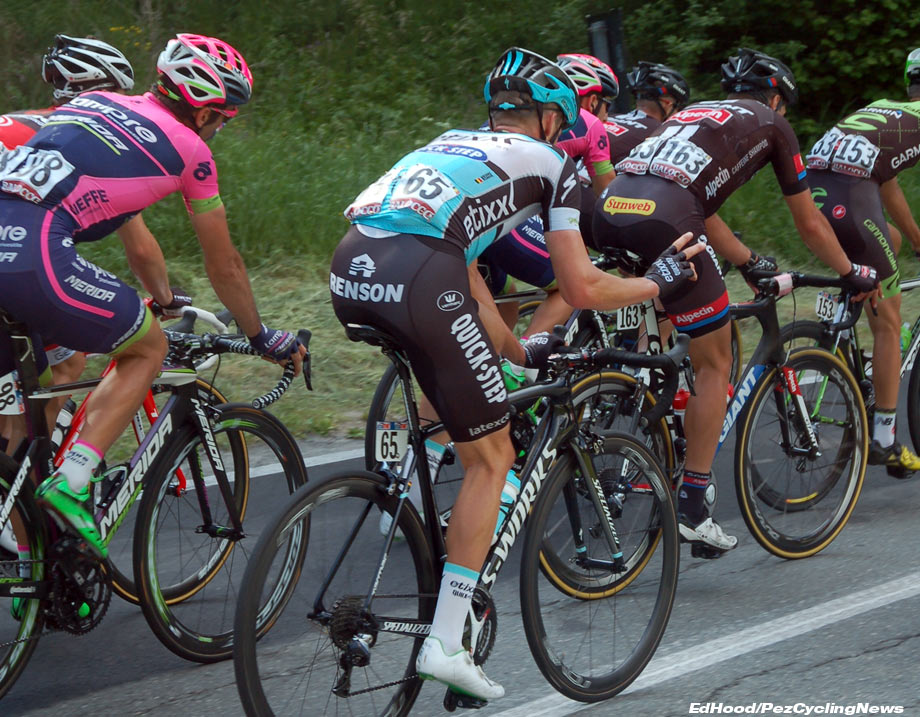 Another gruppo, Paolini goes through the motions and there’s Iljo Keisse “vai ! Iljo !” we shout, he manages a nod and a gesture, the King of the Kuipke is just another wasted rider on this endless drag.

There’s more banana action from Movistar; a lot of the guys are eating – no one wants hunger knock right now.

The last survivors struggle past, we hop the convoy, the news comes through – Aru wins, solo ! Why do we have the feeling he’ll also have taken enough time to go second on GC ? Confirmation comes through, Aru goes second on GC – what a surprise !

All that remains is for us to track the Sky car to the finish and the chaos they do so well on the Giro.

At least we had the pretty bell ringer to distract us before a nightmare of a wait to get to our hotel.

All that remains is for us to get up to our hotel, follow the Sky car and try and find our hotel, wi-fi, a hot shower, a pizza . . .