Race Report: The surprises of the 2015 Giro d’Italia continued in the final stage as Iljo Keisse won in Milan from Luke Durbridge in a two-man break. The pink jersey of Alberto Contador crossed the line safely in the bunch to seal his overall victory. Giro d’Italia done, Tour de France next.

For a change the final stage of a Grand Tour didn’t end in the usual sprint finish. Etixx – Quick-Step’s Iljo Keisse broke away with Luke Durbridge of Orica-GreenEDGE and the pair kept ahead of the baying hounds of the sprint, for the Belgian to take his biggest win on the road. Alberto Contador had his Tinkoff-Saxo team continually at his side for a safe passage to the last finish line in Milan and his last pink jersey.

The 2015 Giro d’Italia has come to an end. The race has been dominated by Alberto Contador, but you can’t say it has lacked excitement and has had us on the edge of our seats up to the last pedal stroke of Saturday’s stage to Sestriere. Again the Italian Grand Tour, along with la Vuelta a España, has proven that shorter stages can make for more spectacular racing.

Today’s final stage was from Turin to Milan, 178 kilometers of mostly flat roads. From Torino the course passes through Vercelli and Novara on its way to Milano. The riders hit the Milan circuit after 140.2 kilometers and then cross the finish line eight times with an intermediate sprint on the fourth lap. Mostly the stage is for show, but the points competition is still up for grabs. Giacomo Nizzolo (Trek) is leading with 159 points with Sacha Modolo (Lampre-Merida) second on 142, Sky’s Elia Viviani on 134 in third and Philippe Gilbert (BMC) on 128 in fourth. With 50 points on offer for the stage win, anything is possible. The finishing circuit is 5.3 kilometers long with good surface but there are tramlines close to the finish. 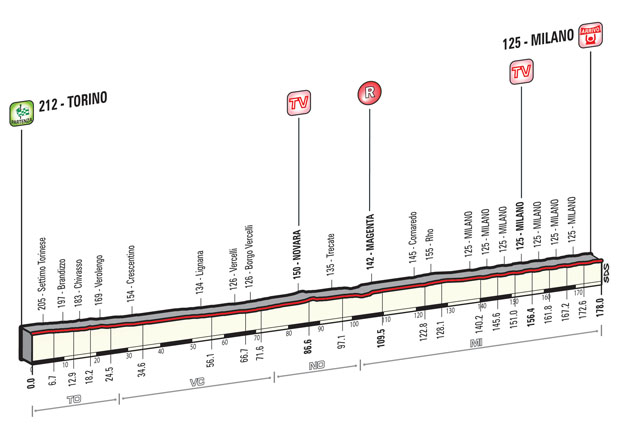 As usual with these stages, there was an easy start, with Tinkoff-Saxo team boss, Oleg Tinkov showing off his pink hair and opening a bottle of prosecco at the side of the team car. The first hour was ‘raced’ at 37.2kph. 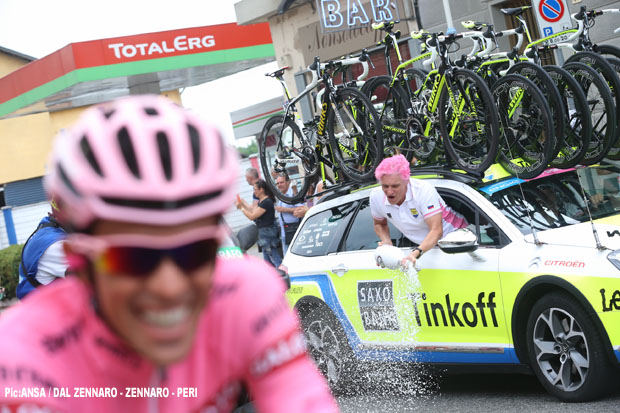 The peloton stayed together until 92.5 kilometers to go, when BMC put in an attack taking Lampre-Merida’s Max Richeze along for the ride. The BMC riders were: Philippe Gilbert, Marcus Burghardt and Silvan Dillier. In Novara Gilbert took the intermediate sprint ahead of Richeze. On paper the ex-World champion could take the points jersey and the intermediate sprints competition, depending on how many points he can get. After the sprint they sit up and wait for the bunch.

Tinkoff-Saxo sat on the front of the peloton, all the riders had pink handlebar tape, mitts and socks, plus Contador had pink details on his S-Works bike. Through the feed and everyone was happy. The ‘Break Killer’ Cheng Ji handed out most of his bottles to fans at the roadside. 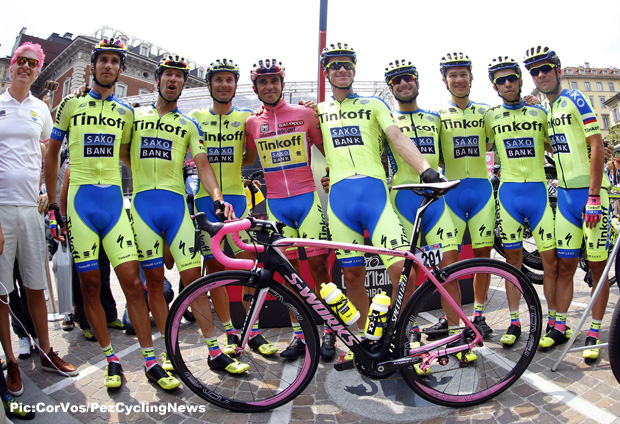 50 to go
Under the 50 kilometer to go sign and the Tinkoff-Saxo team were still on the front, but the speed had risen to 58kph for the third hour. The only rider missing from the final stage was Alessandro Petacchi who couldn’t finish stage 20 due to a fever. Will he be back next year? At 41, maybe not.

The beard himself, Luca Paolini, has a new helmet with a picture of the Giro trophy on the top.

The race passed the EXPO ’15 as it entered Milano and started the first lap with 37.1 kilometers to cover over 7 laps. The circuit was made up of tight bends with some narrow sections with road furniture, the final kilometer was wide and flat, but there are tram lines 150 meters before the line.

Tinkoff led trough at the end of lap 1, but many of the other teams had started to mass behind them. The attack came from Iljo Keisse (Etixx – Quick-Step) and Luke Durbridge (Orica-GreenEDGE) just in the last 30 kilometers; they took 20 seconds within a kilometer.

Tinkoff-Saxo were quite happy to let them go and as they passed through the finish, with 5 laps to go, they had over 30 seconds. Lampre-Merida sent a rider to the front to help the chase; it needed more teams to take an interest. 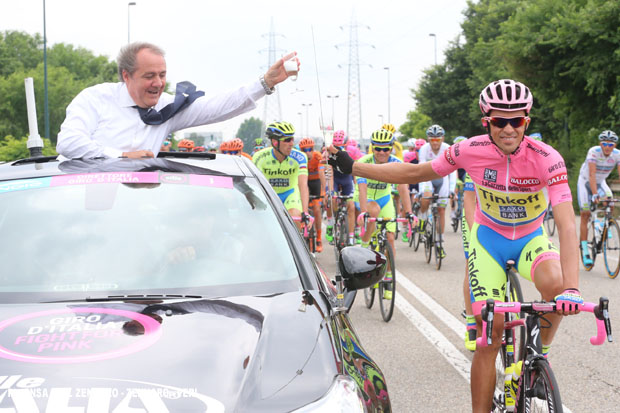 Sky decided it was time to lift the pace with 23 K’s to go by putting five men forward. At the intermediate sprint; Keisse took it from the leaders and Nizzolo was led perfectly to the line from the pack for 3rd.

A small tussle started amongst Nizzolo and the Lampre-Merida team, some pushing and a little bit of elbowing, followed by some finger pointing.

Sky had control for Viviani; the fighting between Trek and Lampre was to get on the end of the Sky train. Three laps to go and the lead was 31 seconds. There was a spate of punctures, most notable being Giant-Alpecin’s sprinter Mezgec. Next down was König.

The lead went up to nearly 1 minute as Keisse and Durbridge had two laps to go and 10 kilometers. More punctures, this time it was Gilbert and riders from Orica-GreenEDGE and IAM Cycling.

Patrick Gretsch (AG2R-La Mondiale) jumped as they entered the last three kilometers, but was caught. Durbridge was shouting at Keisse to come to the front as the bunch had them in sight, the cat and mouse stuff started, but they had the time. 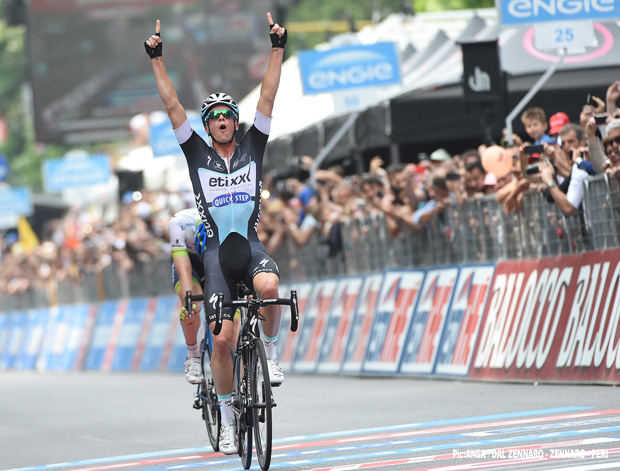 Keisse made his move and you could see he had the win in the cross hairs and took it with enough time to throw his hands in the air. The sprint for 3rd was a messy affair, but Trek’s Giacomo Nozzolo has sealed the red points jersey.

Alberto Contador crossed the line with both arms up and was then mobbed by the crowd. So the first part of Contador/Tinkov’s plan to win the Giro/Tour double has been successful, we only have just under a month to wait for the start of the French Grand Tour and part 2 of the plan.

The Maglia Rosa, Alberto Contador (Tinkoff-Saxo): “I thank the people of Italy for their affection. Everyone has been very special with me and I am very happy. During the 3 hard weeks of the Giro, everything imaginable has happened: I came here thinking about victory having prepared very carefully, but then I had my fall and a shoulder injury. There was the mythical climb of the Mortirolo, but then yesterday on the Colle delle Finestre I had bad legs. It has been a beautiful Giro, and a very special experience for me. I don’t know how long it will take to recover. I’m tired, and I know it will take time. It has been an emotional Giro for me. I’ve said it will be my last, but you never know. As we say in Spanish, never say never.” 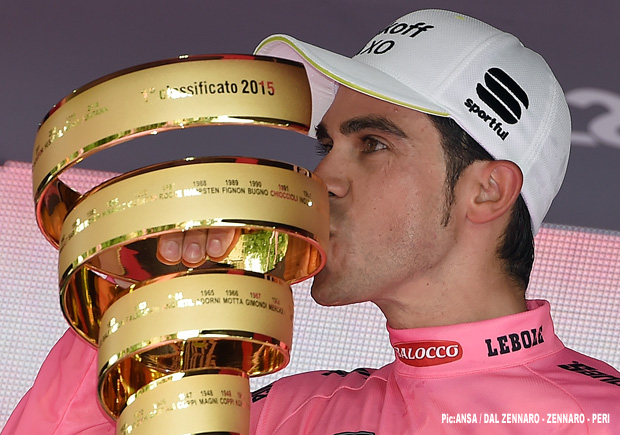 Next up the Tour!

The stage winner, Iljo Keisse (Etixx – Quick-Step): “Before the race, we had a sort of plan for me and Saba [Fabio Sabatini] to try and do something on the final bend, because I’m a track rider so I corner pretty well. But then I saw that there was some hesitation at the start of the circuit, so I attacked. I had a pretty good partner in crime in Luke Durbridge. I did my last pull at 2.5km. I heard we had 30 seconds so I knew we’d make it. I put pressure on him by saying I wasn’t going to work, and I’ve seen how Cavendish does it so I used that experience today. It’s been a very different Giro this year for the team. We haven’t won a stage, after being very successful in the previous couple of years, so this win is very important. It’s my best ever victory, and I’m so, so happy.”