The Queen Stage in the Dolomites awaits

Alpago (Farra), 21 May 2016 – Good morning from Stage 14 of the Giro d’Italia, 210km from Alpago (Farra) to Corvara (Alta Badia). This Queen Stage of the 99th Giro will cross no less than six Dolomites passes before the finish in Corvara, Alta Badia, in the middle of the UNESCO world heritage landscape. 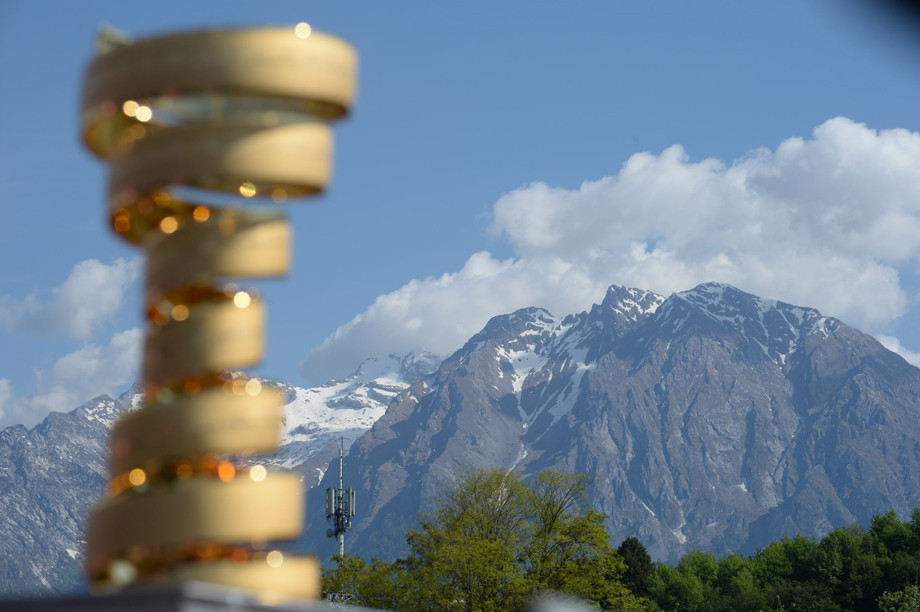 POINTS AND TIME BONUSES
During the stage, 122 King of the Mountains points are up for grabs, the maximum amount in a single stage of this year’s Giro, as well as time bonuses of 13 seconds. A maximum possible 31 points are available for the points classification. 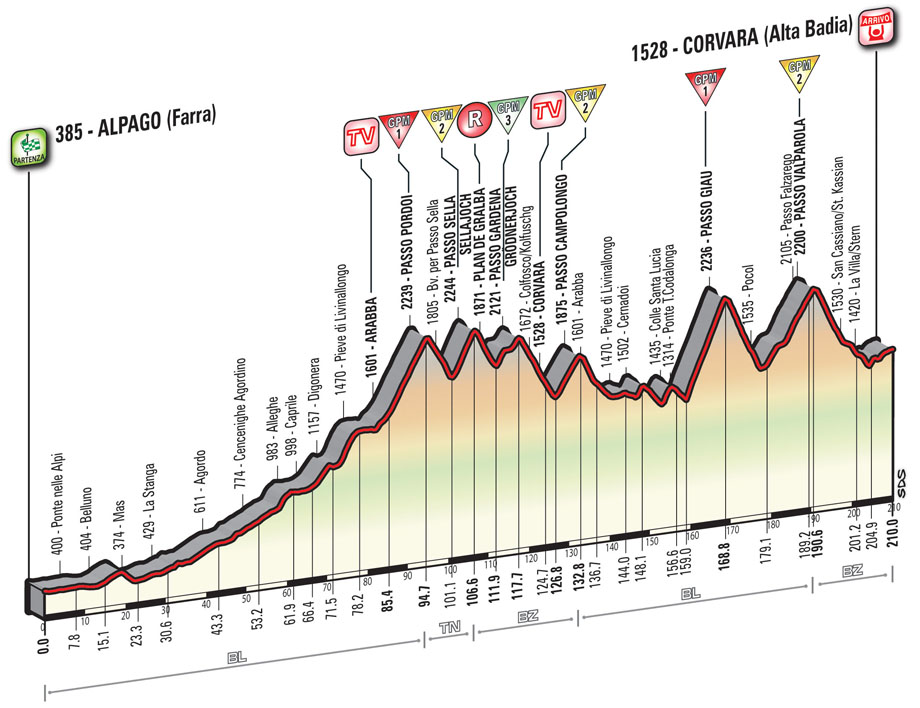 Route
Over the last 150km of this Queen Stage across the Dolomites, there are six passes to be climbed, for a total rise and drop of 4,700m (out of 5,400m). The route runs across the Val Cordevole along well-surfaced roads, all the way to Arabba. Here, the route clears Passo Pordoi, followed by Passo Sella and Passo Gardena (with not even a single flat metre in between), and heads for the first pass over the finish line in Corvara (intermediate sprint). 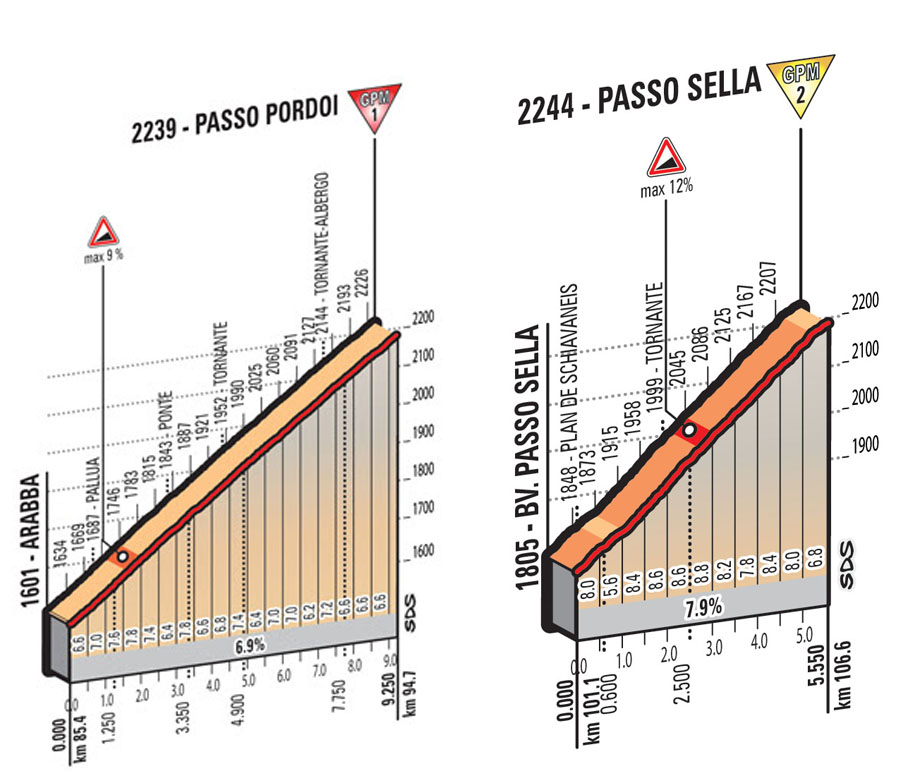 The road then climbs up Passo Campolongo, Passo Giau (the harshest climb of the stage, with an average 9% gradient, and peaks of more than 10-12% over the first kilometres) and Passo Valparola, which leads to the final 5km. All climbs and descents feature many hairpins and a few narrow urban crossings. 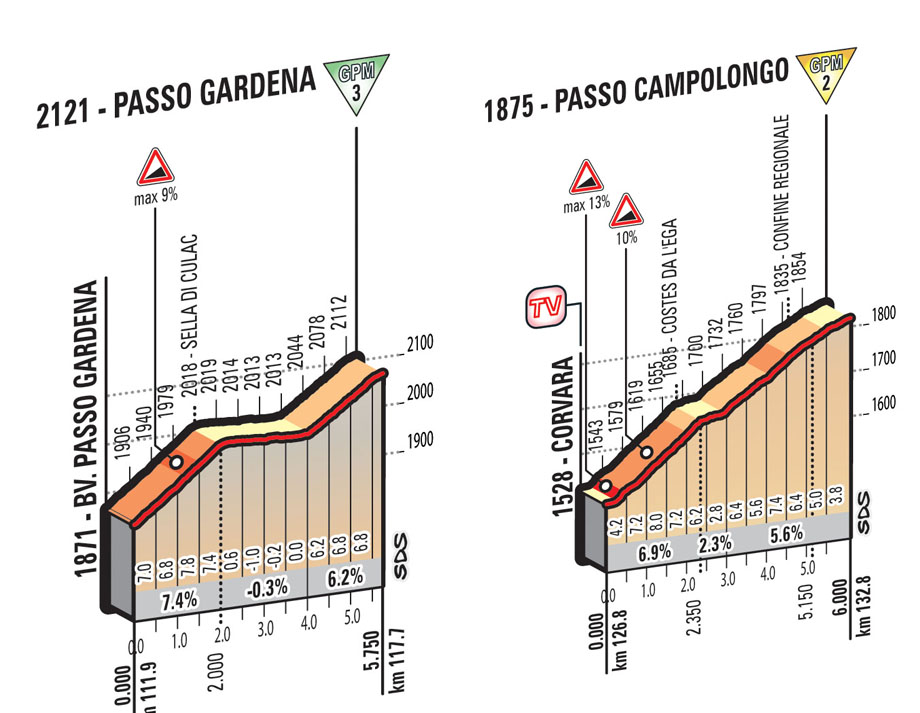 Final kms
The last 5km run mostly uphill. The route clears Muro del Gatto (360m, with gradients ranging from 13 to 19%), and then drops down into the trunk road leading to Corvara, still climbing slightly (average slope: 2-3%). The last bend is 150m from the finish line and the home stretch, on a 6m wide asphalt road, has a mild uphill gradient. 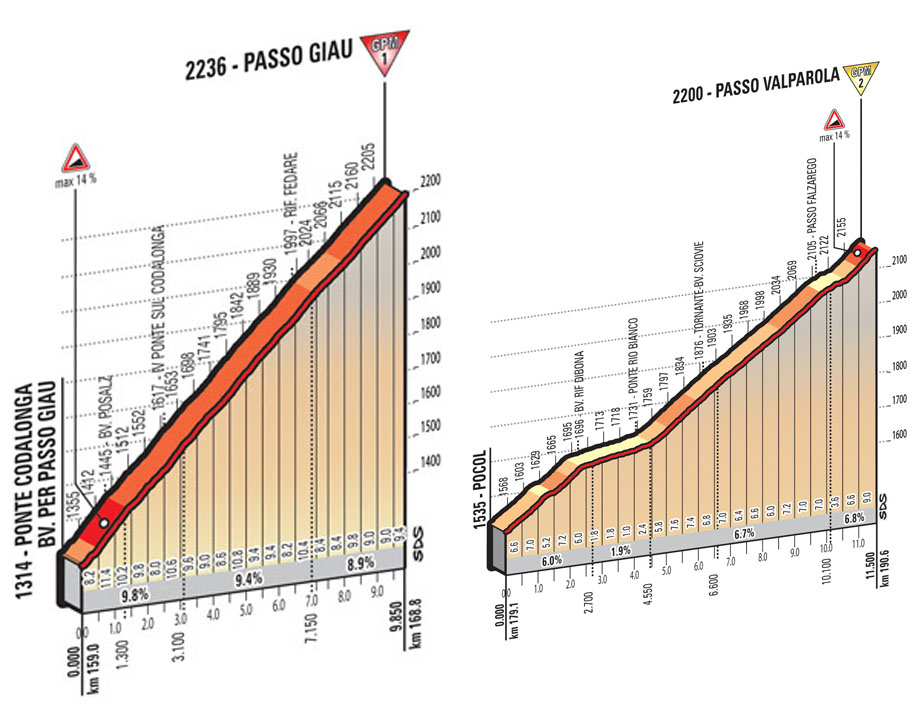 POINTS OF INTEREST
FARRA D’ALPAGO – km 0
The stage starts from Farra d’Alpago, on the north-eastern shore of the Lake of Santa Croce. The area is home to many sports, in the woods and the mountains; while Poiatte, on the lake shore, is ideal for sailing and windsurfing. The area of Alpago, in the Prealps around Belluno, at the foot of the Cansiglio plateau has already been featured in the route of the Corsa Rosa.

PONTE NELLE ALPI – km 8 and BELLUNO – km 15
The route first cuts across Ponte nelle Alpi, a picturesque town on the River Piave. Next is Belluno, the provincial capital, rising on a rocky spur within the valley. The influence of Venetian architecture is reflected on the buildings in the old town centre, such as the cathedral, Palazzo dei Rettori and the clock tower.

AGORDO – km 43
The route runs past Mas (a hamlet in Sedico) and enters the “Parco Nazionale delle Dolomiti Bellunesi” national park in Agordo, a peaceful holiday resort. The town was previously major iron mining centre, and is currently the seat of a Mining Institute of secondary education.

ALLEGHE – km 62
The route starts to climb in Cencenighe Agordino, in a landscape dominated by Mount Civetta (3,220 m). Alleghe, next on the course, is a charming holiday resort and an excellent venue for summer and winter sports. The extraordinary vertical face of Mount Civetta must be seen!

ARABBA (intermediate sprint) – km 85
This and other stretches of the stage run on the ss. 48 (the so-called Große Dolomitenstraße), the road that connects Bolzano to Dobbiaco, as proposed by Theodor Christomannos (1854-1911), a pioneer in Alpine tourism who is considered the “inventor” of the Costalunga, Pordoi and Falzarego climbs.

PASSO PORDOI (KOM) – km 95
First-category and first KOM of the stage, located between the Sella Group to the north and the Marmolada to the south, Passo Pordoi is not new to the Corsa Rosa, as demonstrated by the memorial to the “Campionissimo” Fausto Coppi.

PASSO SELLA (KOM) – km 107
The route winds its way in a wonderful landscape, entering the province of Trento to tackle the Passo Sella 2nd category climb. Running clockwise around the Sella massif, we can catch sight of the Langkofel.

ARABBA – km 137
The route takes another pass through Arabba, closing the first loop around the Sella massif that skiing and cycling enthusiasts call “Sella Ronda”.

PIEVE DI LIVINALLONGO – km 144
The scene of some of WWI’s most fierce events of, including battles for the Col di Lana summit.

PASSO GIAU (KOM) – km 169
A spectacular, stunning landscape: the route winds its way among large meadows and lush forests, dominated by the Nuvolau and Averau mountaintops. Along the climb and on top of the pass, one glance can capture the Marmolada, the Sella Group, the Tofane, the Cristallo massif and all the wonderful natural sights of the Dolomites.

POCOL – km 179
This tiny hamlet in Cortina d’Ampezzo is home to a military memorial to the fallen of WWI. Cortina d’Ampezzo is nicknamed the “queen of the Dolomites” and is the largest and most famous of the 18 municipalities of Ladinia. A renowned winter and summer tourist resort, it hosted the Winter Olympics in 1956. Completely surrounded by the Ampezzo Dolomites, Cortina has a unique beauty. The most famous mountains include Tofane, Pomagagnon, Cristallo, Faloria, Sorapiss, Becco del Mezzodì, Croda da Lago and Nuvolau.

PASSO FALZAREGO – km 189
A “historically famous” mountain pass offering stunning views of the mountains around Cortina d’Ampezzo. The name Falzarego comes from Latin, “fàlza régo” (“false king”), a name that –legend has it – refers to the ruler of the Kingdom of Fanes, who stripped the rightful holder of his throne and was turned into stone for having deceived his people.

PASSO VALPAROLA (KOM) – km 191
The view over the Dolomites ranges from to Sassongher, through Gardenaccia and to the Peitlerkofel.

SAN CASSIANO – km 201
The town is a major tourist resort in the municipal district of Badia, a busy ski resort and tourism destination in both winter and summer.

LA VILLA/STERN – km 205
La Villa, next on the route at the end of the descent, is the birthplace of Maria Canins, a successful cross-country skier and road rider – she twice won the Tour de France (1985 and 1986), and finished second in the following three editions. Here, the route takes in a first-ever pass on “Muro del Gatto”, a short yet nasty climb).

CORVARA – km 210
The finish of this Queen Stage across the Dolomites is set in Corvara, in the same place as the Maratona dles Dolomites; the Granfondo is celebrating its 30th anniversary this year.
Corvara lies in a large, splendid valley in the upper Val Badia, at the foot of the majestic Sella group. The pristine natural landscape is dotted with verdant meadows in gentle rolling hills. The imposing peaks of the Dolomites, such as Sassongher, surround and protect the valley.
The town hosts its sixth Giro d’Italia stage finish this year. In 1989, victory went to Flavio Giupponi (the finish was set in Colfosco); in 1992 to Franco Vona; in 1993, the city hosted two consecutive stage finishes, with victory going to Moreno Argentin and Claudio Chiappucci. Finally, in 2002, coming in first was Julio Perez Cuapio. 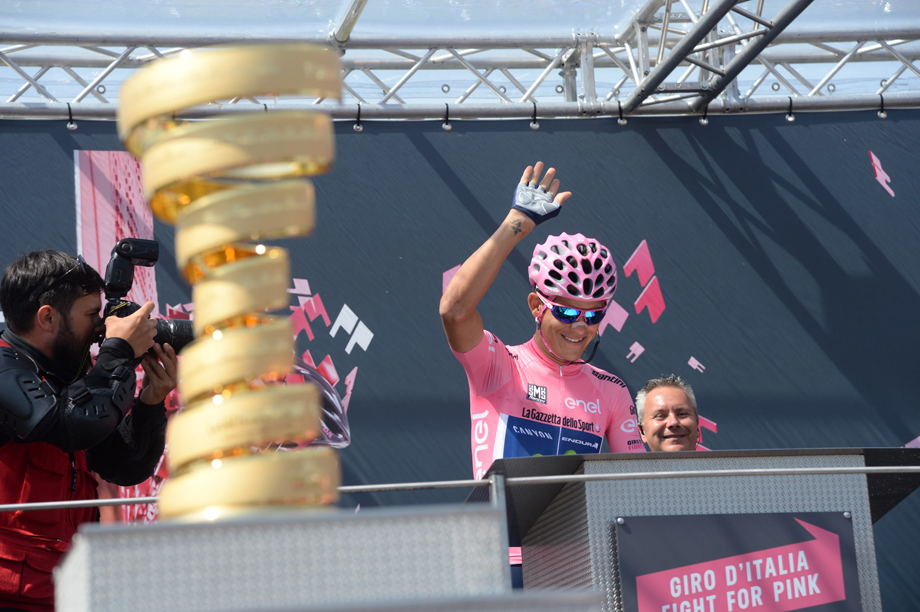 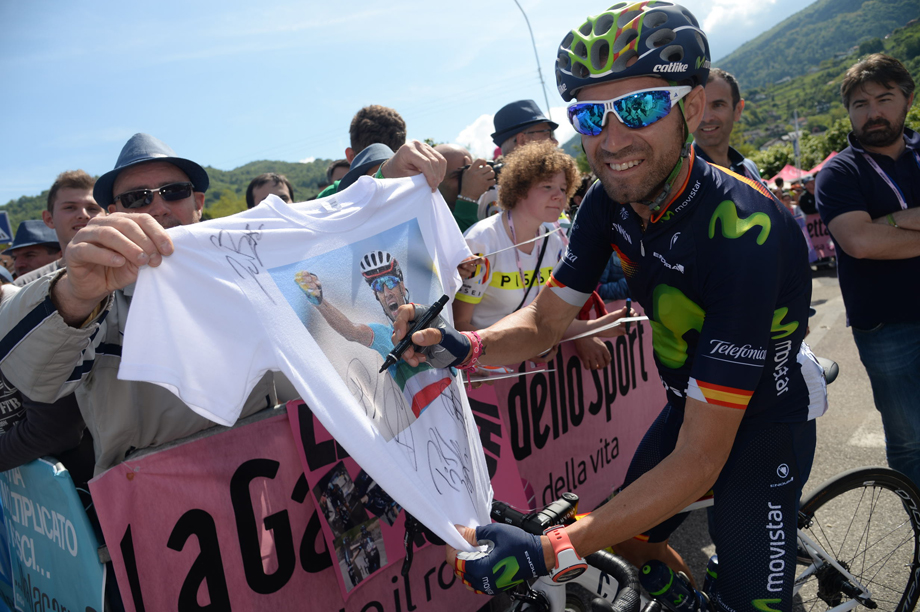 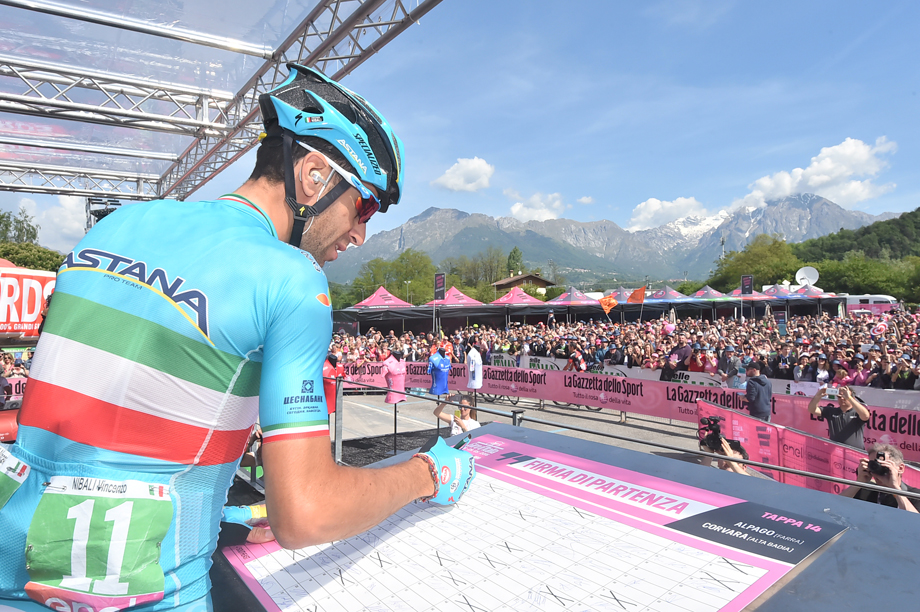 GIRO D’ITALIA – RIDE GREEN
During yesterday’s stage, over 2.8 metric tons of rubbish were collected, 82% of which will be recycled. Almost 28 tons of rubbish has been recycled so far at the Giro.