Race Report: André Greipel won his second Giro d’Italia stage in three days and gave the Lotto Soudal team its third stage in a row. The break of the day was never going to succeed and in the end Stefan Küng was pulled in with 7K’s to go and the sprint unleashed the power of Greipel for another win.

On a wet day in central Italy a break of six riders escaped after the first climb of the day, but their move was doomed from the start. After the second and last climb, the 22 year-old BMC rider Stefan Küng decided it was time for him to put his time trialling ability to good use and head off on his own. Seven kilometers from the finish in Foligno the dream was over for the Swiss rider and the lead-out trains put their men on the front. Lotto Soudal had the upper hand until the last meters were they were out gunned by other teams, but Greipel had the timing and the power to win by a length from Giacomo Nizzolo (Trek-Segafredo) and Sacha Modolo (Lampre-Merida). 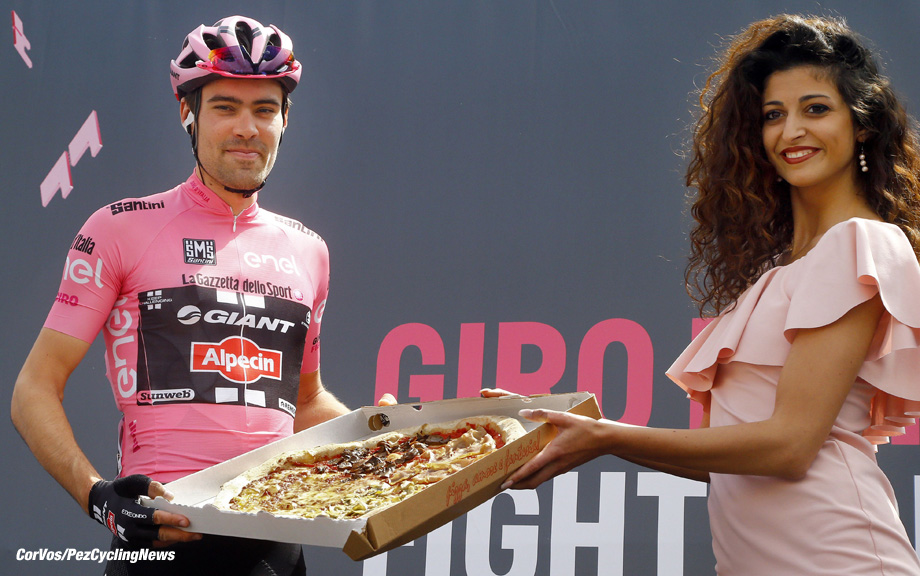 Did Tom eat the pizza?

Stage 7
The first climb started just 11km after the Sulmona (Le Svolte di Popoli, Cat 2), this is followed by nearly 200km on wide and mostly straight roads. The second climb (Valico della Somma, Cat 4) comes 41kms from the finish in Foligno. The final part of the route descends all the way to the final kilometers. The final kilometers are quite uncomplicated, up to Two kilometers out there is one right-hand bend quickly followed by two left-hand bends that lead into the home stretch with 1,300 meters to go. There is just one last, gentle bend 500 meters before the finish line, which is on a 160 meters long and 7 meter wide asphalt straight. 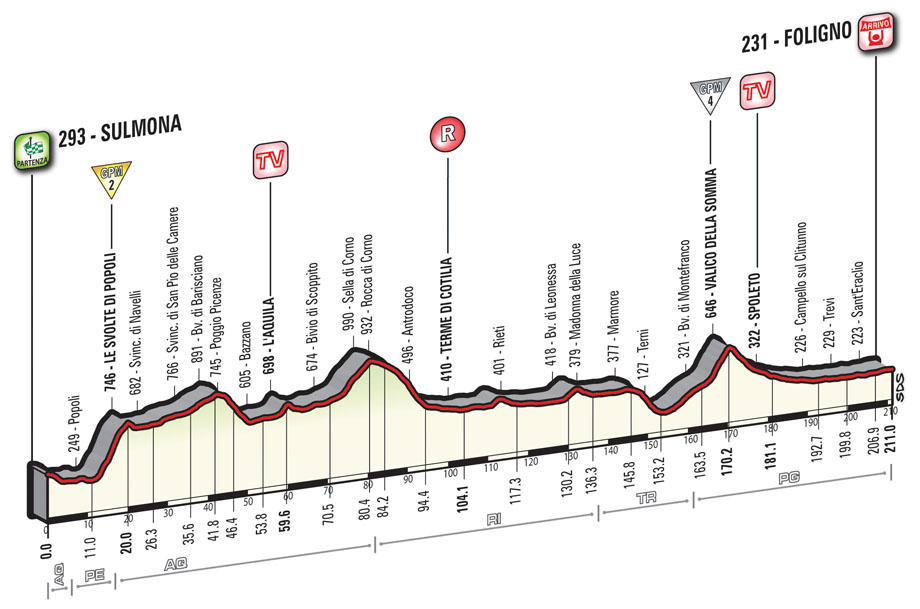 The Start in Sulmona
From the start the Nippo-Vini Fantini team were on the attack to defend the KOM jersey of Damiano Cunego, but the first escape included: Patrick Grestch (AG2R-La Mondiale), Stefan Küng (BMC) and Jay McCarthy (Tinkoff) and so Nippo had to chase. On the first climb of the day, le Svolte di Popoli, the lead was around 1 minute for the three riders. At the summit Küng took the points ahead of McCarthy and Gretsch, while behind; Cunego attacked from the bunch but was beaten to the top by yesterday’s stage winner Tim Wellens (Lotto Soudal) who is looking to take the mountains jersey for himself.

The early climb split the race into many groups and with the escape being caught, there was a lead group of around 60 with the sprinters chasing at over 2 minute.

Stefan Küng makes another break attempt and was joined by Axel Domont (AG2R-La Mondiale), Giolui Ciccone (Bardiani-CSF), Stefan Denifl (IAM Cycling), Ilya Koshevoy (Lampre-Merida) and Daniel Martinez (Wilier-Southeast) and after 100 kilometers the six riders had a 3 minute lead and the peloton had reformed as all the groups came back together. 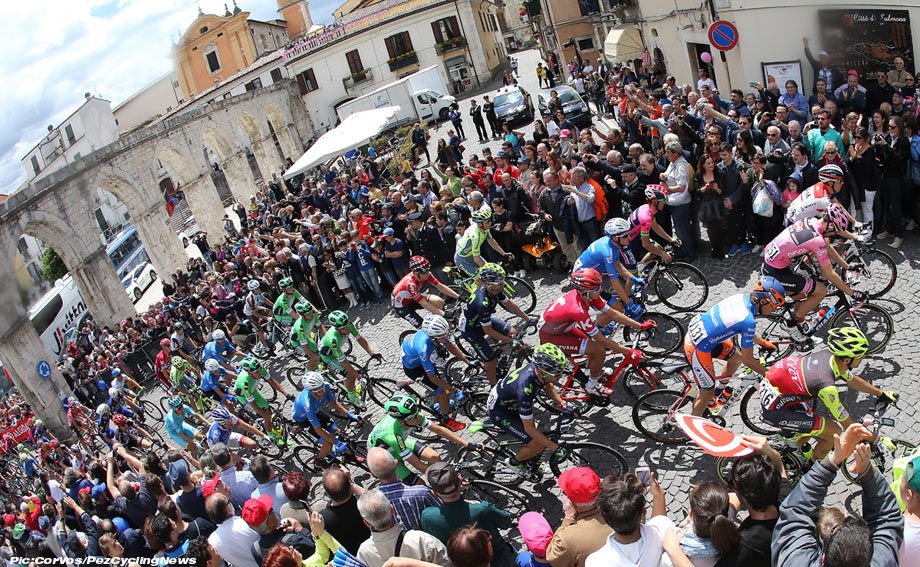 The town of Sulmona was out to see the start

100K to Go
Through the feed-zone and the gap had stabilized at 3:05, Lotto Soudal had two men on the front of the peloton, behind them was FDJ, so two of the sprinter teams must have been thinking of the finish for their leaders; Greipel and Dèmare, but no sign of Etixx – Quick-Step for Kittel.

Movistar’s Javier Moreno hit the ground hard and had to be taken to hospital in an ambulance with around 80 kilometers to go. The race doctor confirmed that the Spaniard has a fractured collarbone.

As the race headed toward the town of Terni and its picturesque steel works, the sun came out to dry the roads from the earlier rain. The lead for the six up front had dropped to 2 minutes, but it was two early for the break to be caught, so the Lotto Soudal boys were holding them at a nice, catchable distance.

50K Out
At the case of the second climb of the day, Cat 4 Valicio della Somma, the lead was down to 1:47 and Lotto Soudal were still powering the peloton with FDJ in-line behind them, but other teams were starting to move forward to look after their leaders. Movistar, Astana and Tinkoff jerseys were seen at the front for the first time. Nippo-Vini Fantini and Dimension Data were also on the move.

Nippo sent a rider off the front with Cunego on his wheel with the hope that the ‘Little Prince’ would take some points and save his blue jersey from the grasp of Tim Wellens for another day. At the rear of the main bunch, Marcel Kittel was gritting his teeth to stay in contention. 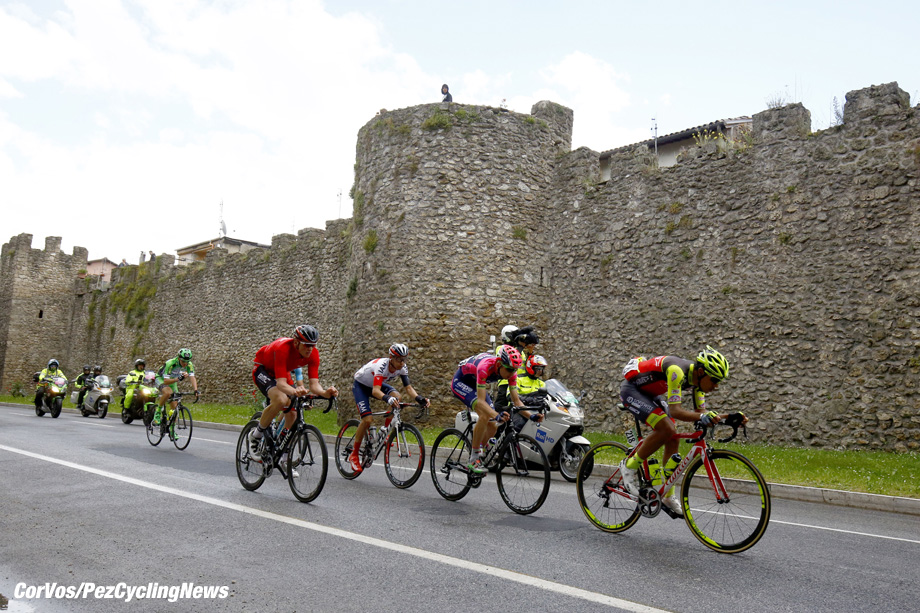 Valicio della Somma
Giolui Ciccone (Bardiani-CSF) was first to jump, but Daniel Martinez (Wilier-Southeast) was glued to his wheel and got the better of Ciccone at the summit, the other four let them fight it out. Cunego was next over the line in 7th at 40 seconds, which is not good enough to save losing the KOM jersey and it will pass to Wellens. The bunch were at 1:20 and closing. Kittel had been distanced on the climb, but the red jersey had a few of his Etixx – Quick-Step teammates with him, so he should make it back to the peloton, although the Cannondale team were pushing the pace up.

BMC’s Stefan Küng has escaped the others in the break on the descent, he took the intermediate sprint in Spoleto and was not waiting for anyone to come up from behind. Lotto Soudal had infiltrated the Cannondale green train on the front of the peloton and they soon caught the remnants of the break… except Küng who had nearly a minutes advantage. Kittel eventually made it back to the bunch. 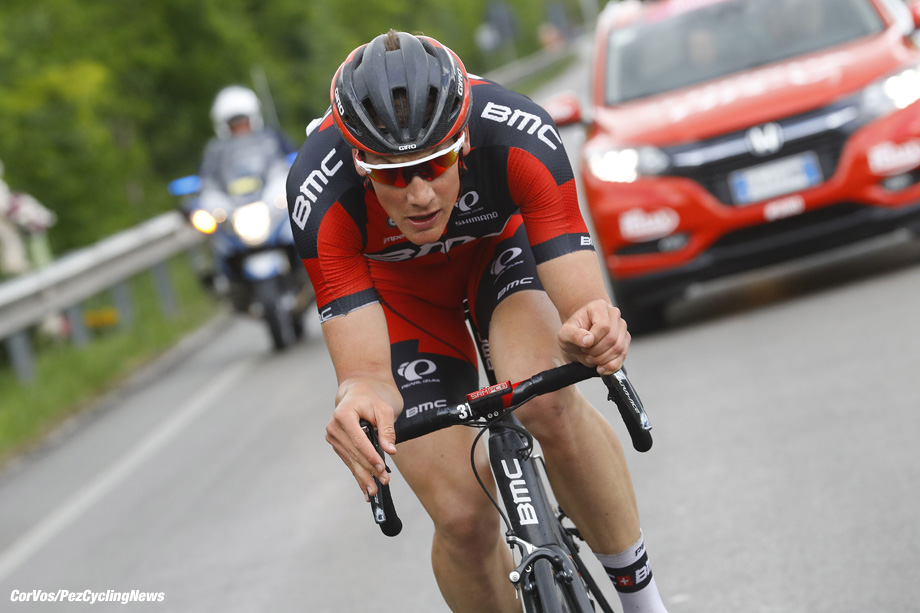 With 20 kilometers to go, Küng only had 27 seconds on a flying peloton. Cannondale moved off the front and the speed dropped as Küng had 19 seconds 15K’s out as just about every team had someone on the front on the wide road past the historic town of Trevi.

The Finalé
With 10 kilometers left to race Küng had 10 seconds in hand, but the 22 year-old was not going to stay out for much longer. At the 7 kilometer mark the bold Swiss rider was caught and Lotto Soudal, IAM Cycling and Trek-Segafredo took control of the lead-out. Disaster at the back as Marcel Kittel needed a bike change ending his hopes for the day.

Adam Hansen was the Lotto Soudal pilot fish for a long time through the twisting urban run in through Foligno, but 1,7 out there was a deluge of Lampre-Merida riders fighting for prime position with FDJ close at hand. Orica-GreenEDGE were next to push through, but André Greipel still had one rider on the front to guide him to the final meters.

Onto the finishing straight and the big German was perfectly placed to unleash his power, but Orica came round pushing Greipel back five places. No problem for the ‘Gorilla’ as he took the wheel of Lampre-Merida’s Sacha Modolo on his left which took him back to the front for his teams third stage victory in a row. 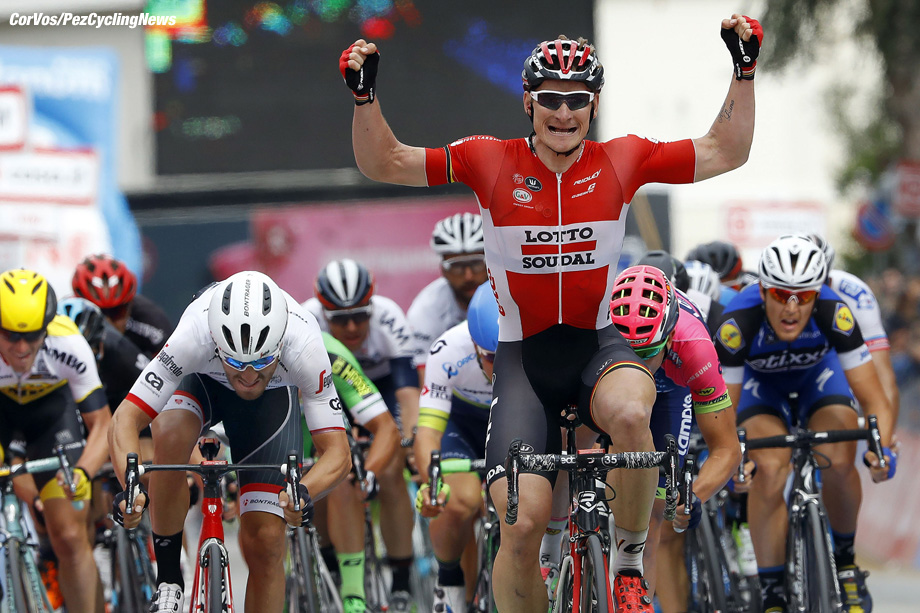 Another GT stage win for Greipel

André Greipel said after his second stage win: “It was tough all day with a strong breakaway that was hard to catch. My team did an amazing job. The chase had to be a serious one. Before the sprint, we hit the front early. I was happy to find my way to another win. The finish was nervous. If we were playing football we’d say we’ve scored a hat trick with three consecutive stage wins. We’re very happy.”

The overall situation will stay the same as Tom Dumoulin (Giant-Alpecin) finished in the bunch. It was a very good day for the Lotto Soudal team as André Greipel took the red points jersey from Marcel Kittel and Tim Wellens is now King of the Mountains.

Keep it PEZ for all the week end Giro news and roadside from Italy.