Race Report: Stage 6 was a day for a break to succeed, but it wasn’t the original escape who spawned the win for Belgian Tim Wellens on the summit of Roccaraso. Wellens crossed to the leaders and then launched his winning move on the last climb of the day. The overall lead hasn’t changed much, but Vincenzo Nibali did not look the race favorite he was billed as.

The Lotto Soudal team sent Wellens and Ligthart off after the original split, they caught the leaders, worked with them and then catapulted Wellens off up the final climb for a well deserved first Grand Tour win. Behind; Astana had a plan for Fulgsang to go up the road to be joined by Vincenzo Nibali, it failed and the Italian lost time on the race leader Tom Dumoulin.

Stage 6 Course
The first summit finish comes after a short yet full mountain stage of 157 kilometers. After the first 20km on flat roads, the route starts to climb along easy to mild gradients for almost 40km, including a deceptive false-flat drag before the ascent. After the Castel di Sangro intermediate sprint, the route takes in the final climb leading to the finish. 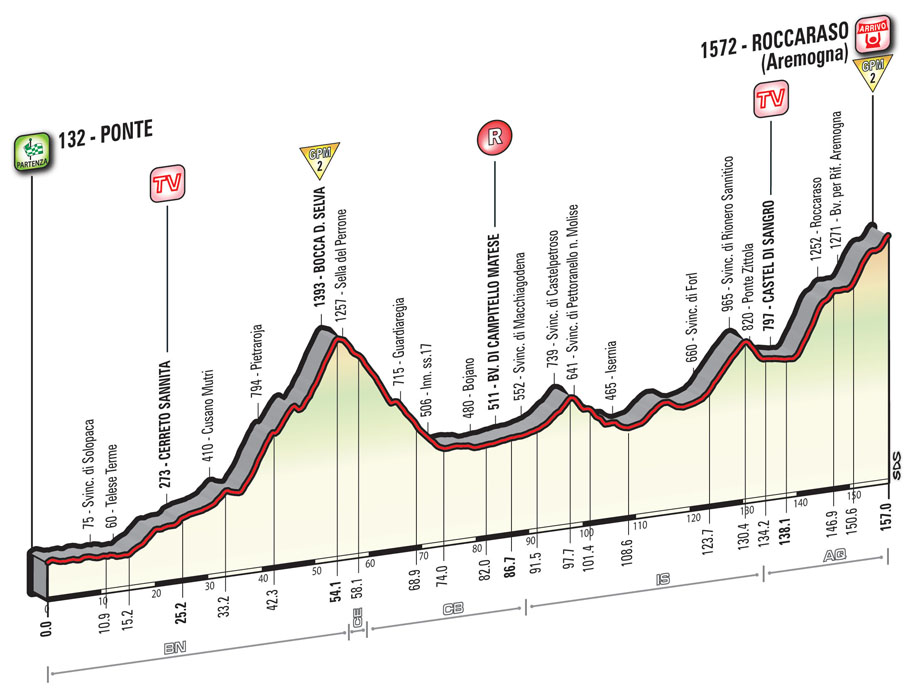 The final climb is 17km long, with an average 4.8% gradient. The first part is quite steep, with a short 12% stretch, followed by a deceptively false-flat drag (across the centre of Roccaraso). Seven kilometers before the finish, the route starts to climb again with variable slopes ranging from 4% to 7%. The final kilometer has a 7% gradient. The home stretch, running entirely uphill, is 120 meters long. 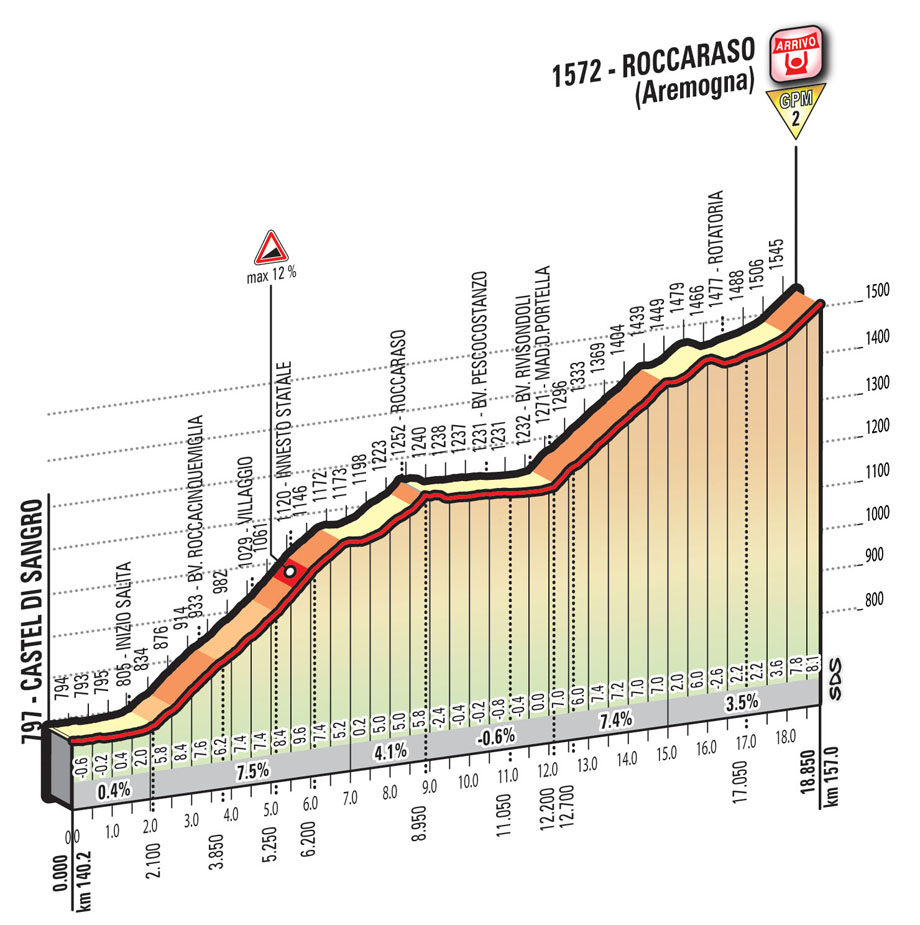 The Start
It was raining as the riders signed on in Ponte, but the forecast was for a dry stage, but cold and windy.

After a few attempts, three riders made the first break, it included Alexander Kolobnev (Gazprom-RusVelo), Alessandro Bisolti (Nippo-Vini Fantini) and Eugert Zhupa (Wilier-Southeast), with 130 kilometers to go they had 4:35 on a disinterested peloton. At the first sprint in Cerreto Sannita; Kolobnev took the points. Next up was the Cat 2 climb of the Bocca della Selva with an altitude of 1393 meters, it summits after 54 kilometers of racing.

Bocca della Selva
Due to the TV helicopter not being able to fly, there was not much information except that the lead had gone to 7 minutes and Giant-Alpecin were in control of the main bunch. Bisolti took the KOM points at the front as Movistar moved forward to take over the lead work in the peloton for Alejandro Valverde.

The Spanish team lifted the pace and the lead fell quickly to 1:10 with 87 kilometers remaining. The fast descent was hampered by a downpour, causing the riders to slow on the slippy corners. At one point Zhupa was on his own as Kolobnev dropped back to the bunch and Bisolti slowed to put on a jacket. Eventually Bisolti rejoined Zhupa for two men up front.

Onto the flat roads and the weather conditions improved enough for the rain jackets to be passed back to the team cars and while this was going on, the lead for Zhupa and Bisolti went back up to 2:08 as the race passed through the town of Bojano after 82 kilometers.

A little further up the road, with less than 70 kilometers to go, the lead had gone to 4 minutes and Tim Wellens and Pim Ligthart (both Lotto Soudal) and Laurent Didier (Trek-Segafredo) tried to jump across to the leaders. By the time the race hit the feed-zone in Campitello Matese, after 86.7 kilometers, the two leaders had 5 minutes on the peloton and only 50 seconds on the three chasers.

With 63.2 kilometers to go Wellens/Ligthart/Didier caught Zhupa and Bisolti and the five had an advantage of 4:30 and Lampre-Merida put their full team on the front for a short time before they were replaced by Giant-Alpecin. 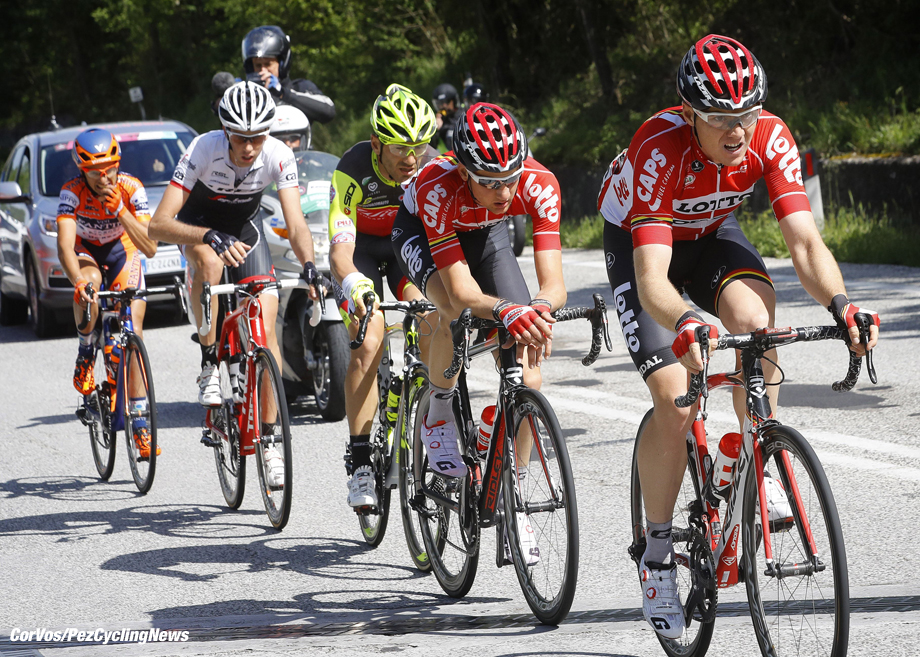 50K to go
Through Isernia the lead had gone up again to 5:49, mostly under the impetus of Ligthart. The bunch now had Sky and Tinkoff putting a man to the front along with Lampre-Merida, but the break pushed on and with 40 kilometers left to race, the lead was 7:23 and the sun had made a return. The time difference translated into an advantage of 5 kilometers on the road.

30 out
The lead ballooned to 8:30 as the peloton was showing little interest in the chase. Orica-GreenEDGE had moved to the front, but all the GC men had come forward readying themselves for the last push on the climb of Roccaraso. The sprinters formed their ‘groupetto’ off the back around the red jersey of Marcel Kittel (Etixx – Quick-Step).

Castel di Sangro
At the second sprint of the day, with 19 kilometers to go, the lead was 7 minutes and Ligthart was first across the line, but with all the work he had been doing no one was going to contest the sprint.

Roccaraso (Aremogna)
17 kilometers of climbing faced the group of four, as Ligthart sat up and waited for the peloton his work for the day done. Didier was first to attack, but was passed by Wellens as Zhupa and Bisolti had to let them go.

Astana put all their men on the front for Vincenzo Nibali and into the final 14 kilometers the lead was at 5 minutes. At the back; KOM leader Cunego was in trouble and struggling to hold on.

Astana sent Fuglsang up the road and Sky sent David Lopez after him which failed. The speed at the start of the climb has shrunk the peloton and with Fuglsang up the road, Giant-Alpecin moved to the front again to protect the pink jersey of Dumoulin. Dimension Data’s Kanstantsin Siutsou rode across to Fulgsang, but with 10 kilometers to go they were 4:28 down on Wellens and only 30 seconds ahead of the pink jersey group.

Bisolti had found some strength and pulled himself up to Didier on the steep ascent, but they were losing time on Wellens.

The Final 5 Kilometers
Wellens was leading Bisolti who had dropped Didier, Fulgsang had moved into the virtual overall lead with Siutsou along for company at 3:24, the pink jersey group were at 3:56 with Movistar working to limit the loss. 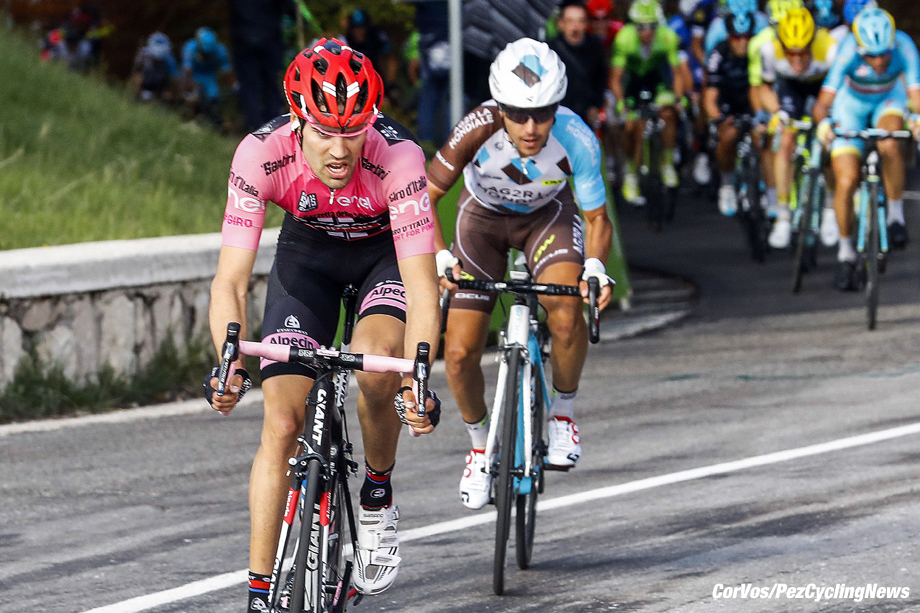 When Tom Dumoulin made his move, Nibali had no answer

Fuglsang and Siutsou caught and dropped Zhupa, Didier and Bisolti. Behind; Vincenzo Nibali attacked, but Sky had two men on the front to pull him back, next to react was the pink jersey of Dumoulin, the Dutchman was joined by Domenico Pozzovivo (AG2r-La Mondiale) and Ilnur Zakarin (Katusha) and they in turn caught Fuglsang and Siutsou. Nibali had nothing in his tank.

Almost forgotten was Wellens who won his first Grand Tour stage and celebrated by holding his Ridley bike aloft after crossing the finish line. 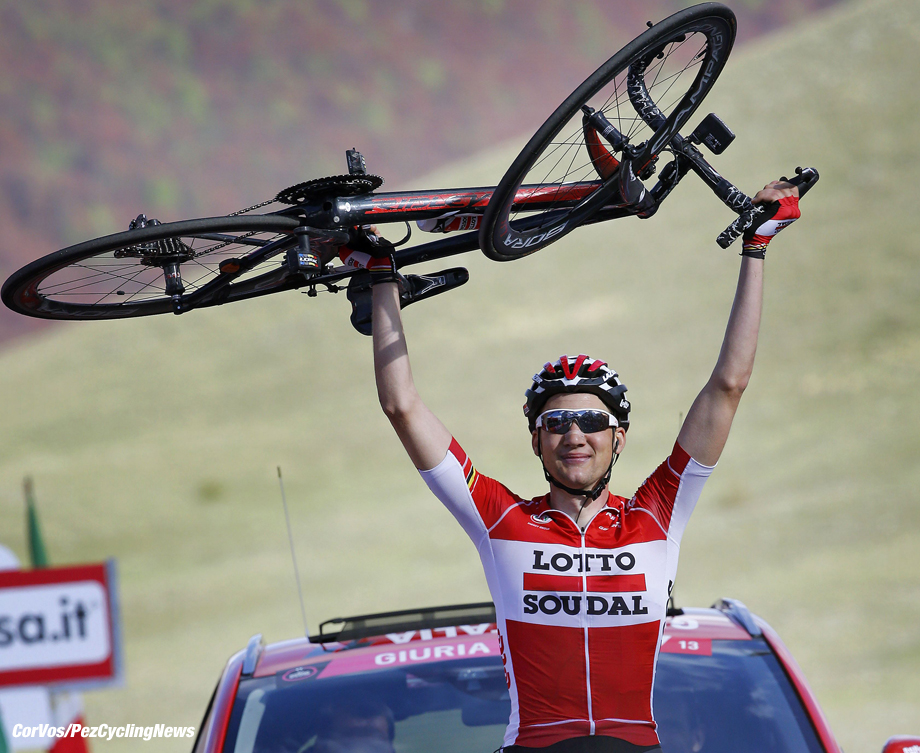 The peloton was splitting under the impetus of Rafal Majka (Tinkoff) and Esteban Chaves (Orica-GreenEDGE) and surprisingly Nibali couldn’t follow the other GC riders.

Of the split of five riders; Fuglsang took second place with Zakarin and Dumoulin on his wheel. The others came across the line in ones and twos. Nothing much has changed in the overall, but some seconds were gained and lost here and there. One question has arisen – Is Nibali on form? 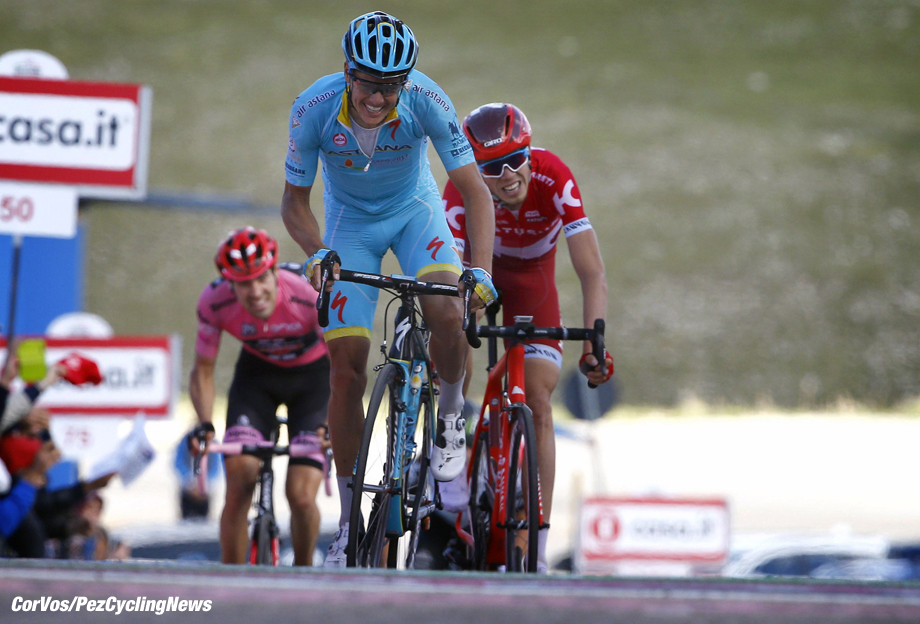 Fuglsang was second – where was Nibali?

Keep it PEZ for lots more Giro news and roadside.