Thank You Ireland: Best of PEZ’14

Roadside St. 3: The 2014 Giro d’Italia’s Irish sojourn has come to an end with Marcel Kittel being the sorriest rider to leave after two awesome sprint victories. After crossing from the north into the land of bilingual roadsigns, Euros, and kilometers not miles, we’ll also be sorry to see the Giro return home.

Pez Best Of: With another year under our belts our contributors from around the world have picked their favorite stories of 2014 with this one from the last Irish stage of the Giro being amongst Gordan’s favorites. 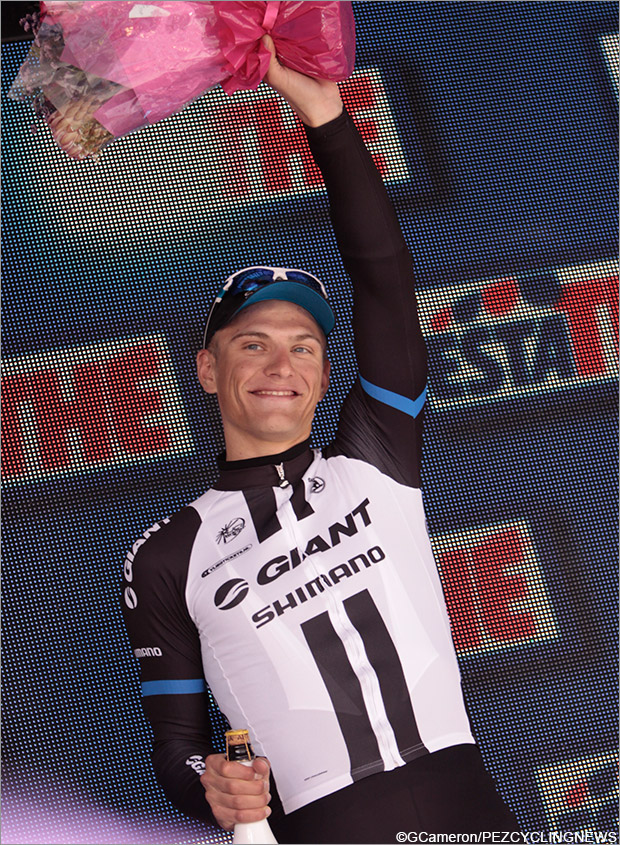 For fans from Ireland, the chance to see a Grand Tour without having to go to an airport and leave the country is incredible. Top class riders, great scenery, challenging routes and first-rate fan turnout, especially in the north.

We opted to abandon going to the start in historic Armagh city, or the mountain sprint in Markethill, as the gunmetal-grey sky looked fit to burst. Twenty miles down the road, passing Newry, the sun blazed down, sunglasses on, a private moment of “Maybe we should turn back?” Nah, onwards … to Dublin. 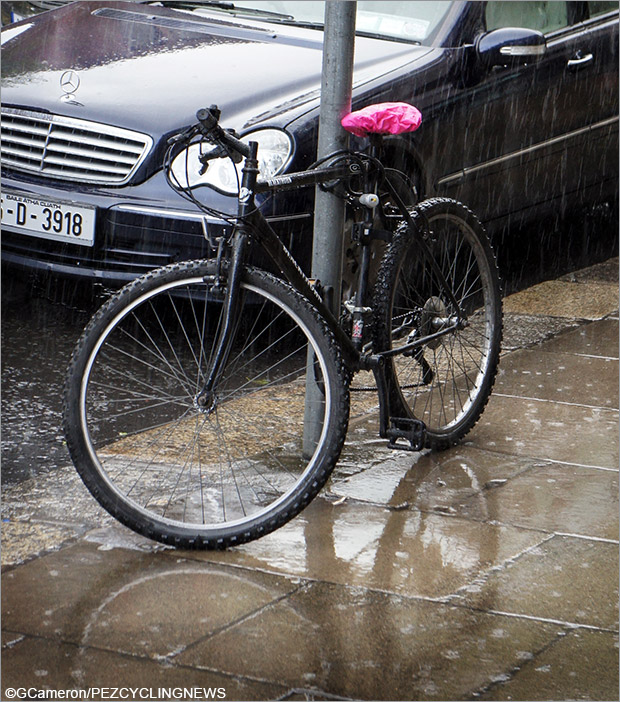 I reckon both Northern Ireland and the Republic will have got what they hoped for from the visit even although the weather didn’t play ball all the time. It just carried on with its auto-shuffle selection of rain, warmth, cold and sun.

What was odd, as we reached the city was the disappointing level of engagement for the Dublin stage. In and around Belfast, all along the route to the north and east coasts yesterday and even well inland off the race route, the whole place had gone pink. 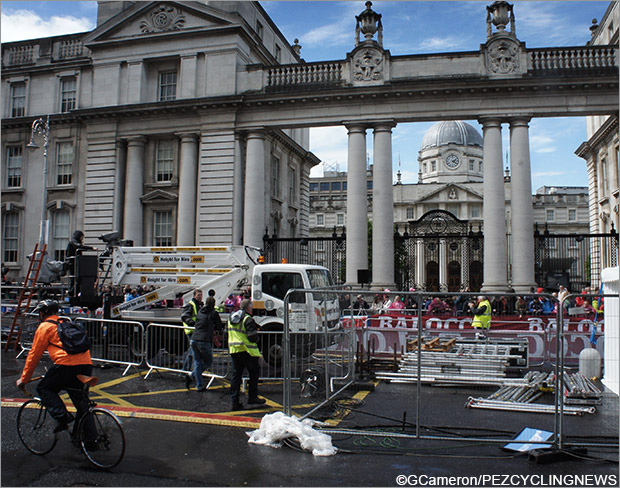 The Giro’s arrival was a huge deal, but the electronic information boards on the roads leading into the Irish capital today raised our eyebrows: “Road closures. Cycling event. 11th May”. Really? “Cycling event” is the best that could be managed for one of Europe’s biggest sporting events?

The painters exhibiting on St. Stephens Green had been turfed out of Merrion Square but didn’t really seem to know why. Had they heard about the Giro coming? “Well … I just saw a couple of nice racing bikes go past,” said one of them to me about three hours before the race arrived.

There is a disproportionate number of local hipsters cruising around, all quiffs, big beards, soft shoes and fixies. For the tourists, fleets of touring bikes to thrash about on. 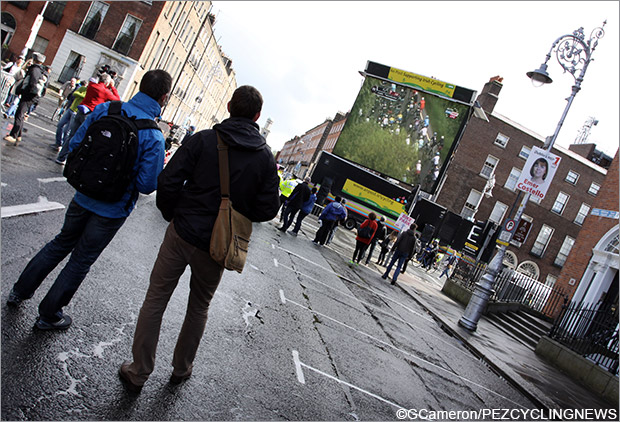 We took a wander through Grafton Street and there were very cool pink posters up, but no evidence of shops or businesses going pink. Nearer start time though, and it’s getting busy. The Irish Cycling Show is on in Merrion Park. The fans suddenly appear, as if out of the ether. The finish is lined six deep on either side and it’s jumping as the race steams closer.

In fact, it gets really busy because the local fans have simply taken up residence in the tents meant for the soigneurs and press, and they more or less refuse to vacate until more barricades are brought in. 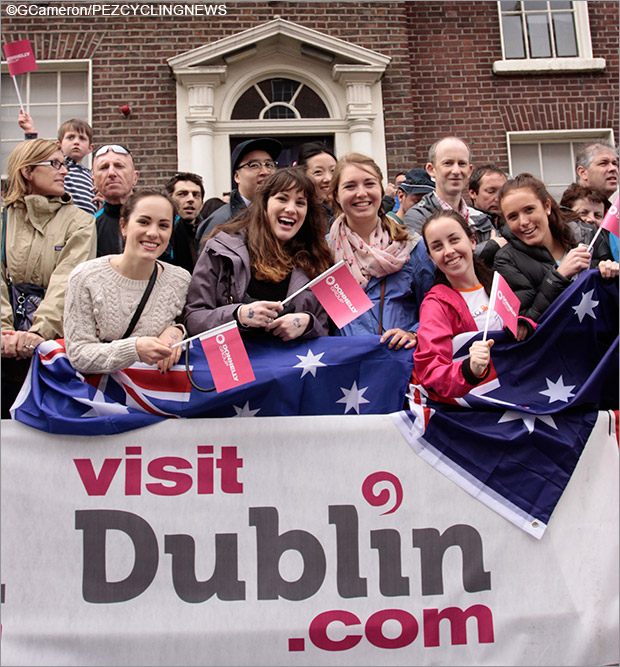 There’s a voluble Aussie presence just past the line, very happy that their guy Michael Matthews is in pink. There are Dutch flags, Norwegian flags, and a fair few Union Jacks for Team Sky. 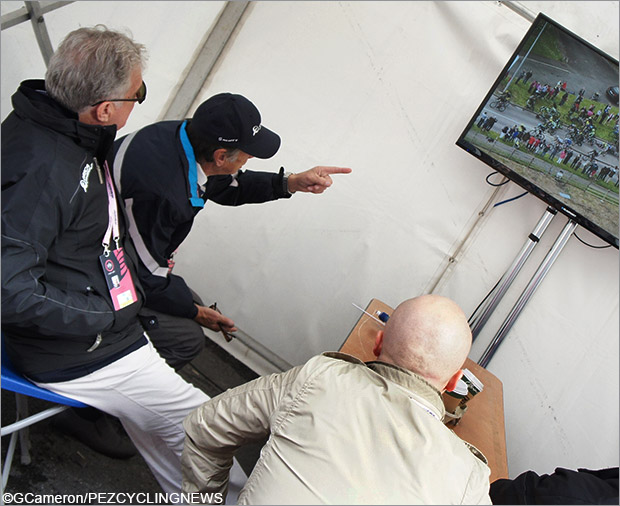 Also very happy is the Orica-GreenEdge boss Gerry Ryan, but his face is stony set and his hands are lodged in his pockets as he watches Cameron Meyer gingerly creak upright and check to see if his chin is still attached after another maxi-caduta on the slick roads. 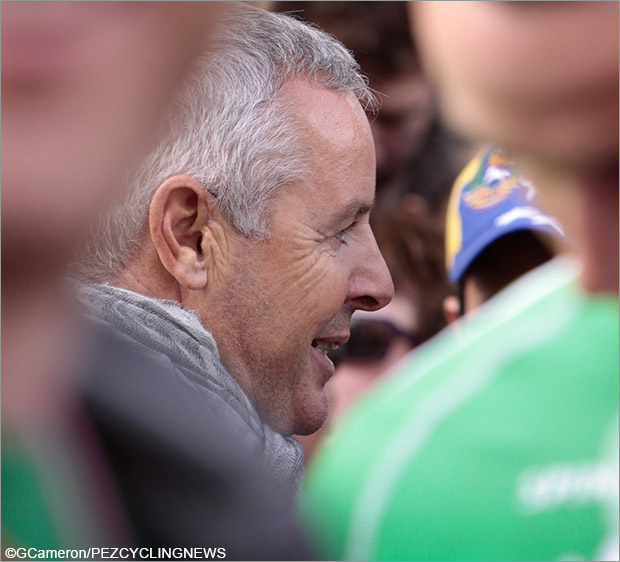 A former Giro champion, with and even more fatherly connection to a rider, is being interviewed, interrupted and glad-handed by an endless procession of the starstruck as he waits for his boy to come home. Nico Roche went to school here, at Blackrock College.

The field barrels south along the coast, through Castlebellingham, Balbriggan, Skerries, Portmarnock, Clontarf and then over the River Liffey. The helicopter clatters overhead and the official vehicles appear, horns blaring. 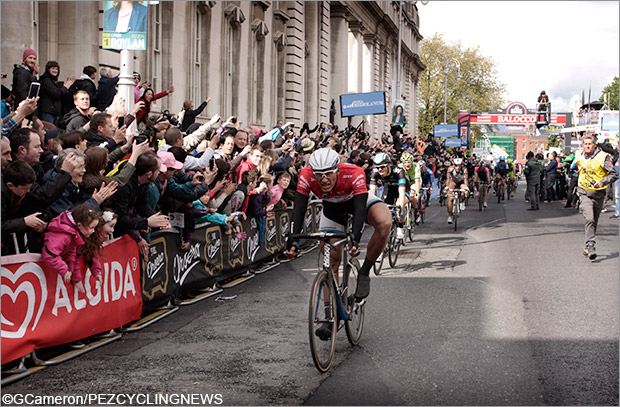 We’ve decided on the finish to avoid the chance of a washout further north and also because the sheer visceral thrill of seeing … hearing … feeling the race close in is just heart-thumping. The sprint unfolds on the big screen. The commentators howl. Kittel, in the maglia rossa, goes past like a missile. 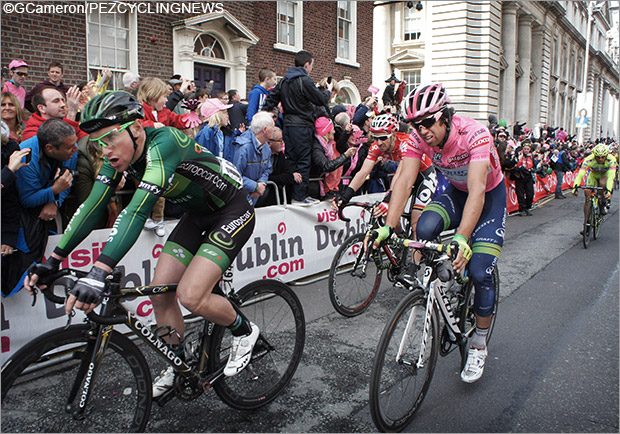 The pink jersey is up there again, not able to match Kittel on a flat finish, but maybe with a bit more difficulty thrown in he’ll do the business. More important though is hanging onto the maglia rosa for another day. 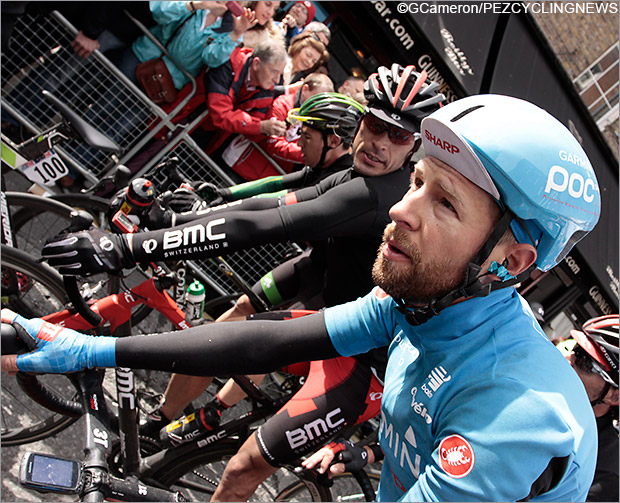 The leadout riders come by slightly slower, then the field arrives and starts to clog up the finish area as they try to navigate to the busses. I’ve seen it much more frenzied at the Tour, but the Giro is, thankfully, not quite the same monster. 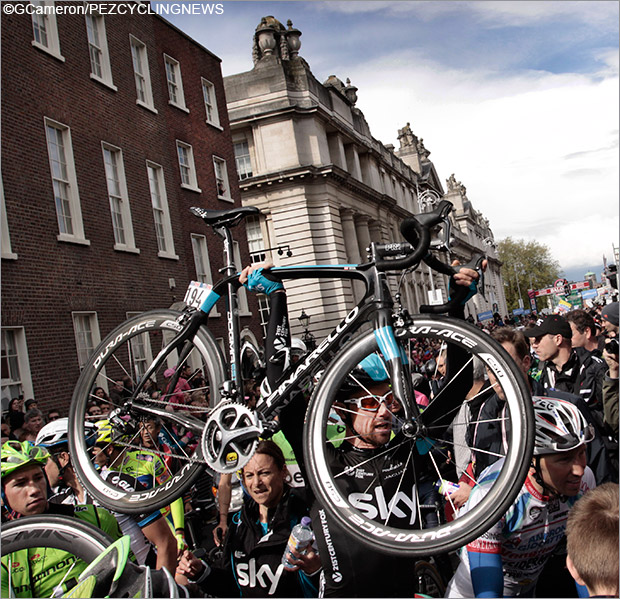 Sky’s Bernie Eisel has done another great job but his good manners are allied to a bit of blunt common sense. Unable to fight through, he takes direct action to further his cause of escape. 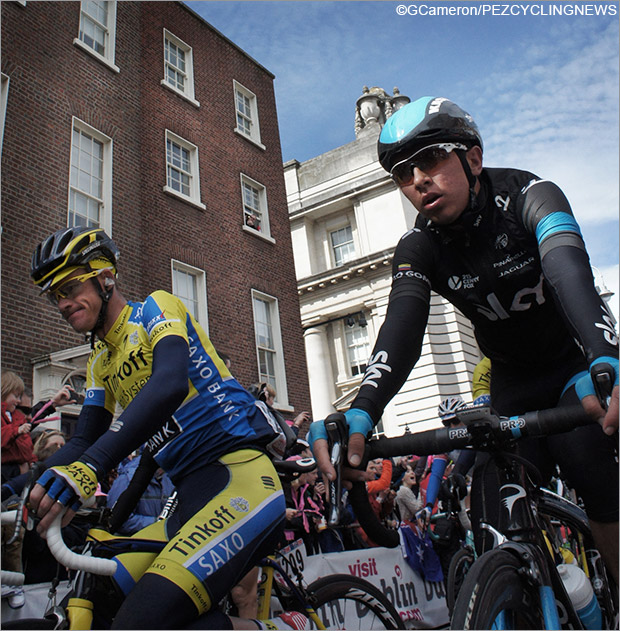 Sebastian Henao and Michael Rogers grind to a halt and tick off another day closer to the mountains as all around, cameras click and TV reporters try to grab interviews. 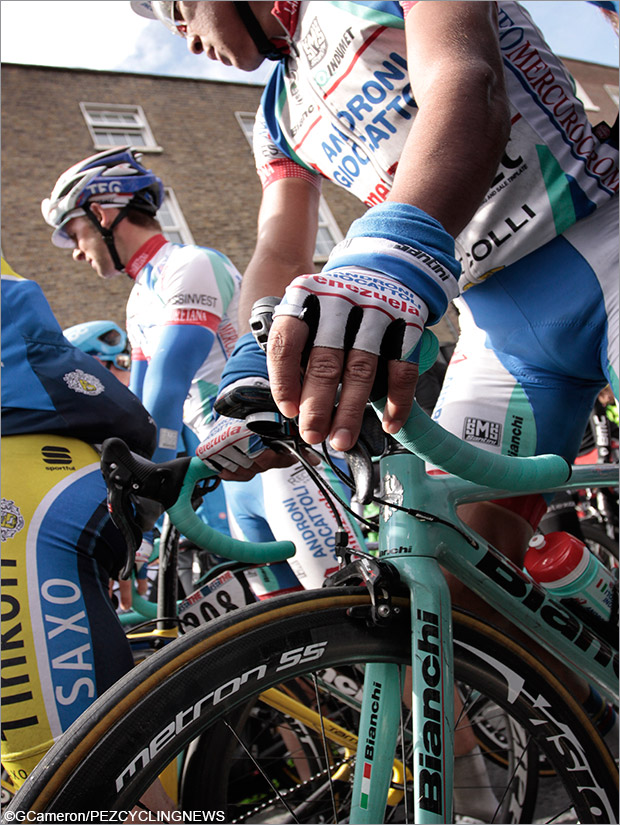 It’s a symbiosis, as much as a feeding frenzy. The teams need publicity for the sponsors, the riders have to represent the team, the reporters need the riders. As long as you don’t tread on anyone’s toes, it all goes fine.

Christopher Juul-Jensen is back home. Danish name, Danish family, Irish to the core as he was brought up here, so he’s as in demand as Roche and Deignan. 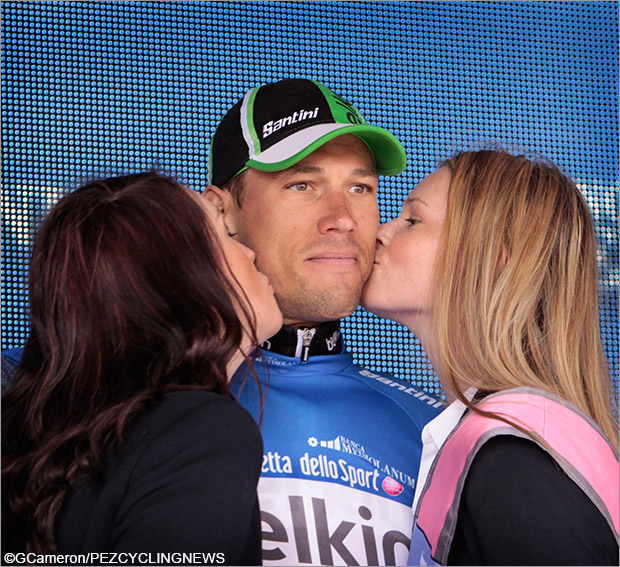 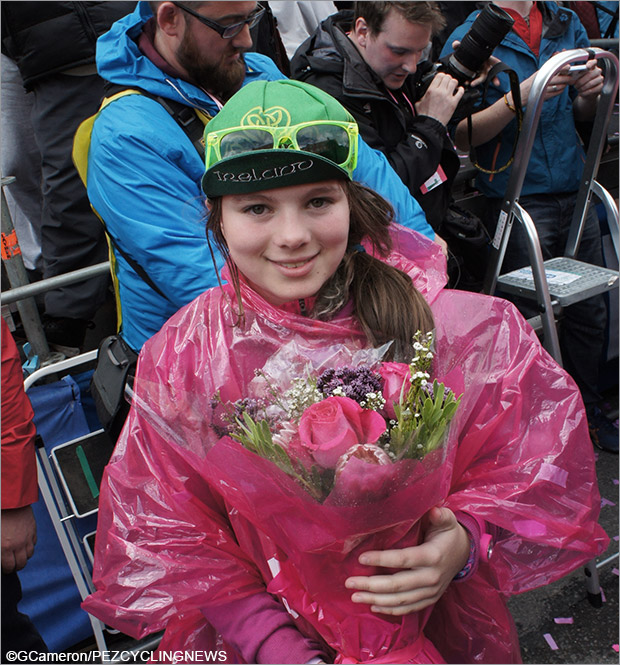 Belkin’s Martin Tjalingii dons another blue mountains jersey and launches his bouquet into the crowd. Despite the adults acting like kids, it actually lands square in the arms of a little girl standing by the barriers. 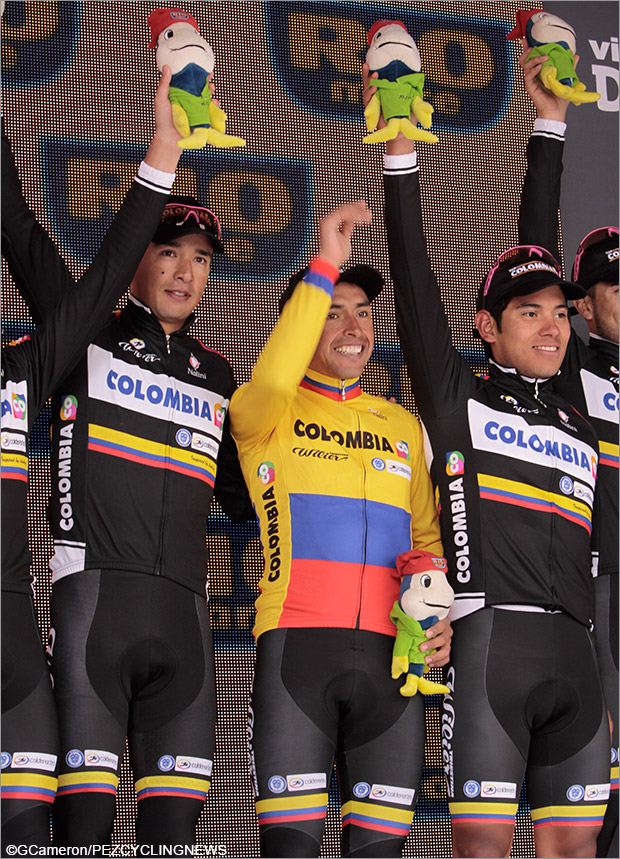 The Colombia squad has been super-active in the three Irish stages and deservedly win the third stage team classification. They got a huge reception, and after surviving the rain and wind here they’ll surely get an even better chance to shine in the mountains back in Italy. 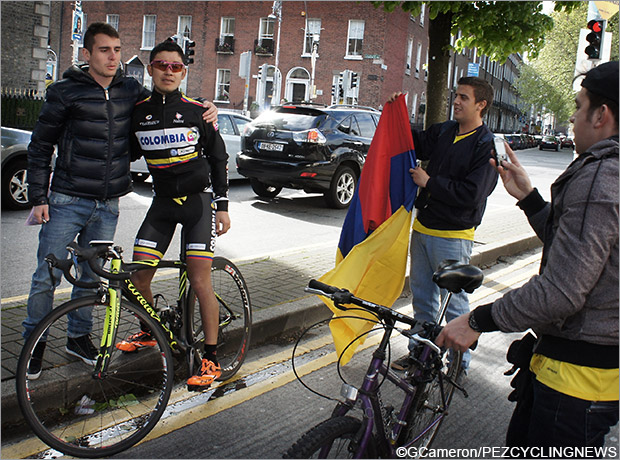 We set off to find our hotel, and some of the podium presentation stragglers are winding their way to the busses, a Giant-Shimano rider coasting by clutching a bottle of champagne. The Colombians have been grabbed by their compatriots, just off the back of Merrion Square for a photo-op as the traffic gets flowing again. 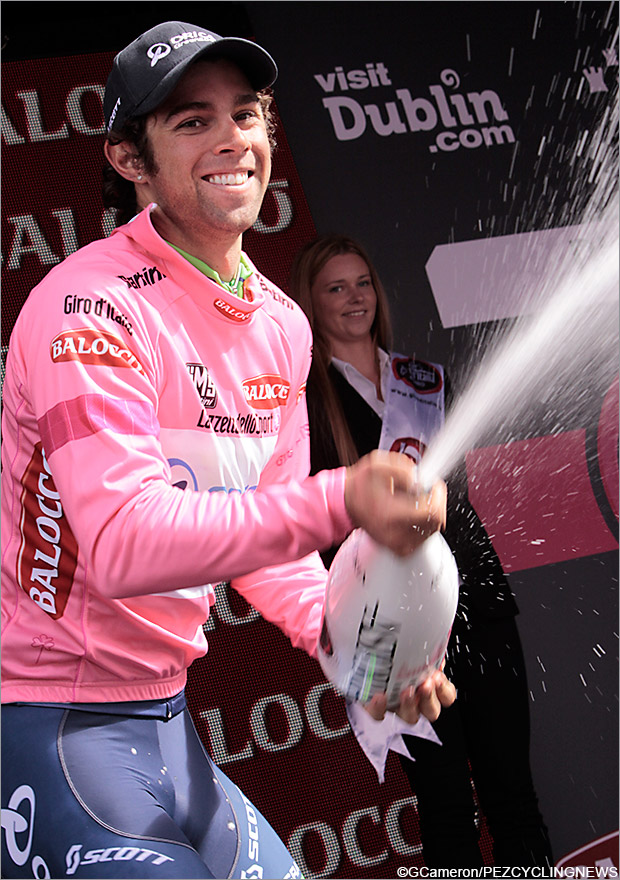 For us, it’s back home to reality. Molto grazie to all at the Giro, and slán agus beannacht lead from Dublin.
Thanks for reading.