PEZ Roadside St.20: Giro’15 St.20: There’s only one place to watch this penultimate stage of the 2015 Giro d’Italia – and that’s on the spiralling slopes of the Colle della Finestre. Ed & Martin battled closed roads and the long way ’round, but made it to the top of one of cycling’s most epic climbs.

We like the quotes from Gazzetta journalist, Marco Pastonesi in Daniel Friebe and Pete Goding’s book, “Mountain High.”

‘An intestine of vertical asphalt’ and ‘alcoholic gradients’ – he speaks of course of the Colle delle Finestre.

A total length of 18.5 kilometres is further qualified by the fact that the top 7.8 of those hard K’s are on ‘sterrato’ – dirt road. 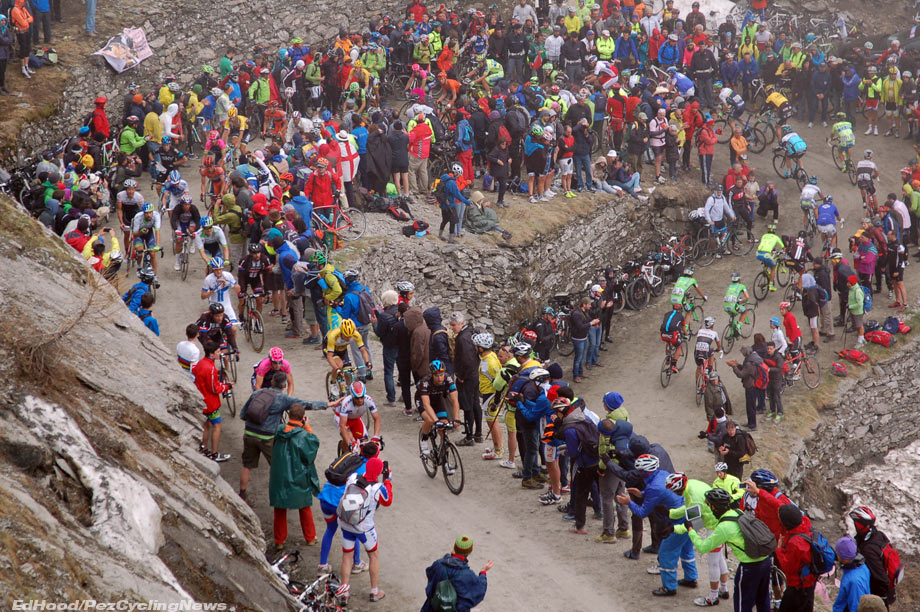 The average gradient is 9.2% for the whole ascent with maxima of 14% on the asphalt and 11% on the dirt.

It’s also the ‘Cima Coppi,’ the highest point this Giro will reach at 2,178 metres.

The passo was hacked out of the mountain side in the year of our Lord, 1700 to serve the Forte Fenestrelle; ‘Finestre’ is Italian for window and with it’s huge height it indeed provides a ‘window on the world.’

It’s nickname is the, ‘The Mountain of the Indians’ – Friebe’s book imagines from ‘Aztecs keeping guard over their mountain’ or perhaps North American Indians lining a canyon rim which John Wayne has strayed into ? 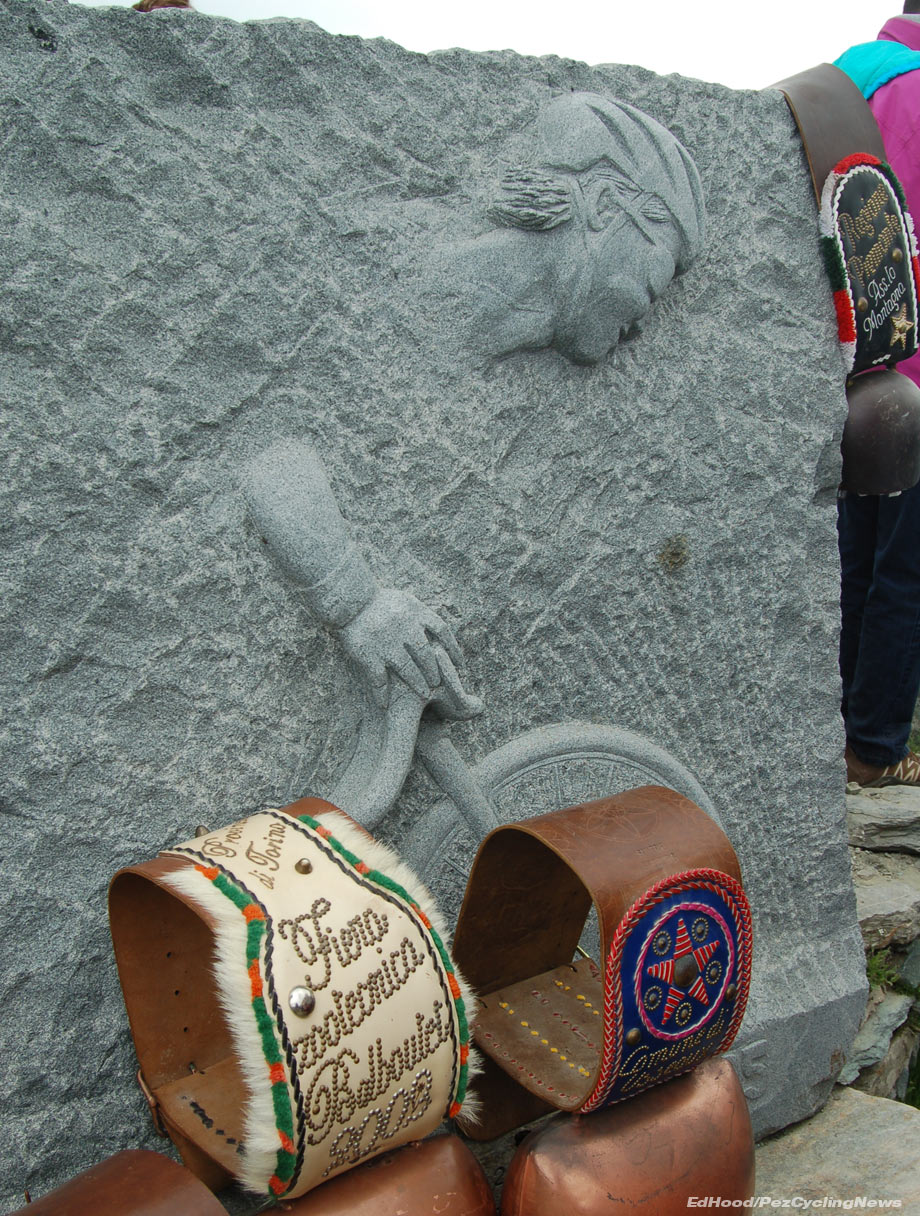 The first man to breast the Colle was the inspiring but deeply flawed Danilo di Luca, a carved stone records the deed back in 2005.

Our mission for today (which we have chosen to accept) is to get up there among the tifosi and share the experience with you. 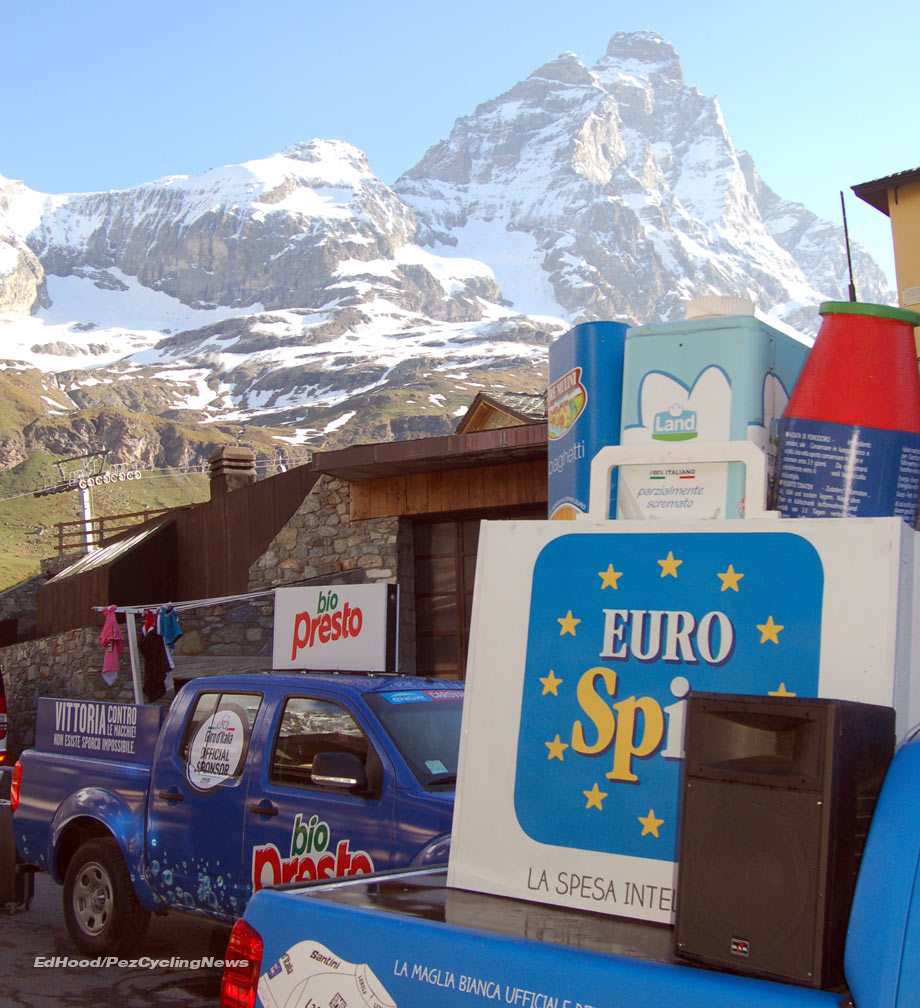 We started our day in Cervinia with the Matterhorn towering above our hotel and were on the road early – we’ve had no official communication but we’re a wee bit worried that we might not be allowed on the sterrato on our journalist credentials after a certain ‘cut off’ time.

Best get up there pronto. 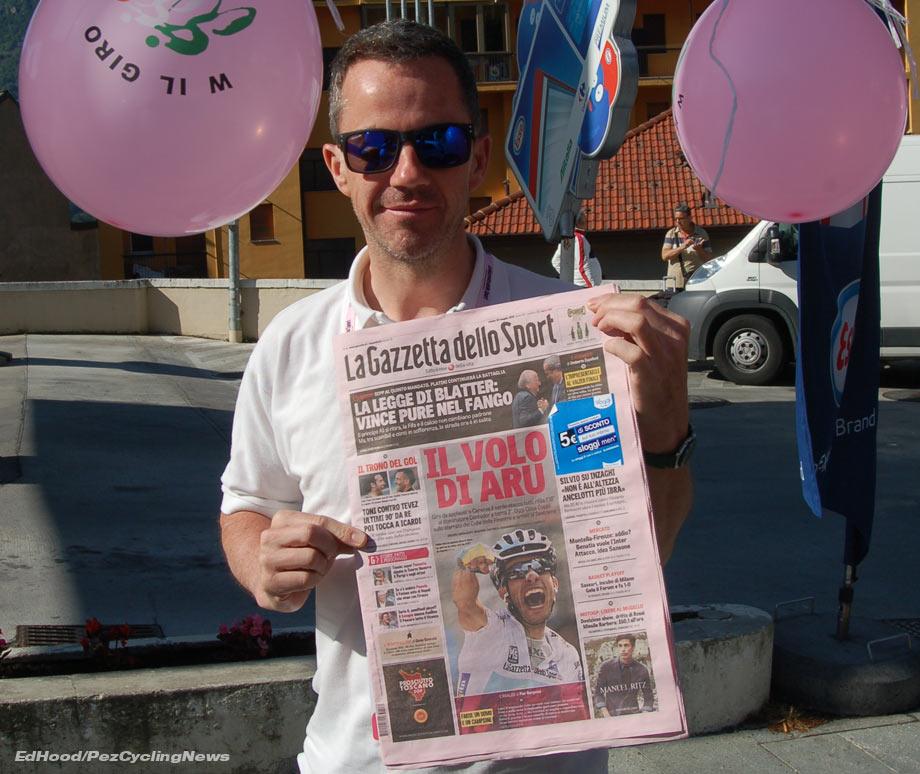 Let’s check out the Gazzetta though; Aru front page – my, that’s a surprise !

Nothing changes for Alberto, but Astana, Aru and the organisation are all very happy.

Well, he’s a Basque – and this ain’t the Novarra.

Aru has been clinging on by his finger nails for days and yesterday he’s off up that road like a ferret, remarkable . .

But it was unquestionably a brutal stage; last man across the line yesterday was 2014 Giro final stage winner, Luka Mezgec (Giant & Slovenia) – he conceded 57:14.

Ivrea, the percorso turns 90 degrees right but it’s a one way street and we can’t go up there – they close the roads late on the Giro, unlike on the Tour de France where they’re locked down tight from early morning – satnav time to the next town on the percorso.

Folks ask where all your time goes in the Giro – there’s 30 minutes evaporated right there.

It’s time to pick up the autostrada, the routing crews haven’t done their business yet and it’s impossible to follow the percorso just yet.

Disastro ! At the foot of the Finestre, even though we’re there four hours before the race passes it’s closed to everything except bicycles, organization cars and team cars.

There’s no negotiation and it would be a 6.65 mile hike to the start of the sterrato.

But the PezMaster’s words are ringing in my ears;

“The ONLY story of the day will be the crowd and race action in the final 6km of that climb.”

Plan B, head for the finish at Sestriere and try and come in off the ‘wrong’ side.

Just like we Scots did with the English at the Battle of Preston Pans.

They’re still setting up at Sestriere when we put our plan into action – trickle through the finish line like we belong there then plunge down to the point where the percorso comes off the Finestre, sharp left and UP !

Martin remembers the Golden Rules; avoid all eye contact and DO NOT STOP ! 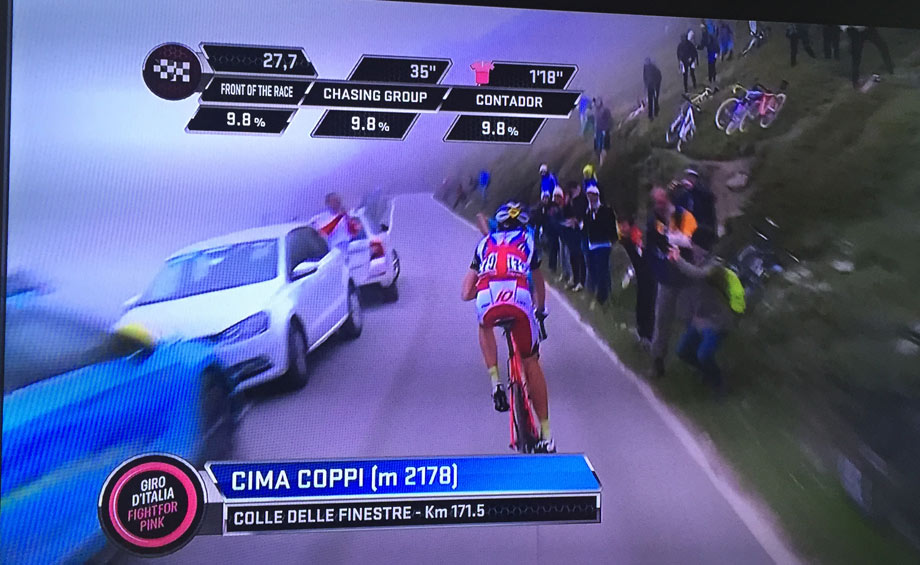 Success!  That white car on the left is the mighty PEZ-Mobile.

Later that same day…
The MotoPez is snuggled in between an IAM and an Astana team cars about 50 metres from the summit; we’re pointing the wrong way but we’ll worry about that later.

We can see why it’s ‘Indian Mountain’ as the Apaches line the skyline and the clouds roll in to give Alberto Wayne and his band some cover from the attack of air horns and vino breath that will soon come upon them.

First up a caffe with grappa – we’ve earned it on this day; two major road blocks but we still made it.

Then a picture of the stone plaque to commemorate Di Luca being first over this monster in 2005.

I loved his style but he broke my heart – twice.

When he’s dead, he’ll be a hero, a saint, a ‘victim’ just like a certain other small, aggressive climber . . .

Read Charly Wegelius’s book to get an insight into what ‘The Killer’ Di Luca was like as a man and team leader. 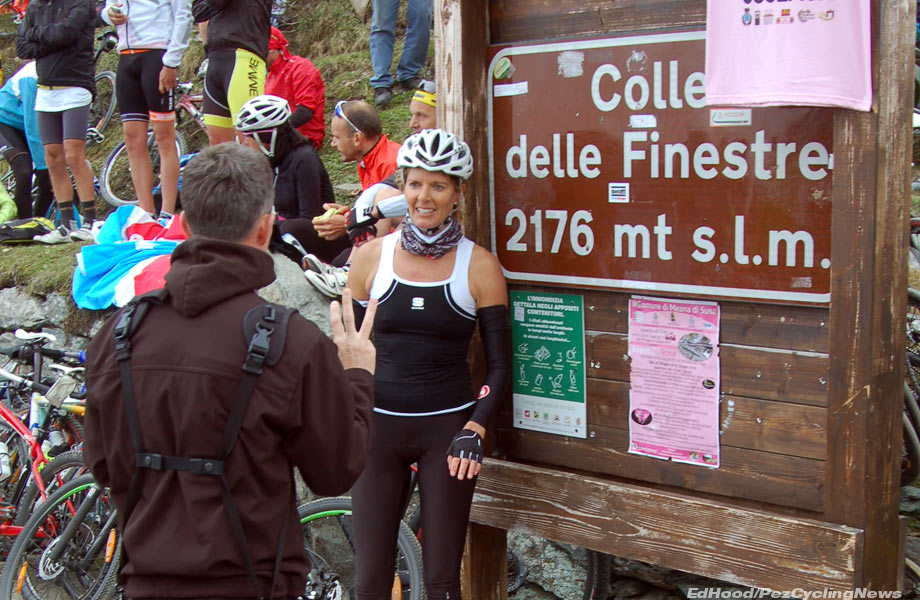 Martin does the honours for a pretty lady, taking her picture in front of the summit sign.

Of course, I have to snap Martin, too. 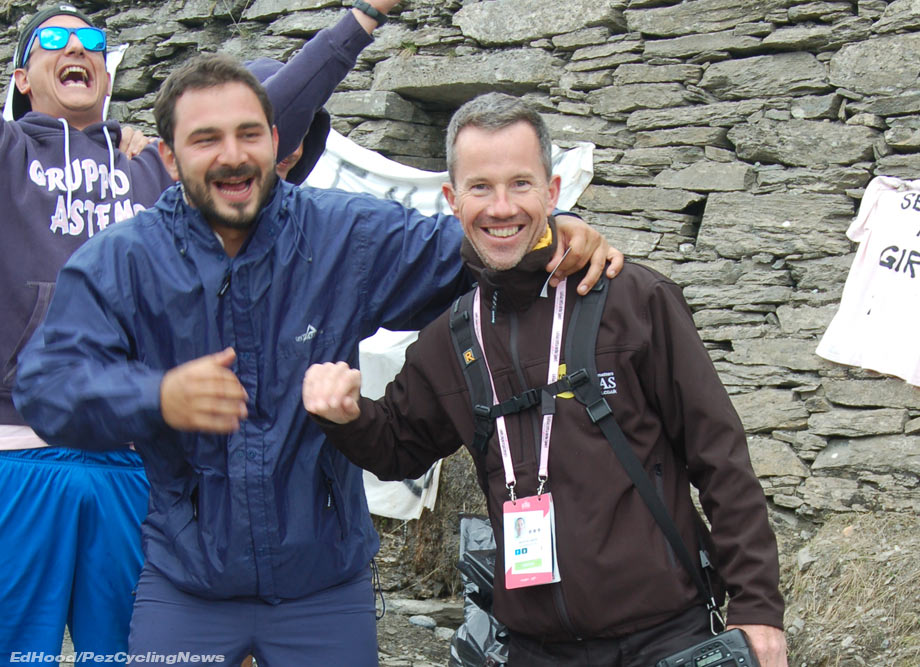 We wander down the hill and Martin makes new chums up here, thin air and alcohol – a dangerous combination but the guys are just having fun.

And what do you know ?

The Grubers are here; Ashley and Jered joining us on this dirt and stones surface which reminds me of the forestry tracks back home.

The crowd is big, remarkably well behaved as the anticipation builds.

The last we heard was when Dave texted up: “break of seven, Ulissi, Berard, Berlota, Bandiera, Boem, Intxausti, Busato, Zakarin.” 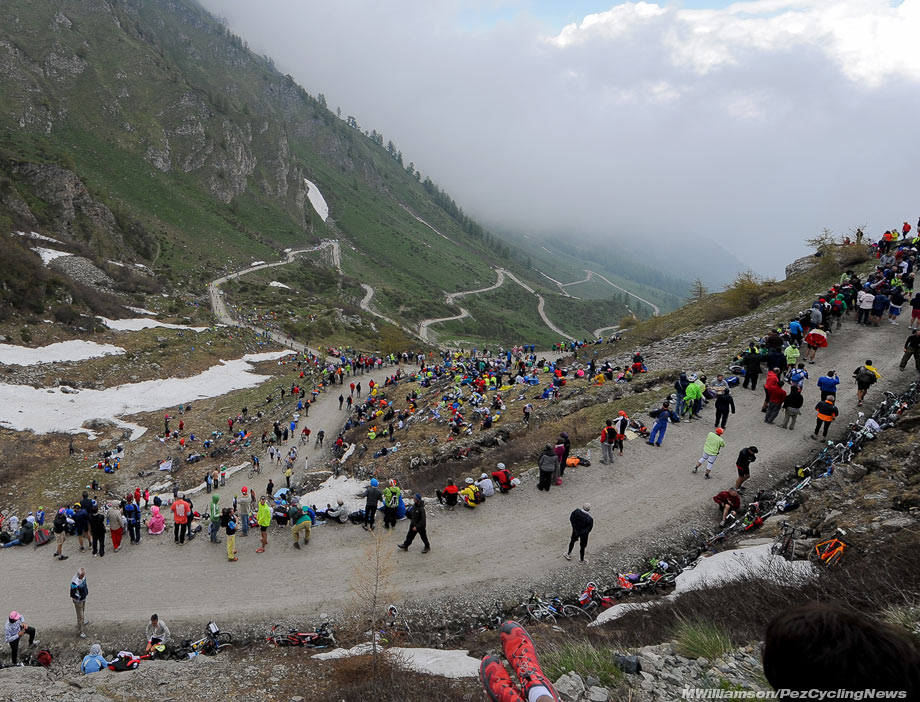 The shouts go up from the Spanish and Astana fans, Mickey, Mickey ! 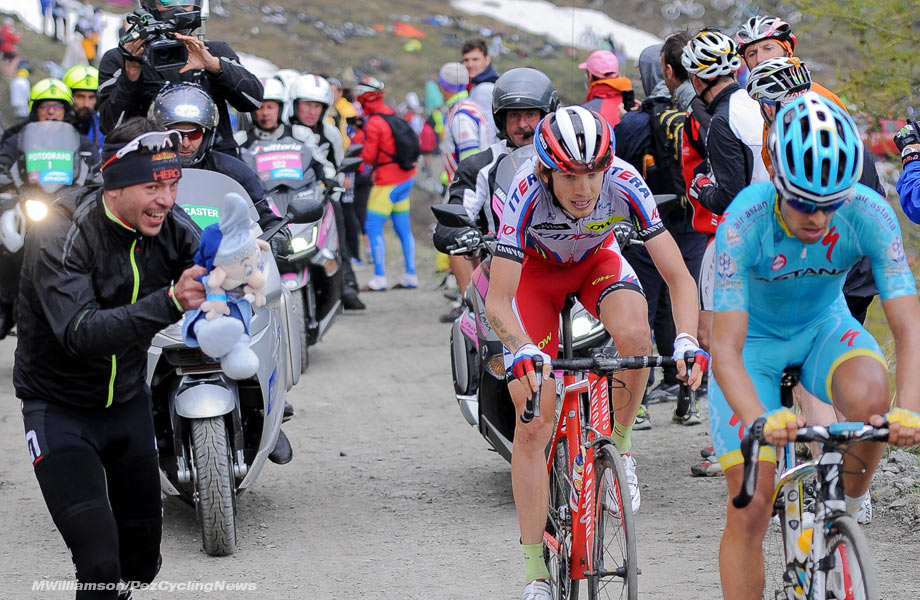 The formerly orderly crowd spills onto the dirt and chaos ensues; Landa is driving hard with Zakarin on his wheel – the big Russian must have jumped aboard the Basque train. 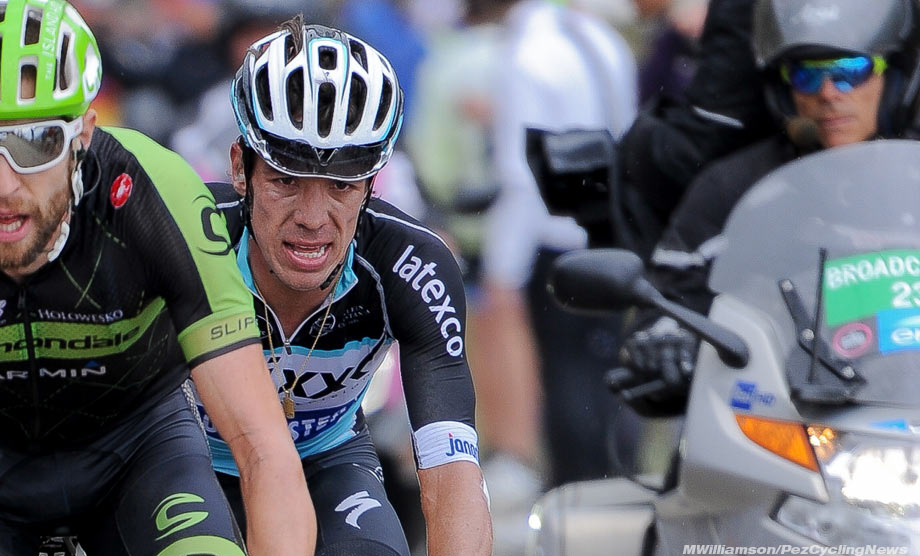 Ryder next, with Uran – if this was a four week race Ryder would win it and such a shame Uran came in sick, we’re only seeing the best of him now. 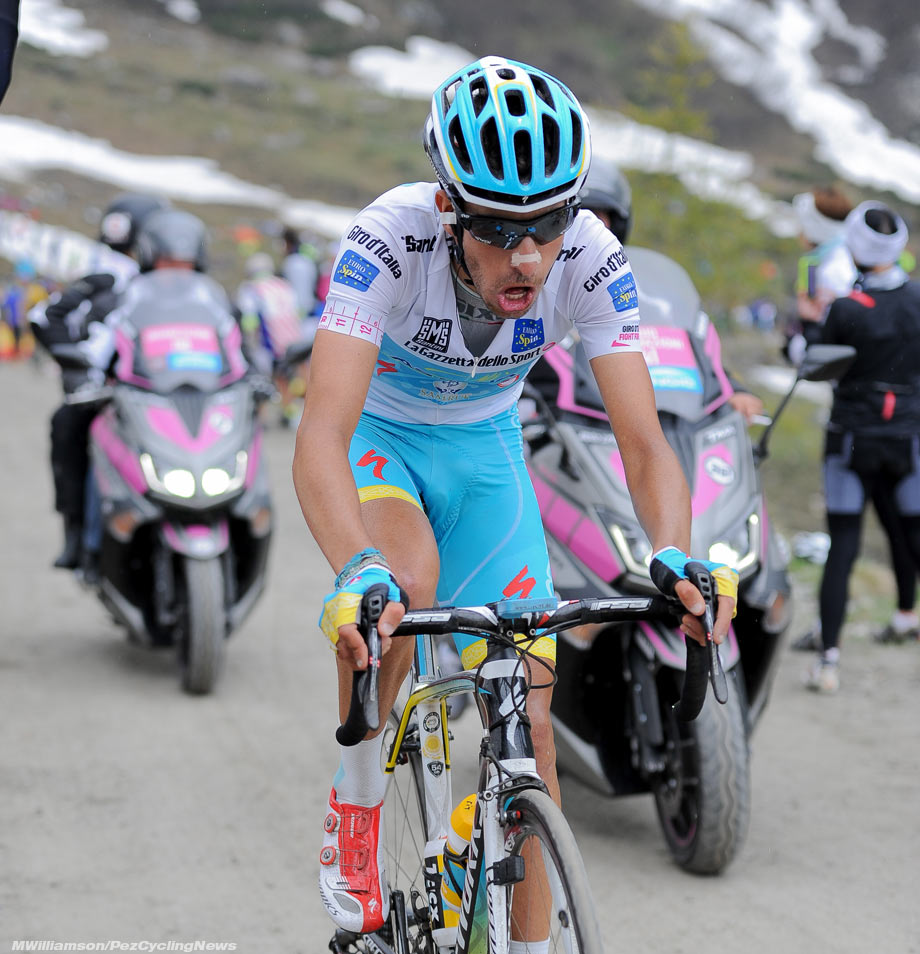 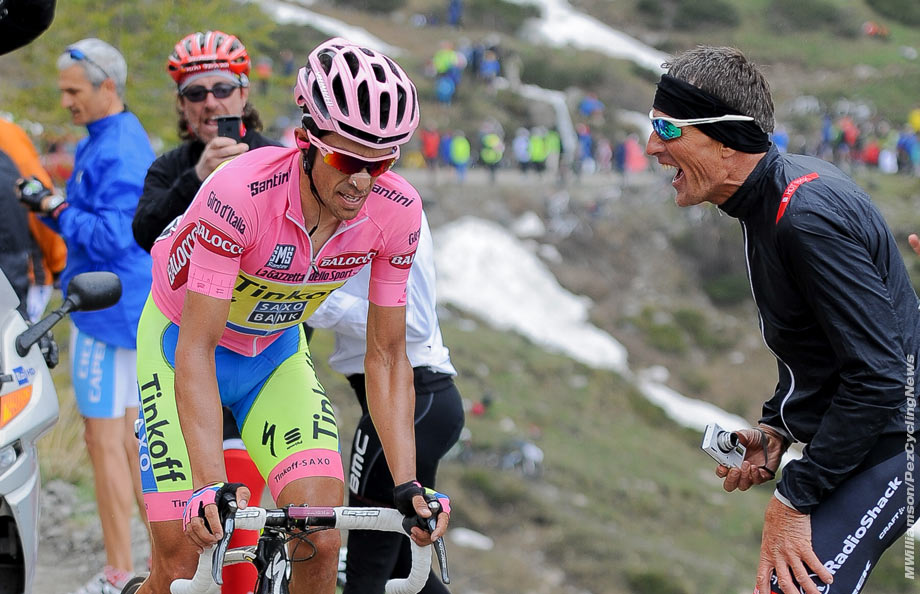 Kruijswijk next with Bert not too far behind but he was with them when I looked further down the tornantes – he’s been distanced.

A rare ‘giornato no’ for the Spaniard – but he won’t panic, there’s too much experience in that mind.

And not a good day either for Visconti, no more GPM points for him today but that break will have suited him just fine, nabbing the points 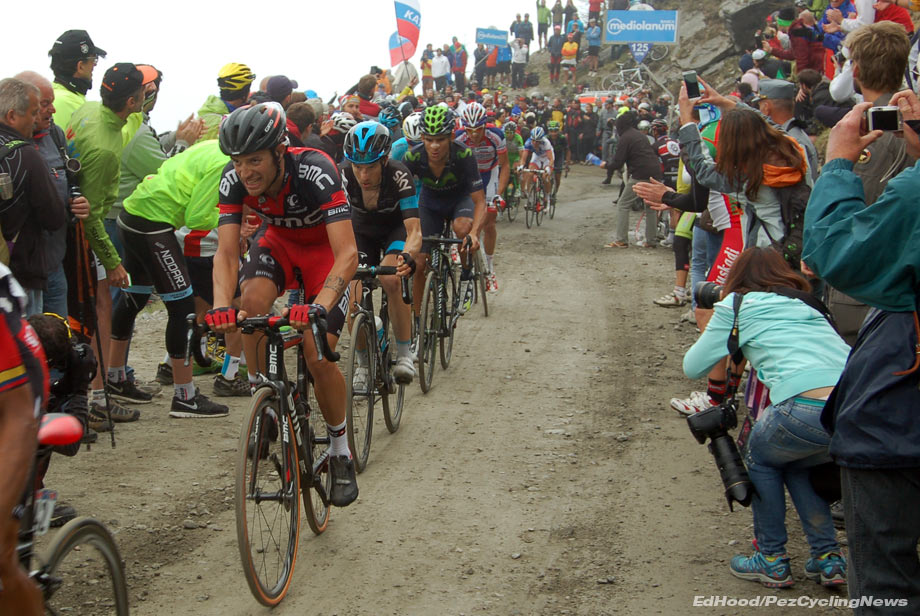 After that it’s slow motion, a spectacle for sure but there are shadows of men all over this hill – you can see half-a-dozen tornantes down the mountain where little clusters of brightly coloured ants are crawling up the ribbon of dirt and grit. 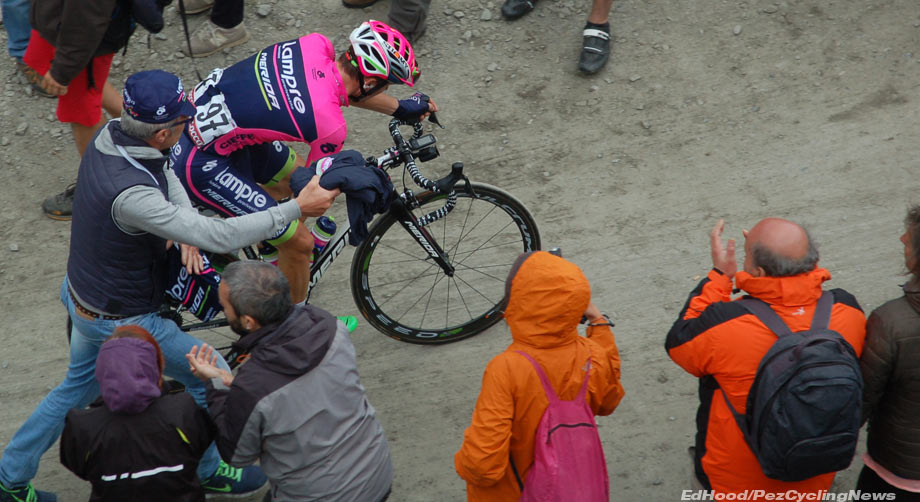 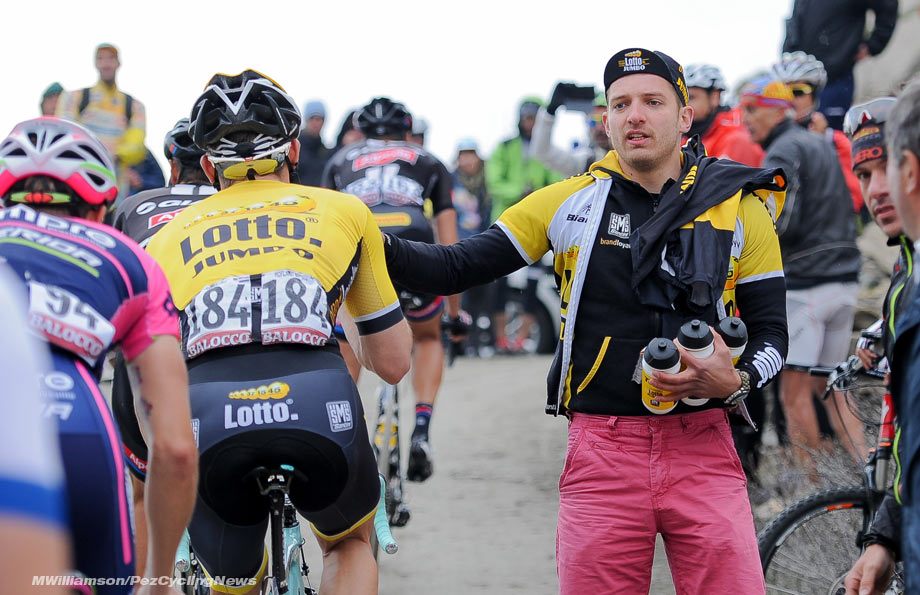 No need for soigneurs to run with capes or bottles they just walk briskly alongside their boys who are all on ‘granny’ gears and at the end of their tether. 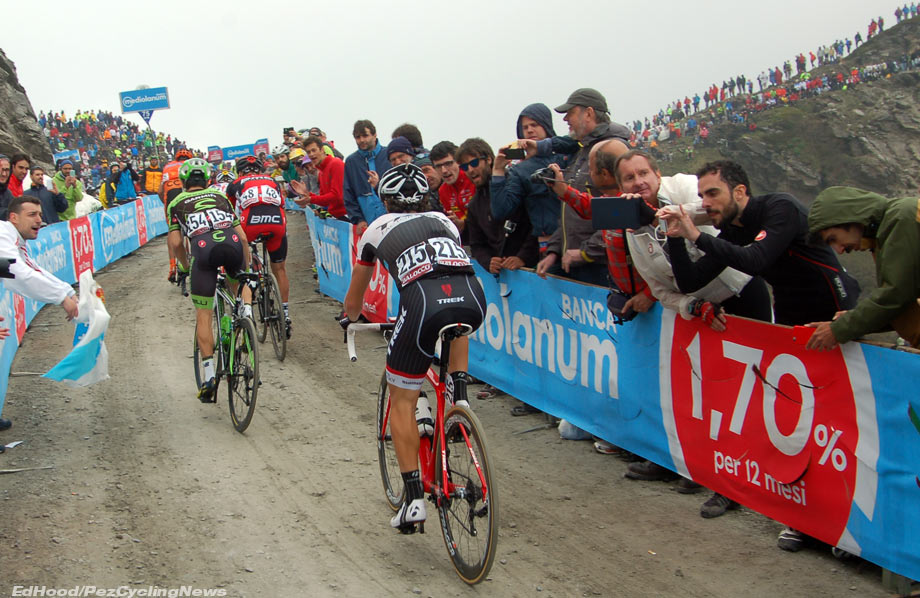 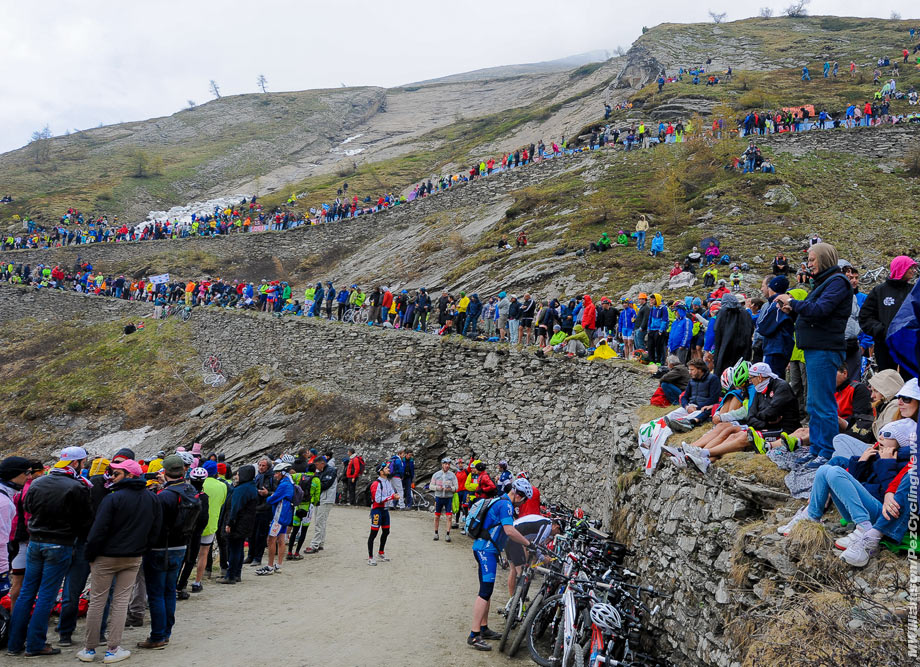 Many of the crowd decide it’s time to go and start to ride up or down the climb, those in the crowd who know the score give them a bit of ‘verbal’ and the foresters who help with the policing do their best to keep them off the road as tired, tired men claw towards the skyline. 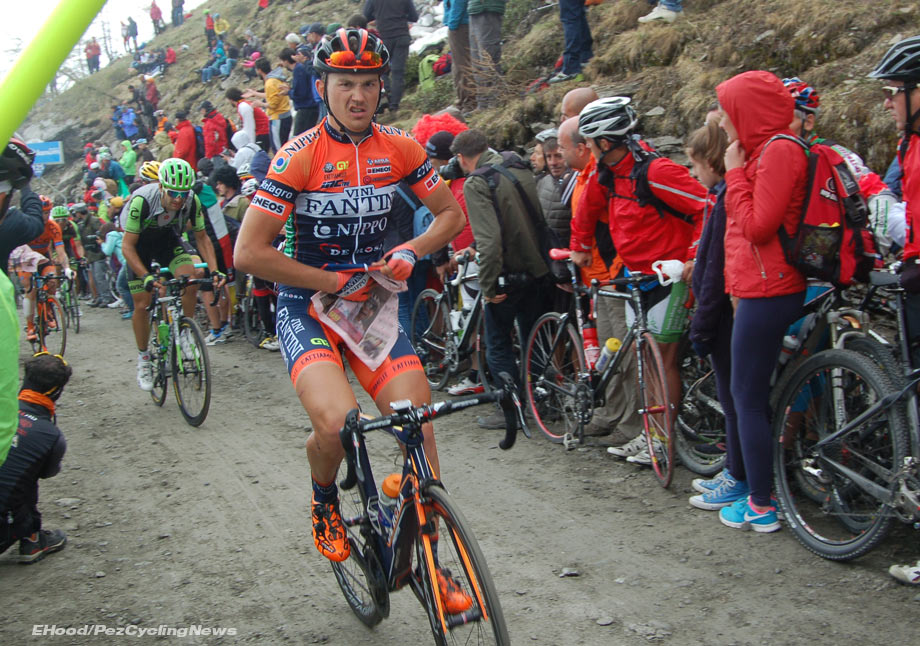 Newspapers are stuffed up jersey in preparation for the plunge down to the main road and the grind to Sestriere. 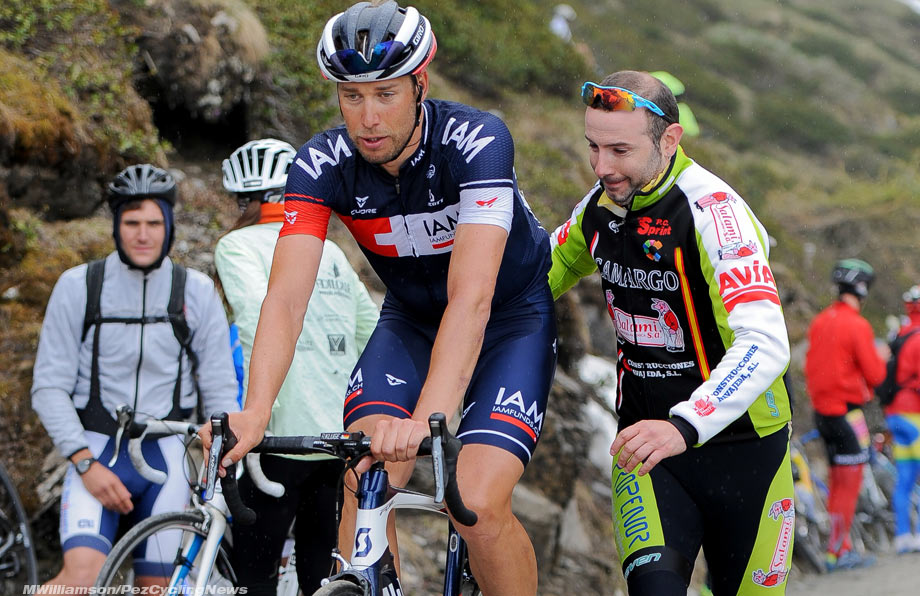 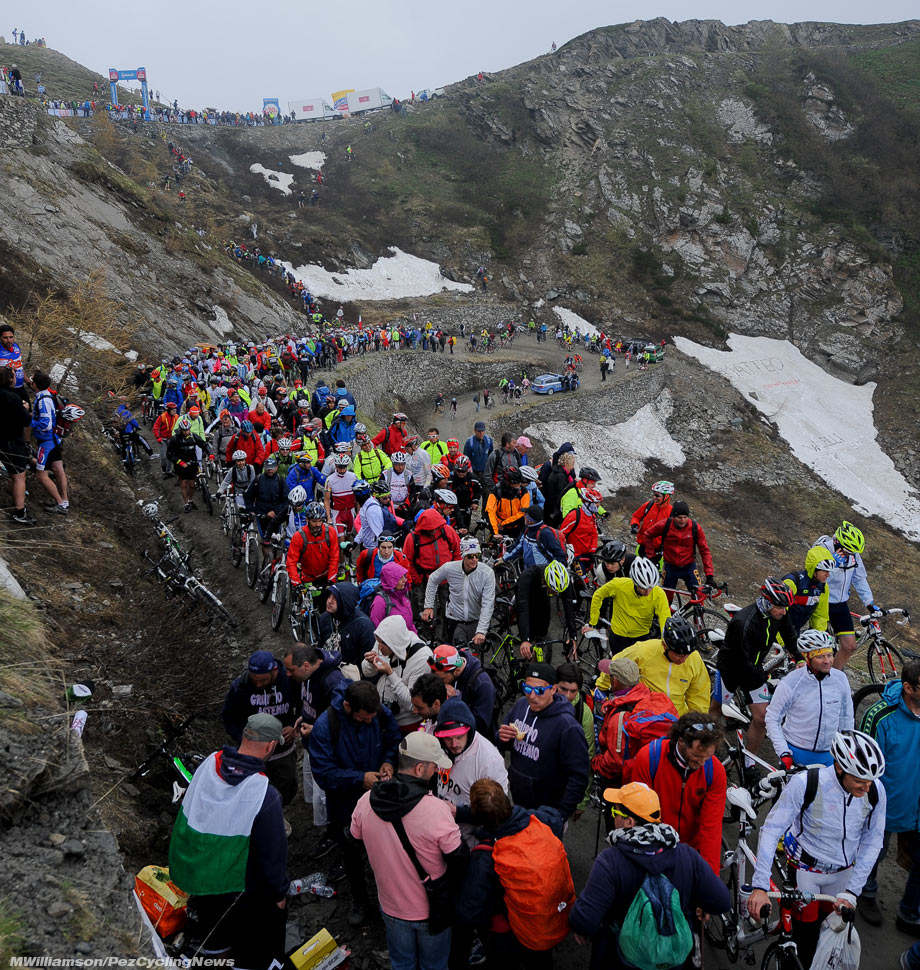 After the ‘fine corsa’ van passes, it’s chaos as thousands wash off the mountain in a tide of bikes and colour.

We head for the car to get our images on to our computers and let the tide go out.

And to sample another grappa coffee; and a cheese and ham waffle – lovely !

Time for us to go but another day which folks will debate for a long time to come – and where we can say; “we were there !”