PEZ Roadside St.21: It’s the end of the Giro d’Italia road for the riders and for Ed and Martin. The adventurous pair were in amongst everything in Milano, roadside, backstage, at the busses and as near the finish line and podium as they could get. It’s the last day of school in Milan. 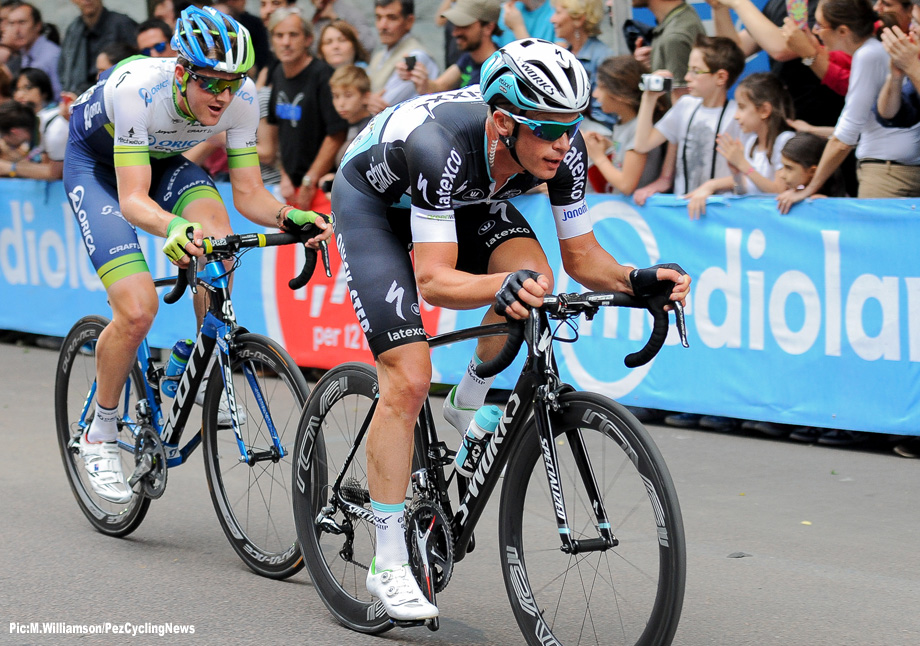 That text from PezAmigo, Ian Whitehead in Gent was how we learned that the man who’s name emblazons a thousand scarves in the Kuipke Velodrome every November at the Six Days of Gent had landed the biggest win of his career.

And we’re here now for the biggest win of his life – maybe we’re lucky for him?

We were speaking to his dad Ronnie, just before the tappa; none of us knew the day would go the way of the Belgian track flyer – but it did!

But let’s start at the beginning. . .

In Verbania the hotel was amazing; from another more refined time whilst in Cervinia the digs were pure ski bum. 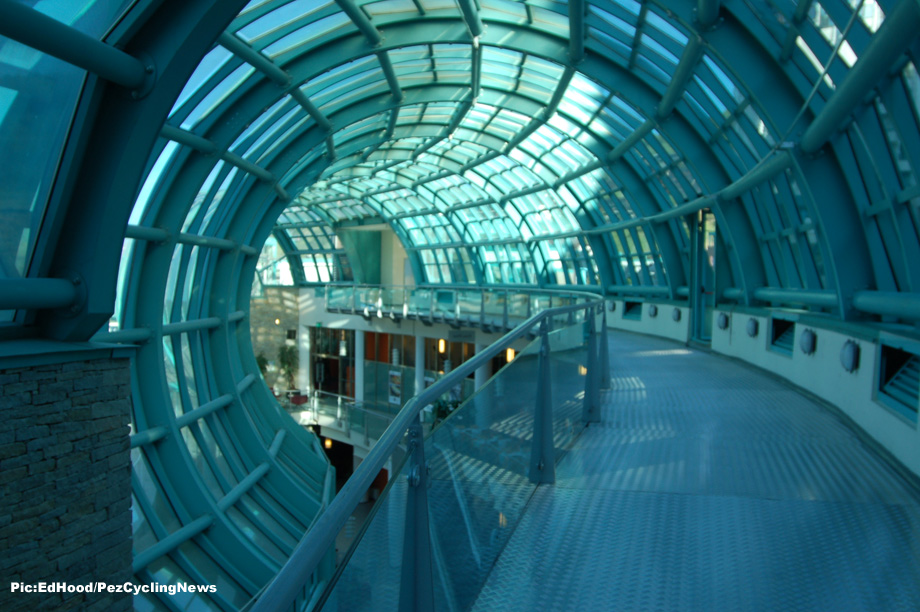 But in Sestriere it was the old Olympic Village which came straight out of a James Bond movie – Sagan would be the hero;

And on the subject of winning; If you’re a sprinter then your daily peruse of the Gazzetta over breakfast won’t have you avoiding the little, ‘La Tappa di Oggi’ panel as you’ll have done for the last week.

The percorso is ‘bella,’ pan flat with ne’er a lump nor bump to disturb it’s horizontal perfection.

Today may be a parade for the GC guys and ‘also rans’ but for the ‘velocisti’ it’s deadly serious – as well as the kudos of winning the Giro’s ‘ultimo tappa,’ the final destination of the red ‘punti’ jersey is at stake.

But there are possible non-Italian interlopers who could crash the tappa win party; Luka Mezgec (Giant-Alpecin & Slovenia) won the last stage in 2014, Moreno Hofland (LottoNL-Jumbo & The Netherlands) is quick – and we liked the look of Heinrich Haussler (IAM Cycling & Australia) in that Lugano finish where Modolo took win number two.

The Australian champion was ‘only’ fourth but finishing very fast when not best positioned.

But our instincts say that Modolo will win the tappa and Nizzolo will secure red. 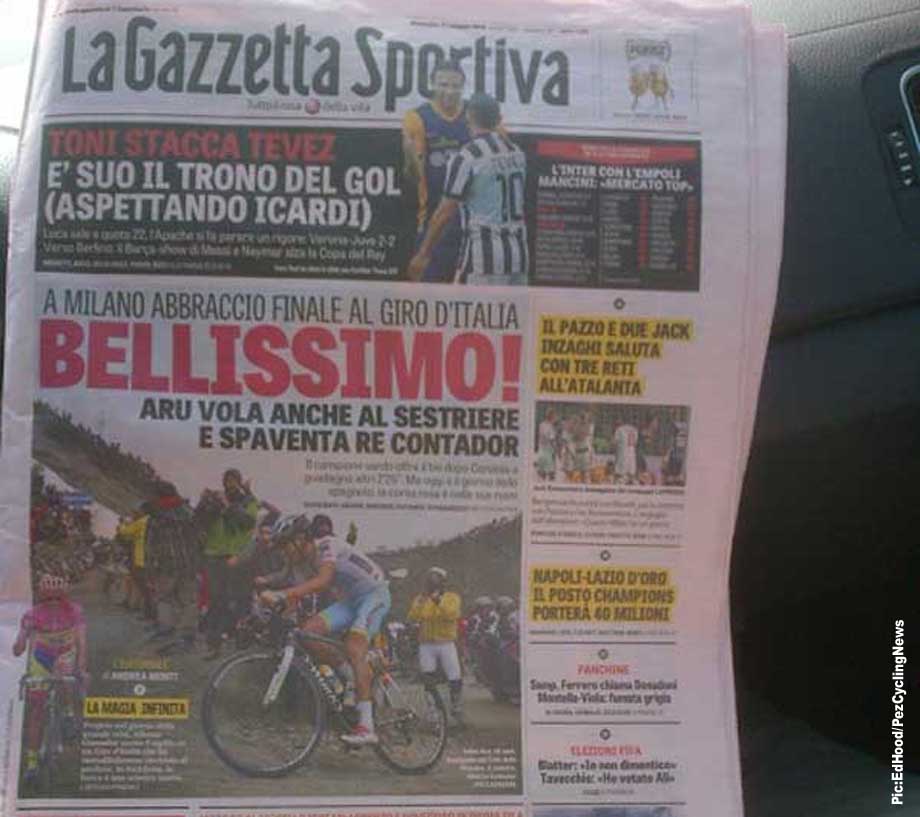 “Bellissimo!” says the Gazzetta headline of Aru’s win in Sestriere.

‘Surprising’ says we – he was clinging on for dear life for days then wins two stages. . .

We’re in Torino now for the start of the last stage – let’s have a look see at what’s happening at the partenza.

It’s the usual chaos around the buses, but hey!

We have a wee bit of time before we have to saddle up and head for Milano so let’s get to work. 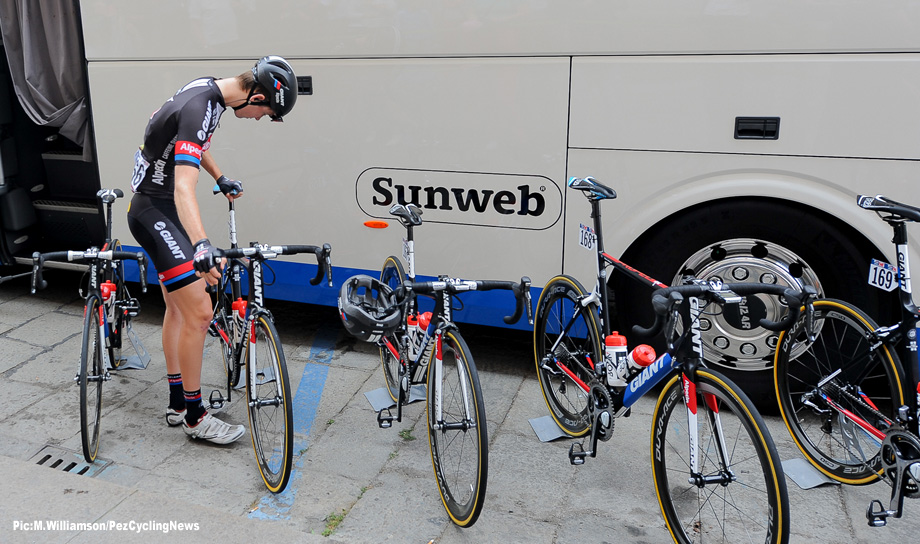 Giant’s tall American Chad Haga is looking forward to riding his last 178 K of this Giro; he thought the Finestre was a ‘cool climb’ – no pushes though, he doesn’t like getting pushed.

The Italian riders have no such reservations, however. 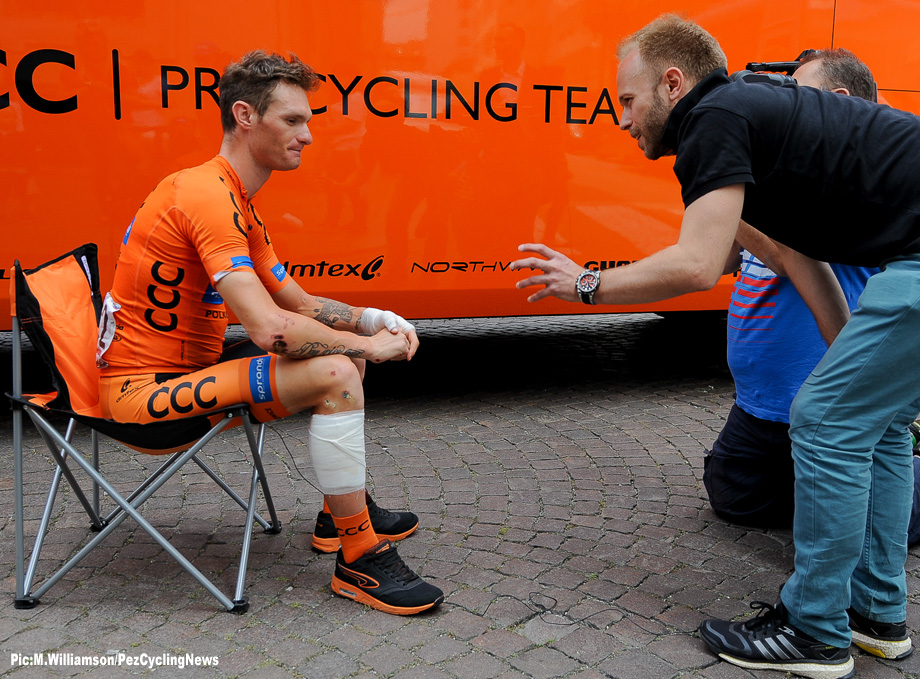 Bole of CCC has been through the wars in this Giro but Polish TV need that footage and bandages or not he has to give them a rap. 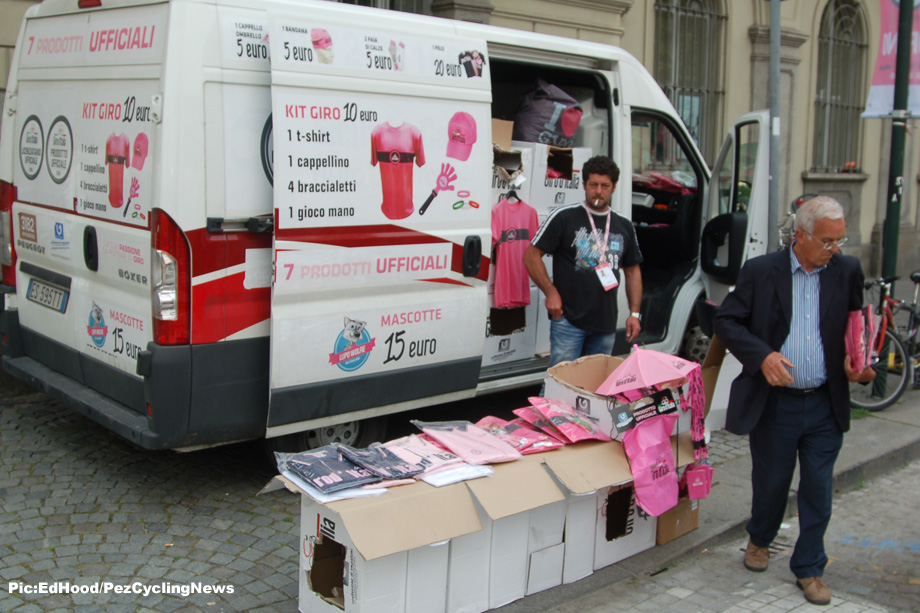 The Giro tat guys are looking nervous; the last stage and they haven’t hit target yet.

They’ll be even more lethal than usual out on the percorso, today. 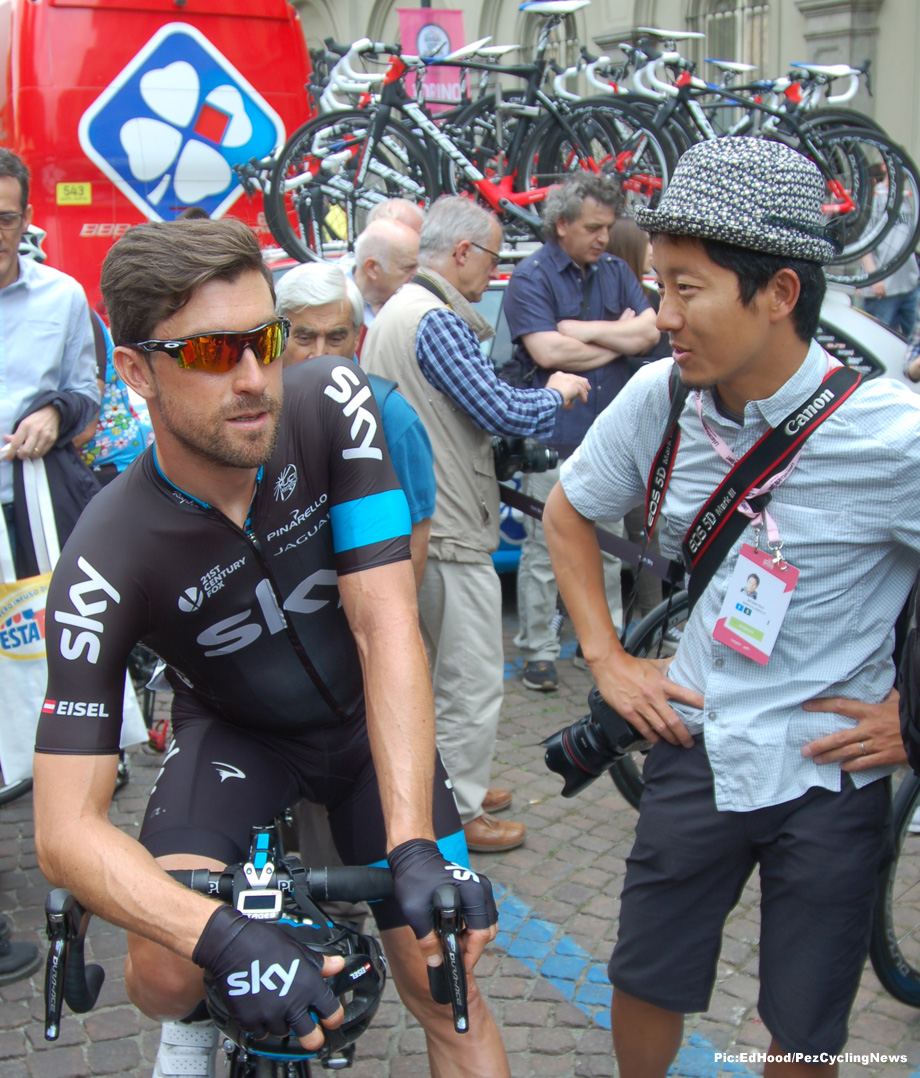 Bernie Eisel chats to a photog, this may be Tappa 21 but there’s not a hair out of place and the stubble length is just right.

Is there a barber’s shop on the Sky bus, too?

When Bernie retires he’ll be a London bike courier with the coolest fixie – no brakes, of course. 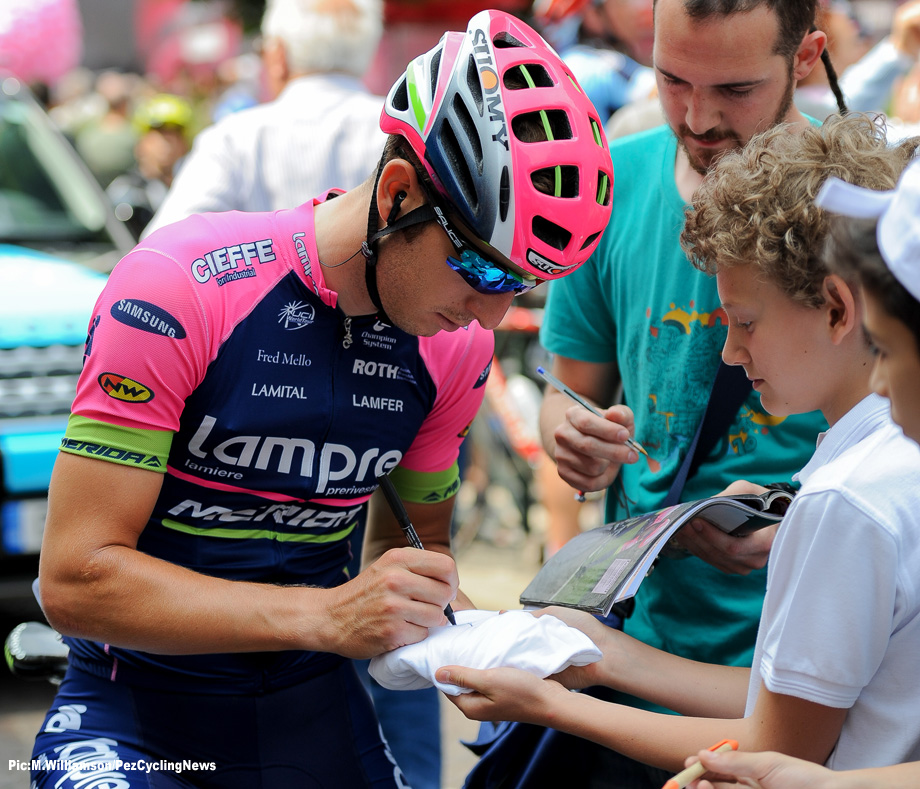 There’s Modolo, well ‘in the zone’ he signs the autographs – he’s a professional – but his face tells it all.

He’s the winner today, for my money. 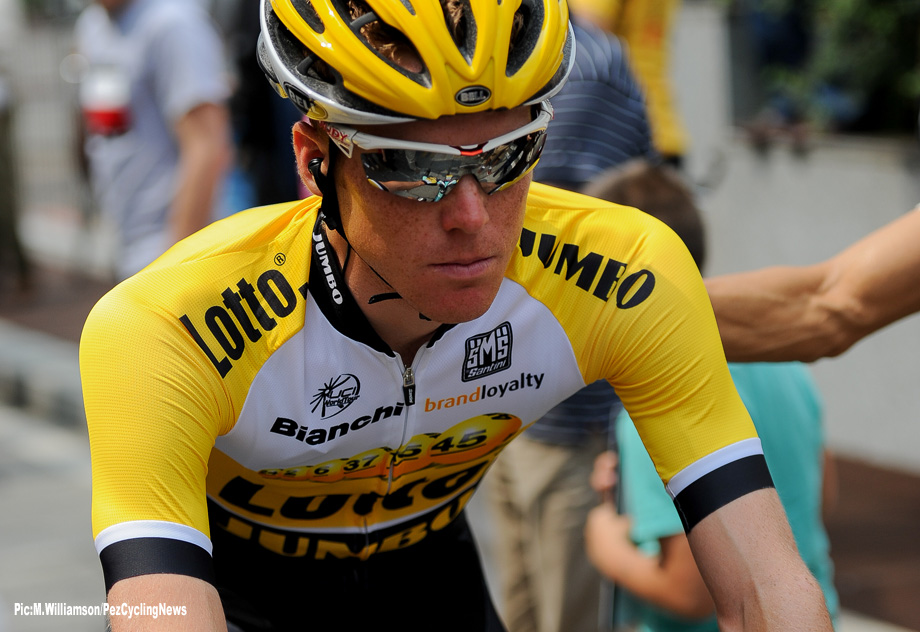 Kruijswijk heads for the sign on; easily identifiable by those big, square shoulders – it looks like the coat hangers have been left in his jersey.

As with Modolo, this has been a breakthrough race for him; albeit seventh is one thing, the podium is another. 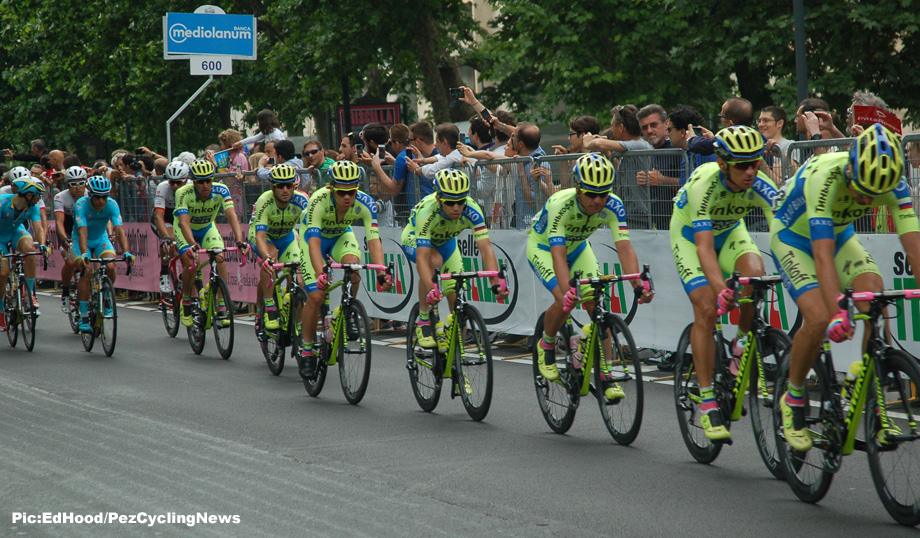 Milano – and half-a-dozen laps of a fast and totally uninspired circuit around the city – as tradition requires Tinkoff-Saxo lead for the first lap. 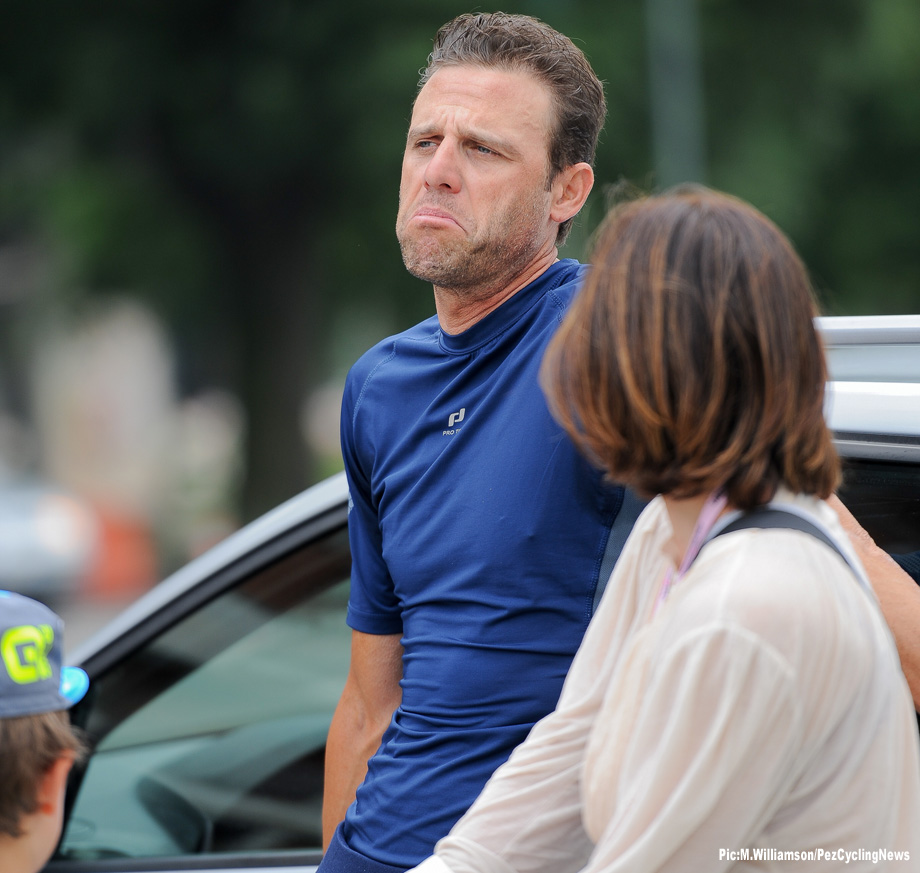 And we bump into the Ale-Jet explaining to a fan why he quit the race, yesterday – a sad end to his Giro days. 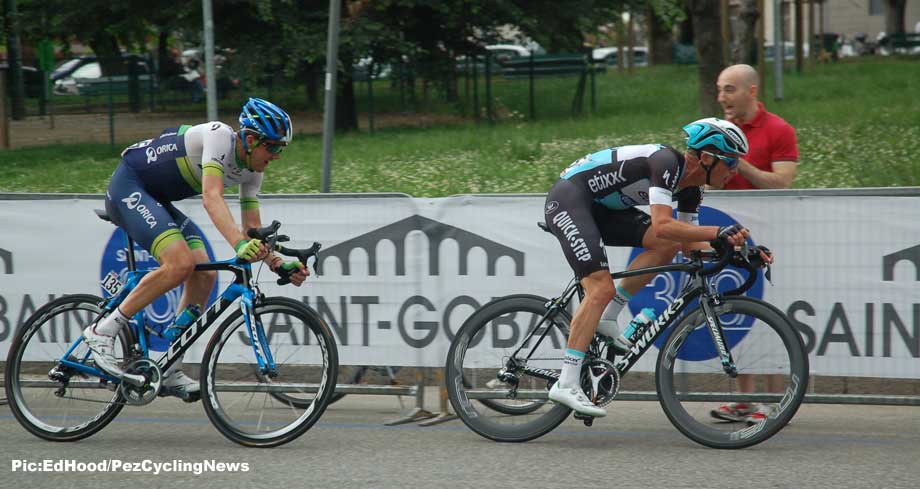 On the second lap there are two away; a GreenEDGE and a Quick-Step – Durbridge we think is the Aussie.

The lap is around five K and they come round QUICK; and it’s Iljo Keisse who’s the Etixx-QuickStep guy; ‘vai Iljo! vai!’

Sky lead for Viviani and the same again, next lap – but there are only a couple of them on the front this time round and it doesn’t look that organised. 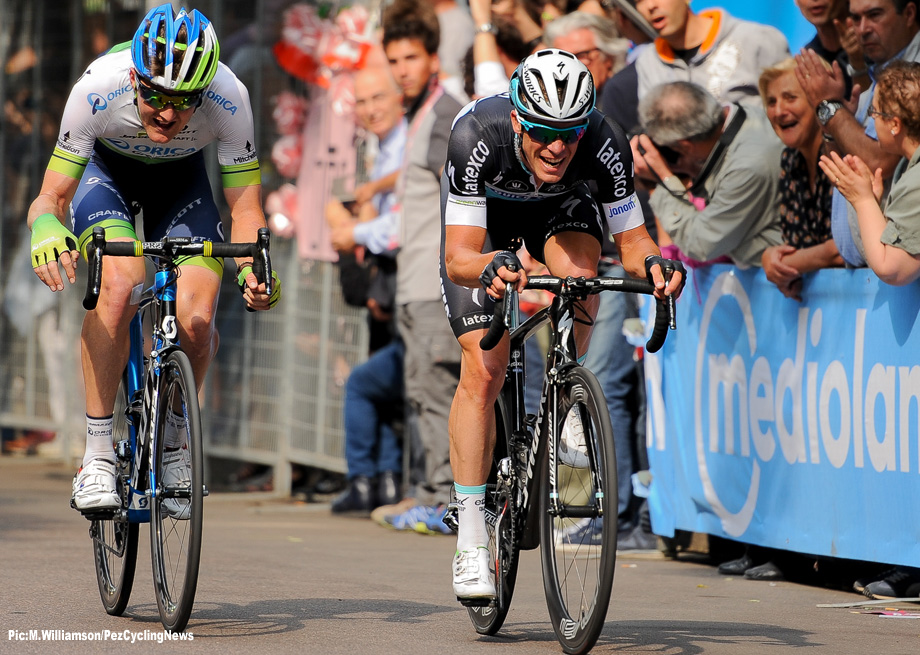 The same can’t be said of the Iljo and ‘Durbo’ tandem who wouldn’t look out of place in the famous Trofeo Baracchi two man time trial back in the 70’s and 80’s – before it entered the history books – they’re big, strong boys and Iljo is as smooth as a sewing machine.

Modolo throws a man in to the chase but the sprinter teams are playing poker; ‘leave it, they’ll chase’ they think – but the others think exactly the same and many riders are running on fumes at this stage.

Meanwhile the two desperadoes don’t play any games – they work their socks off.

‘Ultimo giro!; says the PA on the lead car – they’re going to do it, it’s going to stick!

I’m hopelessly lost round the back of the circuit when the text comes from Ian that it’s Iljo’s day.

It’ll be ‘party on’ in Gent this night.

Eventually I limp back to the car and the bus park – there’s more work to do. . . 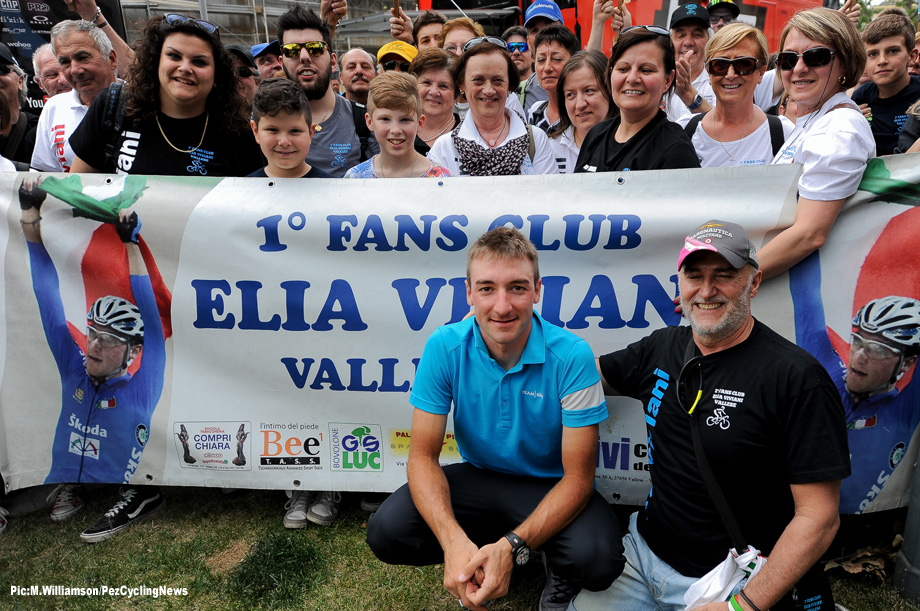 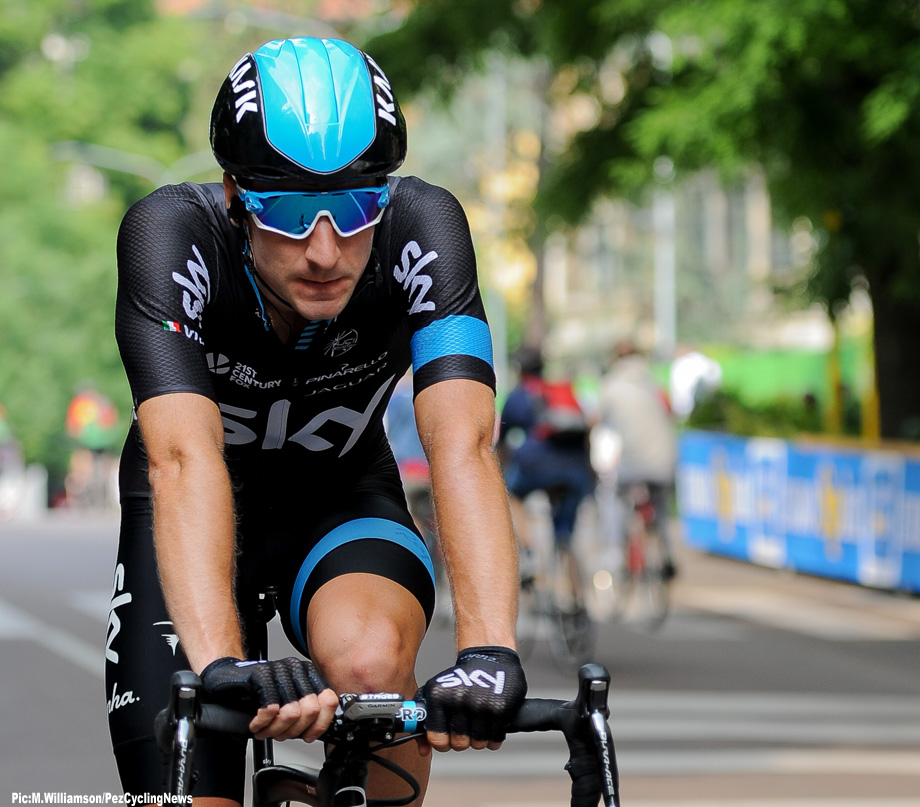 Martin caught a shot of Elia Viviani right after the finish – his face said it all; but he perked up by the time he caught up with his family. 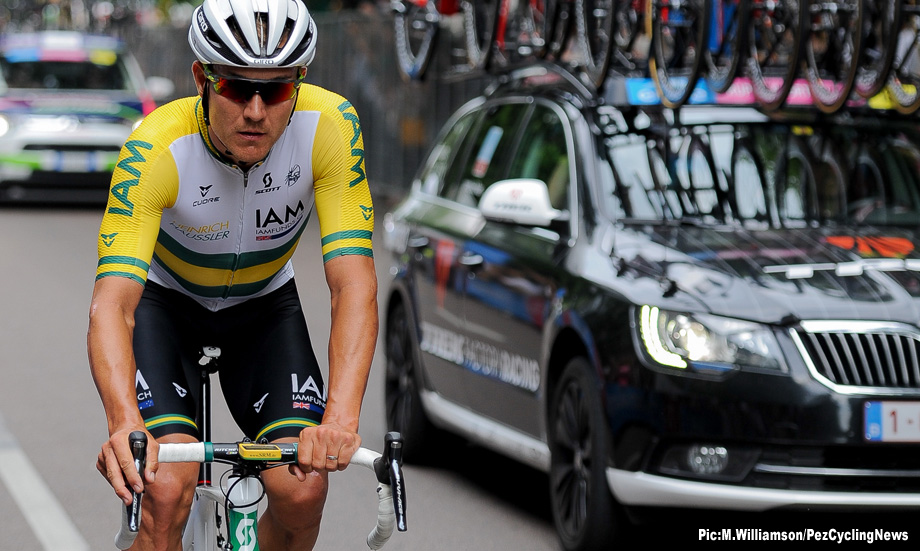 ‘Selfies’ is the name of the game these days with the BMC’s formerly spiky Cadel now a selfie master – and all smiles. 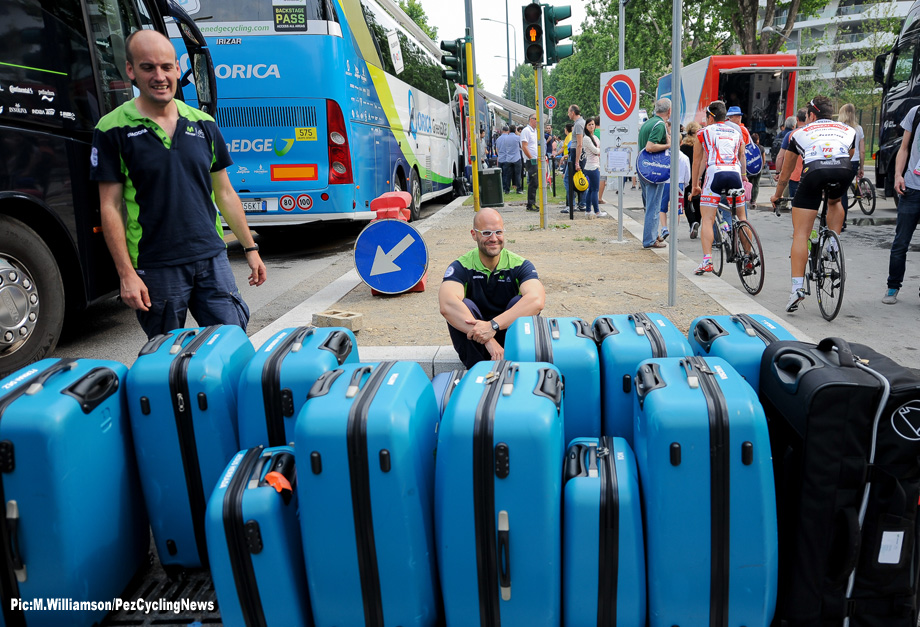 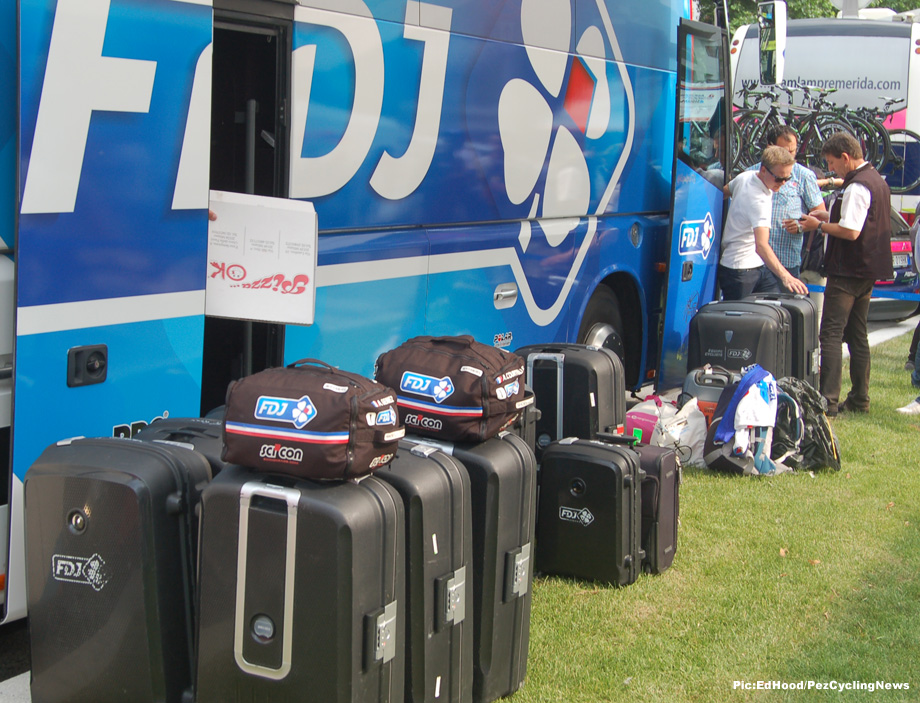 And it really is time to go home; suitcases are stacked neatly outside team buses as the Grand Tour bubble bursts and the Giro and its entourage no longer owns the highways and byways of Italy. 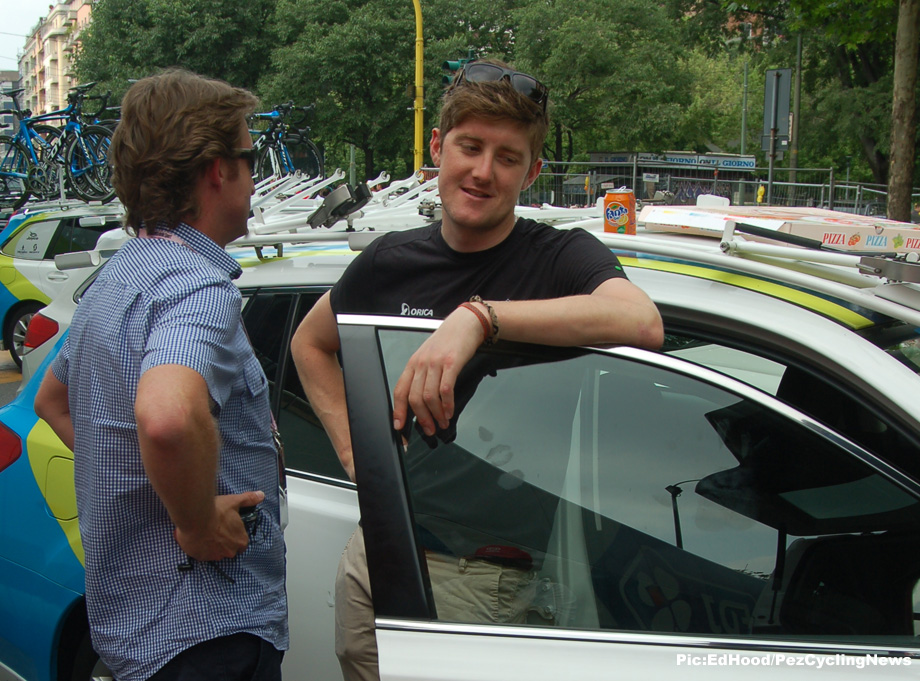 Durbridge is chatting to his Orica-GreenEDGE DS, Matt White behind the bus – he’s philosophical, second on a Giro stage is no bad result and his chances of taking a Kermis King like Keisse in the sprint were slim. 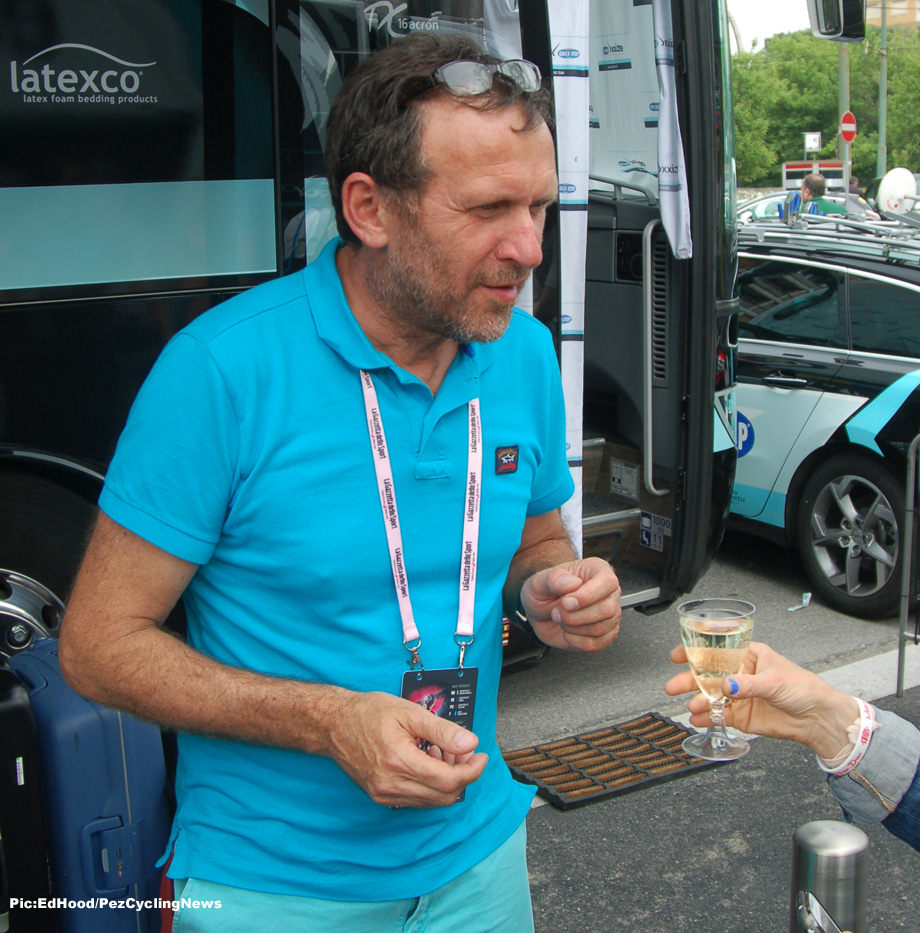 And whilst speaking of the Keisse clan, we catch up with Ronnie again; we give him our congratulations and a hug as he dispenses the champers. 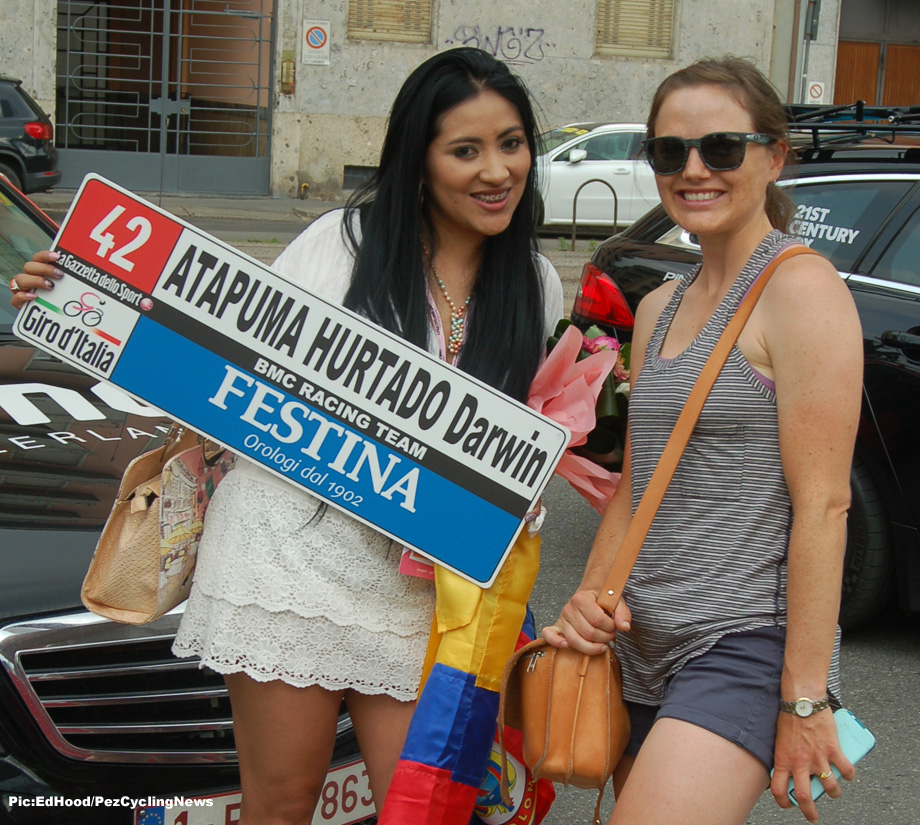 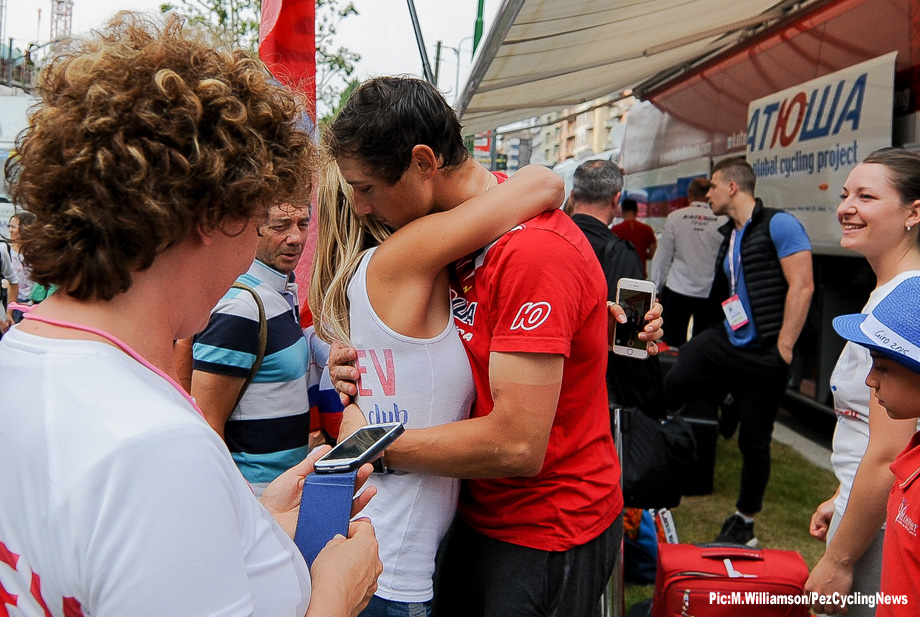 Wives and girlfriends wait patiently for their men beside team buses; Darwin Atapuma’s lady and her friend are happy to strike a pose for PEZ.

Whilst Ms. Porsev is just happy to see her man. 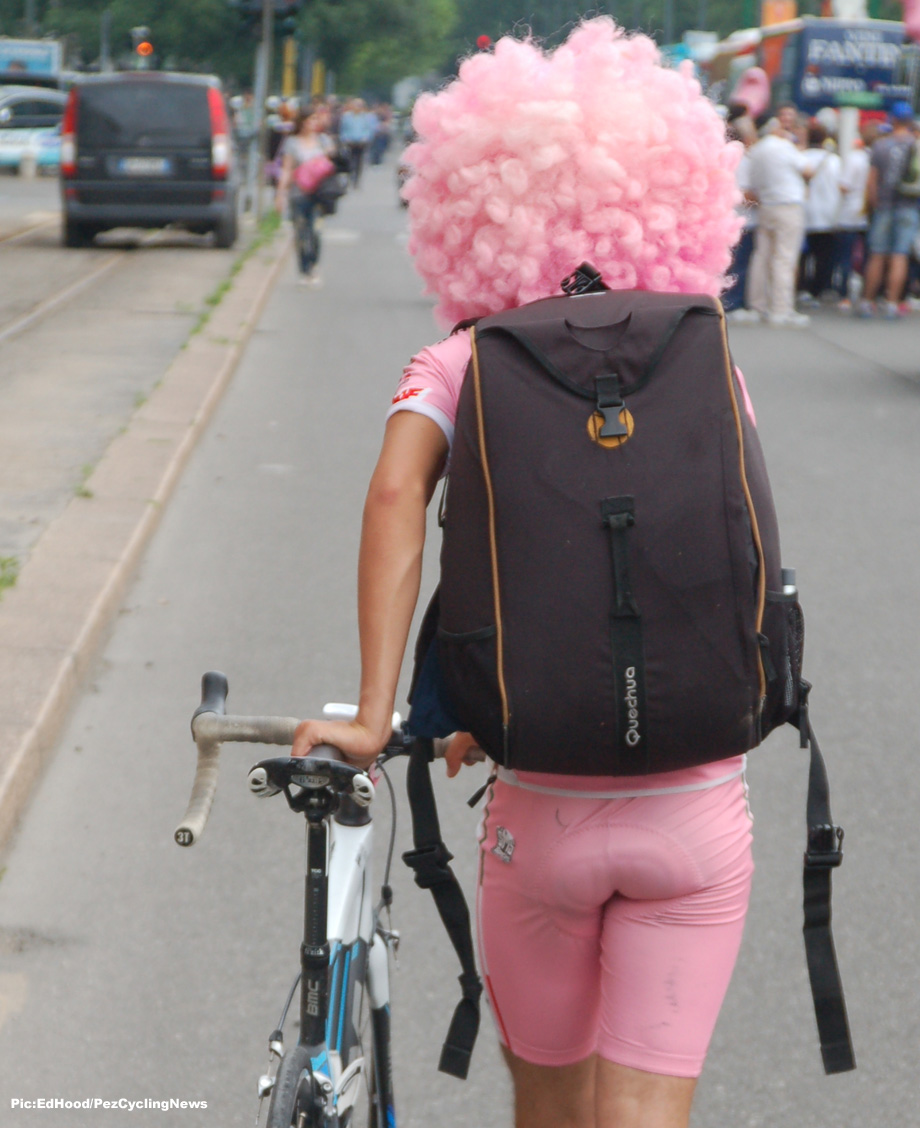 The guy we feel sorry for is the man in pink, no, not Bert, he’s won his third (or is it his second?) Giro – the guy with the pink hair, he’s unemployed for the next year. 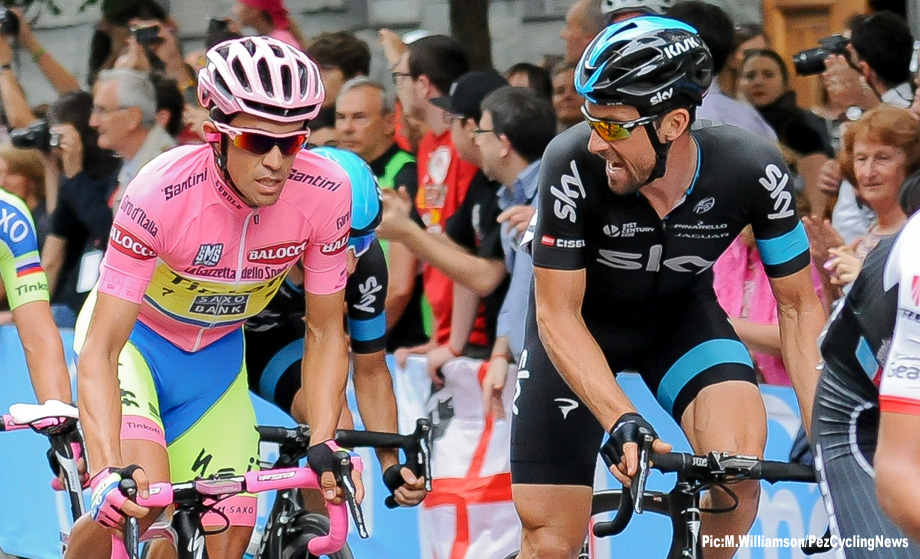 But joking apart, we knew Alberto Contador had the Giro won last night, this day belonged to one man, he saved his team’s Giro and dedicated his win to his late team mate Walter Weylandt. 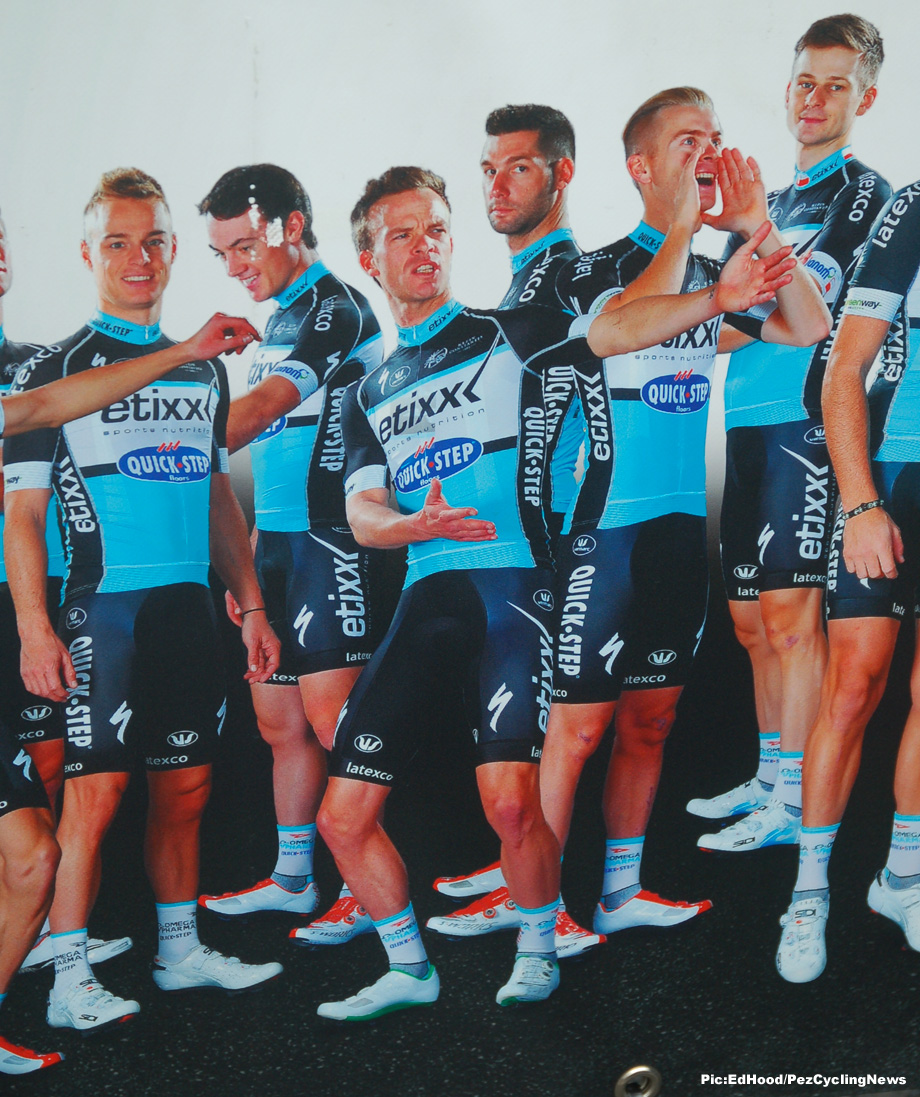 Thank you for reading we hope you enjoyed this Giro as much as Martin and I did.