Ed Hood and Martin Williamson have hit the Italian soil running, only in the country for a handful of hours and they have sorted their creds, seen tomorrow’s route, inspected the bikes and sent us the first words and photos. The productive pair will be on the Mortirolo tomorrow, here is the story so far:

You know you’re in La Bella Italia when – you can buy a Lambo at the airport. 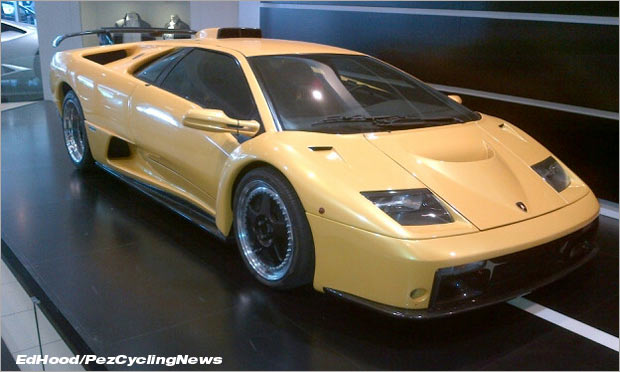 The taxi driver was cool; we both agreed that the roads in Edinburgh were beyond bad and before I knew it, there was Martin waiting patiently at the airport. His father-in-law gave him a run up from Peebles; a cautious man, he decreed that Martin should be there; “in plenty of time, you never know what might happen. . . 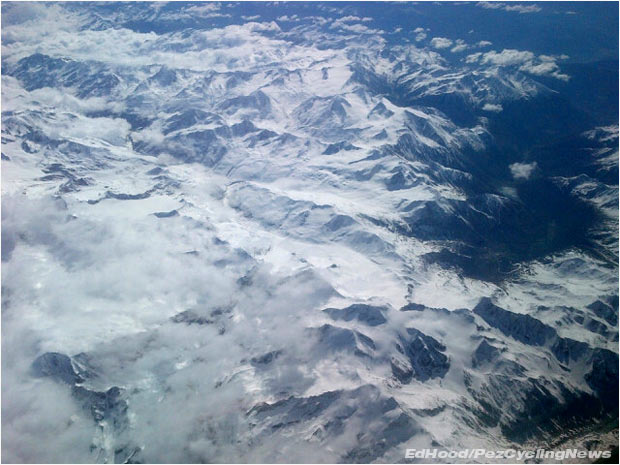 The flight wasn’t too sore and the views of the Alps were stunning.

First up, purchase La Gazzetta Dello Sport, full colour with eight pages of Giro news. But just a postage stamp picture on the front page to acknowledge Landa’s gift from Alberto – but that’s how it is in Italia. They don’t like these foreigners winning their tappas – even if he is Fabio’s team mate. 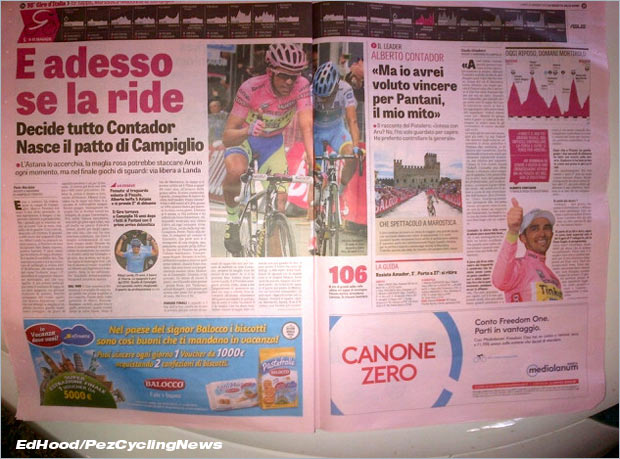 Inside the main picture tells a story; Contador in his best, ‘riding down to the paper shop’ pose gives the photographer the thumbs up as he grabs the bonus seconds – Aru trails, head hung low. 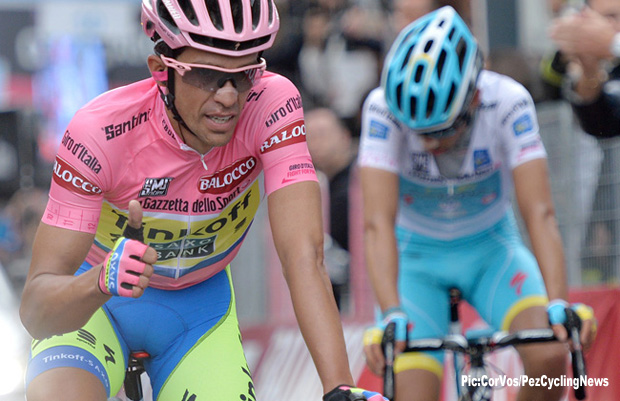 Along the top of the double page spread there’s a summary of all the stage winners. If you exclude the opening TTT no rider has won more than one stage.The ‘usual suspects’ are up there at the top of page 38; Greipel, Tiralongo, Gilbert, Intxausti, Kiryienka and ‘Bert’ in pink. But it’s a Giro which has seen confirmation of two of the new wave of Italian ‘fast men’ – with wins for Sky’s Elia Viviani into Genoa and Lampre’s Sasha Modolo into Jesolo. 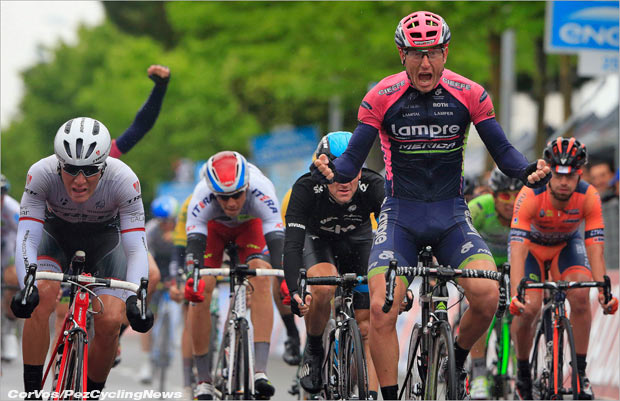 And those Bardiani boys pick up where they left off last year, terrorizing the breakaway stages with Nicola Boem winning in Forli. Boem’s not the only, ‘new kid on the block’ to be making the headlines; if Orica’s young Aussie flyer, Michael Matthews development continues on its current trajectory then he’ll win a Monument in 2016. 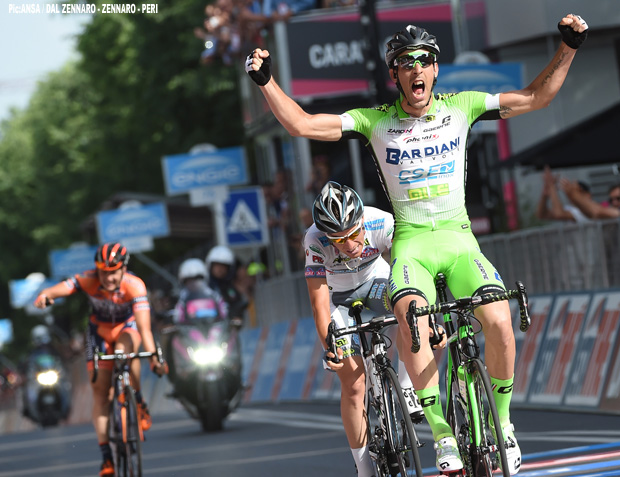 But of course he needs the win bonuses to run that nice Porsche Cayenne down in Monaco – his latest bouquet coming in Sestri Levante. 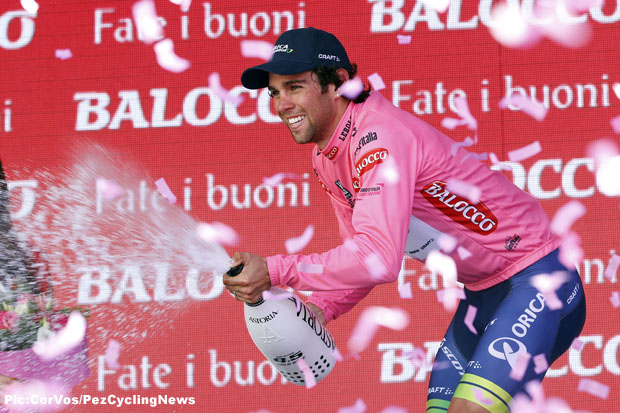 Lampre’s Diego Ulissi won in Fiuggi; it’s taken the Italian a year or two prove that his two world junior road titles didn’t burn all his candles too soon. And Slovenian Jan Polanc is the third Lampre to spray the Prosecco, making this a brilliant Giro for the boys in fuscia, blue and neon green. 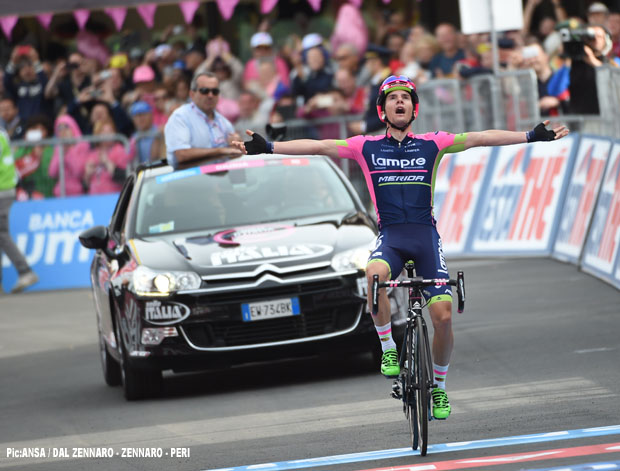 Young Davide Formolo finally gave Cannondale-Garmin something to cheer about with a fine win in Ale Petacchi’s home town of La Spezia. 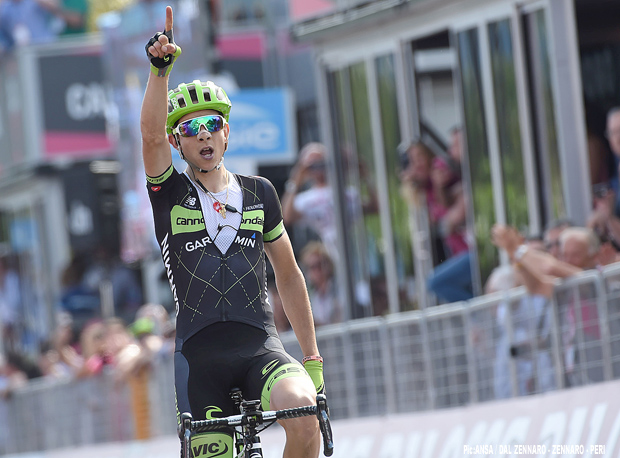 Katusha’s Ilnur Zakarin proved that his Tour of Romandie win was no fluke when he soloed to a brilliant win in Imola – surely ‘one to watch.’ 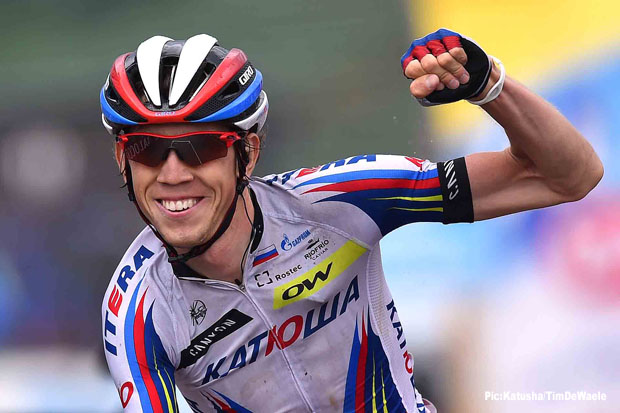 Time for coffee and a panini – and there’s no way you can forget the Giro is taking place.

At the entrance to the Autogrill there’s a point of sale display of pink bound Giro related Gazzettas stretching way back. 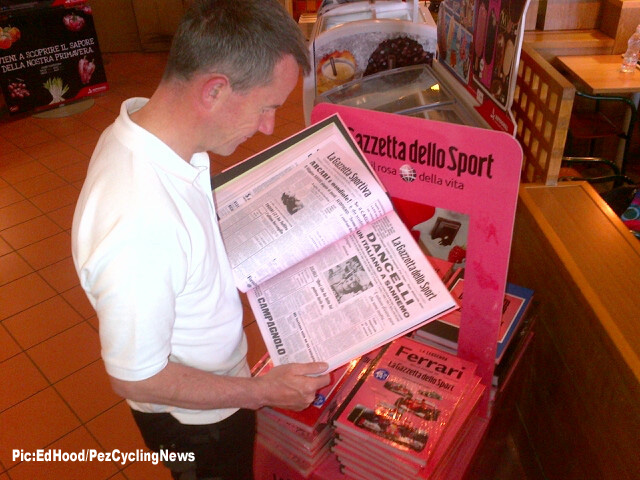 It falls open at the page recording Michele Dancelli’s historic 1970 Primavera win – and there are pages recording Pantani’s glory day in Paris; Felice Gimondi holds the little man’s arm high – so sad it ended as it did. . .

But enough looking back, already! 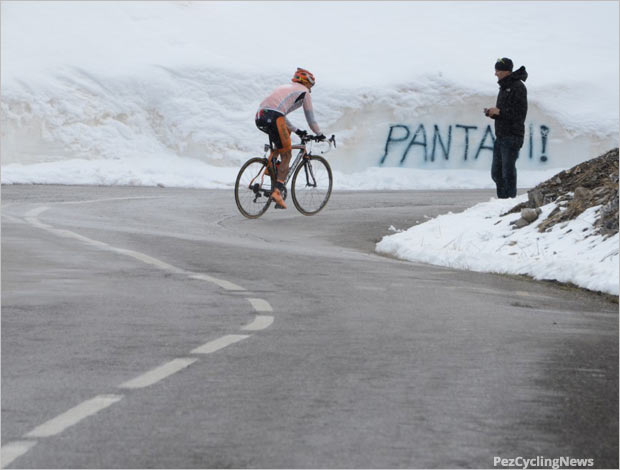 Let’s look ahead to the final six ‘tappe’ – three of them rate on the maximum five star difficulty and the Gazzetta has helpfully worked out that those three stages include 106 kilometres of climbing – that’s wearing well on for 70 miles.

Pinzolo, tomorrow’s start town, here we are; but it seems ‘flat’ – perhaps it’s the calm before the storm? 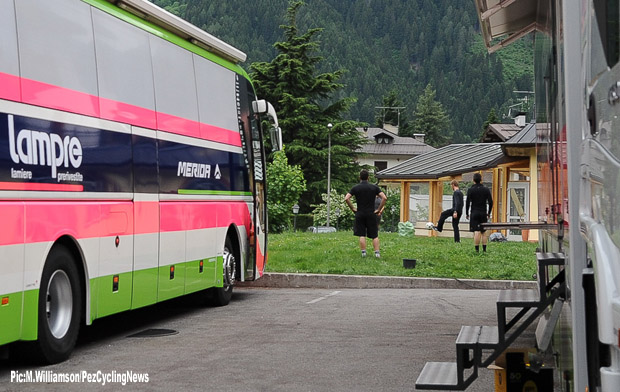 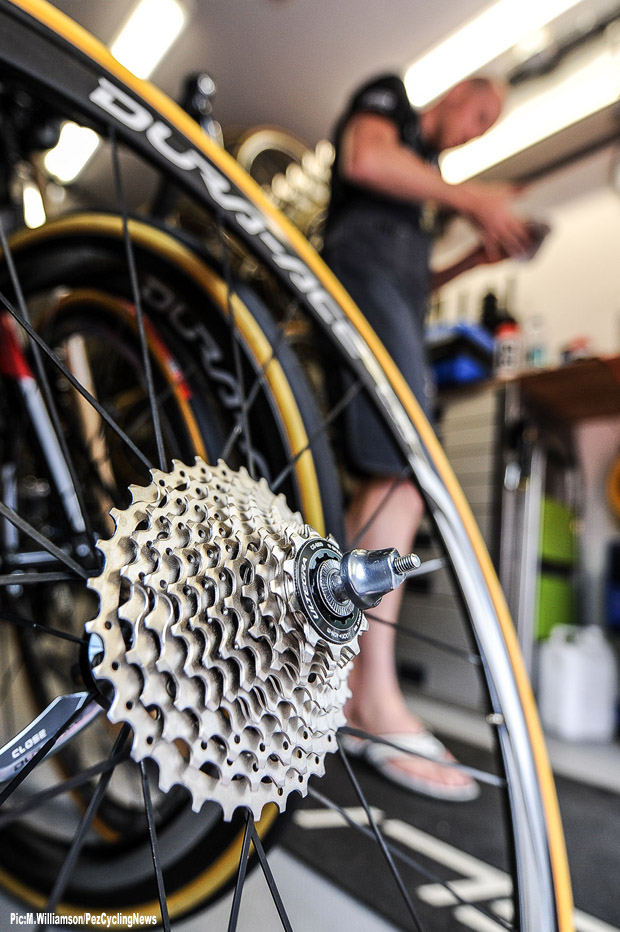 Martin asks if the guys are worried about the time cuts, tomorrow? ‘Always, it’s the Mortirolo, the sprinters worry about that!’

We look for the permanence to get our credentials. Finally we have to admit that Al Hamilton was right and the creds are indeed up in Madonna di Campiglio. 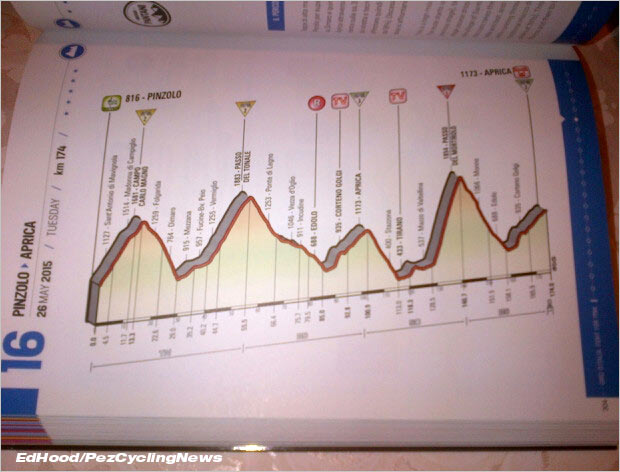 We drive the first part of the percorso to get there – nasty; it climbs from the get go with the stage profile looking like an advert for Sandvik saws. The early break guys will be attacking from kilometre zero; it’s not the day to be a sprinter . . . 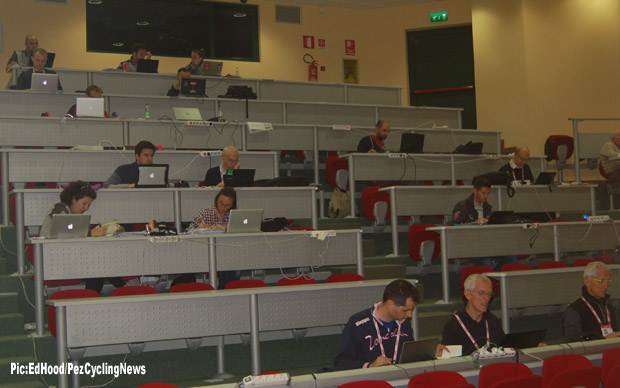 The press room is quiet – it’s as sad as a Johnny Cash ‘Sunday Mornin’ Sidewalk’ in there but the coffee is good and the ladies dispensing the crucial bits of plastic are easy on the eye. Maybe it’s that ski resort without snow vibe that everyone has picked up on ? 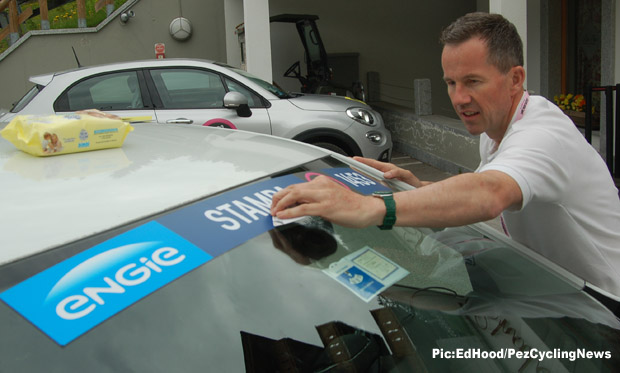 Martin applies the creds and we’re no longer civilians, we’re part of the Pink Race. 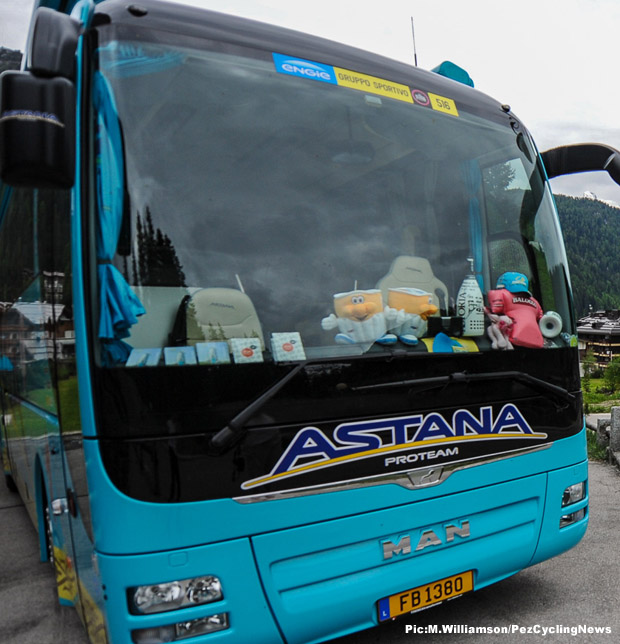 Time to find our bed for the night; but there’s the Astana bus, complete with one Balocco pink jersey in the windscreen and yesterday’s (empty) podium vino bottle, complete with dedication to the team’s bus driver from Mikel Landa. 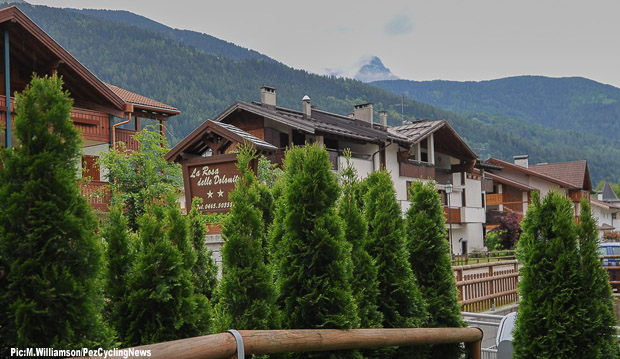 The digs are basic – a ski bum pad, fold down bed, no breakfast but the view is splendid and we’re on the Giro.

Mortirolo tomorrow . . . and for a closer look at what it’s like to ride that sucker – see Pez’s Top Ride here. 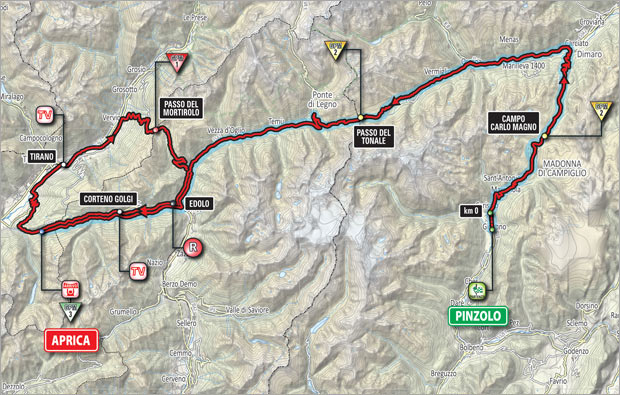