From Calabria to Campania, hilly stage with a fast finale 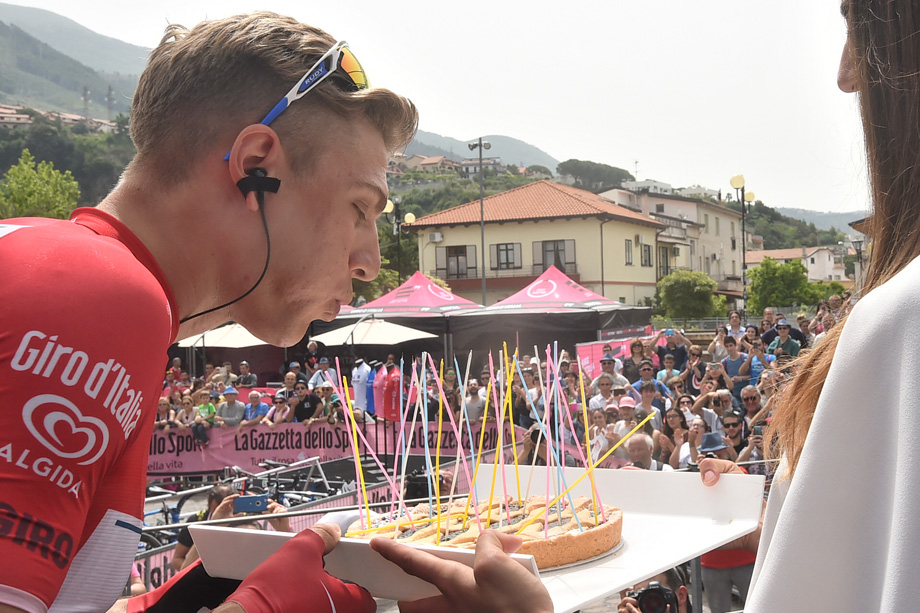 If Tom Dumoulin keeps the Maglia Rosa today, he will join his compatriot Peter Weening on 4 days as Giro d’Italia race leader: 4. Of Dutch riders, only Erik Breukink has more days in the Maglia Rosa, with 8. Weening one stage 5 on 11 May 2011 (Piombino-Orvieto), which took in some of the dirt tracks used in Strade Bianche. 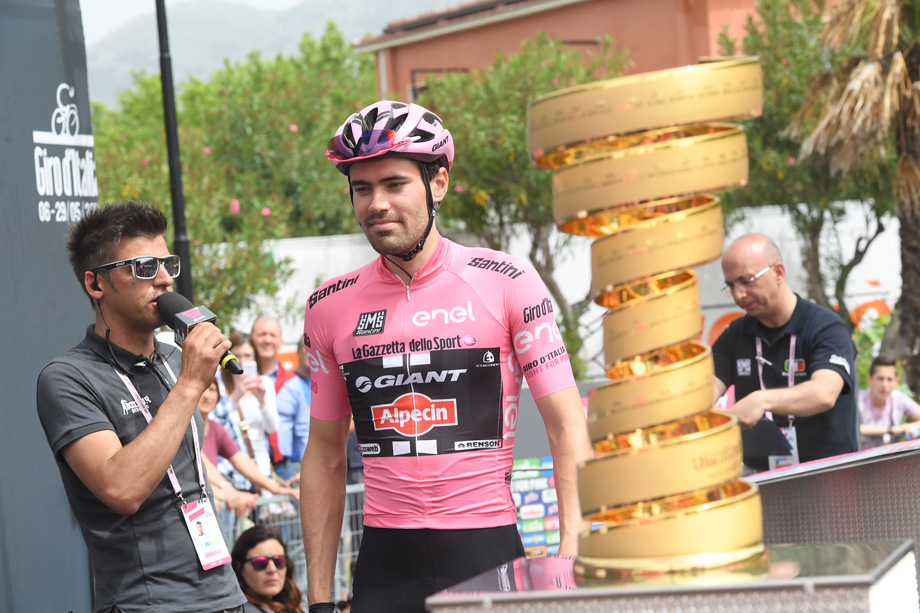 POINTS AND TIME BONUSES
During the stage, time bonuses of 13 seconds are up for grabs. A maximum possible 90 points are available for the points classification, not to mention 7 King of the Mountains points. 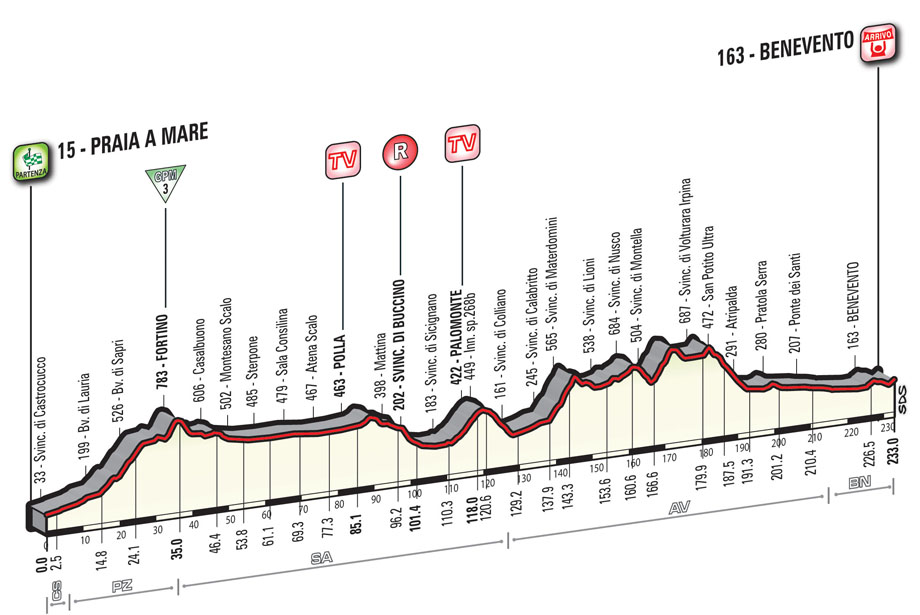 Route
This very long stage (233km) winds its way mostly on fast-flow roads. The first part runs entirely uphill (with milder or harsher gradients), with constant undulations further on, up to 30km remaining to the finish. The final part leading into Benevento runs slightly downhill, until it reaches the city for the last section.

Final kms
The final kilometres run entirely within the city. The first part rolls on wide and straight avenues, climbing at first, and then descending. The second part runs on more narrow and curvy inner streets, with a sharp turn 1,200m before the finish. The home stretch is 200m long and slightly uphill, on a 7m wide porphyry-paved road. 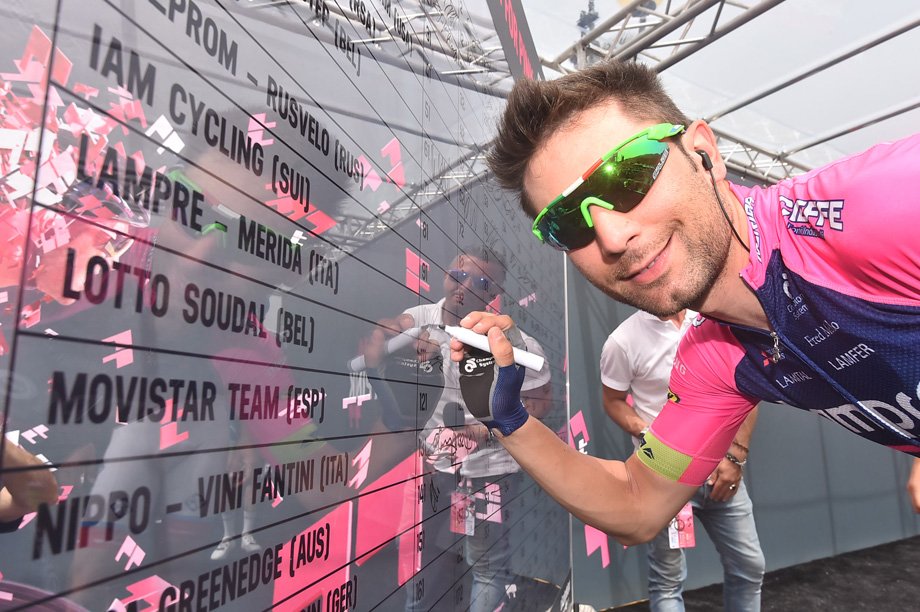 POINTS OF INTEREST
PRAIA A MARE – km 0
Praia a Mare hosts a stage start as well as the previous day’s finish. The route heads north again, but leaves the coastline, cutting inland across a course that’s hilly, but with no major climbs. Tourism began to thrive in the lovely “blue flag” seaside town of Praia a Mare between the 1960s and 1990s. The town is home to a number of military buildings, such as Rocca di Praia, a 14-century fortification built by the Normans.

FORTINO (KOM) – km 37
The route skirts Maratea, Lauria, Sapri and Lagonegro, ultimately reaching the third-category climb in Fortino, the day’s only KOM climb, marking the passage from Calabria to Campania.

MONTESANO SCALO – km 54 and SALA CONSILINA – km 70
The stage course hits Casalbuono, Montesano Scalo and Sala Consilina, amongst the 15 municipalities in the lively centre of Vallo di Diano, as it enters Salerno province. The route runs across the bottom of the valley, among the towns that rise on the surrounding upland of this as UNESCO World Heritage Site.

Sala Consilina-born Giovanni Crisostomo Martini (1852-1922) was an Italian patriot and soldier, and naturalized American. He became famous as he was the only soldier in Custer’s Last Stand who survived the Battle of Little Bighorn (1876), fought between the US Cavalry and the native American Sioux and Cheyennes.
In 1972, Fabrizio Fabbri won the Foggia-Montesano Terme stage. In 1990, Giovanni Fidanza won the stage from Bari to Sala Consilina ahead of Gianni Bugno, Fignon and Mottet.

CALABRITTO junction– km 138, LIONI junction – km 154 and MONTELLA junction – km 167
The route runs across the bottom of the valley and past the villages of Calabritto, Teora, Lioni, Nusco, Montella and Volturara Irpina, on the surrounding hills. This farming region, with lush woodland and chestnut groves, is remembered for the disastrous Irpinia earthquake that struck in 1980, killing almost 3,000 people.

SAN POTITO ULTRA junction – km 189 and PRATOLA SERRA – km 201
Next is San Potito Ultra, home to the “Museo del lavoro” (Museum of Work), then the Pianodardine industrial area, close to the provincial capital, Avellino. The route then runs along the Mount Partenio massif, home to the Montevergine di Mercogliano Sanctuary, reaching the town of Pratola Serra.
The Sanctuary is a monastery dedicated to the Virgin Mary and is listed among the national monuments. It houses the painting of the Madonna of Montevergine, venerated by about one and a half million pilgrims every year.

BENEVENTO – km 233
Benevento has historically been the chief city of Samnium, a region whose proud and brave population fought the Romans, most famously at the battle of the Caudine Forks (321 BC), where Montesarchio now lies. The Roman army was forced to surrender, and humiliated by passing under a yoke, which still stands as a symbol of shame. Major landmarks include the church of Santa Sofia, built in 760, and its monumental complex, which have been listed as UNESCO World Heritage sites; the Castle, also known as Rocca dei Rettori; and the city walls and palaces. 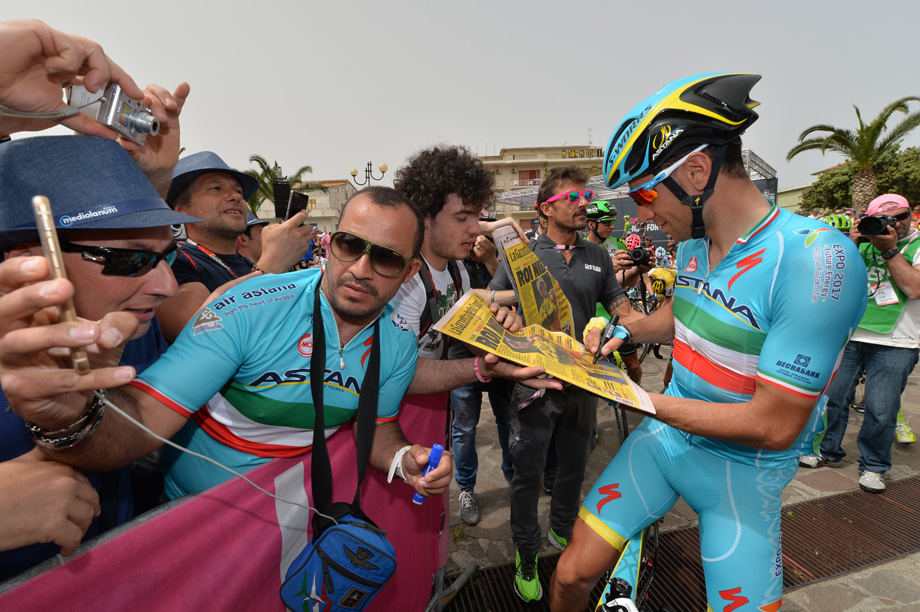 GIRO GREEN
More than 3.000 kg of rubbish were collected yesterday, 65% of which will be recycled: a good early result which will no doubt be surpassed.

ONE Pro Cycling in Pologne