Foligno, 14 May 2016 – Good morning from Stage 8 of the Giro d’Italia, Foligno to Arezzo (186km), a hilly stage given a special flavour by the beautiful but insidious gravel roads on the climb of Alpe di Poti. 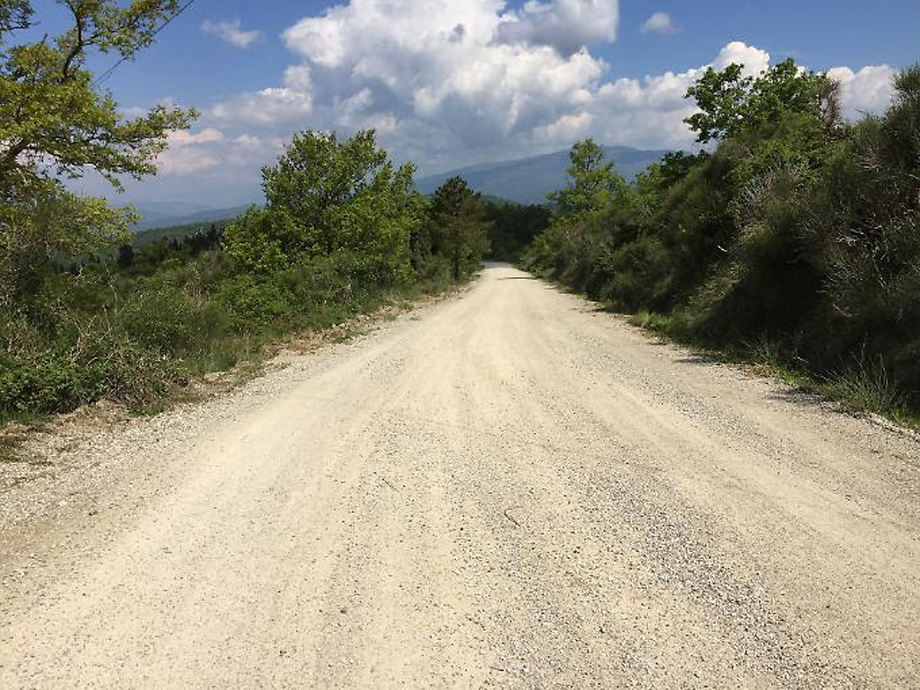 POINTS AND TIME BONUSES
During the stage, time bonuses of 13 seconds are up for grabs. A maximum possible 45 points are available for the points classification, not to mention 22 King of the Mountains points. 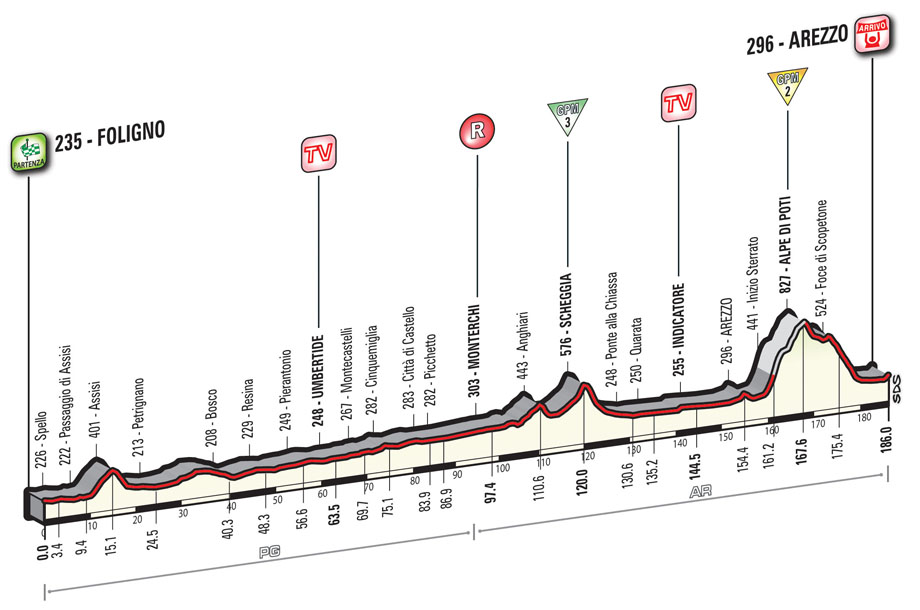 Route
This stage combines flat and mountain roads. The route runs up the Tiber River valley, after rolling past Assisi and Perugia, all the way up to Città di Castello. The roads are quite wide, but with worn out surfaces in places, and narrowing when cutting through urban areas. Just past Città di Castello, the route leaves the Tiber River valley to tackle the steep Anghiari ascent first, followed by the Scheggia categorised climb. The stage course rolls along wavy roads, with a few narrower sectors while crossing urban areas, all the way up to Indicatore (intermediate sprint) and Arezzo. Next on the route, after a first pass over the finish line, is the Alpe di Poti climb, featuring 6.4km on dirt roads, and double-digit gradients. After clearing the KOM summit, the road drops quickly into Foce dello Scopetone and straight into the finish. 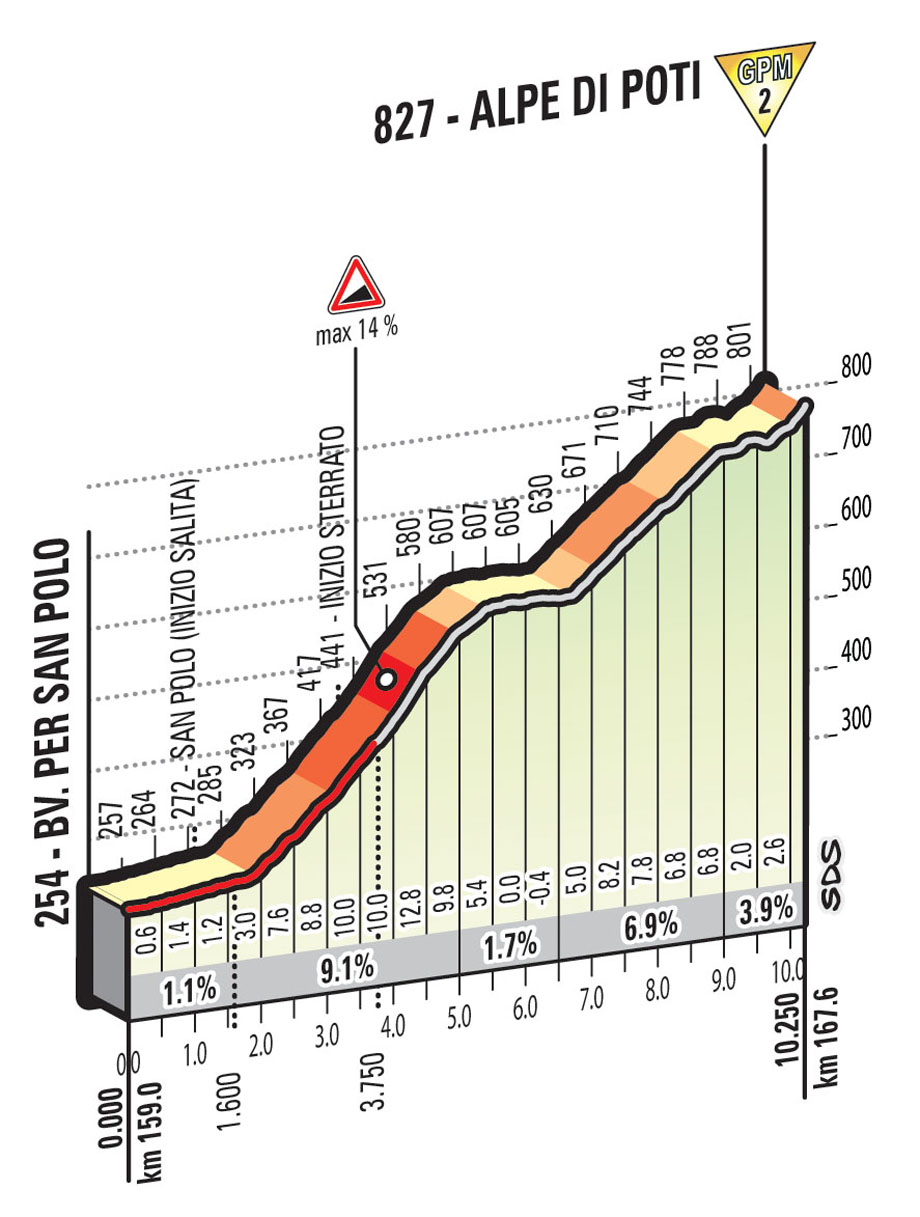 Final kms
The final kilometres run entirely within the city. A fast descent down from Scopetone, with wide bends, leads to the stadium. The route then cuts across the city centre, where traffic dividers and roundabouts will be the main obstacles. After the “flamme rouge”, the route takes two right-hand bends on wide roundabouts, and passes under a mediaeval gateway. A short, steep climb (first on asphalt road, and then on stone-slab paving) leads to the home straight (200m), still slightly uphill (approx 5%), on 6m wide stone-slab paving. 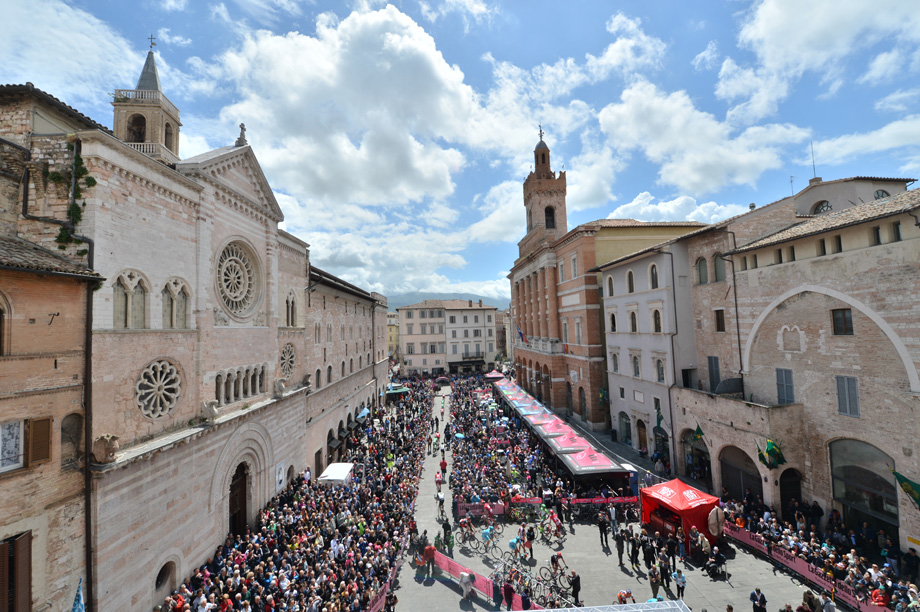 POINTS OF INTEREST
The stage starts from Foligno (Umbria) and finishes in Arezzo (Tuscany), with a very wavy and bumpy profile in the final part.

FOLIGNO – km 0
Foligno hosted a stage start in 1968 and finish in 2014; and was the start city for the Foligno-Assisi ITT, the second stage of the 1995 Giro d’Italia when the Swiss Tony Rominger snatched the Maglia Rosa from Mario Cipollini and defended it all the way to Milan.

SPELLO – km 3 and ASSISI – km 15
Spello, at the foot of Mount Subasio, has a rich Roman heritage and major landmarks such as the Baglioni chapel, with frescoes by Pinturicchio (c. 1452-1513). Next on the stage course is the beautiful Assisi, brimming with architectural and artistic splendour.
Assisi is known as the town of Saint Francis (1181/1182-1226) and Saint Clare (c. 1193 -1253), both of whom were designated patron saints of Italy. The Basilica of Saint Francis has been holding the remains of the saint since 1230, and is a UNESCO World Heritage site.

UMBERTIDE (intermediate sprint) – km 64
The route runs past Piccione, Casa del Diavolo and Resina, and enters the wide territory of Perugia. The magnificent old town rises on the upland surrounding the Tiber valley. Next on the stage course is Umbertide (intermediate sprint) which features a number of remarkable civil buildings and churches, housing paintings by Luca Signorelli and Pinturicchio. The castle of Civitella Ranieri lies 3km from the town, surrounded by a lush wood.

SCHEGGIA (KOM) – km 120
While approaching the third-category Scheggia climb, the route runs through Anghiari, one of the most beautiful villages in Italy. Anghiari is the scene of a battle between the Florentine and the Milanese troops in 1440, that was subsequently portrayed in a painting by Leonardo da Vinci.

AREZZO (passage) – km 154
The city was first settled by the Etruscans, then conquered by the Romans, then after 1000 AD, it thrived as an independent municipality. In the 1289 battle of Campaldino, near Poppi, the mainly Ghibelline forces from Arezzo were defeated by Florence and Siena, securing Florence’s dominance over Arezzo. One of Florence’s combatants was Dante Alighieri.
Two major symbols of the city, the Roman statue of Minerva and the Etruscan Chimera, were discovered during restoration works.

AREZZO – km 186
Arezzo hosts the stage finish. Major landmarks include the Gothic cathedral, featuring frescoes by Piero della Francesca, the 14th century church of San Damiano, with a wooden crucifix by Cimabue, the Basilica of San Francesco, Casa Vasari and Loggia Vasari, Piazza Grande and the Fortezza Medicea. Notable citizens include Gaius Cilnius Maecenas (68-8 BC), “minister” for culture under emperor Augustus, whose name has become a byword for a generous patron of the arts; Francesco Petrarca (1304-1374); Pietro Aretino (1492-1556), poet and writer, and Giorgio Vasari (1511-1574), painter, architect and art historian. 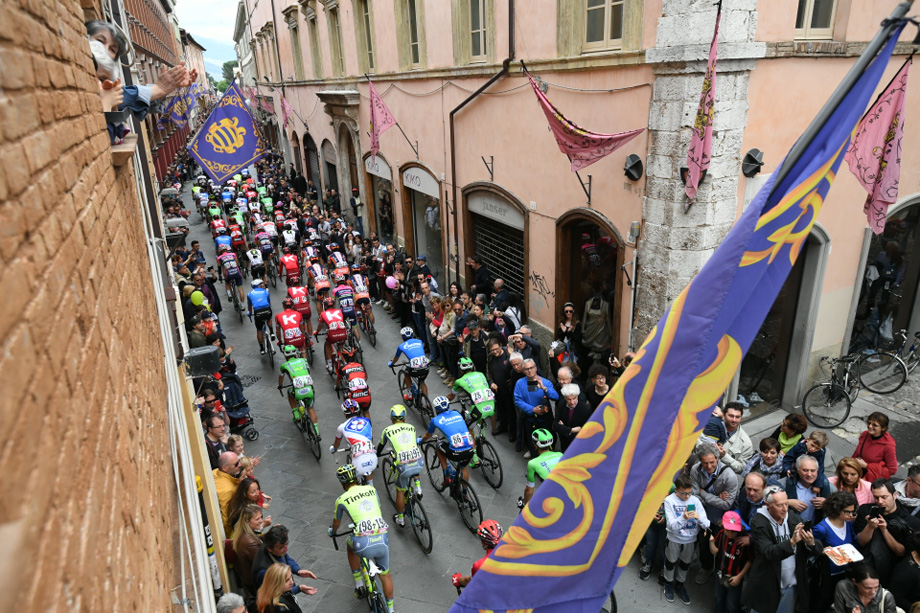 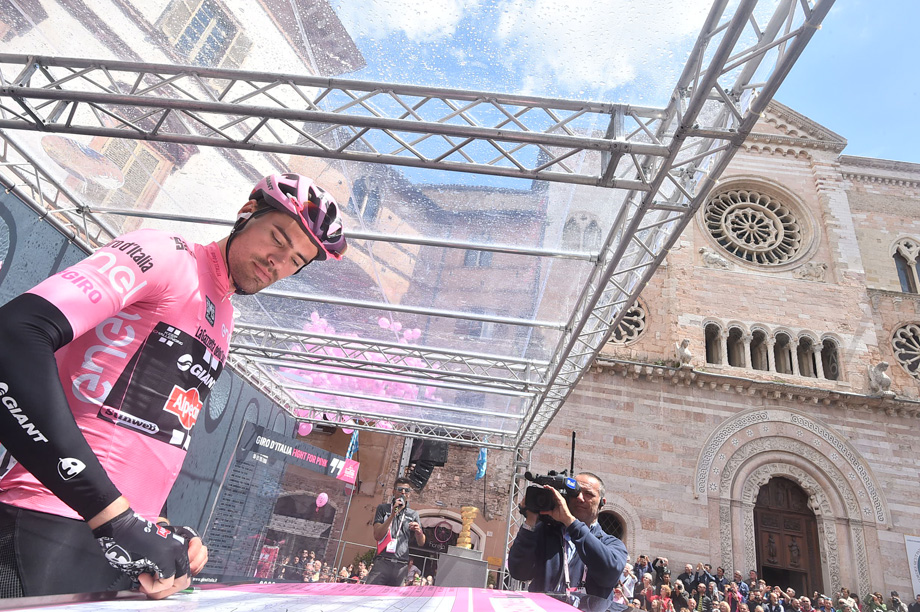 GIRO D’ITALIA – RIDE GREEN
Almost 2.900 metric tons of rubbish were collected yesterday, 82% of which will be recycled: the goal is to achieve over 90% recycling.