Race Report: The supposed breakaway’s day at the Giro turned into a ding dong battle from the go as the stage was raced at extremely fast speeds with the pressure on all day. The win went the way of the returned from his ‘non-suspension’ Michael Rogers after a perfectly timed and executed solo move.

Today’s stage from Collecchio to Savona had been marked down in many rider’s diarys since the Giro route was announced. At 249km with two climbs and most importantly being the day before the crucial 41.9km time trial, logically this should have been the day for a breakaway to succeed. 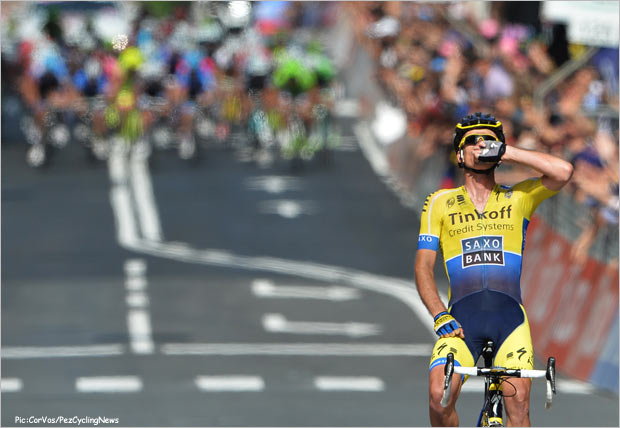 Consequently as soon as the flag was dropped the pace was on with every team trying to place at least one man in every move – it was chaos. Seriously fast chaos. The first hour of racing saw almost 50km covered and despite numerous strong attempts the bunch was still all together after 80km of racing – except for a couple of riders who either didn’t start today (like Michael Matthews) or who had crashed out like Matthew’s teammate Luke Durbridge or Garmin’s Fabian Wegmann.

In fact the early goings of the stage were punctuated by the fast pace and numerous crashes – a theme that would continue throughout the day. 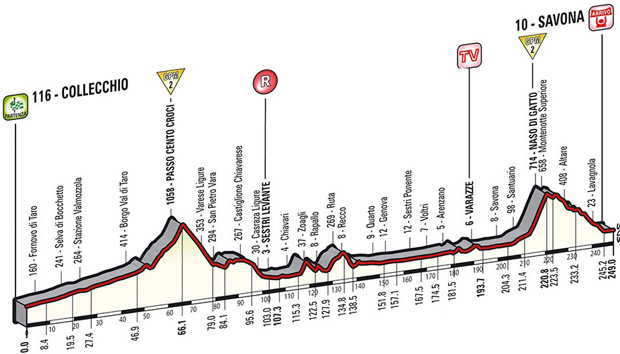 Too hilly for the sprinters & the day before the crucial time trial – Perfect for a breakaway.

It was the French CycloCross champion Francis Mourey who was best placed on GC but at almost 8 minutes behind Cadel Evans, BMC were happy with the composition of the move and they let them go.

With 15 riders in the break normally there aren’t many teams left to chase back in the peloton but with multiple riders up front for Europcar (3), Katusha (2), Bardiani (2) and Tinkoff-Saxo (2) there were in fact 10 teams not represented and so the group never got too far ahead with the lead hovering around the 4m30s mark.

Androni Chases
The team that is normally in the breaks at the Giro, Androni Giocattoli somehow missed the move of the day and their DS was one unhappy man so he sent the whole team to the front to try and bring the move back. From a maximum of 5 minute lead, the Androni boys quickly brought the lead down with some solid work to 2m30s along the flat coastal section of the parcours.

It was at this point then just before the big climb that Philip Deignan punctured out of the break but after a superb chase back he managed to get back on but it was questionable how much energy he would have left for the Cat 2 climb ahead when the attacks from his breakaway companions would surely come.

Meanwhile the chase from Androni continued and after swapping off turns for more than 50km they’d brought the gap down to just under 1m30s but they had just two riders left to do the work as the GC teams started organising their troops for the assault on the hill.

Climb Of The Cat’s Nose
The Naso di Gatto climb or ‘Cat’s Nose was’ now on the agenda and at more than 8km in length and a tough average of just over 8% this is where the action was going to happen in the break at least – and perhaps even from the peloton who were now just 1m15s down.

It was Bardiani’s Bongiorno who attacked first, quickly countered by Nicolas Roche and then followed by Georg Preidler (Giant-Shimano) & Dani Moreno (Katusha). Back in the bunch it was the KOM Points leader, Julian Arredondo (Trek) who attacked out of the bunch as the gap to the break dropped to 40s, a gap that he quickly crossed as he reached the four leaders alone.

Arredondo then stayed with this group for a few hundred meters before deciding that they weren’t quick enough and he attacked again taking Roche and Preidler with him. The pace was too quick for Roche who was soon dropped and Preidler was at his limit but putting in a great ride, just hanging on to the coat tails of the little Colombian. 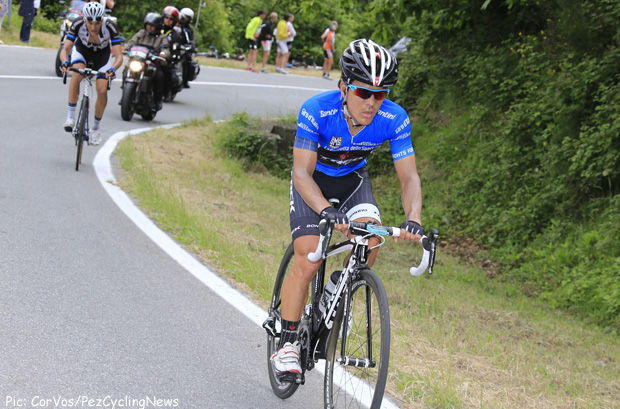 Over the top of the climb it was Arredondo who took maximum points ahead of Preidler and a small counter attacking group that included Pierre Rolland but with the gap at only 20 seconds the BMC led peloton soon had everything back together and it looked for a moment that with just 25km of mostly downhill kilometers to go that we could have a small bunch sprint on our hands with 45 riders still left in contention for the stage.

Rogers Goes It Alone
One man that was amongst those 45 but that was never going to win the sprint was Michael Rogers and the former World Time Trial Champion saw the perfect occasion to attack alone for the win. On the first, more technical part of the descent Rogers quickly built up a lead of 20 seconds taking all the risks with BMC back in the peloton seemingly happy to see him ahead. 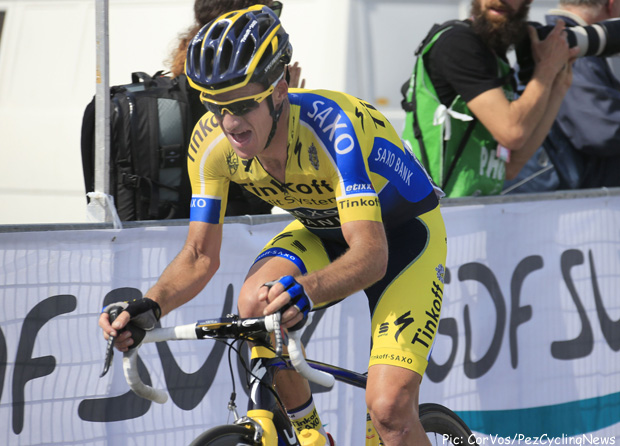 There were still a few fast men in the group like Simon Geschke (Giant) and Enrico Battaglin (Bardiani) but the problem for them was their lack of teammates with any energy to bring back the flying Rogers. Still Battaglin had Zardini who came to the front and did his best as did Preidler for Geschke but they were both too tired and not making many inroads into Rogers’ lead which had now gone up to 40 seconds.

Two To Go – 20 Seconds
Rogers was still doing a great job out front but the length of his solo escape and the high pace of the stage was taking its toll and his lead had dropped to just 20 seconds with 2km remaining. Preidler was still giving it his all on the front of the chasing pack but when he swung off there was noone else willing or able to chase and just when it looked like Rogers might actually be caught his lead ballooned back out to 30 seconds and the win was his.

Coming into the line Rogers was able to sit up and savour the moment of the victory which would actually be his first in two years after his now infamous Japan Cup last year was struck from the record after his Clenbuterol positive test. Let’s just hope Michael didn’t have any dodgy steaks last night… 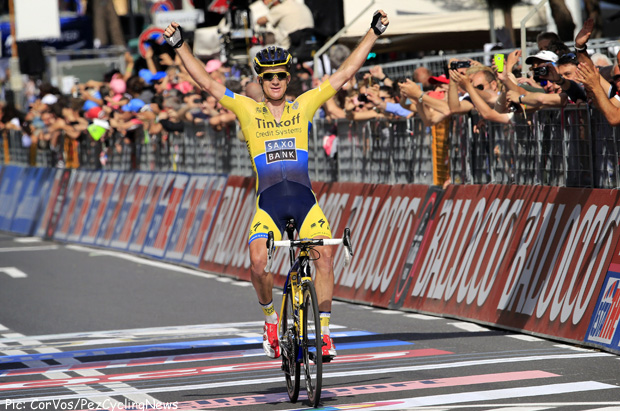 Back in the pack it was indeed the two supposed fastest men left, Geschke and Battaglin who led the group in with Wilco Kelderman (Belkin) and Gianluca Brambilla (OPQS) rounding out the top 5.

No big changed in the overall as all the main favorites managed to finish in the chase group although their hoped for easy day before the time trial turned out to be anything but. There should be some very tired legs on the time trial bikes tomorrow and some big changes in the Top 20 on GC by the end of the day. Keep it PEZ.

Albany a Treat for Big Crowds