Race report: If you’re going to have a bad day, you might as well have it when the Giro is all but won. Alberto Contador proved that he has a champion’s head as well as heart and brains, hanging tough through a crisis on the Colle delle Finestre. Fabio Aru gave it everything but came up a good two minutes short. The Giro is won!

As Contador uncorks the prosecco, it’s hard to say who is happier and more relieved – the Giro winner-in-waiting, or Tinkoff-Saxo boss Oleg Tinkov, who gets a celebratory deluge! 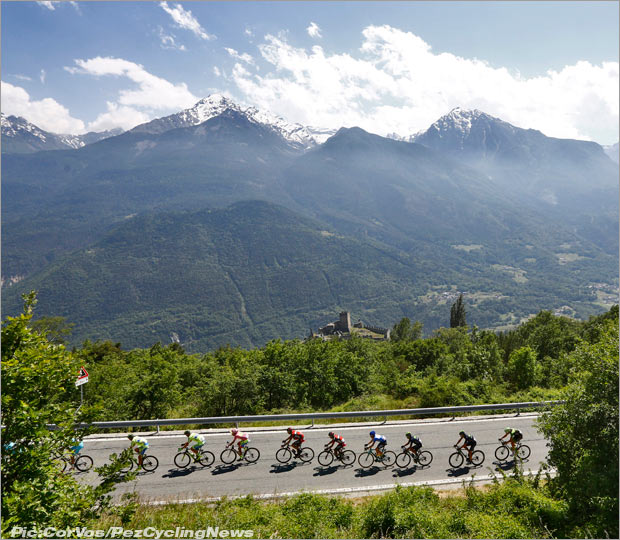 There are only two big climbs today, but they’re beasts. Coming in the last 45 kilometers, it’s the adrenaline spike of the Colle delle Finestre, a plunge down to Pragleto, and a final haul up to Sestriere. 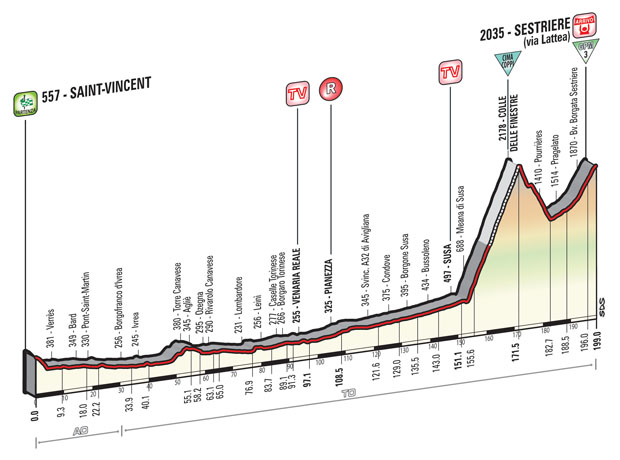 It’s a quick start again, painfully quick after three weeks of racing, and the escapees never get much more than two minutes clear. That’s pretty much it until the base of this year’s Cima Coppi, the monstrous Colle delle Finestre – the break rolls along, and finally LottoNL-Jumbo put a man to work alongside Tinkoff-Saxo.

Inside fifty to go then, and Berlato is the first to attack from the break as the stage heats up. Overall leader Alberto Contador, still has Kreuziger, Rogers and Basso with him, but Fabio Aru (Astana) has practically his whole team around him.

Up front, Zakarin is now leading with Pirazzi chasing, and the main field is closing in as we go past forty to race. Astana have to try something to change the overall picture, and they send Kangert away.

The front group splits and suddenly Contador is totally isolated – he’s got it all to do himself as Astana are mob-handed. 35 kilometers to go: Zakarin is solo, at 1’30” clear of the maglia rosa group, and the young Russian hauls himself onto the dirt roads at the top of the end of the world. 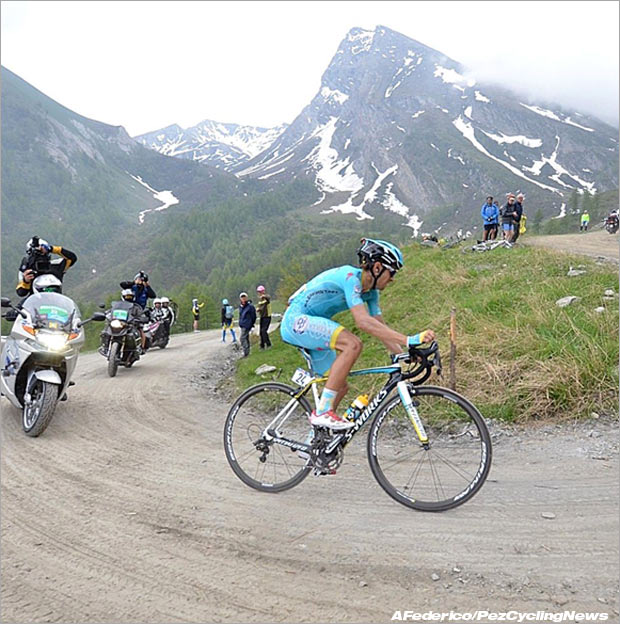 Steven Kruiswijk is going for the mountains title, and his work has reduced the front group further dropping his main rivals from Movistar, Giovanni Visconti and Benat Intxausti. 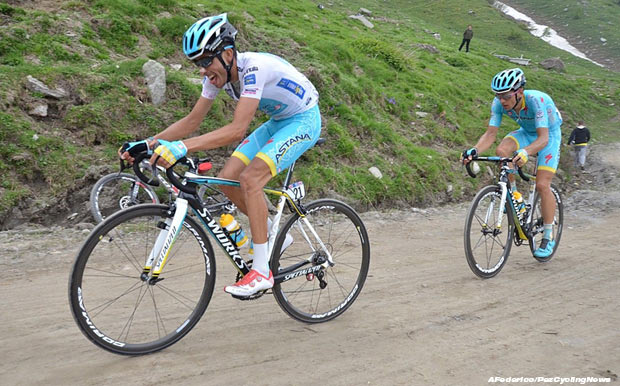 The Basque is closing quickly on Zakarin, and we’re about one-and-a-half clicks from the top of the Finestre. Hesjedal now attacks, inside 29 kilometers to race, and everyone responds … except Contador. Is this the pivotal moment in the Giro? 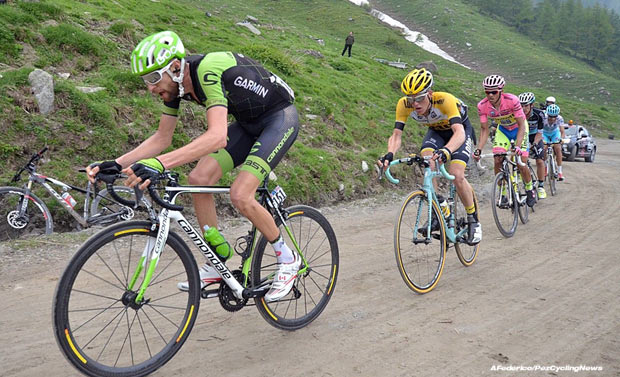 Landa is first over the top, with Aru and Hesjedal in close attendance. Contador is really struggling, trying to stuff food in and over a minute behind. Crisis?

Everyone is hammering down the descent, full gas. It looks like Contador is holding a gap at about 50 seconds – Uran isn’t going to help Aru and tries to force him to do the donkeywork. Landa and Zakarin have about a minute on Aru and co., and 1’33” on Contador at the bottom. If the Spaniard really is in trouble surely Landa should wait for Aru and throw everything at winning the overall?

Contador not panicking as we head up towards Sestriere; all sorts of scenarios being discussed and battled over. The overall win – Contador or Aru? The stage – are Zakarin and Landa doing a deal? The mountains – can Kruiswijk get enough points to win that one?

Twelve to go: Contador picks up Astana’s Kangert and he’s losing time at 1’39” back. Oleg Tinkov possibly contemplating merry hell if it all melts down.

The Spaniard picks up the pace, but ahead so does Aru – the Sardinian pretender is up to Landa, so we have six ahead now (Aru and Landa, Zakarin, Uran, Hesjedal, Kruiswijk). It’s a minute to Contador, so the Astana boys are going to have to pull out a miracle.

Eight to go: it’s Landa and Aru, with Uran, Kruiswijk, Zakarin and Hesjedal as passengers. Contador is hovering at 53” so the Giro is still safe … for now. The Basque climber Landa is doing the best job he can, and even if he’s likely to be packing his suitcase and heading elsewhere at the end of the year, he’s not holding back in service of Aru.

Six to go, and the gap is out again, to just a snip over a minute – Contador’s got Kangert like a dead weight on his back wheel. Up front Zakarin is dropped and has a bit of a chinwag with his DS Dimitri Konyshev as he just hits cruise mode – looked like a chain problem rather than a legs problem. Contador is just having to do a solo time trial, as Aru takes over on the front of the race.

As the maglia rosa goes under five clicks to go, the deficit is 1’15” – about 500 meters on the road. The Astana duo Landa and Aru swap turns, and it’s up to Hesjedal, Kruiswijk and Uran to save as much as possible to go for the stage … or the mountains title in the case of the Dutchman. As the leaders head for the three kilometer mark, Contador is not panicked. He’s losing time, now over a minute-and-a-half behind today, but the race lead is still safe. 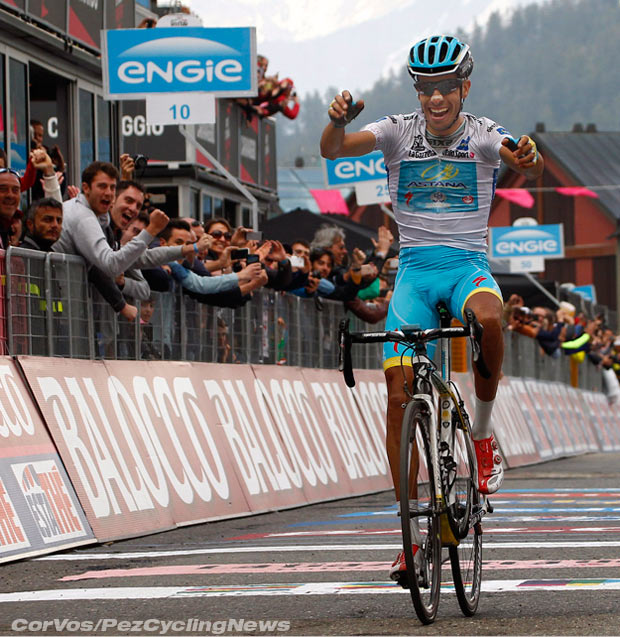 Two to ride, and Aru goes for it. Hesjedal can’t quite close up and Uran has to go past him. The Colombian sits on the wheel, and then Aru goes again, with 1.5 to go. The young Sardinian is flying to a second consecutive stage win – it’s not enough to unseat Contador, but it’s enough for his fans.

Hesjedal grinds away for second on the day, as Landa classily allows Uran to come third. Contador comes under the red kite as Aru is already towelling down. It’s been gutsy from the Spaniard – he had to stay cool, and Kangert respectfully drops back to the other side of the road. Contador punches the air as he comes home 2′ 25” back, zips up his pink jersey … and waiting for him is his boss Oleg Tinkov, who plants a big kiss on his rider’s cheek.

Contador had his bad day, but he had enough time in hand to roll to the finish and save the Giro. That’s the mark of a champion – take time when you can, and take the punches when you have to. 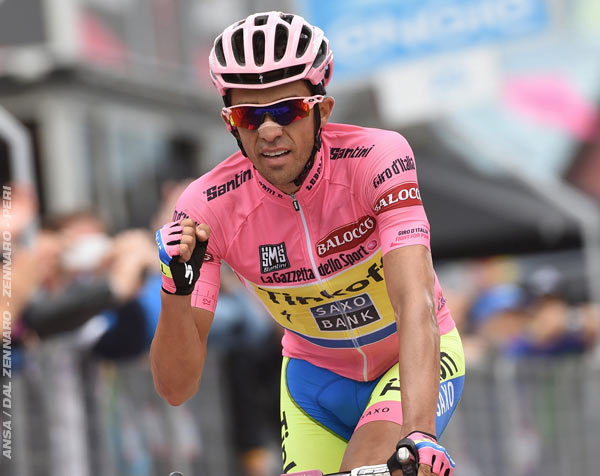 The Maglia Rosa, Alberto Contador, said: Today was not a great stage for me. I wasn’t feeling good, probably because of the accumulated effort, but I knew I had a good cushion in the General Classification and, even though there were plenty of kilometres to go before the finish, I preferred to ride at my rhythm. There was never a moment when I thought the jersey was in danger. I maintained my calm because I knew that the difference in speeds between the groups was going to be small. We’ll have a good dinner tonight, although I have to watch my weight for the Tour. This Giro d’Italia is in the bag now, with just tomorrow’s stage to come, so I’m already thinking of my next target.

All that remains is tomorrow’s stage to Milan and we’ll see Alberto Contador in pink … for the final time in his career?

Still the points classification to sort out in Milan – and despite Kruiswijk’s best efforts and the phenomenal consistency of Landa, Gio Visconti hung on after his epic ride yesterday. A three-point mountains win for the Movistar rider.

Stay tuned to Pez for Ed and Martin’s roadside report of another wild and thrilling Giro stage.