Race Report: Tom Dumoulin served up a Dutch treat at the Giro d’Italia 2016 stage 1 opening time trial by showing he’s not lost any of his chrono skills despite mastering climbing, and took the opening stage win and pink jersey by the width of a pinky after a blistering ride around Apeldoorn. The big Dutchman only just edged out Primoz Roglic who took a surprise 2nd place.

Tom Dumoulin started the Giro stating that he had no expectation of repeating his Vuelta heroics thanks to a lack of a mountain training camp, a stage win and the first pink jersey of the 2016 Giro d’Italia in his own back yard has to be a bonus. 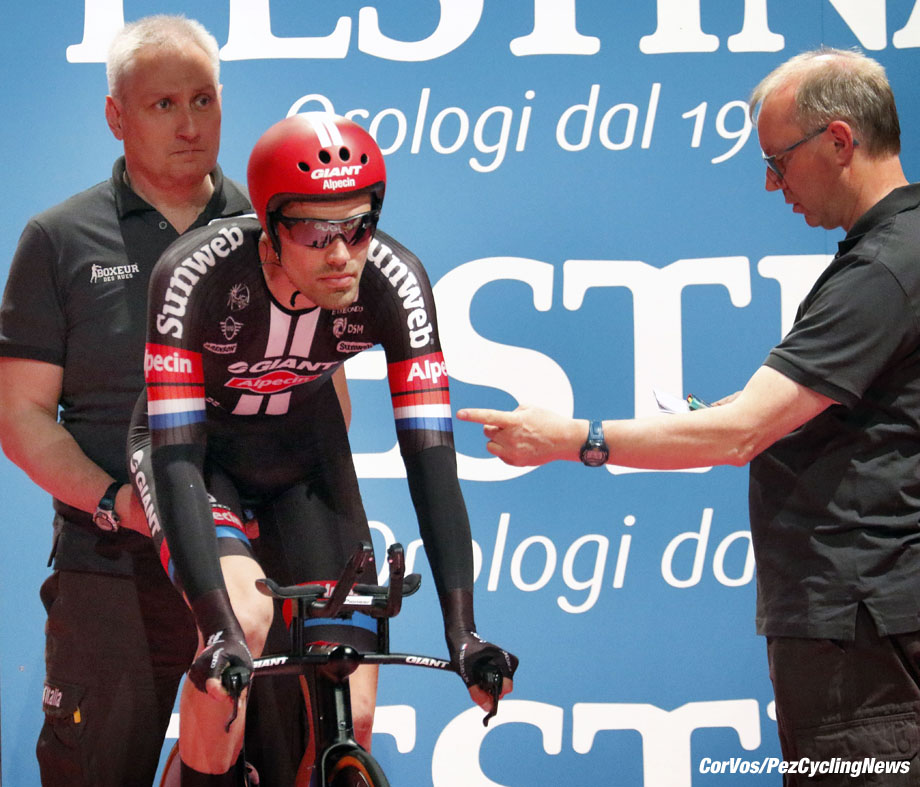 The start of Dumoulin’s winning ride

Course
We’re in Apeldoorn, in the centre of the Netherlands around 90km to the south east of Amsterdam. Home of the stunning Het Lo Palace, but more importantly for this event, the Apeldoorn Velodrome. The Velodrome hosted the 2011 World Track Championships where race starter Jack Bobridge (Trek-Segafredo) took two golds and his Australian team mate, and fellow Giro 2016 starter, Michael Hepburn (Orica-GreenEDGE) also won gold in the team pursuit.

The race starts in the velodrome and the riders will tackle a narrow and twisty cycle path for the early stages before they are funneled onto a main road for the rest of the 9.8km course. Given that we’re in the northern Netherlands there’s no climbing at all but, the time trial isn’t one just for pure power riders. The later half of the course is twisty and the winner will be someone who can lay down the power on the longer straights and also accelerate out of the numerous tight turns.

There are time bonuses of 10,6, and 4 seconds available on every stage apart from the time trials. A strong ride by a sprinter today could well put them in a good position to be in the pink jersey by the time the race reaches Italy. 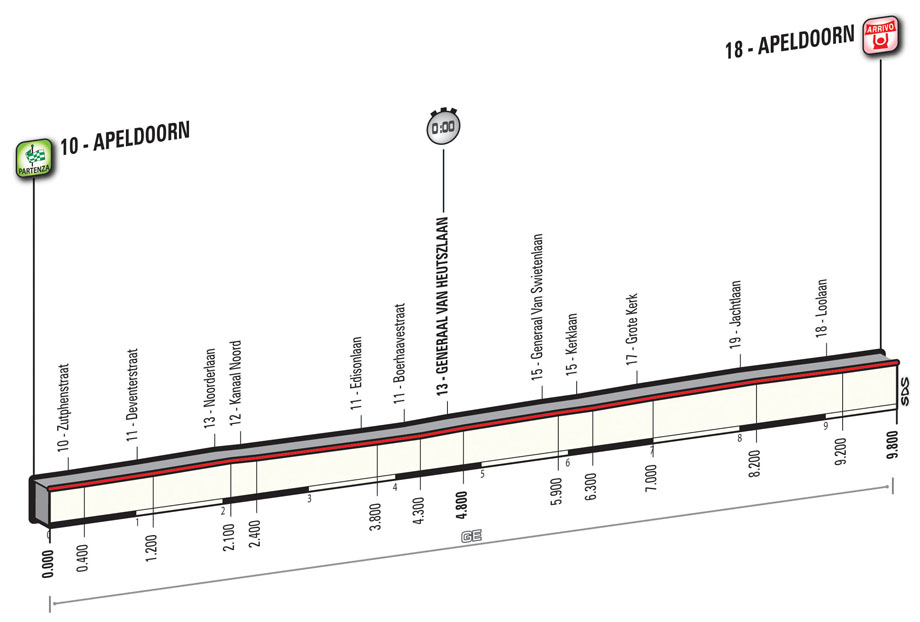 And we’re off!
Fabio Sabbatini (Etixx – Quick-Step) was the first rider down the indoor ramp. The Italian has started the Giro six times, finishing four of those, incidentally he hasn’t started a Grand Tour since 2013. He set the fastest time, unsurprisingly, of 11.49 with just 197 riders left to go. Sabbatini’s reign was very short lived, he was first overhauled by Andre Greipel (Lotto Soudal) and then by local favorite Moreno Hofland (LottoNl-Jumbo) with a time of 11.28. The sub 11 minute time was creeping closer.

The first ‘serious’ time trialler to hit the finish was Svein Tuft (Orica-GreenEDGE) but he wasn’t able to overhaul the Dutch sprinter, he finished second, just one second down.

The Hofland time was quick but he was vacated from the hot seat in place of former hour record holder Matthias Brandle (IAM Cycling). He came home in a time of 11.17 to lead by 6 seconds from Polish rider Lukasz Wisniowski (Etixx – Quick-Step).

Brandle’s time at the top was surprisingly short lived. He was beaten by Tobias Ludvigsson (Giant-Alpecin) who lowered the quickest time by 6 seconds to 11.11. 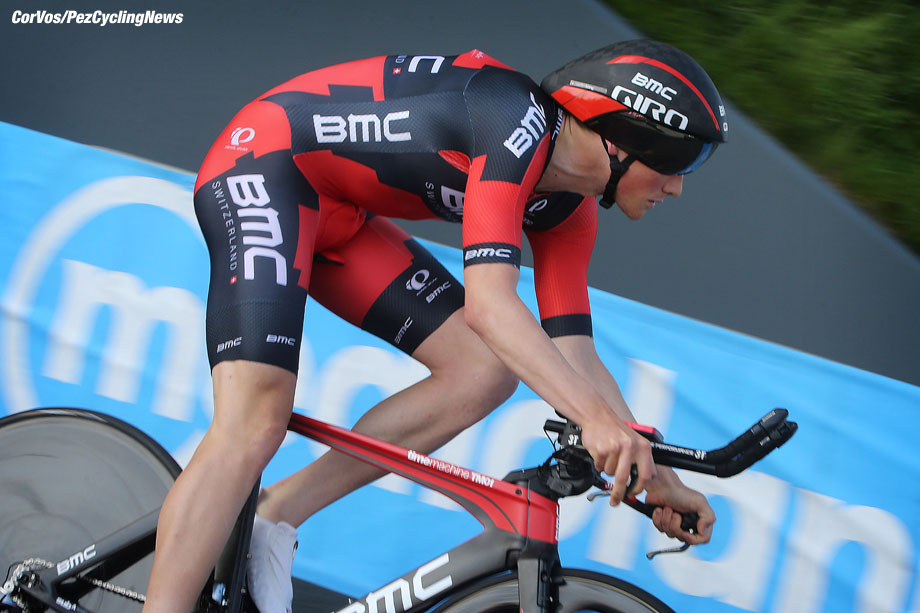 Ludvigsson’s Luck
There had been 70 riders who had started and finished and Ludvigsson continued to hold his lead. His average speed had pushed 53kph and no one had yet come close to dislodging him. However, there hadn’t been any main favorites for the stage, or overall, come to the finish line yet.

Alexandre Geniez (FDJ), who came ninth in last years Giro, came home in a very respectable time of 11.24, good enough for fourth at that point, 13 seconds behind Ludvigsson. He had taken advantage of the huge improvements FDJ had made in time trials this season and last to put himself in a perfect position to challenge for another top 10.

The wind had picked up on the course which meant the riders were now contending with a tailwind at the start of the course and a headwind as they ground their way towards the line. The decision to send riders out early was starting to look wiser.

Giant-Alpecin hadn’t picked up any wins in 2016 but all of a sudden they had two riders on the podium. Ludvigsson, who had now led for over an hour, was joined by Georg Preidler, the Austrian time trial champion, who trailed by just nine seconds in third. The Austrian was displaced by Silvan Dillier (BMC Racing) who slipped into third, eight seconds behind the current leader.

Tim Wellens (Lotto Soudal) was the first serious threat to Ludvigsson’s reign, he hit the intermediate split a whole four seconds ahead of the leader. He’d taken risks for the first 5km and he now had 4.8km to keep up the pace and to stay upright. The short answer, no, the Belgian faded in the second half and ended up almost 20 seconds down. It was a race of surprises though and one of the biggest was the performance of Primoz Roglic (LottoNl-Jumbo) who finally cracked Ludvigsson’s lead with a time of 11.03. Moreno Moser (Cannondale) was the next to record a strong time as he rolled over the line in third, 12 seconds down. 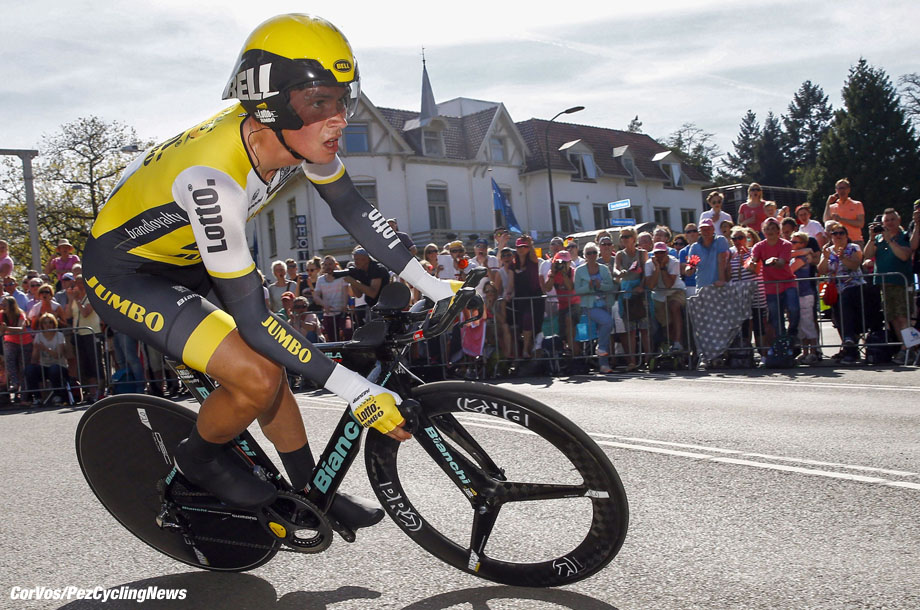 It was so close for Primoz Roglic

Primoz’s Prize
The Slovenian had set an incredible time but, he hadn’t gone under the 11 minute barrier. Would that matter when the big favorites came to the start? Marcel Kittel (Etixx – Quick-Step) had set off as Roglic finished and his aim was simple, finish within 19 seconds of the winner so he would have a chance to take the Maglia Rosa during the first two flat stages on Saturday and Sunday. So far so good for the German, he finished a provisional third, 11 seconds down on the leader.

Roglic’s place on the hot seat must’ve been feeling very comfortable until Andrey Amador (Movistar) came close to beating his time only for the Costa Rican to fade inside the final 300m and finish six seconds down.

The race was hotting up now and Mikel Landa (Sky) was the first of the serious favorites to start, followed immediately by Tom Dumoulin (Giant-Alpecin). Dumoulin would have benefitted from the performances of Ludvigsson and Priedler earlier and he would’ve had race info continuously fed back. Dumoulin has played down his chances of overall success in this race but he hit the halfway point with the fastest time of the day. His trip around Apeldoorn was accompanied by almost constant cheering and applause. 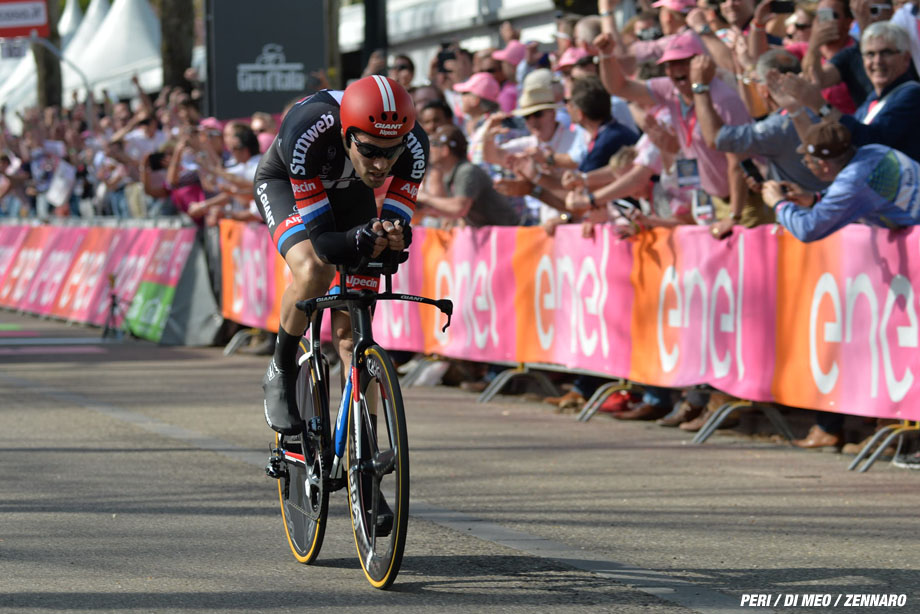 The home fans must have helped

The End Game
Rigoberto Uran (Cannondale) was the next to head out onto the course and he was followed a minute later by the overwhelming favorite, Vincenzo Nibali (Astana).

Dumoulin was flying with just 1km left to ride, he had missed out on yellow at the Tour last year but had a good chance of getting pink in 2016. Could he keep up the pace? Landa was the first main favorite to finish but he lost 40 seconds to Roglic. Dumoulin was just 20 seconds back from the Basque rider and he dived across the line… just ahead of the Slovenian leader. It was the Dutchman’s time to sit nervously and watch the TV.

The favorites were not quite matching the speed of Dumoulin with Rafa Majka (Tinkoff) finishing 38 seconds down and Alejandro Valverde (Movistar) finishing a more respectable 24 seconds down. Steven Kreujswijk (LottoNl-Jumbo) was the best of the rest though, finishing just ahead of Valverde. 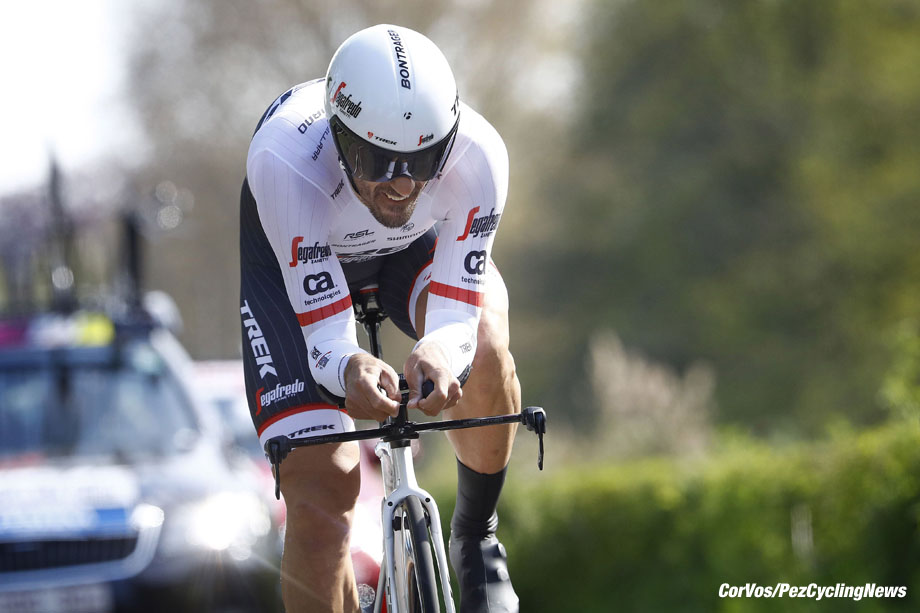 Not the result Fabian Cancellara wanted

Fabian Cancellara (Trek-Segafredo), who had a terrible build-up to this race, suffering with stomach problems earlier in the week and he passed the halfway mark eight seconds behind Dumoulin.

Meanwhile, Nibali was storming and he was set to record the fastest time of the favorites, just ahead of Kreujswijk and Valverde. Only Cancellara and Michael Hepburn remained on course who could threaten Dumoulin’s time. Cancellara couldn’t threaten the Dutchman’s time and he finished 14 seconds off. Hepburn also put in a valiant effort but he was no match for the flying Dutchman! 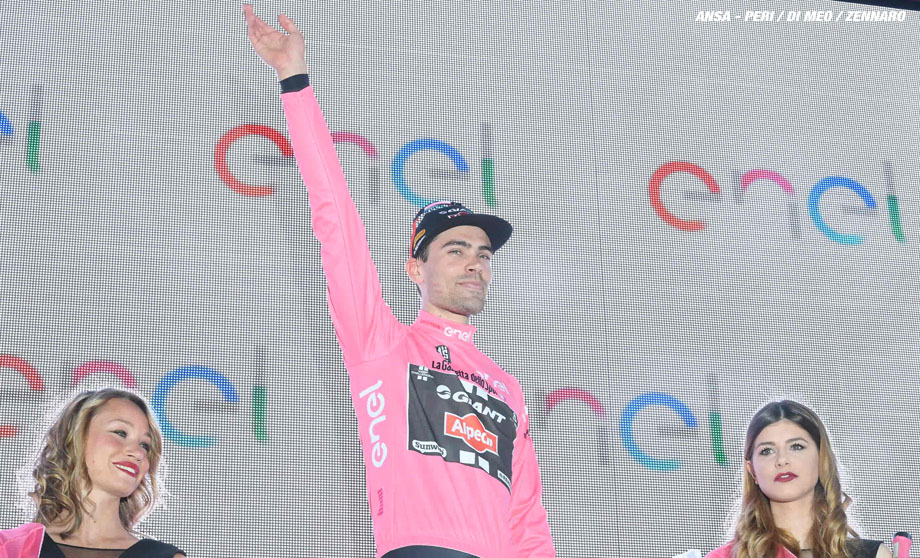 First Giro’16 pink for Tom Dumoulin at home in Holland

So, the 2016 Giro d’Italia has got off to a great start (for the Dutch), just a matter of three great weeks of on the bike battle ahead of us. Keep it PEZ for everything pink.

Good Morning from Stage 1 of the Giro d’Italia