Race Report: Diego Ulissi wins stage 4 in an exciting finalé with the Giro back on Italian home soil, but Holland is still in the mix as Tom Dumoulin tooks back his pink jersey with a strong second place just ahead of compatriot, Steven Kruijswijk. Ulissi made his bold escape 10K out and could not be caught before the finish line for a well deserved win. Welcome home to Italia.

***ATTENTION CANADIAN Readers: Watch the 2016 Giro live and on demand in Canada on Cycling.TV
CLICK HERE TO GET STARTED.***

The day started quite calmly with a nice early break of four, which suited the top teams. Then when the race hit the second climb all hell let loose as groups formed and splintered as the course twisted and turned on the Italian coast. A group of ten powered clear before the final (non-categorized) climb and when it hit the steep banks; Lampre-Merida’s Diego Ulissi went solo and held off the baying hounds all the way to the line. Fridays time trial winner, Tom Dumoulin (Giant-Alpecin) escaped the peloton to take back his overall lead from Marcel Kittel (Etixx – Quick-Step) who finished well down. 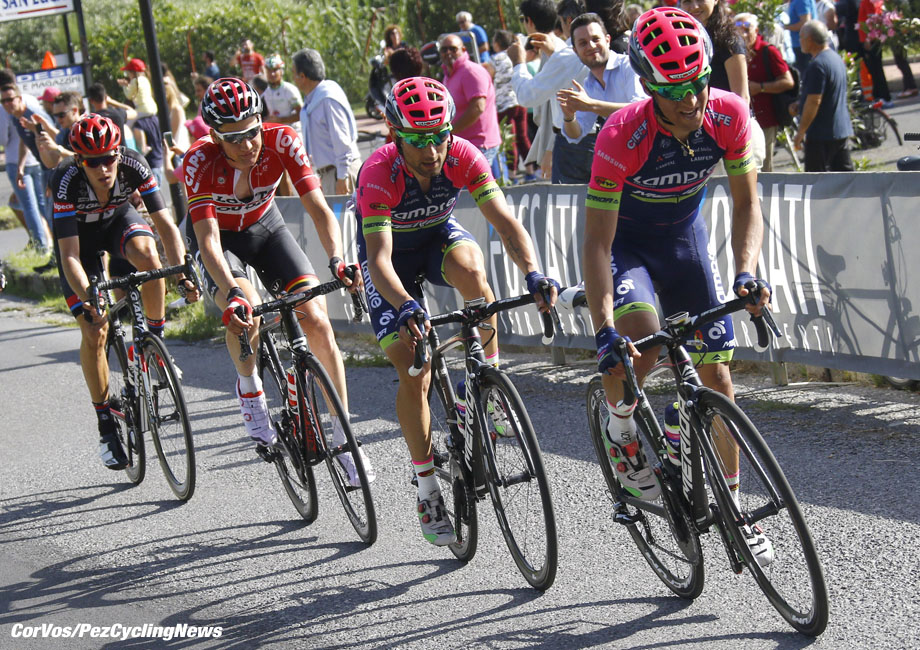 The 200-kilometer stage 4 from Catanzaro to Praia a Mare, from the toe of Italy to half way up the shin is what you would call undulating. The first 120km are relatively straightforward as the route winds its way up the coast on wide fast roads. Past Cetraro Marina, the route takes in the Bonifati climb before joining the main highway again. It then leaves the main road to tackle the second categorized climb of the day in San Pietro, which has quite steep sections at the start. The route becomes harder after the intermediate sprint in Scalea, with many climbs and descents, and twists and turns that lead into the final 10km. The final kilometers are rather lumpy. With 10km remaining to go, the route takes in the very steep Via del Fortino climb with 18% sections, then drops into Praia on wide and curving roads that pose no real challenge. The home straight is 2,500m long, on a 7.5 meter wide asphalt road, curving just slightly 40m before the finish. 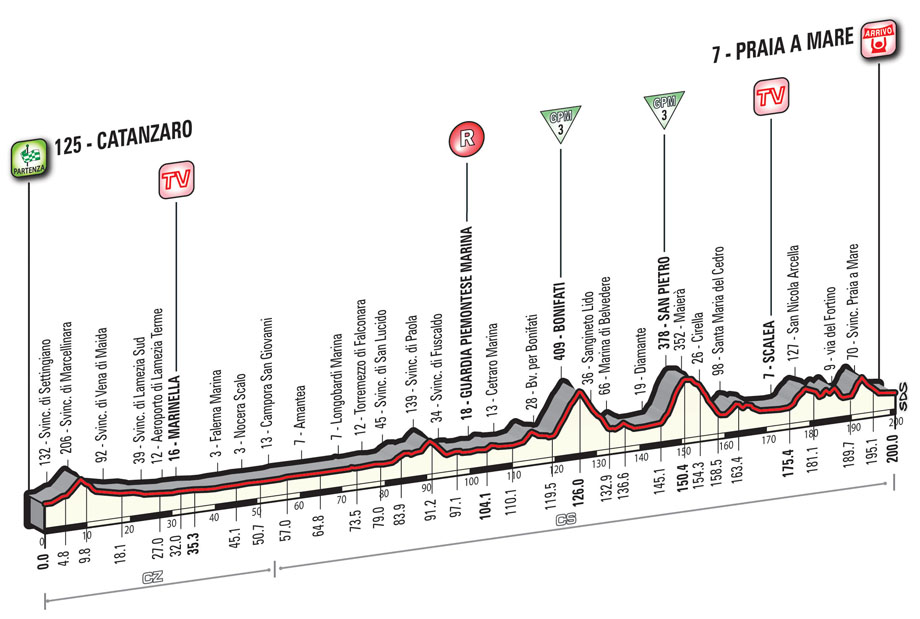 The start town of Catanzaro was packed with fans to see off the peloton on its first stage on home soil for 2016. The weather forecast was for 24ºC with a little breeze from the sea, so a nice day for a bike race.

First Break of the Day
After around 16 kilometers, Nicola Boem (Bardiani-CSF), Joey Rosskopf (BMC) and Matej Mohoric (Lampre-Merida) escaped and were soon joined by Matthias Brändle (IAM Cycling) and within 5 kilometers they had built up a lead of 3 minutes. Nippo-Vini Fantini had missed the move and were the first team to chase and after 40 kilometers they had the four leaders back to just over 1 minute, but no other teams were interested and so Eduard Grosu of Nippo tried to cross to the leaders on his own. At one point he got within 1 minute as the peloton eased off to drop back to over 4 minutes. In the end Grosu gave up as Etixx – Quick-Step took over control of the bunch.

Half Way Point
With 100 kilometers ridden the lead was at 2:30 for the four escapees with Etixx leading with Astana next in line. The pink jersey of Marcel Kittel sat behind four of his teammates, at the start he didn’t sound to convinced that he would still be in the overall lead at the end of the day, but did say he was happy to bring the pink jersey home to Italy. 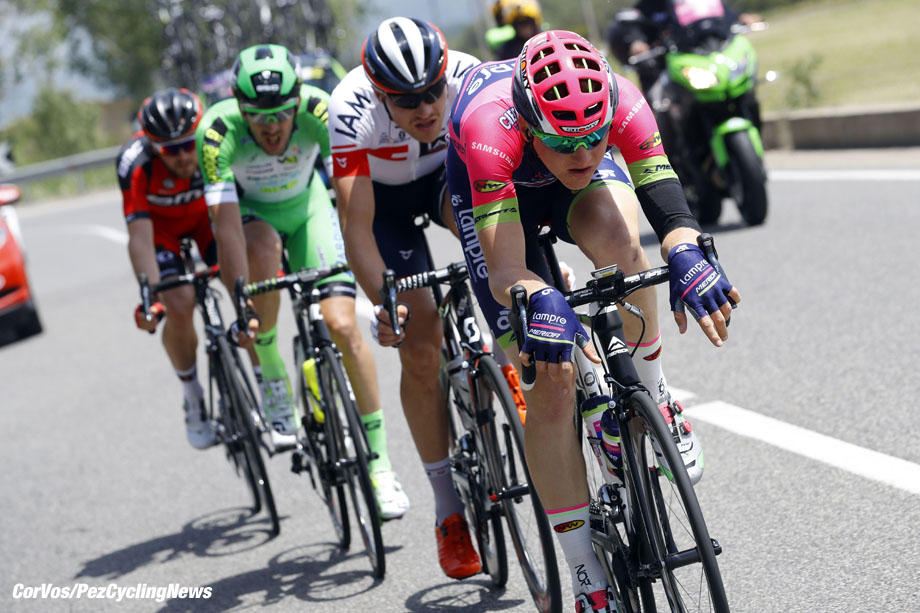 Bonifati
On the climb to Bonifati, after 120 kilometers, Mohoric attacked to be pulled back by Boem, then Rosskopf makes an effort, but it was Boem again who shoot past them both to take the KOM points followed by Rosskopf and Boem with Brändle just off the pace. After the summit the four got back together with a lead of over 3 minutes with 65 kilometers left to race.

San Pietro
The climb of San Pietro started after 145 kilometers, the lead dipped under 2 minutes. San Pietro is just over 5 kilometers long with its steepest section at 11%. As the speed in the peloton lifted at the start of the climb, the lead came down quickly to under 30 seconds as Giant-Alpecin came to the front for Dumoulin.

Two kilometers from the top and the break fell apart at the front and the sprinters started to struggle at the back, including the pink jersey of Kittel and Viviani in the red jersey. Milan-Sanremo winner Dèmare and Caleb Ewan were also off the back.

Before the top of the San Pietro climb; Pirazzi jumped with Cunego on his wheel. Pirazzi wanted the KOM, but Cunego had the speed to cross the summit first. They sat up after the climb to wait for the peloton. Behind the lead bunch; Kittel with his lead-out men was 1:29 down. Nibali put the Astana team on the front for the descent, not to finish off Kittel but to keep their leader safe, although Kittel’s chances of holding onto the lead were quite small.

It was Kittel himself who led the chasers on the fast descent into Santa Maria del Cedro in the valley and with 40 kilometers to go he had got within 28 seconds of the leaders. 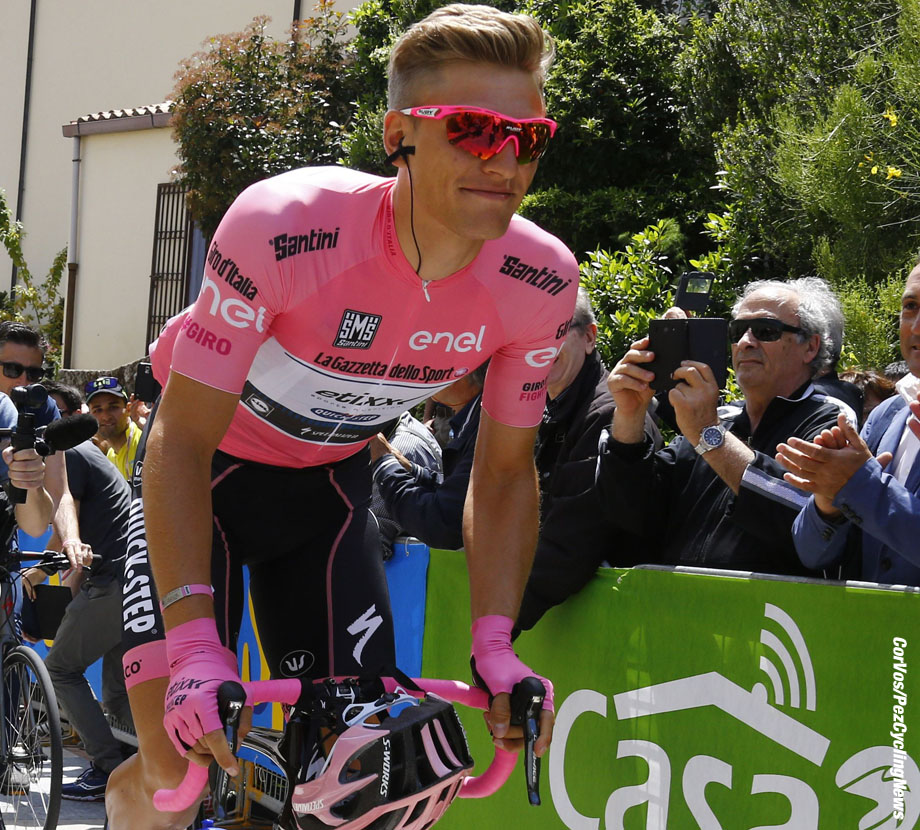 Marcel Kittel had his day in pink

AG2R-La Mondiale’s Guillaume Bonnafond and Axel Dumont attacked off the front to gain around 20 seconds in a couple of kilometers, at the same time as the Kittel group rejoined, but the bunch was splitting again.

With 30 kilometers to go, the two leaders had 47 seconds on a chase group of about 20 riders. Two kilometers further on and the chasers had pulled the leaders back as the Kittel group of favorites was at 30 seconds. Many riders in the front group were not happy with the situation and groups formed and reformed off the front.

Through the sprint in Scalea, with 24.6 kilometers to go; Peter Serry (Etixx – Quick-Step) took the bonus points and time from a group of seven as the peloton regrouped. Damiano Cunego (Nippo-Vini Fantini) attacked the bunch and crossed to the break, but with only a lead of 15 seconds, his move was probably a waste of energy. As the peloton were breathing down the necks of the escape, De Marchi (BMC) and Valerio Conti (Lampre-Merida) made another move and had the slimmest of leads as they passed under the 20 to go banner. Ten more riders came across to the leaders on the twisty road set back from the coast.

For the first time on the stage, the Movistar team came to the front for Alejandro Valverde who had said this finish would suit him. The lead was still at 20 seconds as they entered the last 15 kilometers. Kittel was again in trouble and had lost 30 seconds on the front of the race. 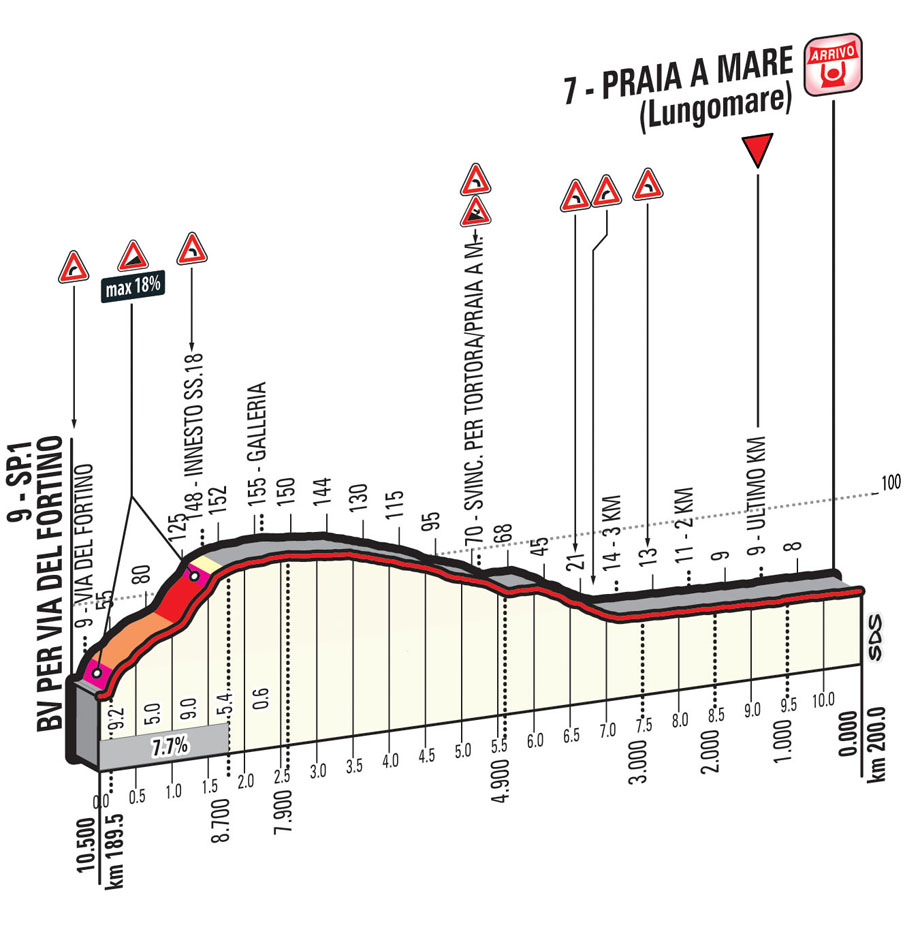 10K To Go
At the base of the sharp climb of Fortino, the lead was 34 seconds to the Astana and Cannondale led bunch. Ulissi hit the front as Conti pulled over after his hard work. In the peloton Pozzovivo (AG2R-La Mondiale) put the pressure on followed by Nibali as the race split to pieces.

Ulissi wanted the win and put his head down to hold the peloton at bay and with 6 kilometers to go he had 18 seconds on a group of the top men, except the dropped Ryder Hesjedal (Trek-Segafredo). On the descent to the finish in Praia a Mare, Ulissi was taking all the chances and at 3K’s out he still had 10 seconds.

Onto the beachfront road and with 2 flat kilometers to the line, the Italian was holding his 10 seconds. Under the red flag he still had his gap, but Tom Dumoulin (Giant-Alpecin), with Steven Kruijswijk (LottoNl-Jumbo), had jumped from the peloton to take back his pink jersey. 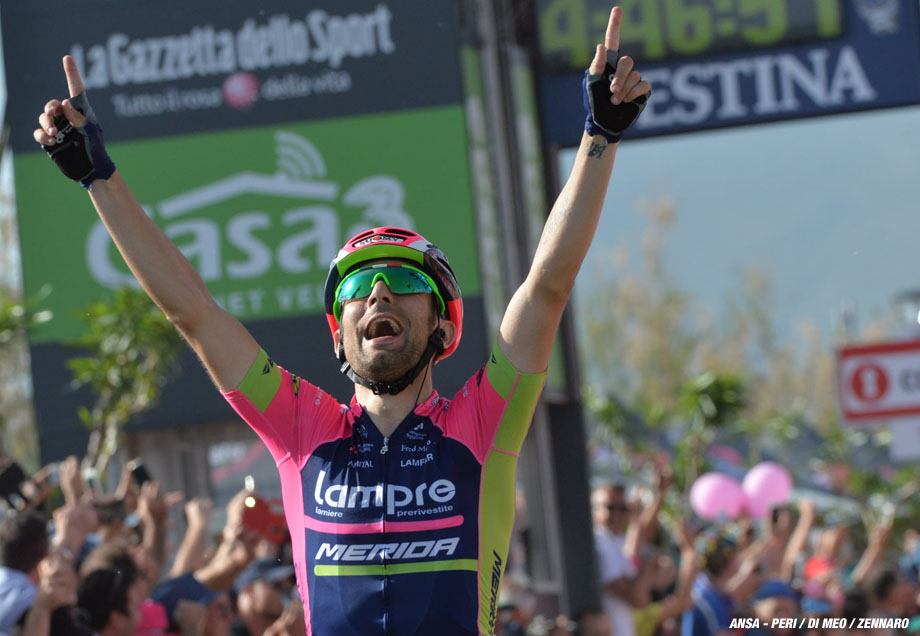 The last meters were painful for the Lampre rider, but he pushed himself to the limit to take his stage win. Next over the line was Dumoulin who had calculated that he could recapture the overall lead.

Diego Ulissi said after the finish: “I’m extremely happy. My victory comes after enormous team work. Valerio Conti managed to create the small group and I rode away knowing that, on the final descent, the peloton of chasers would go even faster than me. I gave it everything I had. It’s a huge emotion.”

Stage for Diego Ulissi and the overall lead comes back to Tom Dumoulin. The Giro comes home to Italy and the race catches fire. 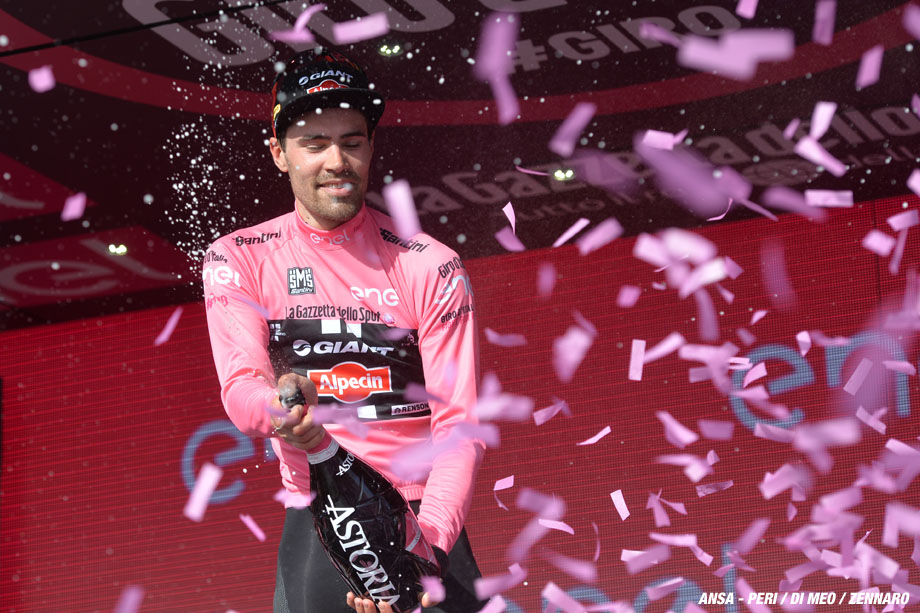 Back in the pink for Tom Dumoulin

Watch the GIRO LIVE in Canada