Roadside Report: The Monte Zoncolan was first used in the Giro in 2003 but it’s quickly become one of the true legendary climbs in professional cycling. Today our man in Italy Steve took on the sights, the sounds, the spectators and the super steep slopes of the Zoncolan just before the race came through to get a feel for this beast of a climb. Heaven or hell? 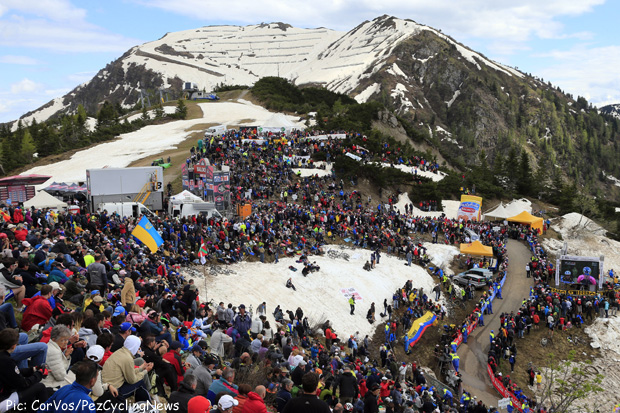 I didn’t sleep well last night. Thanks to the reading about the PEZ himself’s assault on Monte Zoncolan my confidence was being challenged. He spoke of people simply falling over, unable to unclip. Can you imagine how that would look all dressed up in PEZ kit if I became one of them? Had I once again underestimated the meaning of the numbers and their direct correlation to the amount of pain to be inflicted? Just as the luxury of hindsight tells you what the best decision would have been, the luxury of not having to face 4 kilometers of 20% for a few months allows you to believe that these numbers are not so frightening. 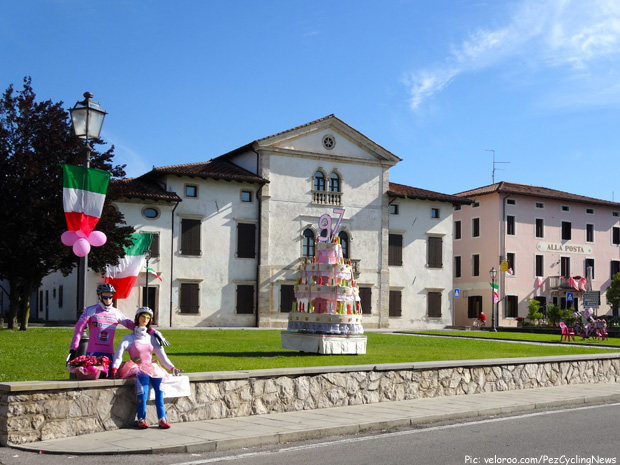 Our departure from the hotel was as pretty as you could imagine. Spring sunshine and greenery abounds with the amazing Dolomite Mountains as the backdrop. Entering today’s route all the village folk were dressing up their villages with pink. The Pink only heightened the spring mood. It is not possible to imagine any other colour working so well for the season. No detail was being overlooked. The people felt it was a privilege to have the last truly competitive stage of the Giro pass through their region. 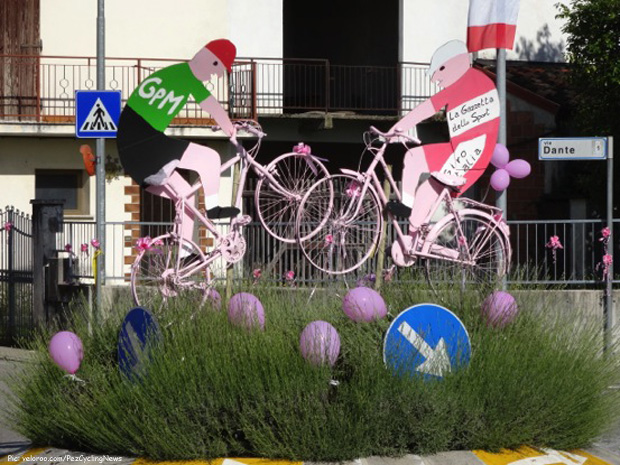 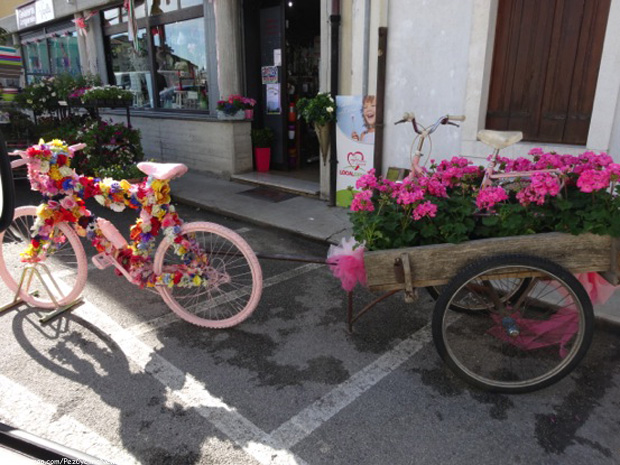 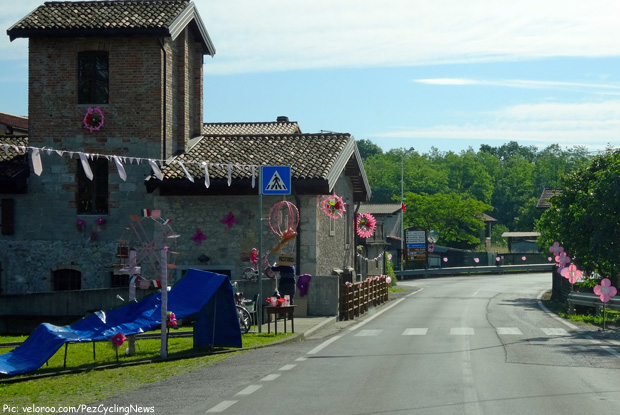 And then we came across this little monument to what is today’s challenge. We were 30 kilometers away for gawd’s sake, surely there were other Passo’s that they could claim as their local big ones!. How feared???????? is this place… 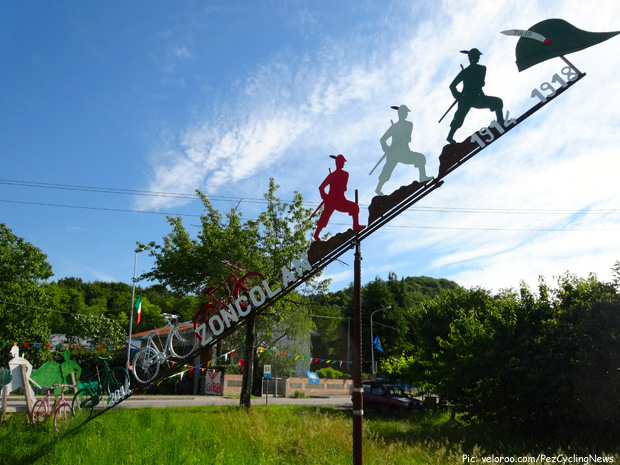 Alpine rivers are the most amazing looking rivers. Fast running, they are wide making you wonder what they must be like in full flight, and their colour is spectacular. The peloton will fly over this one just a few hours after I’ve been through not having the opportunity to look around – sometimes I wonder how much of the spectacular scenery the riders actually do get to appreciate. 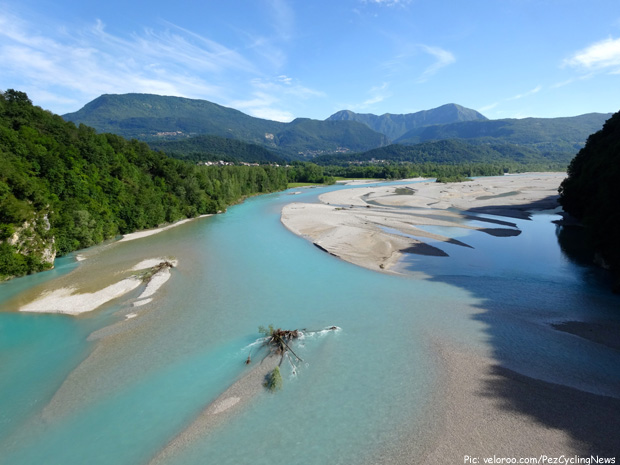 A good luck last energy burst of extra strong Italian Espresso at Ovaro from a lady that had already served hundreds of crazies that morning and we were away. 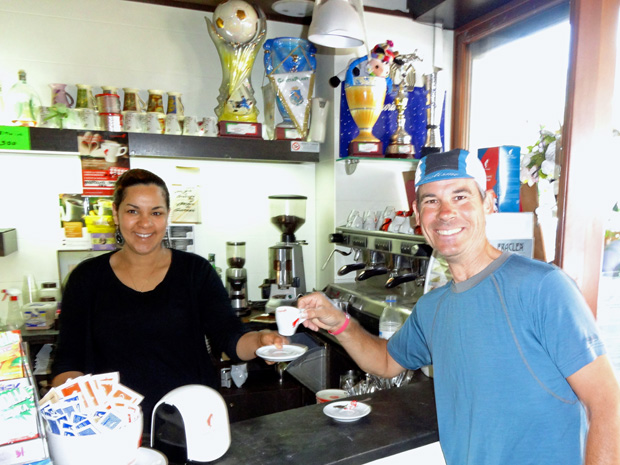 Through Ovaro you turn right, the sign is innocuous and the pink balloons only add to the non threatening mood. 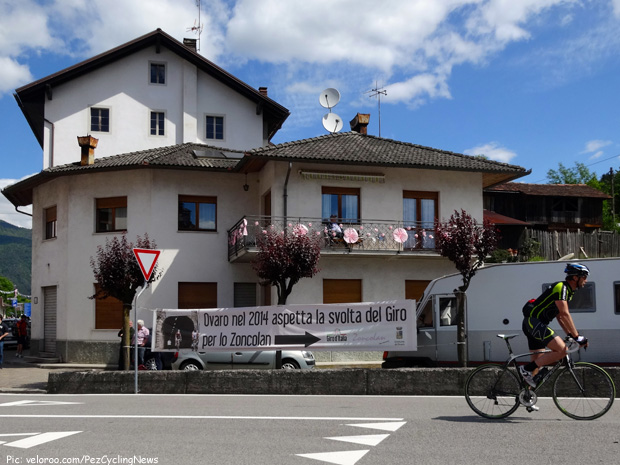 After a gentle climb of 9% into the village of Liiaris riders are welcomed with a visually spectacular treat. The last flourish of happiness? 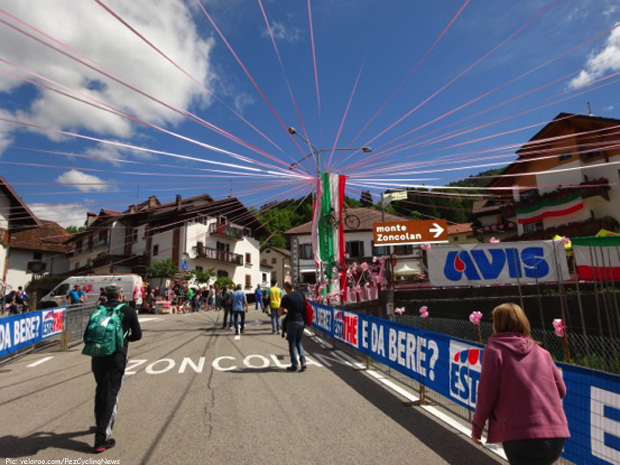 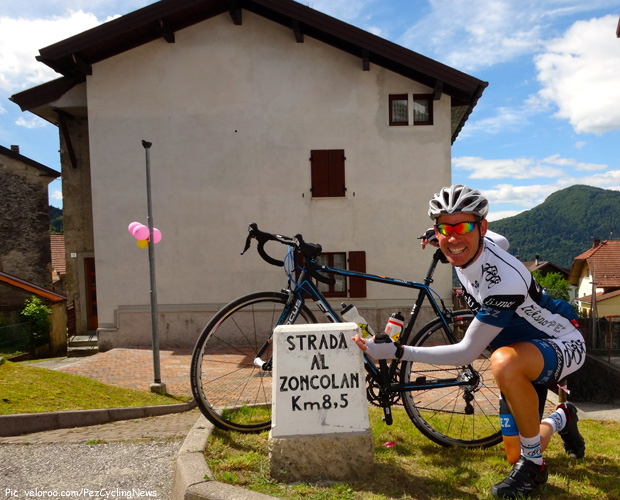 300 meters later….Oh #%it. From my perspective in the saddle, while fumbling for the camera the road disappeared behind the bridge of the welcome sign notifying the start of the climb. 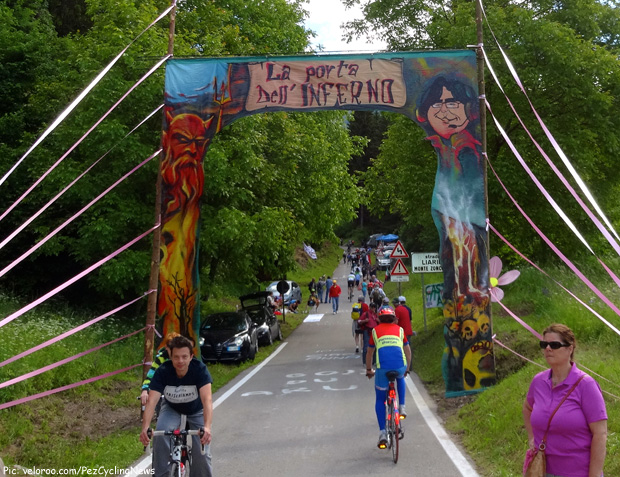 The gates of hell welcome you to the climb

Each tornante (switchback) is named after a rider, but the clever Italians prominently pronounce on the sign how far you’ve climbed. Unfortunately the first two are an even 500 meters apart. At this stage delirium has set in at a 20% gradient remember and the 1st tornante is a leg sapping 25% – the 1st one! You then forget the sign is the counter for the tornante and the 3rd is at 1300 meters into the climb. So just as you thought “that came up quickly, great” your brain has to reconfigure.

Even at this stage there are plenty of people reconsidering the wisdom of their attempt, sweating, cursing and puffing. A lot have already set up camp roadside. They are probably the smart ones. 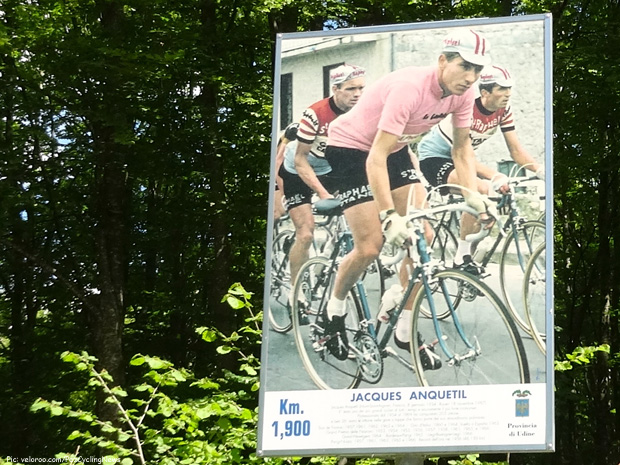 The photos I took of the vertical straights just don’t demonstrate sufficiently the confronting visual of a wall of tarmac in front of you. However this tornante does. At this stage, I think turn 4, we now find a lot of people demonstrating the true description of a “push bike”. 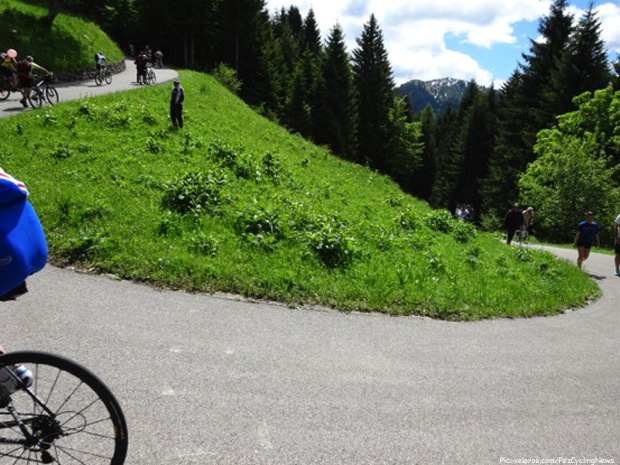 All up the climb people were getting in early, celebrating the world class event that was to come past them on this beautiful day. It was great to see families getting in on the act too. 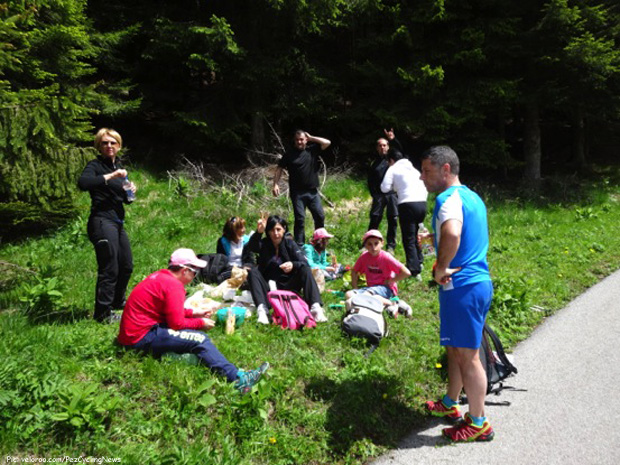 The challenge of the climb is not limited to the gradient either. It’s the sheer number of people who are either walking or riding…. or walking their bikes. Everyone is in their own little bubble of agony spread across the road, oblivious to those moving at a faster pace. Without singling anyone out …. the walkers and mountain bikers with the granny gears are the worst. They get such a shock when you call out you are passing.

Then you have those coming down, gallantly at breakneck speed with their windvests loudly flailing behind them. 10 seconds later you catch a whiff of their brakes and for the record, carbon wheels smell the worst.

For 4 kilometers basically every pedal stroke meant that the front wheel on my bike lifted, and I was continually sliding myself forward. My camera whilst my friend for the story was my foe during the climb as it swayed around on my wrist poised to capture the image I hoped would convey the pain, concentration and self help talk.

As the ride continues you begin to discover the species that I dubbed, ‘The Weavers’ (pictured below). They are the real hero’s turning an agonizing 10 kilometer climb into an agonizing 20 kilometers at least! It becomes a game of maintaining your momentum….what little there is…and not crashing into them as they cross your path again completely unaware of your presence. Of course I was compassionate though because you just never know if your turn will come, and karma can be a real bitch.

But what a beautiful place to put yourself through hell! 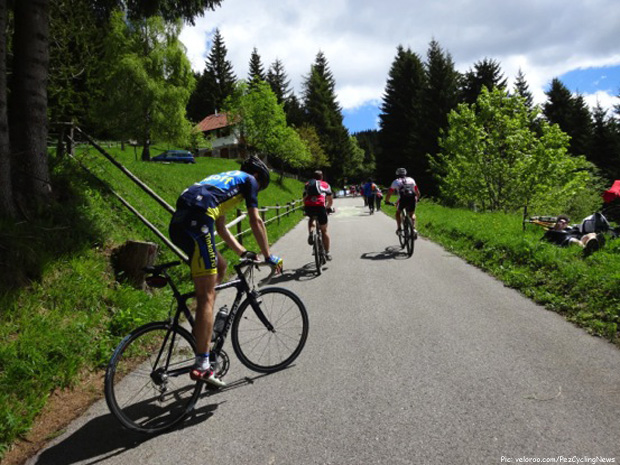 3 km into the 4 km long 20% section as I was telling my legs to shut up, I came across a huge group of people shouting and yelling, I thought this is it, my feet will be put down, but they were very aware of what was going on around them, the path cleared and I saw that they were cheering on their Mate who was doing the climb unassisted…..in his wheel chair. Wow. My legs felt better. 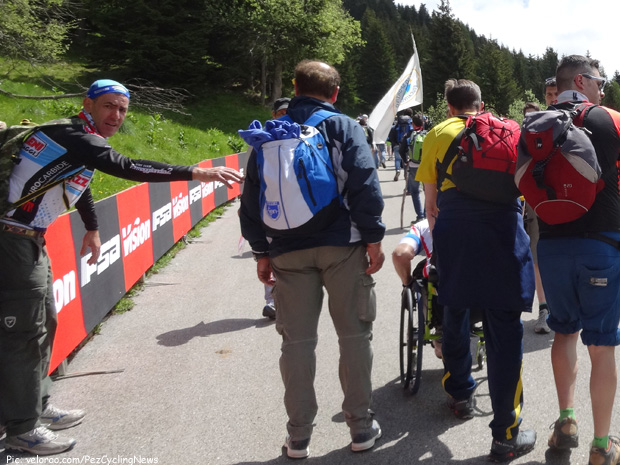 Pleasingly as the climb got longer with the forest thinning as the altitude got higher the tornanti didn’t let up. 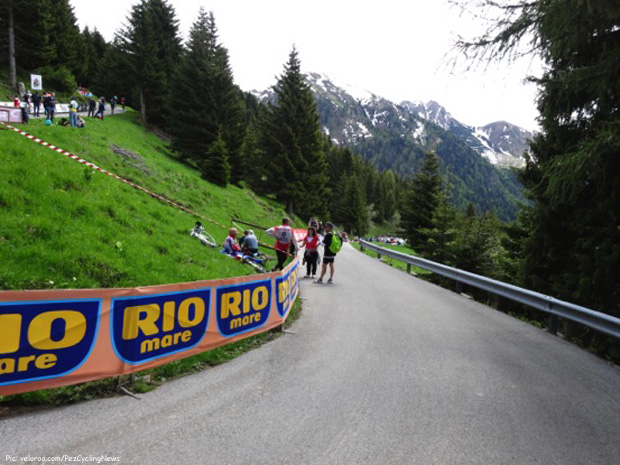 Further up the climb the landscape changed dramatically. There was too much to take in. Every single inch from this point – about 2 k to go – was spectacular and worth the effort. 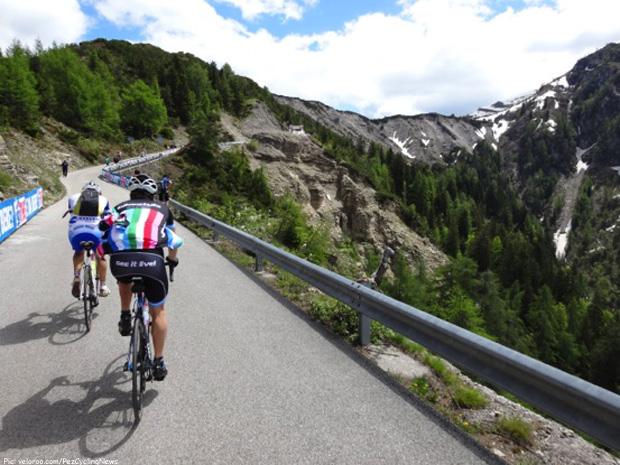 Disregard the blurriness – I was blurry too by this point but the tunnel – first of 3 – in the last km shows the gradient against the level stone work. 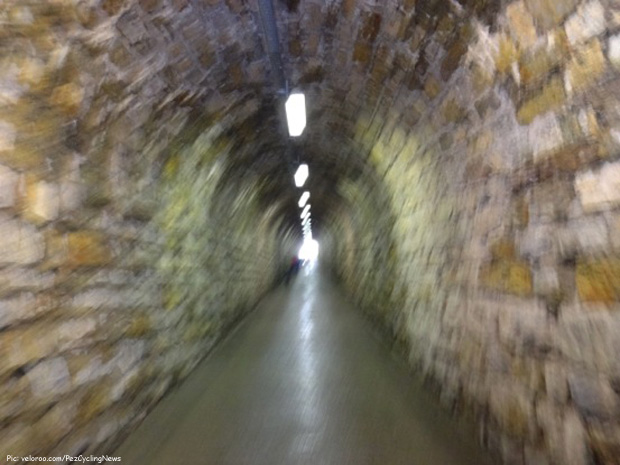 And then for the last couple of hundred meters, you were the main act in the natural amphitheater of the summit. 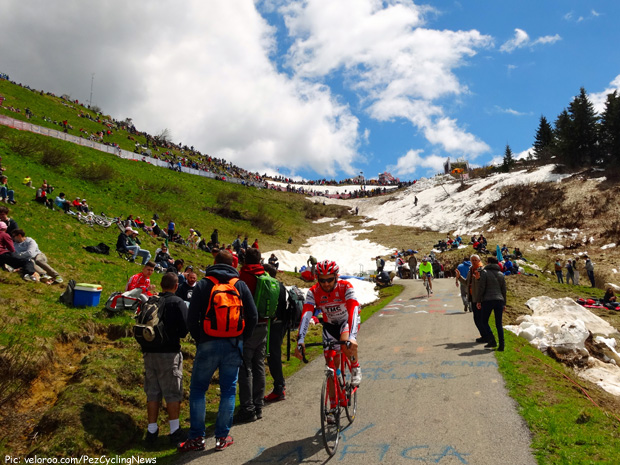 And the final shot on the route, as always, but a security guard without the sense of achievement I was hoping for in the shot wouldn’t wait for me to be fully ready. Ah well, next time! 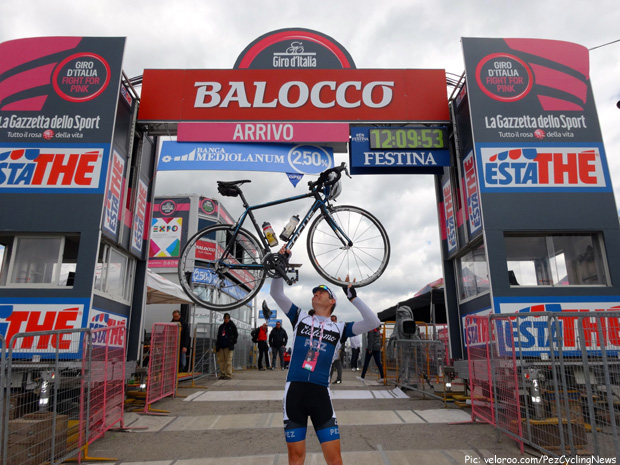 Steve strikes his signature pose atop the Zoncolan – this time he’s really earned it.

Now that that amazing, enjoyable and yet hell like experience is over – did someone say PARTY?? Just one of 3 DJ’s belting out some beats for the gathered fans, here to watch a piece of history unfold. 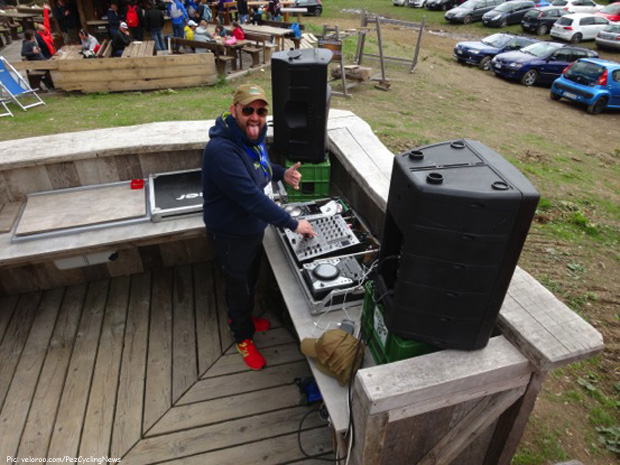 Security guards and army personnel lined the last 500 meters about an hour before the riders arrived. The atmosphere was nothing short of amazing. 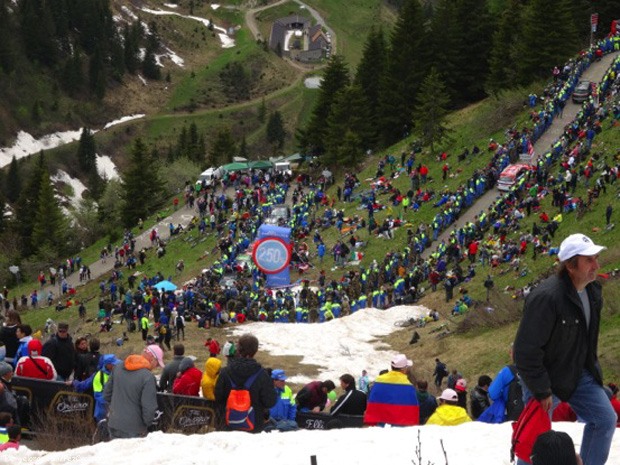 Giro, you have really showed how to put on a party to celebrate the last “race” day. 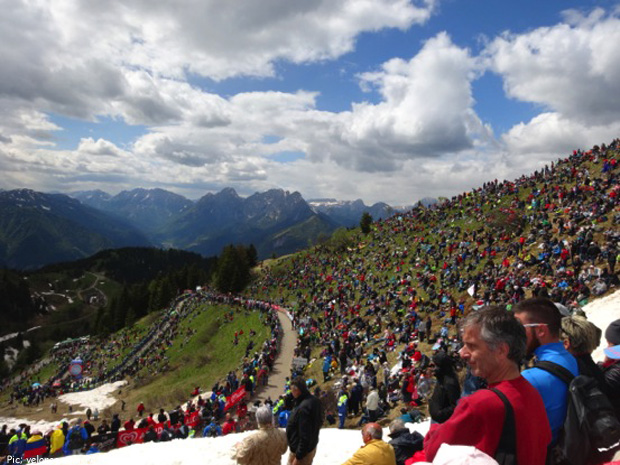 Monte Zoncolan. What a location. The ride was beyond anything I have done before. I cheated by starting the climb 10 or so kilometers from the start of it so I didn’t have 157 km already in the legs like the pros so perhaps my perspective would be different to them but I think the Zoncolan is now etched in my memory as my favorite climb. Would I do it again? In a heartbeat. It rewards as much as it punishes, and the most interesting part is the technicality means you do need to study it and treat it with respect, because it can bite and bite hard. One day I hope to share it with some friends. Oh and if you are considering it, do it in May. The scenery is the perfect reward. 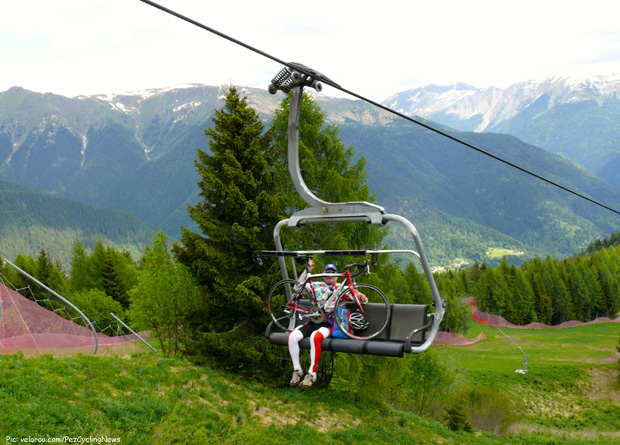 As tempting as the chairlifts may be please don’t succumb! The Zoncolan is there to be ridden, no matter how slowly.

Steve ‘VeloRoo’ Prokop is an Aussie cycling enthusiast who runs a bike hire and Tour company with his wife Julia in the south of France for most of the year before returning to Australia in the French winter to enjoy the sunshine and visit events such as the TDU. Check them out at veloroo.com for an unforgettable cycling holiday.