PEZ Roadside – PEZ-man Alessandro opens our Roadside coverage from the slopes of the climb at Roccaraso – here’s what you didn’t see on tv.

Yesterday evening I was thinking that the Giro d’Italia came too early this year. Or, most probably, I’m not able anymore to control the time passing through. Today’s stage finish is in Roccaraso, close to another town called Rosivindoli – where I met Mr. Pez in person some years ago. I was sure it was few years ago, but then I realize it was the 2007. Yes, time has passed through.

[Actually, our first meeting in person was on the slopes of the Colle della Finestre in 2005. The meeting Ale cites was in 2008… yes time is passing! – Pez.] 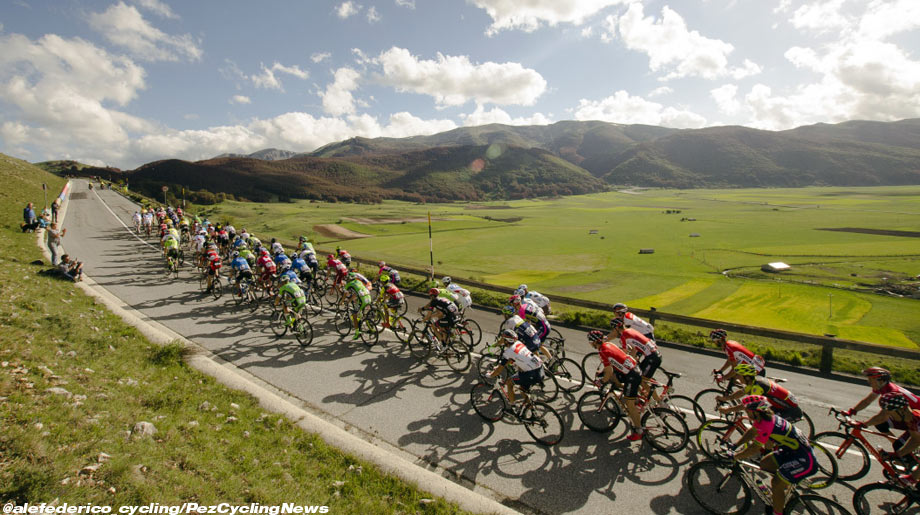 The gruppetto on the final climb.

The weather this morning didn’t promise anything good but I drove confidently southbound because the forecast was for an improvement in the afternoon. This year I have the honor to be the first Pez-man on the road, for a few stages in central Italy, then I will pass the pen (or laptop..?) to the Great Ed Hood who will follow last week on Alps. This race has just started and I think that we will have very interesting moments to pass to you. 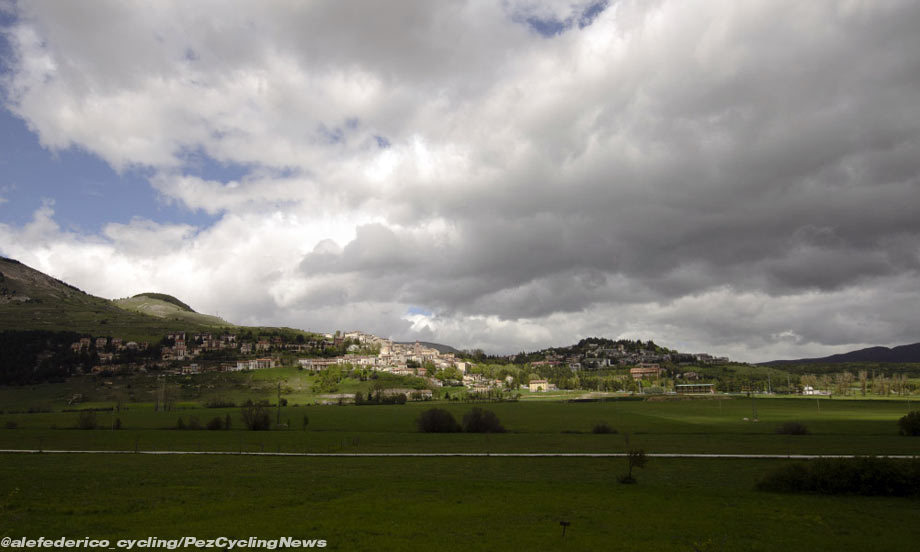 Rosivindoli, the town where I met Pez in 2007. It’s not yesterday anymore!

Several times during the winter I thought what kind of stories we – on the road – should write to deliver the kind of atmosphere we live at races. Then I simply realized the Pez roadsides are exactly the picture of the real Giro. So, what follows now, was my day. 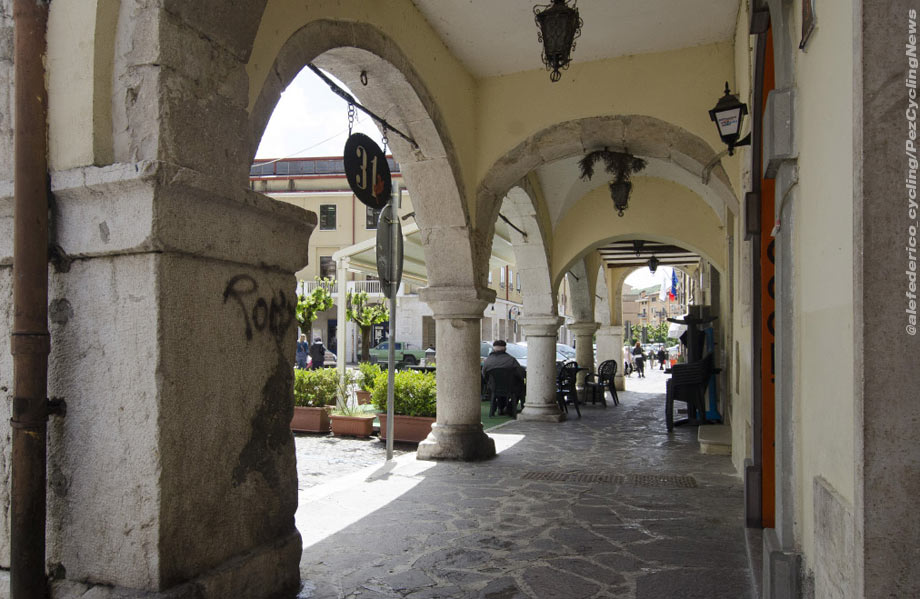 I passed the morning in Castel di Sangro, a town in the flat just before the final climb.

It was raining the hell at the finish this morning. And it was cold. So I decided to drive to the bottom of the final climb, into Castel di Sandro, to get some warmth and – possibly – also some better weather. I was lucky. Castel di Sangro is a town inside the Abruzzo mountains in the south of Italy. South or center, it’s difficult to discriminate: we are not yet in the center but we are no more in the south. 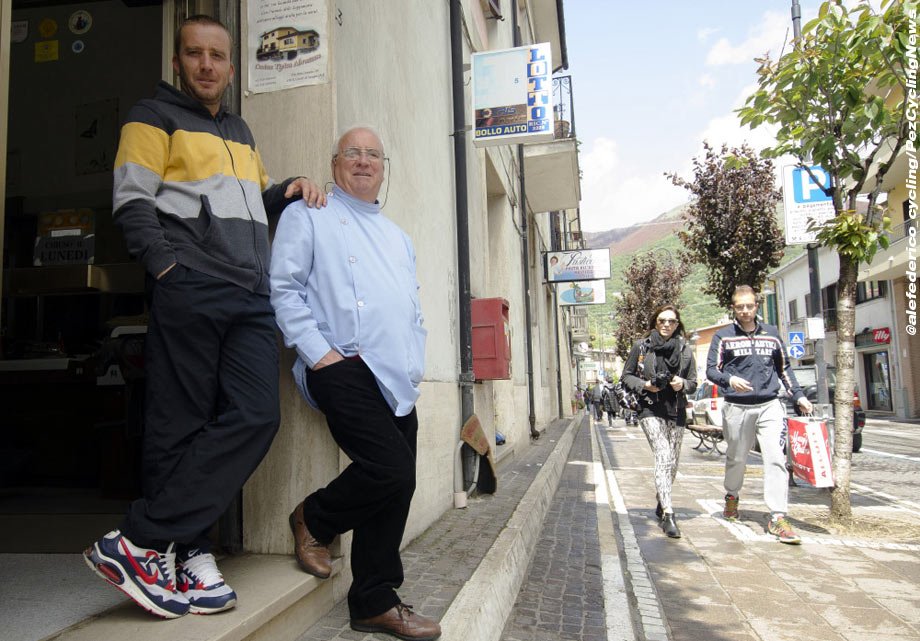 People are nice in Castel di Sangro. But no time today for a haircut.

I love to take some round of the towns where the Giro will pass through. There’s a kind of excitement that is reflected in each daily activity. The outdoor market today was closing earlier the usual. Schools were also closing one hour earlier. The Giro passing through is a big deal – and what better way to capture young fans than by giving them time off school? 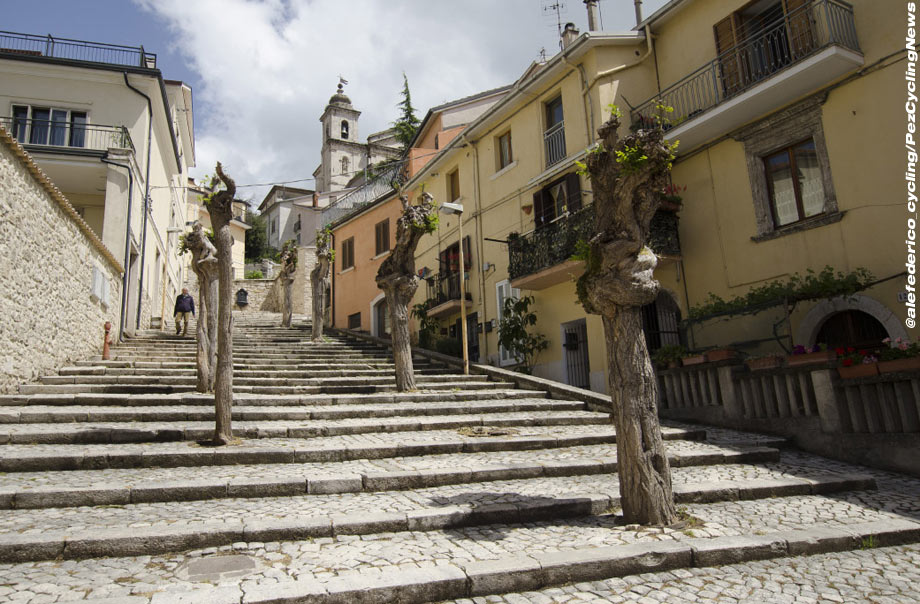 Castel di Sandro is not the kind of place you come to visit after a long Atlantic flight. It’s not Rome or Venice for sure. It has really nothing special to show except for a white church on the top of a long white flight of steps. But if you pass close by it’s something to be seen, and the people here are also very kind, as usual in the south of Italy. 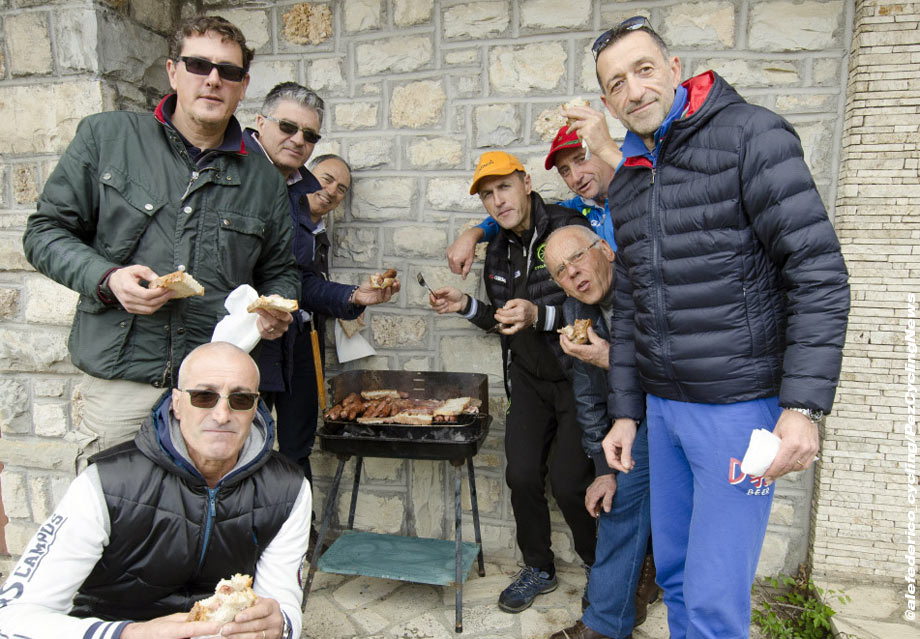 Lunch time – the group from Colleferro won the picture of the day. 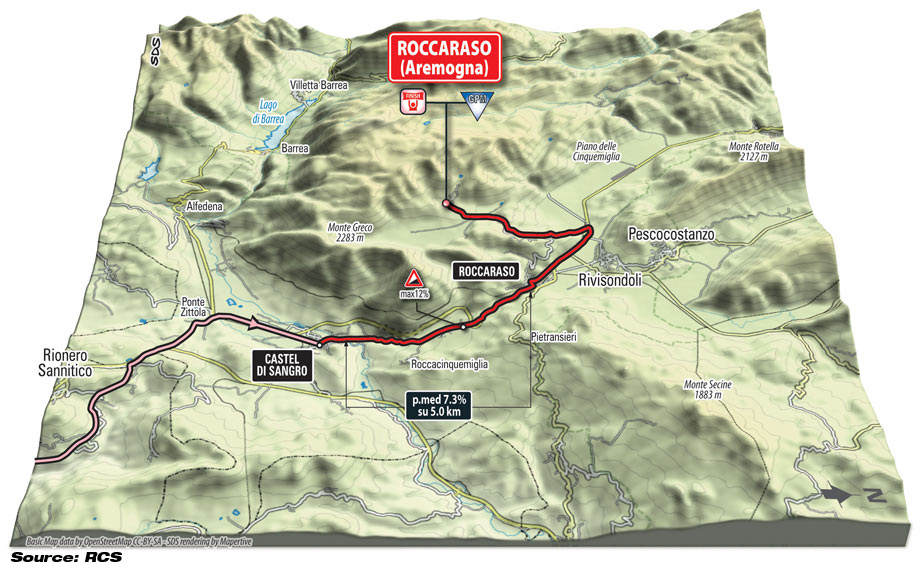 For lunchtime I moved on the climb. I was hoping to find some generous tifosi offering me some good panini. Why? Because those panini made with local salami on the grill are something you can find only at the Giro. Local wine included. I was lucky, a group of guys coming from Colleferro (near Rome) offered me a great sandwich – very simple but very tasty. Their grill was fantastic! It’s quite usual that people on the road offer their food to the journos or photographers hoping to be paid back with their picture published somewhere. Here you go guys; you’re on Pez now! 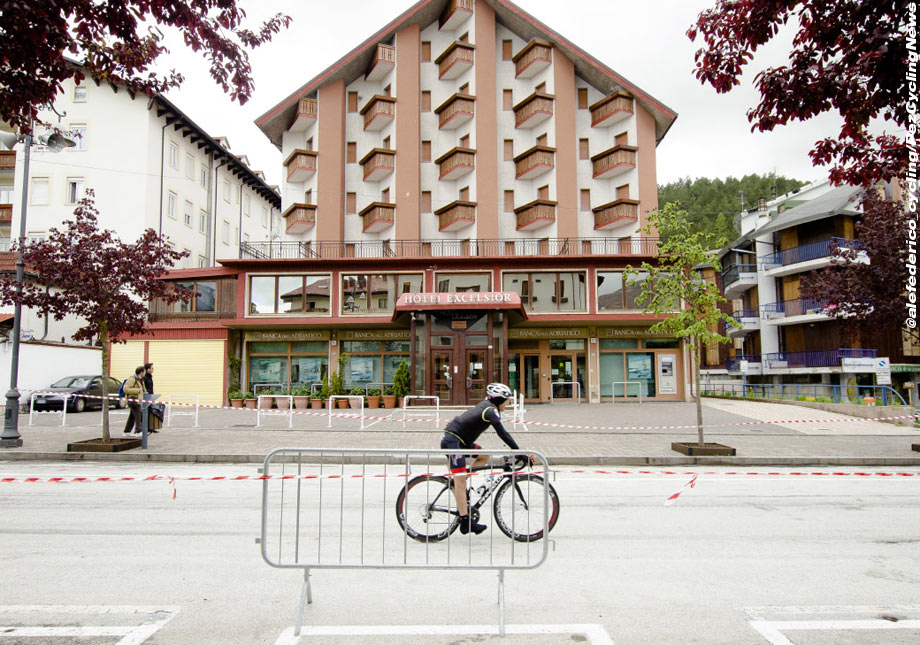 Proceeding on the climb I met another small town: Roccaraso. The stage finish was set 10 km past the town – giving anyway the name to the stage – on a flat plateau 300 m above of the town. Roccaraso at this season is a kind of ghost town. This place sees the life in the winter, for the skiing season or in the full summer, when the people from Napoli and Rome come here to enjoy the freshness. In May all hotels and resorts are closed and it gives to this place a kind of “Overlook Hotel” effect.

Better move ahead, I thought, and I came in the last section of climb, where I set my position already in the morning. I choose to stay at 5 km from the finish, aware that most probably I couldn’t see the big fight but on the road it’s different from the TV: you always miss the big fight. 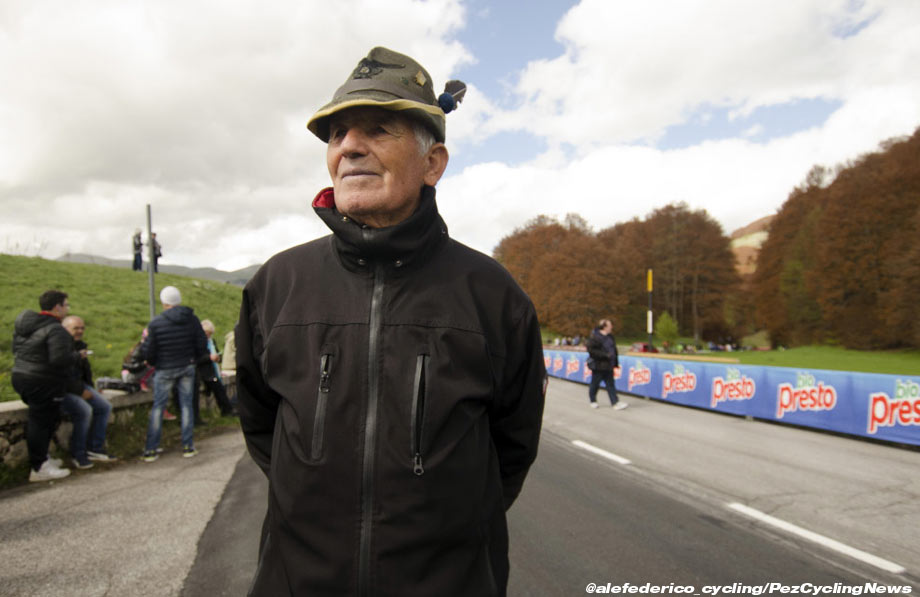 The great thing to be on the road is to meet and talk with special people, like Francesco, an Alpine soldier 80 years old, very proud of his hat, still in good form, that can talk about any mission he took part, included his last one in Kosovo, when he was 65 already. 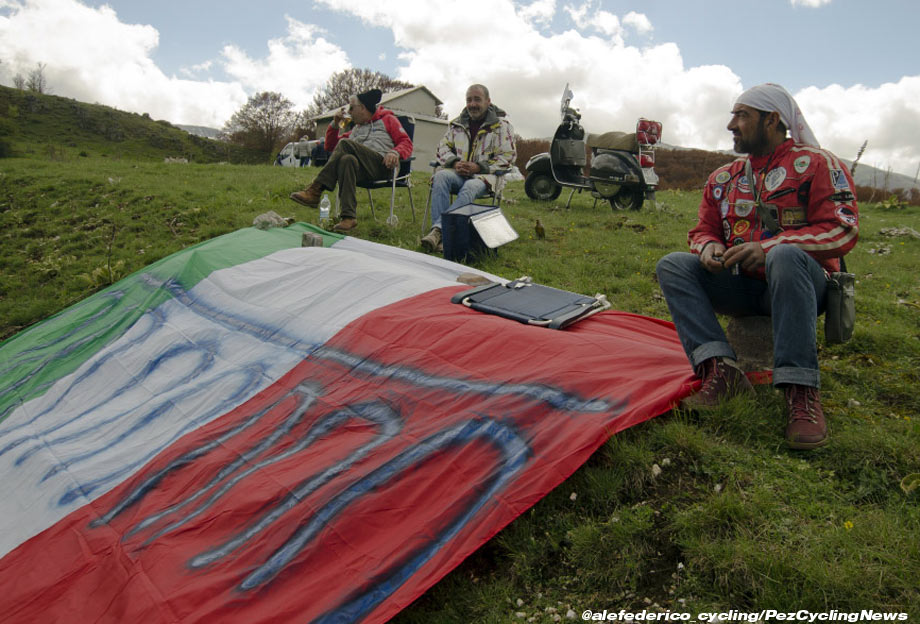 Or Matteo, that with his “Vespa” goes every year to the official Vespa international meeting. Last year it was in Belgium, this year in Spain and next one in Germany. His Vespa has already 120.000 km but the engine is so good that he can make easily the double. 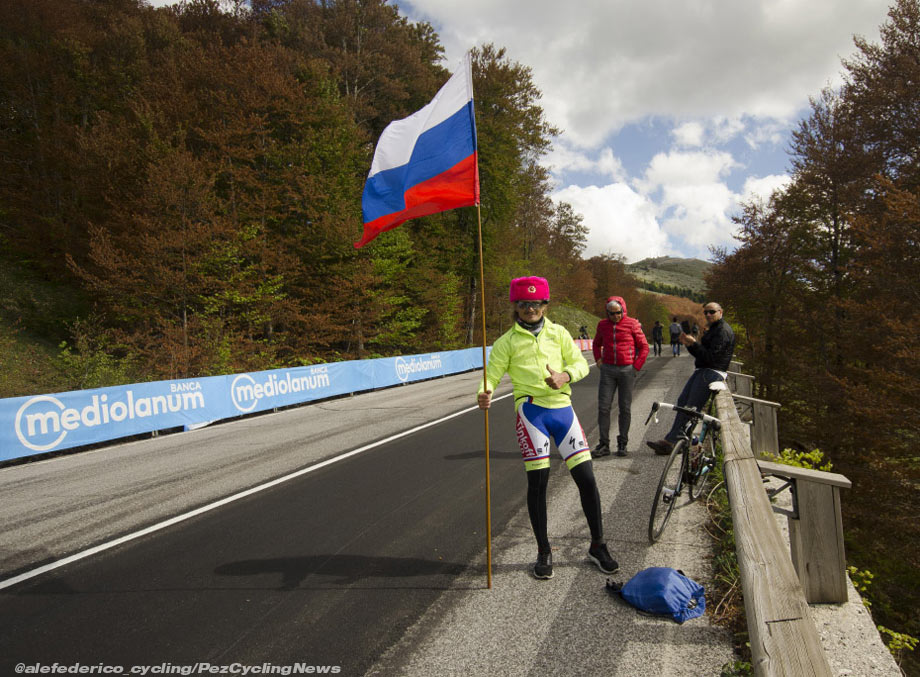 Another great one I met was a Russian guy, not generous with words (a true Russian as you may expect) following each stage of the Giro with his bike and his flag. I think I will meet him again and next time I will ask, at least, his name. 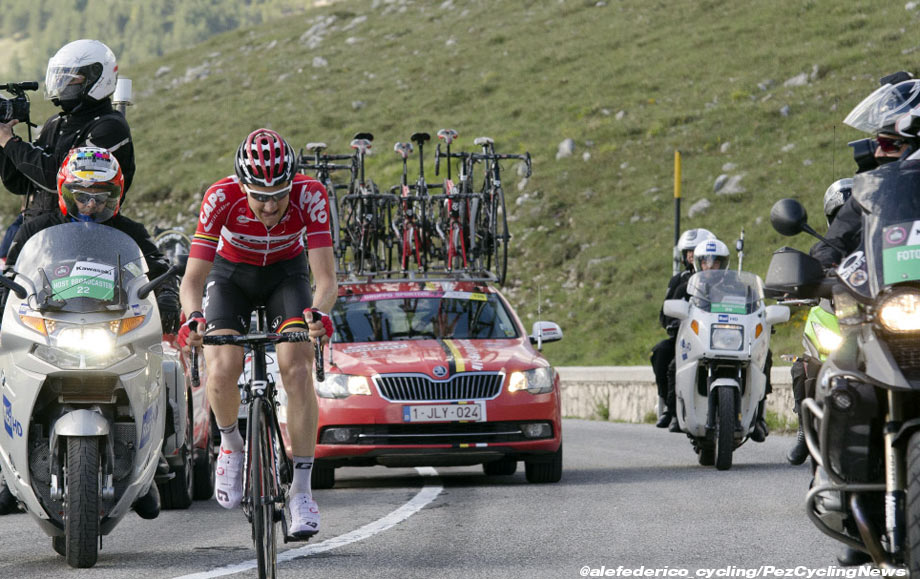 About the race? Well, you’ve seen it much better than me, I believe, but I can assure you that Tim Wellens was under an enormous effort. You could hear clearly his breath at the limit. 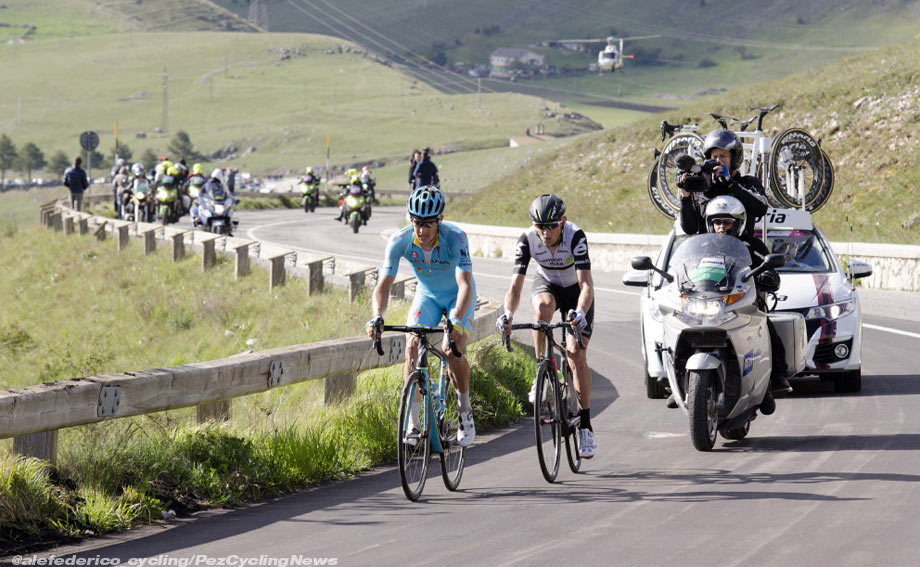 Also I was quite impressed by Fuglsang: great ride. 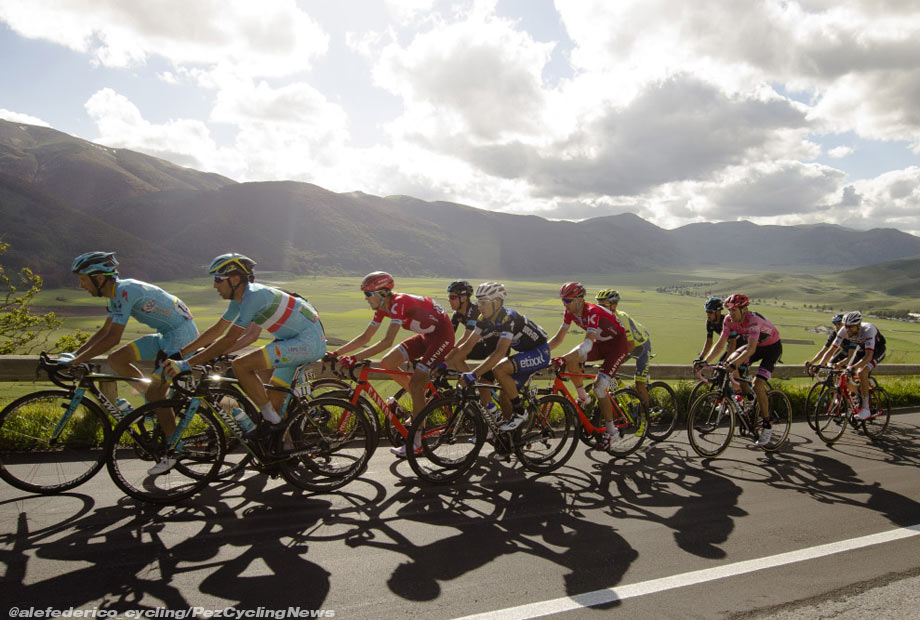 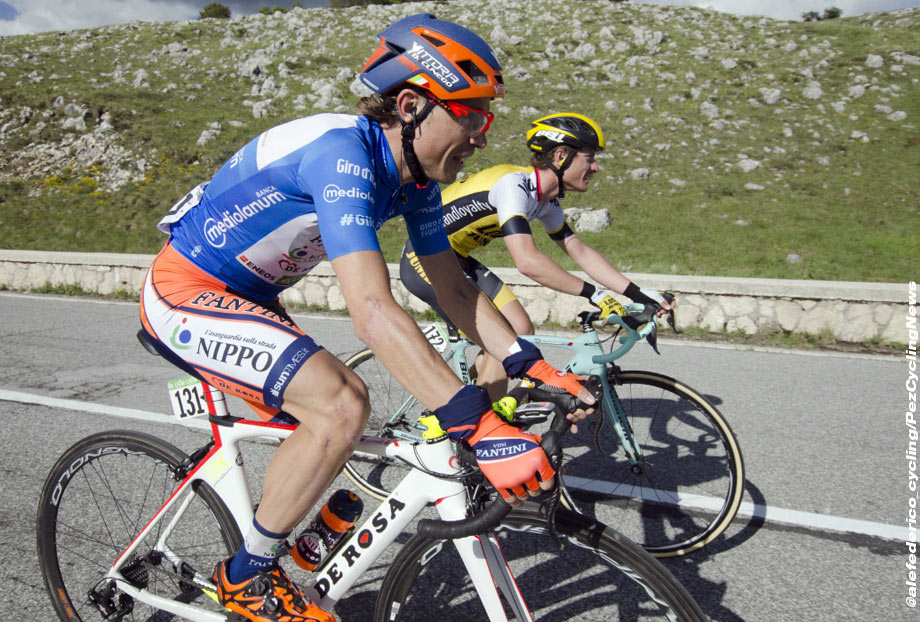 Damiano Cunego and his new life in KOM blue jersey

All others in the bunch at 5km, still a big bunch. This was not the climb to decide the Giro, but was a starter. I believe we have a lot of things to see in the next days and my next one will be Sunday, at ITT in Tuscany. Stay tuned, it will be worth it.