Good Morning from Stage 3 of the Giro d’Italia

190km from Nijmegen to Arnhem; Giro d’Italia bids farewell to Gelderland with… a bunch sprint?

Nijmegen, 8 May 2016 – Good morning from Stage 3 of the Giro d’Italia, from Nijmegen to Arnhem (190km). The stage, after which the Giro d’Italia bids farewell to unforgettable Gelderland, is likely to end with a bunch sprint. 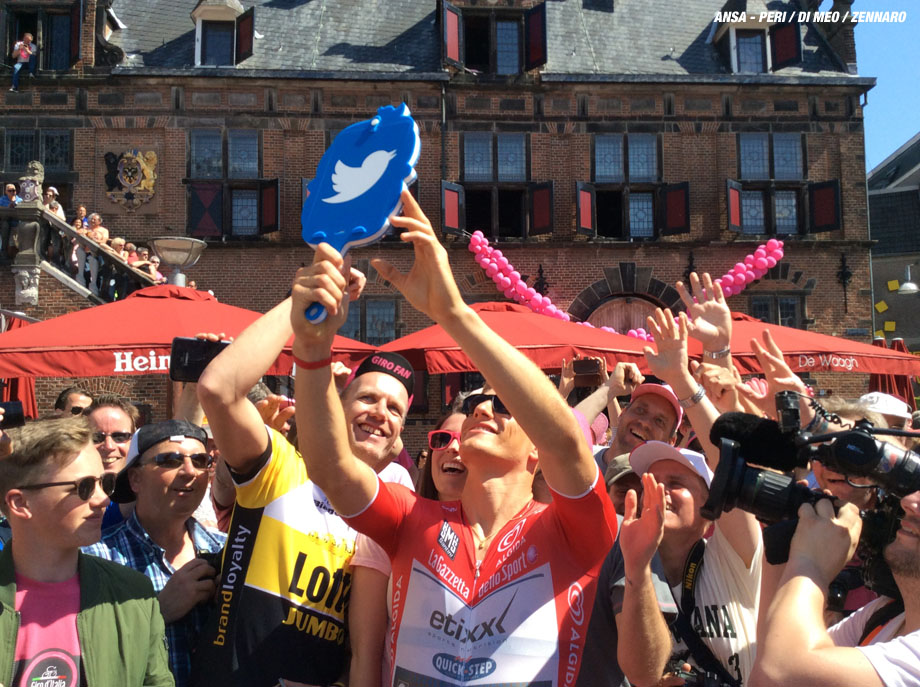 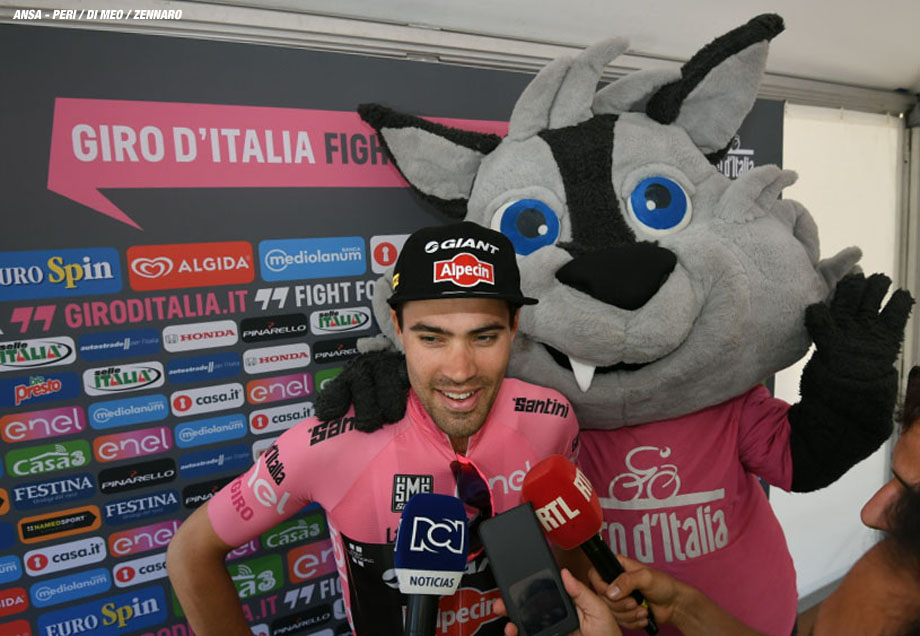 POINTS AND TIME BONUSES
During the stage, time bonusess of 13 seconds are up for grabs. A maximum possible 90 points are available for the points classification, not to mention 3 King of the Mountains points. 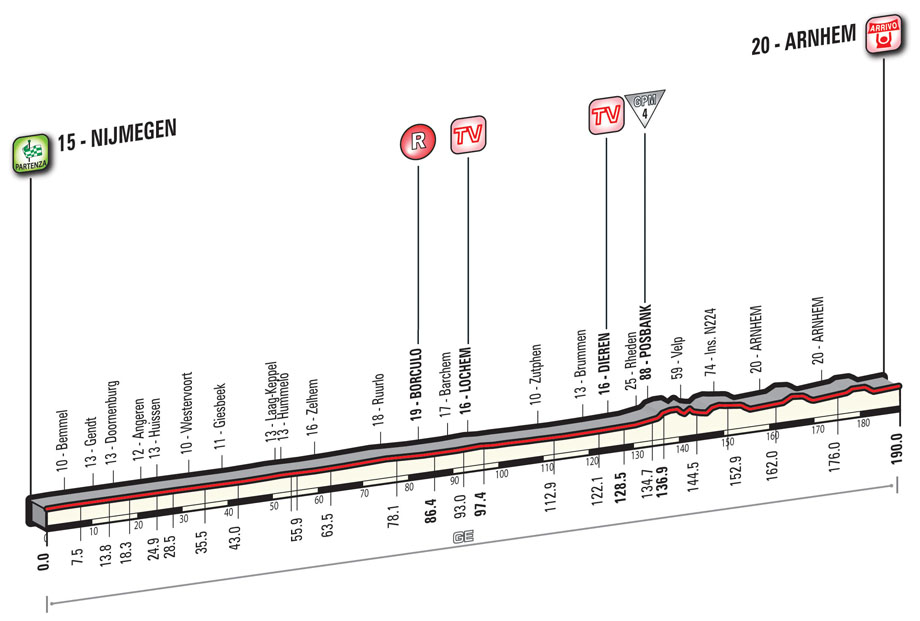 Route
The stage closely resembles yesterday’s: the route runs flat along the plains surrounding the start and finish cities, coming across minor climbs and mild descents, villages, roundabouts and speed bumps. Over the first 25km, the route winds its way on narrow roads twisting and turning along the banks of River Rhine. The route tackles the Posbank categorised climb, then a short and technical descent along the roads of the Hoge Weluve National Park leads into the final Arnhem circuit (14km), to be covered twice. In this stage again, wind is likely to be the major challenge.

Final kms
The final 14km circuit, to be covered twice, runs along wide, straight urban avenues, dotted with roundabouts. The route passes over the Nederrijn River twice, and then takes a short tunnel with approx 6km remaining to the finish. The home straight is 500m long, on a 7.5m wide asphalt road. The final kilometres are slightly curved, but with no real bends. 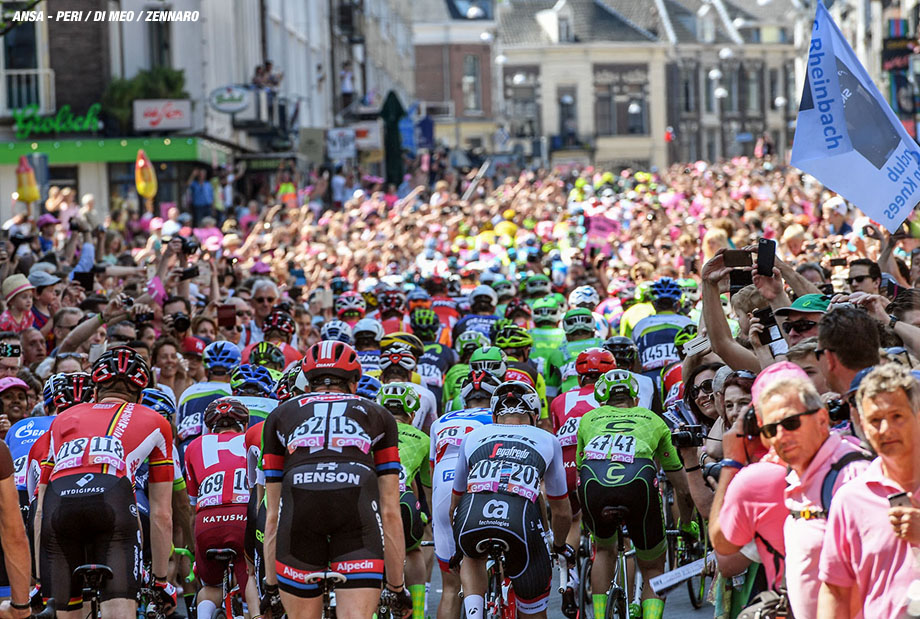 POINTS OF INTEREST
NIJMEGEN – km 0
Major landmarks include the majestic Waalbrug Bridge (1936); the old town centre with the Grote Markt; the iconic central square with its tangling streets and unique architectural features; the railway station and numerous well-kept parks. Main sights also include the unique structure of Wijnfort Lent, the modern and innovative Waalsprong residential area, and the student district, with its modern buildings, such as the Honingfabriek.

Nijmegen is best known for its annual “Nijmeegse Vierdaagse” (Four Days Marches), the world’s largest and most famous non-competitive marching event, which attracts tens of thousands of participants every July. Historically, the city is known for the “Treaties of Nijmegen”, signed by the Dutch Republic and the Kingdom of France on 10 August 1678, which played a major role in redefining the territory of the Netherlands.

Nijmegen was the birthplace of Pieter Kanijs (1521-1597), who was canonised and declared a Doctor of the Church in 1925, and the three Limbourg brothers (Paul, Jean and Hermann), the much respected 14th and 15th century engravers and miniature painters. After leaving Nijmegen, the peloton follows the River Rhine close to the 13th century Kasteel Doornenburg.

WESTERVOORT – km 36
The route leading back to Arnhem runs past the picturesque villages of Bemmel and Gendt, on the Rhine and Waal rivers, Angeren and Westervoort, the small towns Giesbeek and Laag-Keppel, with their peculiar buildings, including windmills.

BORCULO (feed zone) – km 86 and LOCHEM (intermediate sprint) – km 97
The route passes the villages of Borculo (feed zone), Barchem and Lochem (intermediate sprint), that are rich in waterways and many campsites. Next is Zutphen, the county’s main town, historically a dominion of the Holy Roman Empire, then the route runs along the banks of the Ijssel River, among the gentle hills and clay flatlands.

DIEREN (intermediate sprint) – km 129
The route runs past Brummen and Dieren (intermediate sprint), a busy Dutch holiday resort, with a few hot springs, that’s also home to the Gazelle bicycle manufacturer. The nearby town of De Steeg has a major natural history museum, the beautiful Middachter Allee avenue, and a number of woods and forests, including the Onzalege Bosschen – the “enchanted” forests.

POSBANK (KOM) – km 137
After running past Rheden, hometown to pro rider Erik Breukink (1964), the route tackles the 4th category Posbank climb. Next is Velp, home to a remarkable 12-century church and an impressive castle

ARNHEM – (1st pass – km 162, 2nd pass – km 176 and finish, km 190)
The route finally enters the city of Arnhem, passing different landmarks, including Castle Rozendaal, the Open Air Museum, the recreation of Burgers Zoo and the national sportscenter Papendal, home of many Gold Medallists at the Olympics. The finish line is set in Velperbuitensingel, but before that, the bunch must cover two laps of a circuit that runs through the heart of Arnhem. 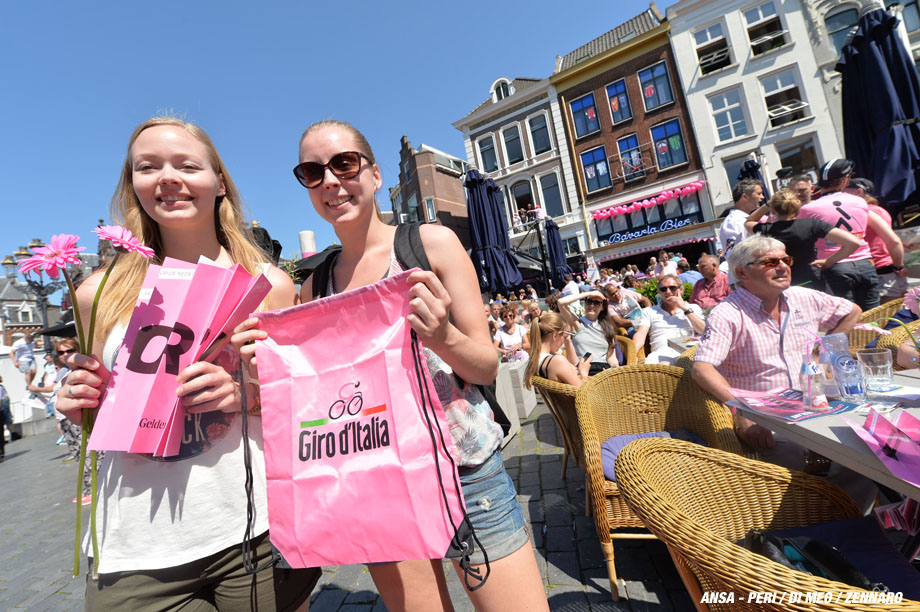 In France, the stages are live exclusively on beINSports, with reports and features from the scene.
The Dutch public broadcaster NOS is showing three hours of live racing of the first three stages in the Netherlands, as well as the final 90 minutes of the weekend stages in Italy, plus daily highlights of every stage.

Free to air race coverage is live in Flemish via VRT, in Danish on TV2 Denmark, in Switzerland via SRG SSR, in Spain via Teledeporte and EITB and in Kazakhstan, in highlights, on Kaz Sports.

The Corsa Rosa is live in Latin America on ESPN, with Portuguese commentary in Brazil, English commentary in the Caribbean and Spanish across the rest of South America. Colombian fans have a wide range of options, with live coverage on RCN and Señal Colombia. TDN is showing the race live in Mexico and Central America. beIN Sports is covering the Giro in the United States of America and RDS is providing French-language coverage in Canada.

The Giro d’Italia is also on the small screen in the Middle East and North Africa thanks to live coverage on beIN Sports, while in South Africa and Sub-Saharan Africa the Giro is on the Supersport channels.
In Asia, the Corsa Rosa in available in 16 countries via Eurosport Asia Pacific; J Sports is covering the race live and exclusive in Japan. LeTV is doing the same in China.

Race highlights are on FPT Telecom in Vietnam, while the Thai public can enjoy the key parts of the stage on both True Visions and NOW26.

The huge interest that Australia has shown in the Giro continues in 2016: SBS is showing all 21 stage live, while Fox Sports is showing highlights. In New Zealand, Sky is showing the race live and in highlights.

Finally, the Corsa Rosa is being shown worldwide via SNTV – Sports News Television and Sport24, the 24 hour sports channel for airline and cruise ship passengers.