Two of the favourites for the overall victory: Nibali won the Corsa Rosa in 2013, Valverde is participating for the first time. Here is an interview with them both. 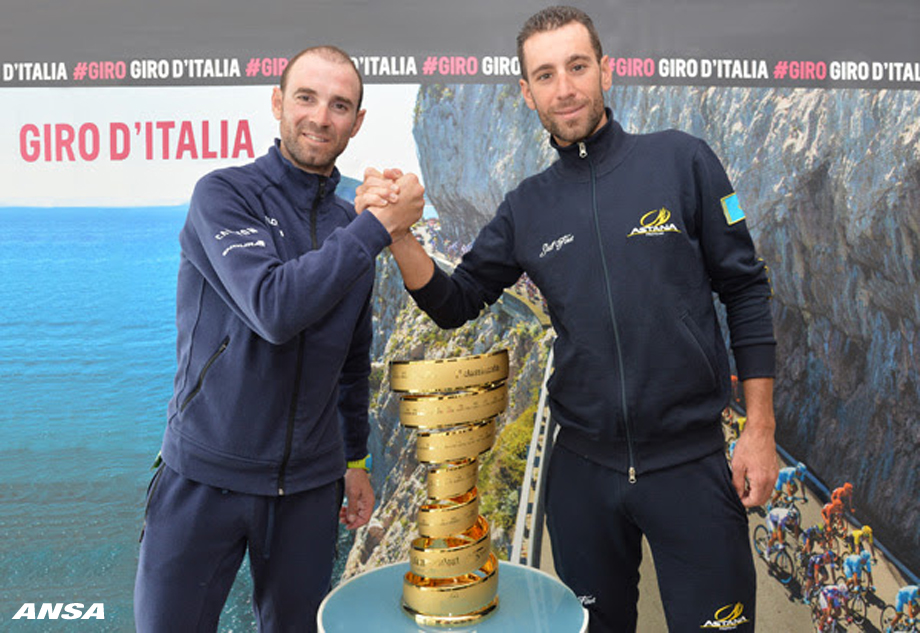 They’ve challenged each other directly in previous Grand Tours but never at the Giro d’Italia. Alejandro Valverde is ready for his first start in the Corsa Rosa, a race that Vincenzo Nibali has fought five previous times, the last time in 2013, when he emerged as final GC winner.

Q: Nibali, what emotions do you feel about participating in the Giro two years after your victory in 2013?
A: It will be very emotional because I think that all the fans are waiting for me. I will be highly determined. This Giro course is fascinating and perfectly suited to my characteristics, I want to face it in the best possible way.

Q: Valverde, how do you feel about racing the Giro for the first time in your career?
A: I’m extremely excited and very motivated. It’s a beautiful race and I want to compete at best of my possibilities to reach the highest goal.

Q: Nibali, who are your main rivals for the final victory?
A: There are many rivals and a few outsiders. I’m thinking about Esteban Chavez, a very strong young rider, and then of course Valverde, a very strong and consolidated opponent. There will be more of course.

Q: And for you, Valverde?
A: There will be many, many rivals. Nibali, of course, will be the most difficult one to beat but I have to mention Dumoulin, Chaves, Uran and others who will be very strong. We are here to wage battle everyday.

Q: Nibali, how can you win a second victory in a Grand Tour?
A: I don’t know, I’ll find out! This is going to be a very difficult Giro. You live a Grand Tour day by day, studying the course and the key points. Winning a second one is never easy but the experience I have accumulated in the Grand Tours that I rode and won could play out as a big advantage for me.

Q: The Giro has historically been a successful race for Spanish riders. Just to name two of them, think about Indurain and Contador. Is it an additional motivation for Valverde?
A: More than a motivation, I’m really proud of the great Spanish results at the Giro. I personally like the race and the country a lot and I want to do my best for me and for my team.

Q: Valverde, do you have a message for all the cycling and Giro fans?
A: I would like to wish all my best to all the cycling fans, in particular the Giro d’Italia ones. I’m very happy to be here with you.

Q: A message from Nibali to all the cycling and Corsa Rosa fans?
A: I hope I will give you a lot of fun. Follow the Giro d’Italia because it’s the most loved and the most beautiful race in the world. I’m waiting for you, my best wishes. An one recommendation: turn all the Giro roads pink!