Our PEZman in Italy, Alessandro Federico, will be roadside this weekend as the Giro d’Italia winds its way north. Last year he made the trip south and passed through many different regions to catch the race, the people, the villages and the atmosphere of the biggest bike race in Italy. But you can’t go to the South without trying the pizza!

There was no plan for today’s stage, but in the end we enjoyed the Giro even more than the other two days. A full immersion in southern Italy convinced us that we really live in a multi cultural country, and that our Italy is not so bad as local television and newspapers try to describe it. In three days we crossed four different administrative regions and more natural regions. All these place were all very different even if we are talking of a few hundred kilometers travel. All these place had something to give to us. And that’s what we had for today. 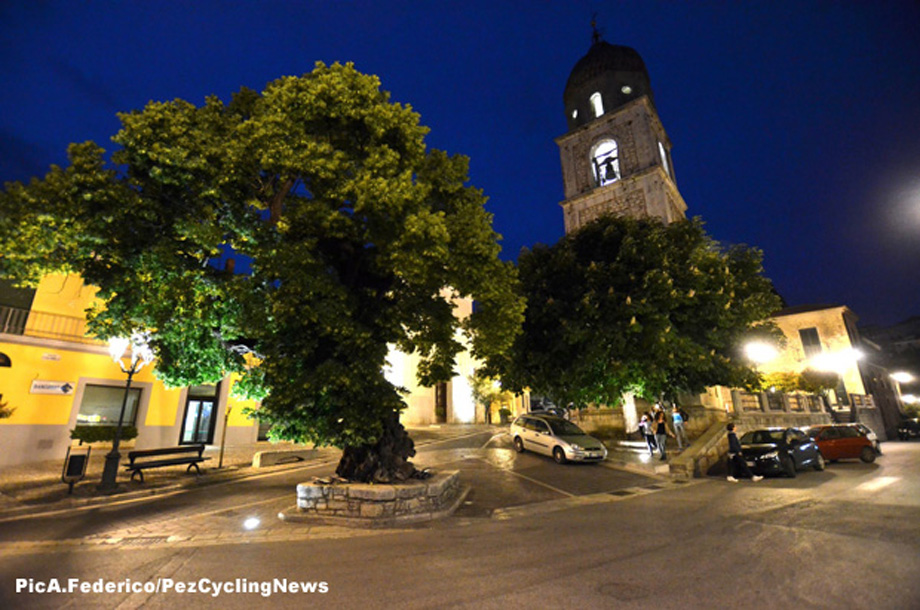 Fragneto Monforte by evening. A very quite place, perfect stop for a sleep

Il sonno and il Sannio
Sonno in Italian language means sleep and this is part of the story I have to tell about. We passed the evening in a very quite village, Fragneto Monforte, this place is located in the administrative region Campania (where Napoli is located), but in fact is part of an historical region named Sannio. I was sure we were going to have a good sleep there but in fact, due to my snoring this morning all visitors of the bed & breakfast were very upset. Salvo, my driver was the most affected, having slept in the same room, but also the others were complaining and specifically: Wei Yuet (a famous Japanese photographer) and two Belgian guys (fans of the Lotto Soudal rider Louis Vervaeke). My deepest apologies to all of them. 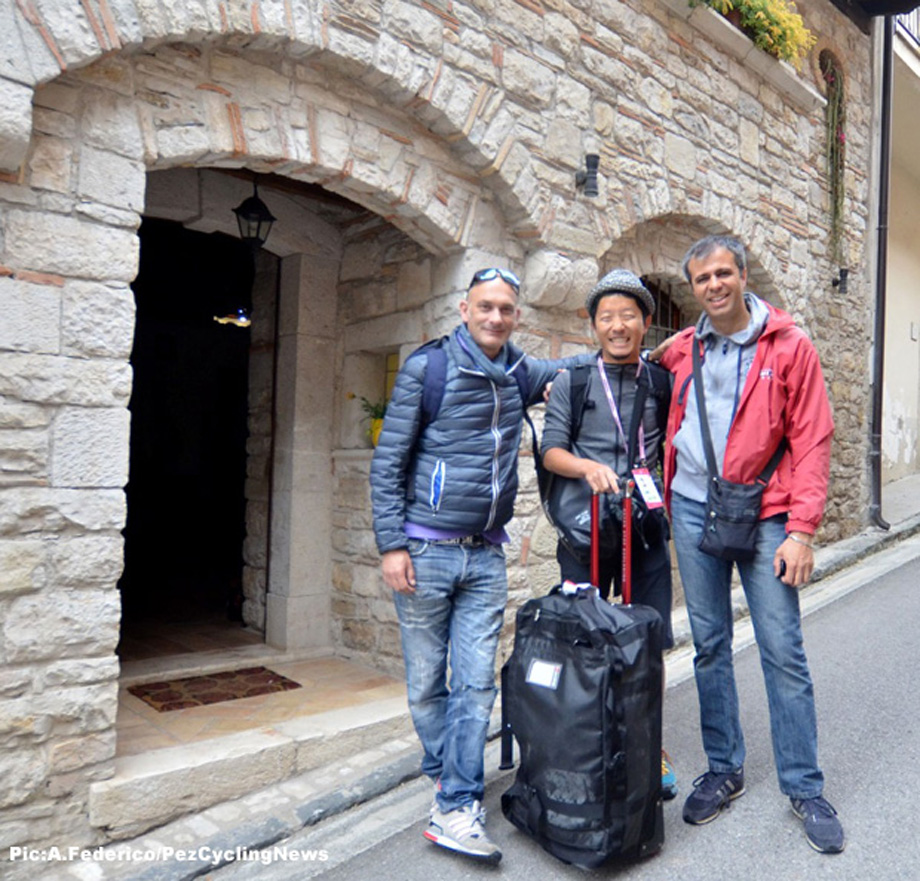 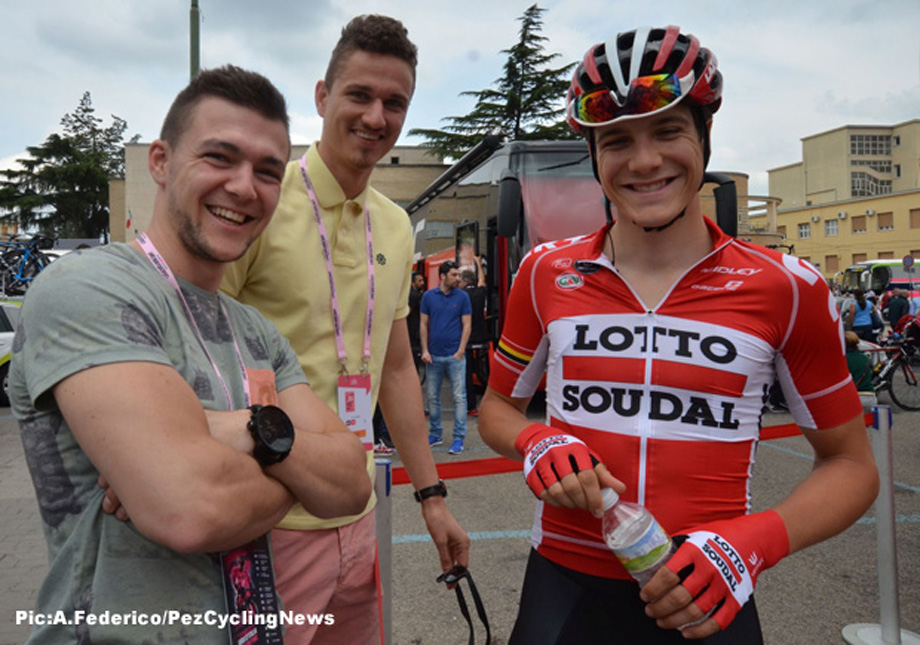 And these are the two Belgian guys with their friend Louis Vervaeke, a young climber, his first time at the Giro for Lotto Soudal

The land of the people
Two days ago we were surrounded by history and yesterday by the Apennines, today we were visiting the land of the people. We passed through several towns and all of them were nicely prepared for the race passing through and with a lot of people on the road. Young, old, families; the Giro is an opportunity to enjoy a different opportunity and seemed that nobody would miss it. 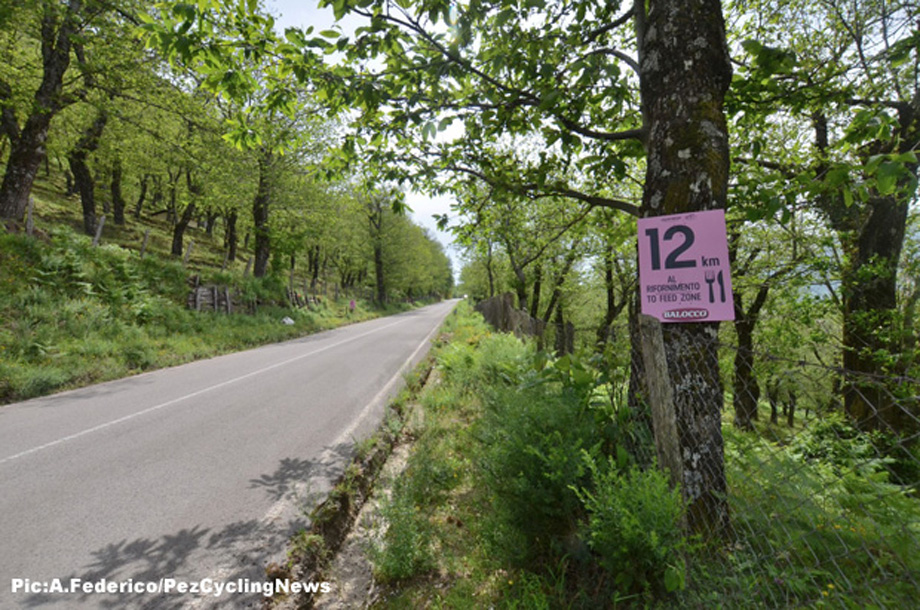 The road to Passo Termimo is the only piece without people, inside the forest up to the mountain 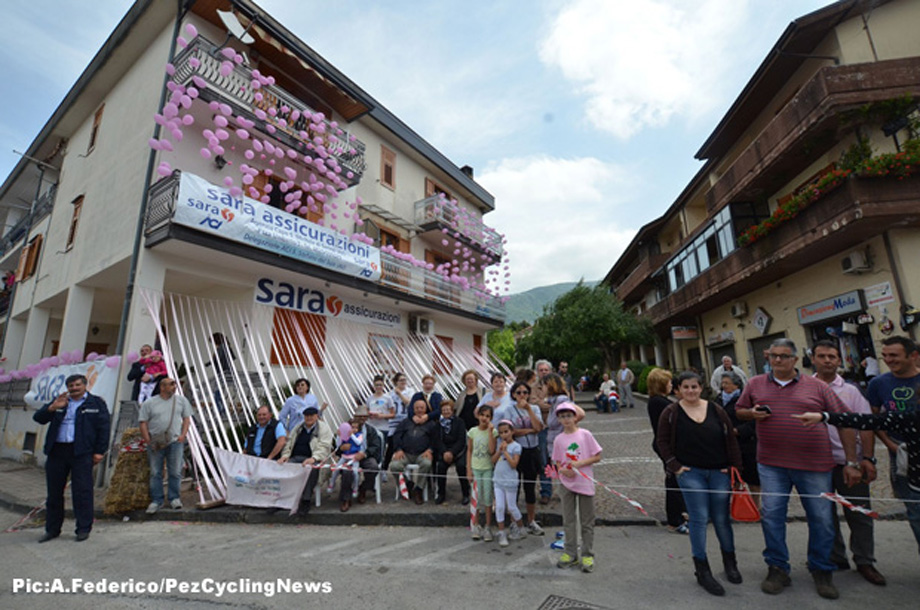 All towns are prepared for Giro passing through 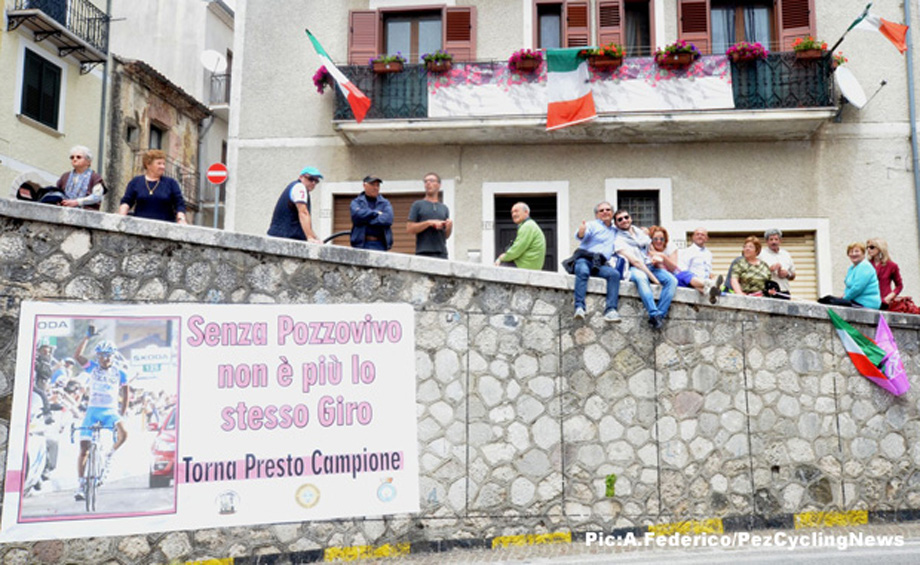 And Pozzovivo is still loved by the locals, even more after his bad crash in stage 3

But this is also the land of the pizza and in general of the good food. Whatever you order it’s good. The stage was another long one, about 230 km and was windy, and warm, and the roads were very twisty: a hard one. A break of 11 riders with some good names had not been seen since the very beginning, so the pace was high with no mercy for any riders that – after 8 days – are already done. 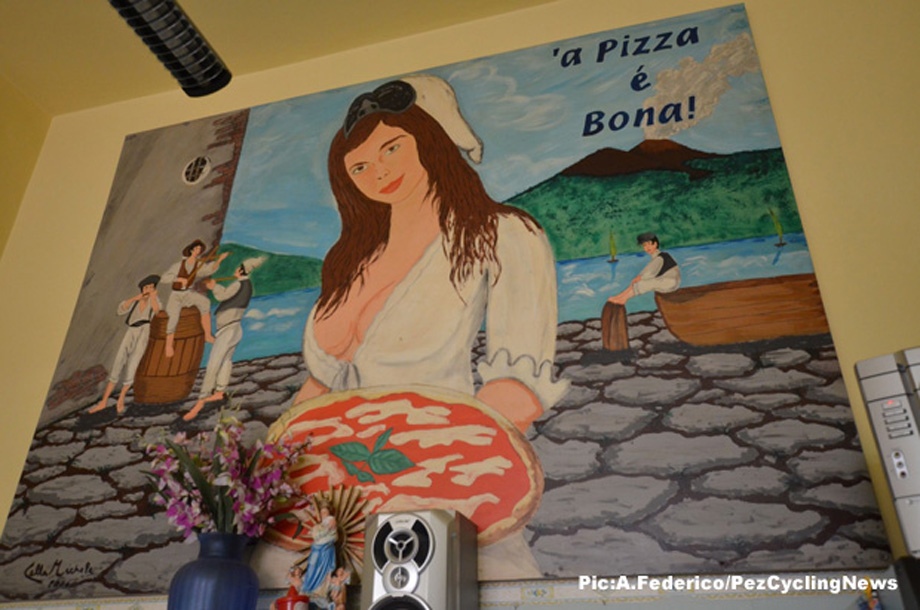 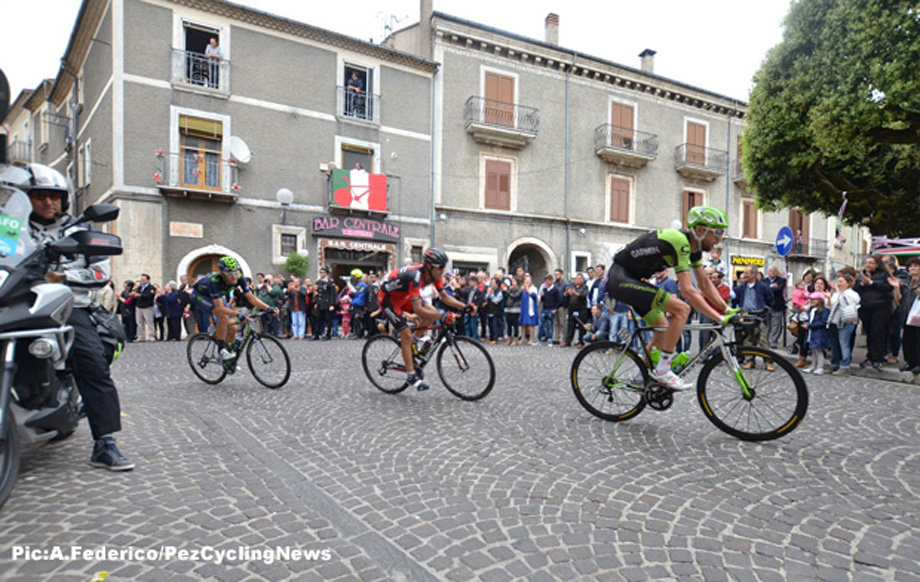 The breakaway passes through Bagnoli Irpino 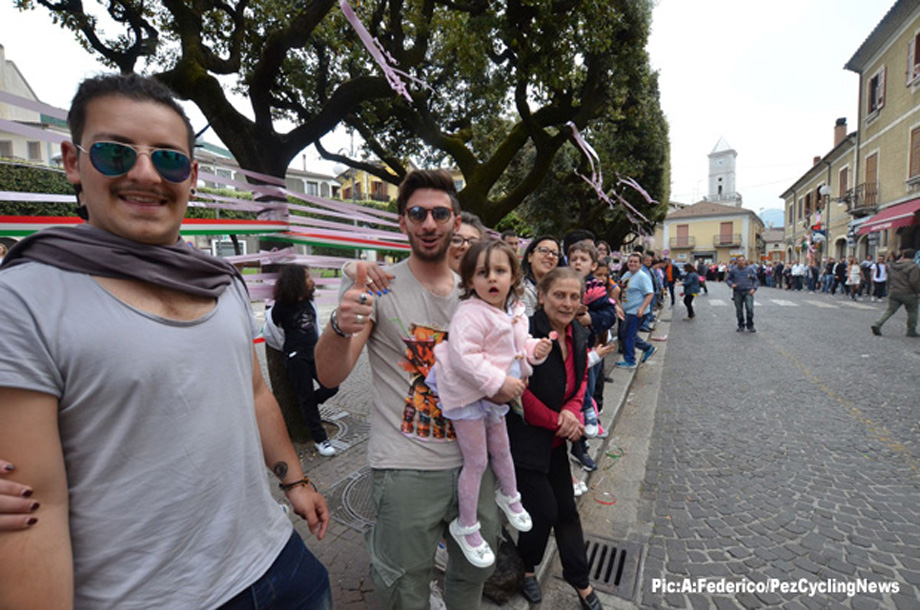 All the people are on the roadside for the passage

The transition
However, for anyone that needs it (us included), tomorrow is going to be the first rest day of the Giro. We are now transferring from the South back again to the center on the Adriatic sea, in Marche region. From first week to the second one, we can live the first transition. Now the general classification is settled and possibly nobody will really move till the ITT of Saturday. Today the rosa jersey of Contador was again attacked by Fabio Aru, while Porte is sitting on his saddle behind them. The Australian is maybe the most difficult rider to beat, considering the advantage he can have from the time trial. 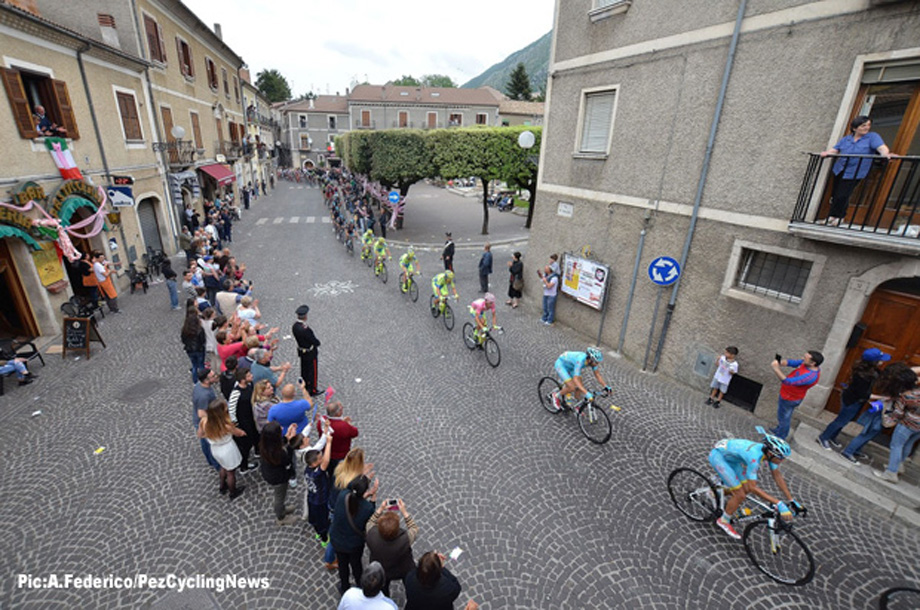 And then the bunch passes, lead by the Astana 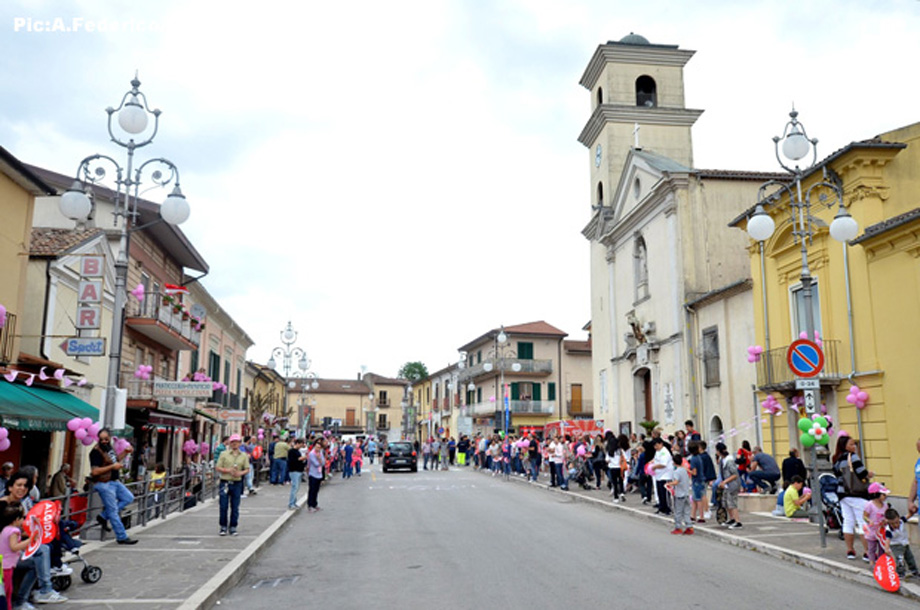 Another town, other people. Here we are in Pratola Serra

Last words
Words are anything for us. We play with them, we built a story, we have fantasies, but sometimes we have to know when to stop with them. The tale of the Giro is a multiple choice of events, of feelings. The race is a side, a great moment but a side of your day that is made in fact by people, by imagination, by dreams and by worries. I was a boy when I was imagining what I’m doing right now: telling somebody else how the day was at the Giro d’Italia, writing from a remote place (in fact with new technologies I’m writing from a car crazily driven by Salvo at 130 km/h on one lane roads), and now I’m no more a boy, but that heart is ever the same. The passage of the riders is the same emotion. The welcome, the motos, the officials, the screams. You know you are there, you say to yourself; you are there. I lived these emotions hundreds of times already but, believe it or not, every time it’s always the first time. 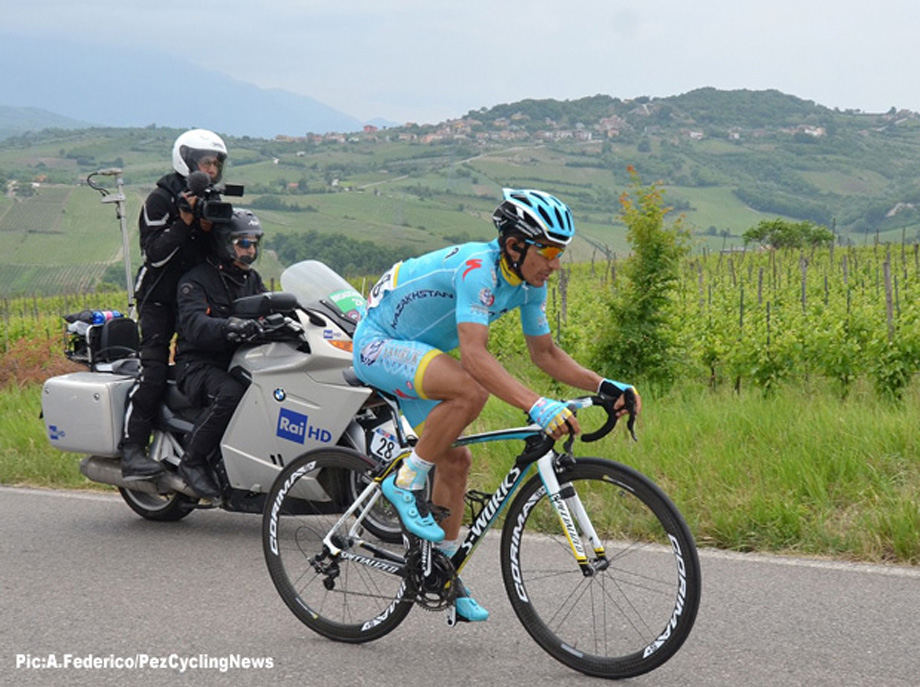 Tiralongo on the last climb of the day (Passo Serra) 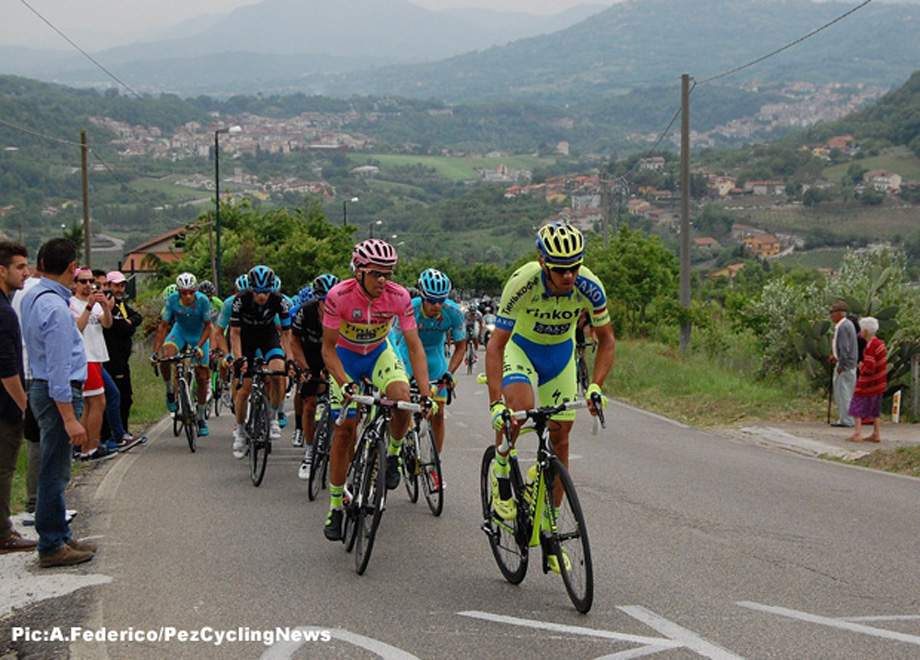 The last, last words
We play with words, we have to stop them. It’s the time to be back in reality and to leave the road to somebody else. My plan is to set my last stage next Wednesday, in my backyard, on the Romagna hills, when the riders will ride stage 11 from Forlì to Imola. These are the Pirate’s roads that every year are back again. But this, is another story. 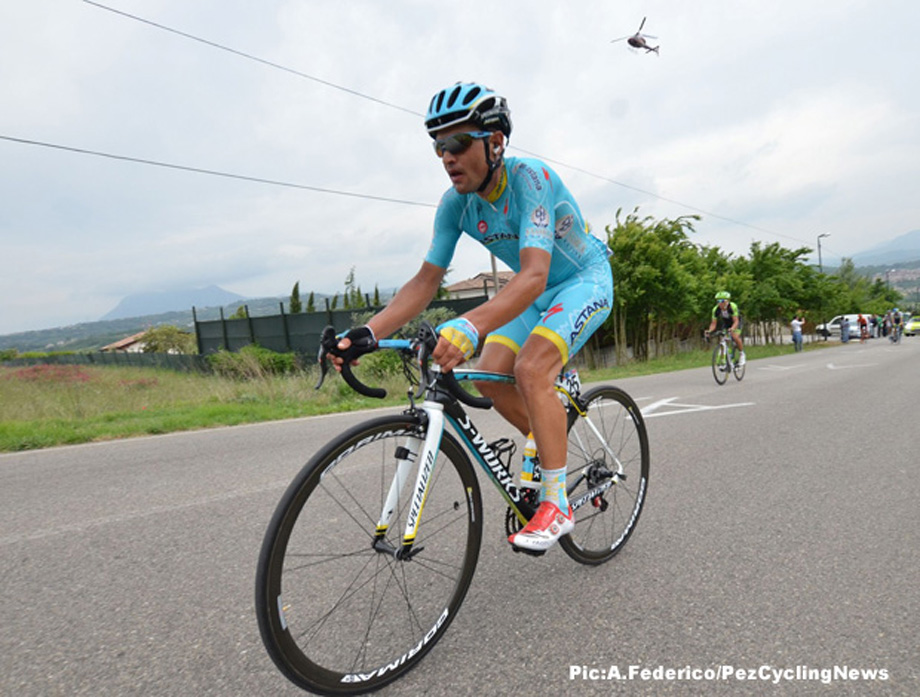 A spectacular image of an Astana rider climbing