Bella Velo girl Christine Vardaros has had a busy winter – joining Team USA for the ‘Cross Worlds in Holland, and then moving to Belgium to join her new LOTTO-BELISOL Team for ’06. Luckily she hasn’t forgotten us little folks, as she checks from life in the Big League…

Peanut’s assault on the European Cyclo-Cross Season – 23 December through 4 February
Six weeks ago, I arrived in Belgium to contest Cyclo-Cross World Cups, the World Championships and other top category events. What I didn’t plan on was flying over with the flu AND catching another flu and two nasty colds during my trip. Needless to say, aside from one podium placing and a fourth place, my designs on scoring big were squelched. In fact, the only reason I was able to race at all while being quite sick was because I had an amazing support crew… Ronny and Jenny literally delivered me to the start line and collected me at the finish while Jan Goeman handled my Rocklobster bikes. But on a positive note, chain-coughing has been great for the abs. I have not had to do a single abdominal workout to attain a perfectly sculpted six-pack. 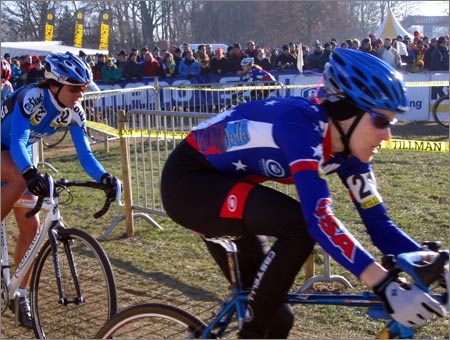 Here’s Christine racing at the Cyclocross Worlds in Zeddam.

Below is a photo of Daphny Van Den Brand in tiny bed as we waited to tinkle in Liйvin World Cup Doping Control that was stationed in a nearby daycare. After 3 1/2 hours, I finally peed into the cup in front of the race official while teetering myself over a one-foot high potty built for little kids. 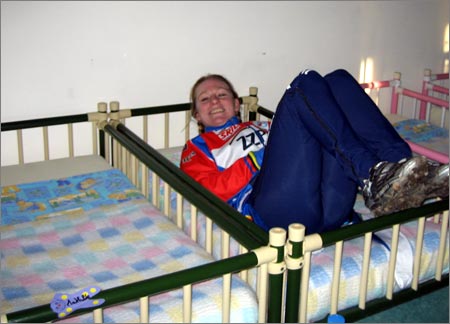 Home Sweet Home
I have been living with my friend Jan in a quaint town called Everberg – equidistant from Brussels and Leuven. Jan owns a wonderful bicycle shop there and lives in the adjacent house, while his parents live above it. It’s not an untypical arrangement in this country, where commutes are short and ties to one’s region of birth remain strong. To an American used to the consumer-driven rat race it looks like something out of a ‘30s Ernst Lubitsch comedy. The village is so small that it comes equipped with a coin operated bread machine on a street corner so the locals need not travel the cobbled road to nearby Kortenberg just to get their daily loaf of bread.

No town should be without its own fresh baked bread vending machine.

Belgian Culture
The first signs of Christmas holiday season I spotted were the multitudes of Suicide Santas hanging by nooses from house windows. Although seemingly an anti-christmas statement, they are intended to be decorative, along with those scary gnomes that over-populate their yards. They do beat typical American fare of plastic deer on sticks and all-year-round white christmas lights. Pink flamingos on sticks, though, are perfectly acceptable. 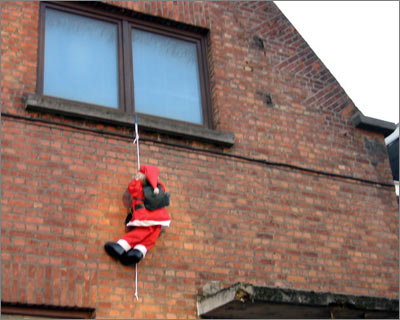 SUICIDE SANTA found on a house on the Ring in Leuven.

The strangest tradition I experienced was the Driekoningentaart (Three Kings Tart) only sold in the pastry shops on 6 January. It was created in celebration of the three wise kings’ visit to Jesus. They came bearing gifts and so did the tart. I bit into it and was lucky not to break my tooth on a colorful porcelain king buried within that I mistook for dried fruit. 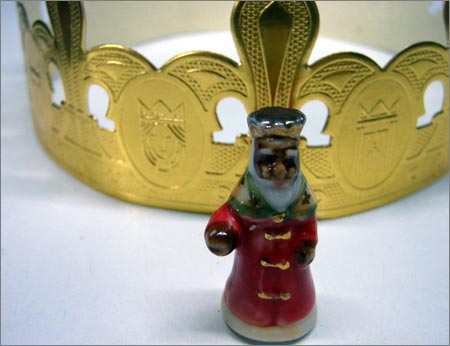 Careful… these PORCELAIN KING’s will sneak up on your from inside a sweet tart.

Suffering from sweet-tooth syndrome, I was pleased to learn that vegans can have fun here too. Most sweets sold in budget grocery stores are made with margarine instead of butter. Even Nutella comes in a vegan version! The one delicacy I have yet to find, however, is vegan Peperkoek (honey cake.)

Bike Culture
My first outdoor training ride was on Christmas day. A few of us, including my friends Jan and Ronny, rode over to pre-ride the Hofstade World Cup course 20 km away. On that ride, I learned the fourth most important word a cyclist must know – “Yoep” (pronounced YO.) It is how cyclists greet each other in passing. Heck, I would move to Belgium in a second if it would guarantee that I will not be subjected to one more “Howdy!”

On subsequent training rides, I quickly noticed that the average age of guys riding their bikes is over sixty. I would guess that this bespeaks their level of respect for cycling. In Belgium, professional cyclists are elevated to celebrity status. Not only do bike racers have their own trading cards like baseball players in USA but the cards are actually in demand. I have handed out almost a hundred of my Velo Bella cards at each cyclo-cross event – without having once resorted to coersion. 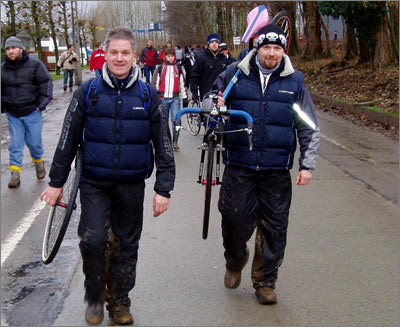 You can’t survive the Belgian ‘cross scene with your own posse.

My most impressionable day on the bike was a cyclo-cross workout I did with the juniors and U-23 riders of the Belgian National Team. I had the priviledge to watch how these talented cyclists glide over mucky undulating technical terrain. I was also impressed by the professionalism of the workout. Following each incredibly silent lap in the woods, the riders were greeted with snacks, drinks and mechanical support while given instructions from National Team Coach Rudy DeBie.

Bike races in Belgium are like nothing I have experienced in USA. Not only are there far more spectators per event (an average cyclo-cross race in Belgium draws 12,000 versus five-hundred in USA) but the attitude of the spectators is completely different. In America, the onlookers consist mostly of racers and their loved ones. In Belgium, the spectators are more reminscent of those who would attend a Major League baseball game. The fans know the names and stats of the racers, but usually do not know them personally. They are there to cheer for their favorite contender, grab a waffle, maybe some frites, a bier and a small shot of Jenever (a clear hard alcohol that is often served at cyclo-cross events to ward off bitter winter weather.)

It also pays to room with the guy who owns a local bike shop.

Cycling is so popular here that there exist two cycling reality shows on the primetime television. The most popular is “Wellens & Wee.” It is named after Bart Wellens, former two-time Cyclo-Cross World Champion, and follows the daily activities of the Fidea Pro Cyclo-Cross Team. Last weekend, the team celebrated a first and second place at World Championships with team members Erwin Vervecken and Wellens placing 1st and 2nd respectively. (On a side note; I was spotted on the show last week! They were filming Wellens’ girlfriend and pro racer Veerle Engels at Hoogerheide World Cup as I passed her. Neener-neener.) 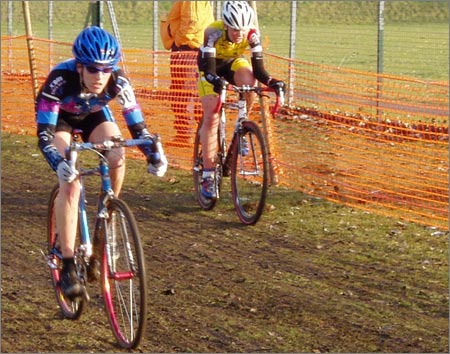 The other show is called “Allez, Allez Zimbabwe”. Former Cyclo-Cross World Champion and four-time winner of Paris-Roubaix Roger De Vlaeminck started a team consisting of six guys from Zimbabwe. The show details their progress as they struggle to become respectable bike racers. In Belgium, the show is rather controversial.

Many Belgians are upset that these cyclists, lacking the polished skills of the locals, are crashing into top racers, causing mayhem and resentment. At the World Championships, they were responsible for so many incidents (including my US teammate Troy Wells’ kiss with the pavement two seconds after the start that left him with a torn face and broken elbow) that they were talked about more than the winners of the events. Some Belgians are also upset that valuable financial and product resources are going to these riders when promising Belgian riders aren’t even getting support.

Lotto-Belisol Team Meet-and-Greet
A few weeks back, I joined my new road team, Lotto-Belisol – Belgian-based UCI Trade Team consisting mostly of powerhouse Belgians – and a few resident aliens like me and Australian superstar Kathy Watt –for a team meeting. When I first arrived at the cycling clubhouse – which doubles as the Irish cycling house, the other gals were a bit hesitant because I was a new face and spoke American slang. 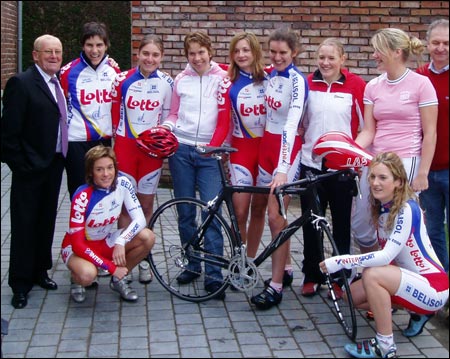 The new LOTTO-BELISOL TEAM – that’s Christine on the left.

First, we tried on the team kit and casual wear. As usual, the whole team wore size small while I was the sole size large (hey – that’s mostly due to height!). I couldn’t help but think how cool it is to be on a team that is so professional that they even have multiple levels of casual wear. My favorite was the baby pink capris sweatsuit with white stripes down the side.

Next, we donned our paper-thin skinsuits for photos taken in -3° C weather. Once thoroughly chilled, we changed into our warm kits and took off for a ride. The outing was only two hours long. But within that short period of time, my sit bones suffered! Since i had no opportunity to get off the saddle due to the slow pace and impossibly flat terrain, my expiring butt passed through all five stages of death as defined by Kubler Ross – denial, anger, bargaining, depression, acceptance!

On the upside, as I rotated through the paceline, my teammates got to practice their English while I learned valuable Flemish words to include the three most important ones needed on a group ride: rechts (right), rechtdoor(straight), and links (left).

Check out the Velo Bella gals online at:
• www.VeloBella.com
• www.ChristineVardaros.com

The Burke Report: Must Be The A/C