The European cycling scene is a mighty big place to cover, and to prove it we’re welcoming today our second Bloke en France. Ben Clark’s living the dream in northern France, and in his first installment finds dehydration sticking to him like his shadow and gives suggestions for audiovisual entertainment while recovering from it…

After becoming Vice Champion Espoir of Calvados (and only receiving a small bunch of flowers and dehydration for my trouble), my next espoir race was to be an important meeting as I was determined to show that it wasn’t a fluke ride and that I merited the position. Montpinchon is probably THE hardest espoir race ever (maybe after the espoir world cup in Frankfurt, but more on that later).

The course consists of 9 laps of a circuit covering 140km in total. The finish km is a long hard straight climb lined by thousands of drunken know-it-all old French men and a few cute girls who just want to cross the road to get to the funfair on the other side. The road then descends rapidly before kicking up again, and again, and again. Making my life even better was the roasting hot temperature and lack of any wind. (At the end we worked out that I drank over 12 litres of water, or rather poured most of it over my head, during the race).

A small but definitely talented field lined up with the usual suspects, APN, Jean Floche, and Rouen bringing their big hitters. Busy laughing at another rider, who despite emptying 2 whole bottles at it and flapping like a madman, still couldn’t get a wasp off his bike, I nearly missed the start having mentally blocked out my manager already yelling down my ear over the radio. Manu FM (Manu is my brilliant manager) was to be my company over the next 4 hours giving me the most important info like time gaps, who’s been dropped and that there’s a cute girl on the next corner (you think I am kidding!)

First climb and first crash and the race splits into 3 groups with yours truly looking like a right prat in the last group. Getting fed up and getting a headache from the shouting in my ear, I jumped away to try and get across to the next group on my own as no one else seemed capable of doing it. I then spent the next 3 hours on my own, catching other groups and going straight past them. I eventually found another rider who was able to stay with me and we rode steadily until we caught a group about 2 minutes behind the leaders and where my legs finally gave out.

I finished in pain and dehydrated (again!) to find my so called team mates sunbathing and enjoying the funfair! Bastards! 2 hours later, I was back in my small apartment in a converted garage trying to figure out why my internet wasn’t working, why I seemed to have the entire French population of flies in my kitchen or what I was going to eat and more important what DVD I was going to watch tonight!

This week’s must have music for your mp3 for training:
Special D – Come with me
Blank & Jones – The art of life
Rezidents – Popcorn
Three of a kind – Babycakes
Estelle – 1980

This week’s must have DVDs for those lonely nights (awwww):
The girl next door
The butterfly effect
50 first dates
Seeing other people
The Boondock Saints

p.s. those of you wondering about that espoir world cup in Frankfurt. Picture this, it’s your 19th birthday, its pouring with rain, the start features 35 tram lines to cross and oh its 6am and you’re eating badly cooked pasta! Enjoy! 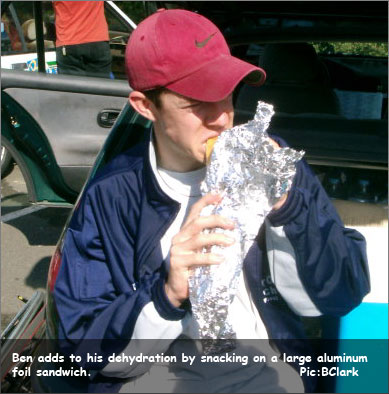 I spent two years on the Great Britain team, one on the Junior squad and one on the NODP (National Olympic Development Program) before taking the plunge and moving to France last year. I spent my first season with a small Div 2 team on the west coast, which was a real eye-opener especially as a lot of the organising fell on me!

After gaining my Elite 3 licence, I was approached by a bigger Div 2 team in the north of France and this year have been racing for VC Bocage-Vire based in the Calvados region.
I am from the south west of England and the countryside here is virtually the same. Small sharp climbs, long drags, green fields, cow muck and so on.

The main reason I am in France is that the cycling scene in the UK is virtually nil. There is no funding, no sponsorship, a severe lack of races and a very small pool of top class riders. In France, cycling is the lifestyle, from tiny villages organising Elite races as part of the village fair to city centre crits with thousands of screaming adoring fans…

I love France. I love the laid back lifestyle (although it does get a bit too laid back when you arrive at a race 5 minutes before the start!), the people are so much friendlier here and a lot more social. I am lucky that I can speak pretty much fluent French and that I am not exactly shy, so mixing in with my team mates and locals wasn’t a hard job for me. You get some riders in races that really piss you off but you tend to find that it’s not only you getting annoyed. The big problem with the French is how stubborn and arrogant they can get, but I’ve found that simply acting like them, gets them all flustered as they don’t expect it from johnny foreigner.

I intend to come back here next year as I really enjoy the races here, my team mates are brilliant and I like the region. Next year, I will be concentrating on the bigger Elite 2 races after having a successful season so far in the DN 2 Coupe de France races.