Bonjour! Ca va? It’s time for another update from our Bloke In France. It’s been an interesting few weeks for James, as he test drives a new hair color, flips the bird, and gets back to racing in the South of France.

You Lookin’ at ME???
Right now I have the attention of the entire cafe. In a bored moment I made the fateful decision to dye my hair, and my peroxide topped appearance raised a few eyebrows when I walked in a few minutes ago. I’ve decided to keep a low profile in a quiet corner with my MP3 player and pretend that the staring has stopped. You’ve probably guessed it’s a conservative town. Well it was at least until we all arrived. 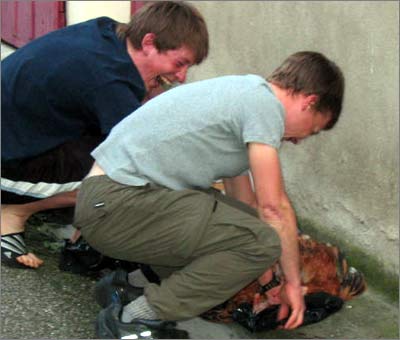 Life in France has many strange and wonderful differences from home…

Flippin’ The Bird
Besides my style-related mishaps I’ve been doing a lot of bike riding. It never ceases to amaze me just how much self-inflicted suffering is possible on a machine as simple as a bike; but that suffering is nothing compared to what happened to a chicken outside our house last week. My two housemates Marc and Jonathon decided to take a trip to the market in Mirepoix, a town about an hour’s ride away. Jonathon decided to buy some fresh chicken, the problem was that this chicken was so fresh is was still very much alive and clucking when they brought it back to the house in a box. Following much deliberation as to the best location, Marc our resident Master Chef slaughtered the bird in the street outside the house. Following a lengthy plucking session and some great cooking skills we all enjoyed a honey-roasted feast that night courtesy of our former feathered friend. 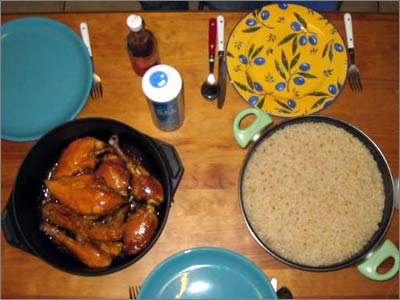 … which often lead to strange and wonderful tastes…

Now to the bike riding
I’ve raced seven times this season and I can’t say that it’s gone great so far. After a promising start in Spain where I felt my winter training had paid off I hit a wall of bad form that I just couldn’t seem to get through. I felt like the bunny in the Energizer adverts that’s always getting his butt kicked. I kept telling myself that it was just adapting to racing, after all I don’t think you can ever truly replicate racing in training; but the truth was, something was wrong, I just didn’t want to admit it. I kept taking a kicking in the races and feeling less than normal. It all finally fell apart a couple of weeks ago when I dropped out of a race early, started being sick, then sat shivering in the team van with the heater blasting, wearing all my clothes and the soigneurs coat for the next two hours. Following that I took it easy for a week and now things seem to be back on track. 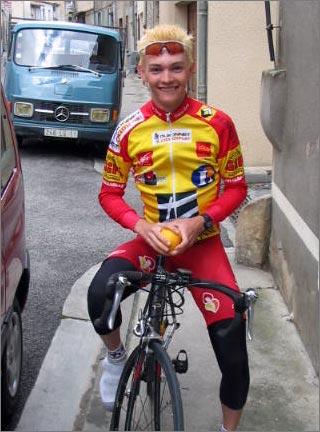 Suicide Blonde: Apparently the shock value of peroxide is something that crosses in many cultures.

I had a good start in my first UCI race of the season: Bordeaux-Saintes but that went pear shaped (wrong) when I got caught up in a crash. Now I’ve just got to prove myself to the team again. I think they have been wondering why they bothered to bring this English guy over! I keep telling myself that the season is long and there is plenty of time to prove myself. This weekend should be a good place to start. I’m racing in the North of France in Brittany. Two 160km days of racing with the cream of the French amateur circuit. Should be fun.

So things so far this season haven’t gone all according to plan, but most things in life rarely do. Probably most importantly I’m in a good mental state and I’ve been learning a lot from the racing, even if I haven’t been getting any great results‚ and of course it could always be worse, I could be a chicken.

James lives in Limoux in the south of France,and rides with the CA Castelsarrasin team in the highest category of amateur team in France, DN1 Espoir. It is set up to aid the development of Under 23 riders. The team, its sponsors and support staff provide the opportunity and support to race successfully at a high level. The team is aided by the management and support of Didier Rous and Brioches La Boulangиre.