Bloke In France: Looking Up!

In our weekly dispatch from the Euro-trenches of pre-pro racing, our Bloke in France – James Hewitt – rides his best race of the season, testing his form and helping his team win the overall…

The last time I wrote an update on my life on the Continent I hoped that the next installment would recount some spectacular racing performances. I’m pleased to say that this is the case. The season has FINALLY kicked off with an individual and team win last weekend. On a personal level, it’s unfortunate that the individual win wasn’t mine. I certainly worked my British butt off to ensure my team mate did, and got a lot of satisfaction from that.

A TURN FOR THE BETTER
After some trials and tribulations with form and health in the early season I got my training and racing back on track and was put to the test in the UCI Tour de Gironde (in the South of France). Our team sent six riders with the hope of picking up a stage win. We were pitted against a strong contingent of teams including some Division 3 pro teams and a selection from la crйme of French amateur racing. After four days and five stages of racing we got more than we bargained for in the best possible sense of the phrase. 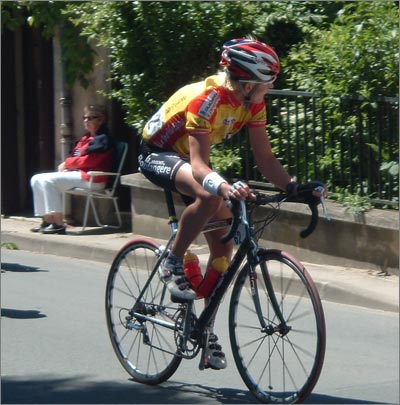 James! Stop looking at the French ladies and pay attention to the road!

My job was to get our team leader, Vincent, up to the front, provide bidons and support, and work to chase down any escape that our team was not in. The Director Sportif told me to go all out to achieve this and then drop back if I blew up. It was a great opportunity to see what I was capable of without having to worry about conserving anything. The best part of this turned out to be the fact that I didn’t blow up and managed to work throughout the stages.

Bad Luck In Two’s
Vincent finished consistently in the top 7 each day and after making the break on the fourth stage following some serious work to keep everything together in the morning he took the leader’s jersey. The afternoon’s stage began well for me. I chased down some dangerous moves and worked to help Bastion up to the front a few times as he was trying to contest for the Mountains competition as well. Unfortunately for the team, one of our strongest riders punctured and had to chase back on. This service had forced our team car to the back of the caravan. To make matters worst, a second rider on the team punctured. We were both riding near the front in the top 10 ready to cover any attacks when he told me his rear tire was deflating. 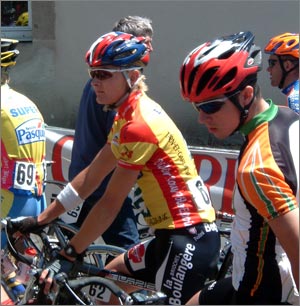 As he was the second best placed rider on GC in 15th spot and I was the humble domestique I stopped and gave him my wheel. I then had to wait until the entire peloton and caravan passed before the team car arrived. After a sketchy service in which my chain fell off I got going and tried to catch the peloton which was by now hammering out of site at 50+ km/hr.

Playing By The Rules… Unfortunately
Now I know lots of you readers will probably disapprove of this, but it’s pretty standard practice for your team car to “assist” in catching the peloton following a mechanical problem (just ask Homeboy Nathan in Spain! – ed.). Luckily for me, a Commissaire motorbike ensured that I did not have to lower myself to this by banishing my Director and the mechanic up the road. I was then left to hammer myself into the ground until I pushed it a bit too hard and the rubber side went up.

Hitting tarmac at 65 km/hr sounds pretty nasty and it is. Although I wasn’t seriously hurt the amount of blood resulted in the medics convincing me to stop. So there you go, my race was over. I was able to stand on the podium with the team to collect the team prize the next day but at the time I was gutted.

Thankfully, I was back on my bike on Tuesday without any lasting damage. Time is a great healer of skin and emotions. The nature of bike racing entails that accidents will happen. I banished my demons yesterday with a long ride in the high Pyrenees. There’s nothing like some pure suffering in the mountains and high speed descents to get the mind and body back in gear.

This race held mixed emotions for me, from elation to despair. On the whole, it was a positive experience and I really enjoyed working together in the team for a common goal. Especially as we achieved it!

So until next time, as my last coach used to say “just stay upright”!