Bloke In France: Racing The Nats

Following my usual procrastination of drinking coffee in the square, I’m going to spew forth a conglomerate of my musings from the past weeks’ French Team Time Trial Championships to my National Road Race and maybe something extra…

French TTT Championships – Espoir
July 18th – I’m sitting in the team car right now on my way back from the DN1 Espoir team time trial championships. In truth, writing is a good way to use up some time because its a super long drive from Poitiers to Castelsarrasin. (Oh the wonders of technology) After that I’m driving my own car back to Limoux that’s parked up in the Service Course. 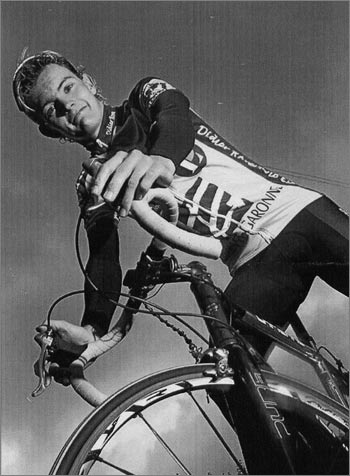 I’m feeling good if fatigued. The race was super hard; “au bloc”‚ all the way as the French would say. Our team finished 8th out of 27 so it was a reasonable result as at the beginning of the season we had targeted the top 15. Of the six man team the time was taken on the fourth. Five of us finished and we all had a good sprint for the line with a super styling lunge to go with it. The rolling course gave us some difficult moments as we tried to combine the climbing talents of some of the riders with the strength of the rolleurs. In the end it worked out OK.

Of course, there’s always room for a lot of improvement. This is a good thing because if we’d done everything perfectly and we only got 8th then I would be pretty gutted. It also happened to be my longest TT ever at 55 km.

I’m also quite pleased because I think my performance bodes well for my place on the team for next season. I’m planning to stay in France next year. That’s unless some huge Div 1 Pro team notice my talents (… JOKE!). That’s not to say I’ll never get on such a team, its just going to take a few more years of work. I’ll get there in the end! 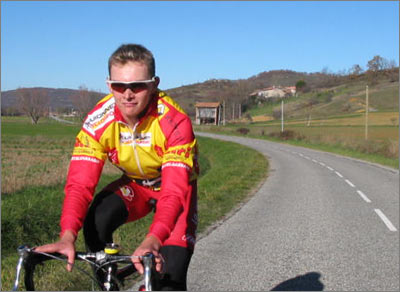 Tapping out the lonely miles on the road to the top…

National Espoir Road Race
July 27th – Two days after the National Espoir Road Race. I could have written this on the day straight after the race. The only problem is that I was so p*ssed off at the time it probably would have been unprintable. This race was a big goal for me. I worked hard, I controlled everything I could, but on the day I couldn’t pull it off. After gambling on the return of the early break my bet paid off as the race regrouped once we hit the finishing circuit.

I made some big efforts to escape but couldn’t get away. Following one such attack on the lower slopes of the steep finishing climb, a counter attack went which I was unable to follow. On the day, I just didn’t have the legs. I’m not sure what was wrong, but I just didn’t have the form that I’ve had in the last couple of weeks. Well, that’s just racing. Once the break had gone, I was racing for a minor placing and frankly, I lost some motivation. I felt weak, I felt sick. It was over. This isn’t the first bad race, it won’t be the last. The key is to be philosophical. Learn from it what I can and move on. Tomorrow’s another day, this weekend is another race. C‚est la vie.

Things have been pretty tough. The season is long and right now I’m feeling it. Two days after I flew back from the Nationals in Britain I drove up to Brittany (9 hours drive) with the team for another stage race. All I’ll say about that now is that it was super tough but good fun (if you like fast, wet descents). They say you should do one thing every day that scares you. I got plenty of shockers in that event. Now I’m back from the North to the
sunny south again, I’ve done my washing and I’m packing again for my next “course etape”‚ over this weekend. It’s a lot of travel, a lot of racing, but the truth is, I wouldn’t want it any other way.

For now, I’m enjoying the journey; the trip through the ranks to an eventual pro contract. Oh yeah, I’ve rediscovered the Smashing Pumpkins thanks to borrowing my friend Marc’s CD collection for my iPod. All I’ll say is “1979”. Have a listen, it’s a nice track but just remember, as the label on the screen of the iPod says: “Don’t steal music!”

I’m sure all of you upstanding PEZ-Fans out there would never
stoop to downloading music off the internet without paying for it anyway!