The PEZ-Crew keeps on winning – this time in sunny Oz as our Chris Selden trades pulls with some Euro-pros to their mutual benefit. “Well the last few weeks of training here in Australia have produced some interesting rides, stories & experiences…”

… Everything from the usual spin along the beautiful beachfronts, to long base-mile cruises with the returned euro pros & even some hill climbing efforts in the hinterland. Now before people laugh – yes there are hills in Australia & while we’re not talking Mt. Ventoux or anything, there are still some good climbs. You can always get a good workout simply by riding a few miles inland away from the coastline. 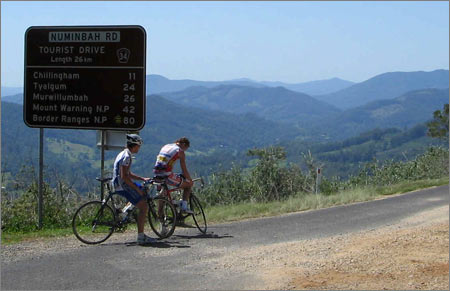 It hasn’t all been beaches, hills & long rides though as every Sunday I ride out to the local race & take on the other locals, euro pros, visiting cyclists from other states & anyone else who turns up. These are good fun races that always seem to get a good turn out & the pace is always on. There’s nothing like swapping off turns with some pros at 45kph to get the heart pumping!

The New Lotto Domestique?
The first week’s race I managed to find myself in a break with Gatesy from Lotto & a few others where we worked well & were clearly going to be fighting for the win together. When Gatesy attacked near the end, I let him go & slowed down the others so Nick could get the win as payback for a good interview the other day – or maybe I knew he’d pay me back another day… 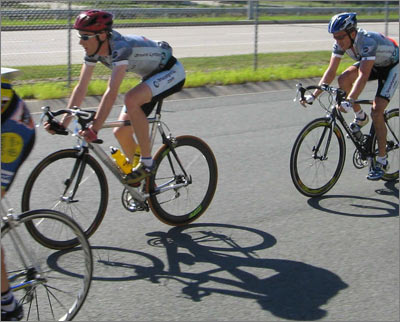 Well, come next week’s race, different circuit, different breakaway but Gates & I were there again so this time when I attacked near the finish, Gates blocked it up & I rode away for a clear solo win. Whilst a win at the local interclub race isn’t exactly one to go on the resume, it always feels good to cross the finish line first & if I can do that while having one of the best riders in the world work for me??? Well, that doesn’t happen everyday so it was a good day.

The Bloke’s New Wheels
After the high of the race win, the form went downhill slightly though as I was carrying a minor leg strain & knee trouble which led to less speed & worse motivation. Now what does any good cyclist do when they start riding poorly?? They blame their equipment of course! 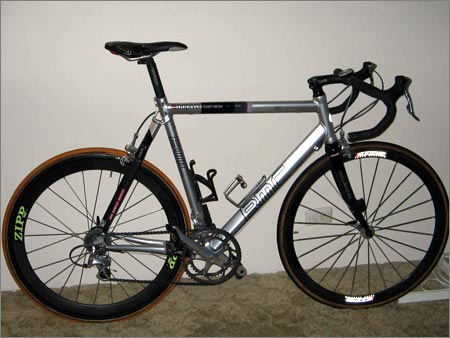 I’d been looking at getting a good set of race wheels for a while, but I never had the funds or energy to do so – but then one day it came to me. After tripping over my track bike in my bedroom for the millionth time, I looked up from the floor & saw a vision… well actually I saw an unused track bike with some very nice, but old Zipp carbon wheels on it. Now, what if I made those track wheels into road wheels?? 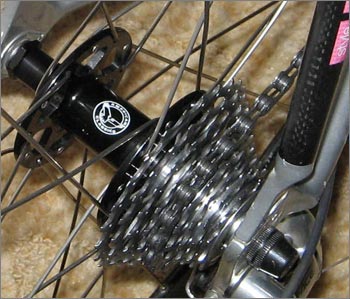 And every new set of wheels needs a nice new hub…

I just had to cut out the track rear hub & lace it up with a new road hub, right? So it was off to the bikeshop and one brand spanking new American Classic hub later, I was riding out of there looking and feeling sharp. [Always key for the PEZ-Crew – .ed] Now, I’m not one to really rave about equipment – but I can honestly say that these wheels made a HUGE difference.

I’ve never spun a wheel like my new rear wheel only to have it keep spinning for seemingly ever. My bike would just roll and roll and the next week at the local race it felt sensational. No more wins or anything, but I had a good ride & more importantly I (I mean the wheels) looked good…

Aussie Rule Football Star tackles Cycling
Ok, so that was the race wheels out of the way, I’d also sorted out my leg problems with a minor positional change so it was time to get back to the base-mile sessions. Turning up at the meeting point one morning I was surprised to see Jason Akermanis, probably one of the most famous Australian Rules footballers ever, turn up to have a ride with the group. 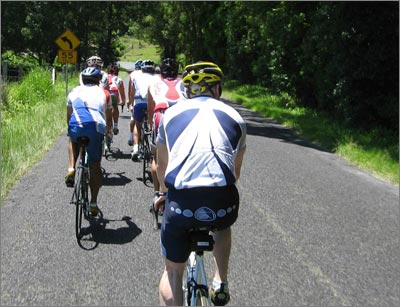 Aussie Rules Football star Jason Akermanis joined the boys for some training – and hung in nicely here at the back – just ahead of photographer Seldo!

Now for those of you who aren’t either Australian or Irish you wouldn’t know Jason Akermanis, but he could probably be described as the ‘Michael Jordan’ of Australian Rules Football (AFL) – in well known status that is. Every Australian knows him & either loves him or hates him depending upon the team you follow. Now AFL is a sport of running, tackling, kicking & catching the ball, all done at a ferocious pace played out on a large ground. I knew an AFL footballer would be very fit, but turning up for a 130km ride with a few pros & good amateurs through the hinterland on a 35degree summers day? The man is either brave, stupid – or possibly both…

Well I managed to find myself next to Jason for about 20kms in the group & I was able to determine the man’s sanity for myself. I actually found him to be a very interesting guy, with some poignant views on life, training & mental strength. You have to admire a guy who can push his body week in, week out against all odds and still be at the top of his sport, year after year. I’m glad I talked to him when I did though, because after our 20km chat there was a 3.5km climb & all chatting came to an end – it’s hard to talk when you’ve hit the wall! I’m sure a lot of opposition teams over the years have wanted to shut Jason up & I have finally found the answer – Long rides!

He still had enough energy to say to me though, “check out my new book – Aka, The Battle Within”. Well to PEZ readers out there, you can check it out in Australian bookshops or online retailers to learn more about such an interesting guy. It doesn’t matter that he’s not a bike rider, some stories are just inspiring so it’s certainly worth a look, whether you know of AFL or not.

Will ‘Aka’ be back for another ride with the group though?? Well that could be another story… or maybe a chapter in a new book.

Chris ‘Seldo’ Selden is a 27yr old Australian who’s been racing bikes since he was 12yrs old. Chris races in Switzerland riding for the amateur Team PROF/Fluckiger Electricite SA, and in Australia for Team Bruce Lynton BMW/Goldstars during the Australian summer.