The ranks or the PEZ foreign legion of Homies, Blokes, and Crew continues to grow, as today we welcome our newest PEZ-man, direct from deep inside the ranks of the Swiss amateur bunch – give it up for… Aussie Chris Selden! Chris will frequently regale us with his tales of racing and life, as only a mate from down under can…

The Race From Hell
We’ve all had one right – and when I think back on past races, which one’s stand out the most?? The podium finishes or the races from hell?? For me it’s the races from hell. Maybe because there seems to be more of these… 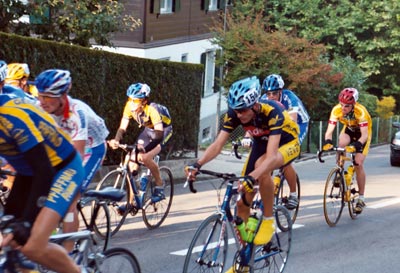 That’s Chris, on his way out the back door…

Whether you’re a pro or an amateur everyone’s had one, some just stick in the memory, others scar you for life. My scarring experience was the 41st Gp de Lausanne, Switzerland 2003. Leading up to the race I had been in excellent form with some top 10 placings & I approached the race full of confidence.

However, there’s nothing that racks the confidence more than getting dropped in the first lap of an 8 lap race! Yes, the back door of the peloton opened and I didn’t just walk through it, I ran. My legs were screaming over each & every one of the very short, steep climbs that punctuate the course & my mind was also screaming – what’s going on? I’m on form, but I’m being dropped!! 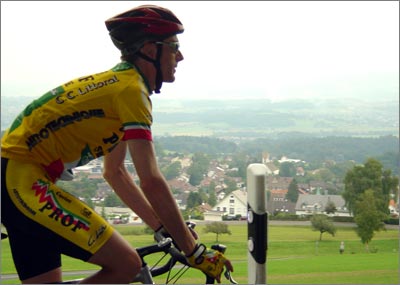 Living in Switzerland,Chris bathes in and soaks up this kind of riding every day.

I composed myself somewhat on a short descent & rejoined the peloton, only to be dropped again on the next climb. This pattern of being dropped & rejoining continued for the first 3/1/2 laps of the race until the gap grew just a little too large after one of the hills & I was never to see the peloton again.

Coming through the start/finish line on the 4th lap, already down on the peloton & with no hope of rejoining I did, for me, the unthinkable. I pulled out.

Nobody likes a quitter & I wasn’t very happy with myself. But as a coach once told me, “you must learn from your bad performances”. So instead of running away from the race I will once again line up this year for ‘the race from hell’ in September. For some reason the organizers continue to call it the ‘Gp de Lausanne’ but ‘The Race from Hell’ really is a much more accurate description. With hardly a metre of flat road & climbs that don’t just bite, they attack – it will once again be a true test of the legs & will. 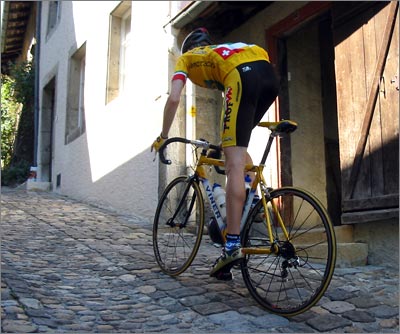 After last year’s effort I can see why many previous winners have gone onto illustrious pro careers. Will they be adding the name Selden to the champions list this year?? Unlikely. The finisher’s list? Definitely! Whether I have to ride, walk or crawl to the finish I will erase my demons from last year.

And that, after all, is the important thing. Improvement. Sometimes it’s hard to come by, but it’s what we are all striving for in the end – or hoping for… Here’s hoping!

Good luck to all in your own ‘Races of Hell’ out there. And stay tuned for my report on the final outcome of this year’s race!

Chris ‘Seldo’ Selden is a 27yr old Australian who’s been racing bikes since he was 12yrs old. He’s raced every discipline from track to MTB but his real love is road racing. He grew up in Sydney racing in the junior ranks and getting his ass kicked by riders like Brad McGee.

After progressing into the senior ranks he left the competitive side of the sport for a few years before moving to the mecca of cycling in Australia (Gold Coast) where he was encouraged to start racing again. Seven months later he was back racing, but now getting his ass kicked by riders like Robbie McEwen, and soon followed this with a move to Europe where he now gets kicked by riders of all nationalities.

Chris is in his 2nd season in Switzerland riding for the amateur Team PROF/Fluckiger Electricite SA, living in the heart of the Jura mountains and only a short drive away from the Alps & France. Living in the mountains has taught Chris the finer points of how to impersonate a the climbers, but his real strength has become his crazy descending as he frequently chases back onto the leaders after the cols.

While in Australia Chris races for Team Bruce Lynton BMW/Goldstars as he competes against locals, and visiting Australian and European pros who make the Gold Coast their home over the European winter.

So, until director sportifs deem that joke telling, guitar playing, crazy descending and story telling are essential attributes for a pro in their team, Chris will continue to enjoy getting his ass kicked in the amateur peloton & reporting on his efforts & travels.

The Tour of Courage: How The Journey Began